"I did something, very, wrong

all i got so far

That is so much more than I could make out. I think this is where Bash told us it would take work.
- Ben/Bapperson/Bappy
Top

I gave it a listen, and I heard "I did something very wrong. I hid these messages (betwixt? Between? I couldn't make this out) so many numbers. I hid (gibberish) (in the people?) (More gibberish) I hid it in them."

Have you guys lookd at resident IDs? Maybe there's something in there?
Top

I think you're right with the 'I hid these messages' and 'I hid it in them.'
Top

I believe the resident ID's are the key from this point til the next. The message (as far as we have been able to gather) references this person changing numbers in people, or something similar. This could be referencing the Resident ID changes that took place, taking off the letter prefix and last digit of everyones ID number.

So far this is what Bappy has been able to put together. 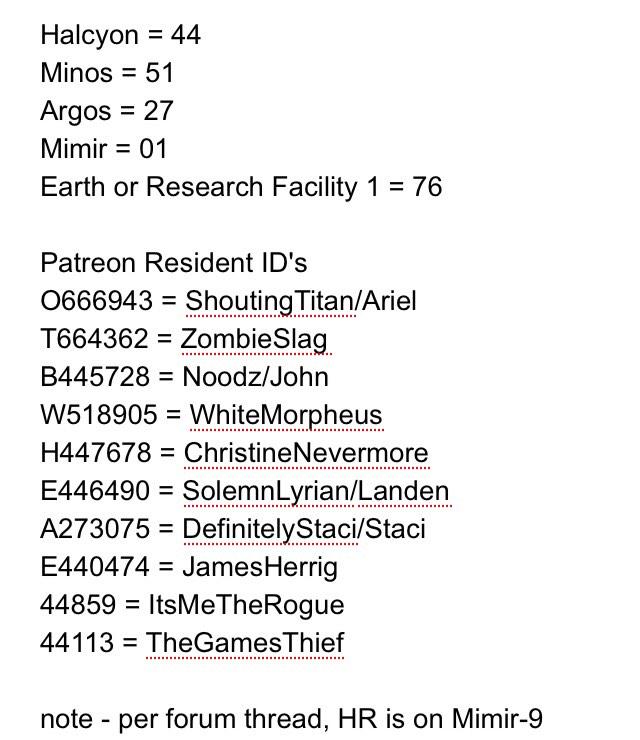 
Additionally, from the Sayer ID thread

SAYER wrote:Thank you for notifying Ærolith Dynamics with regards to these nonconforming resident identification numbers. The HR department on Mimir-9 is investigating a potential file corruption issue in their centralized personnel files. HR Director Corinne Vasquez has issued the following statement:

"Our assignment system is flawless. A small group of residents claim they have been referred to with nonconforming ID numbers, but it is far more likely they are suffering from some form of mass hysteria.

Allow me to make this crystal clear: it is entirely impossible that several residents across 4 towers were referred to with aberrant identification numbers. Anyone claiming evidence to the contrary should be directed to the closest available security office; forcefully if necessary."

Also, the letters that were taken away as listed in the img above spell "O What Bee"

O What Bee is interesting, however there are probably quite a few residents that had letters that didn't post on the forums.
And as there are quite a few residents who didn't post on the forums I don't think you'll get very far investigating the numbers, unless it's a general thing with the numbers rather than decoding the actual numbers themselves.
Top

I have to imagine it's got something to do with the prefixes, also, the amount of digits in each one. There was an episode where resident numbers were listed and they were 3 digit, that has to mean something. I'll look in my notes and post it here later.
http://www.twitter.com/zombieslag My place of tweeting
http://www.twitter.com/fireflypodcast My podcasts tweetland
http://www.fireflypodcast.libsyn.com My podcast
Top

So, I was bored in rehearsal, had no reason to pay attention to what was being worked on and I decided to look at this Sayer stuff again. I saw on twitter that Steph looked up Aristaeus, who is credited with discovering bee-keeping. That made me curious about what the other towers meant. From my quick googling, these are the potentially relevant links:

The response in the Ask Sayer thread mentioned four towers reporting false IDs: Aristaeus, Minos, Argos, and Halcyon. All four of their names come from Greek mythology, and yet Mimir is from Norse mythology. I feel like that has significance, if not in this puzzle then in the world at least.
Top

This is extremely interesting. It makes me wonder, Where's "Zeus"? Sticking with the Greek, it makes sense.

Bappy, the episode they are refered with 3 numbers is the episode of the human body disposal in wich the bodies regain life.
You know, that girl, the perfect rogue next door.

BTW, I Always thought there would be something on the numbers, but I never could put my mind over it because I never got enough residente numbers. We could ask people for it. The more data the better.

God, I need to watch more episodes of Numb3rs.
You know, that girl, the perfect rogue next door.

Users browsing this forum: No registered users and 2 guests