I’m piloting my tiny spaceship through the darkest reaches of space when the aliens appear.  They’re pixelated and their movement is slow and mindless, but inexorable.  If I don’t snag all the upgrades I can, my ship will be underpowered and I won’t be able to escape with my life.  I defeat a boss, but there’s no rest and they keep coming.  It takes all of my skills as a pilot to avoid being destroyed while dealing damage to the aliens trying to blast me to space dust.

Taking a step back, I recognize that while my situation brings to mind an old-school shoot-’em-up like Gradius, I’m playing this scenario out on a tabletop game in my kitchen.  The game is Inglorious Space, and it attempts to bring the “tiny spaceship vs. hordes of enemies” motif of old-school shoot-em-ups to board gaming.

Inglorious Space comes from Black Table Games, an independent design company run by Jesse Gregory, known to Geekly readers and listeners as the creative mind behind the music of SAYER.  Gregory, and Black Table are currently running a Kickstarter campaign to support the production of Inglorious Space, that ends in just over 16 days. I had the opportunity this past week to play a preview copy of  Inglorious Space, and here’s how things went. 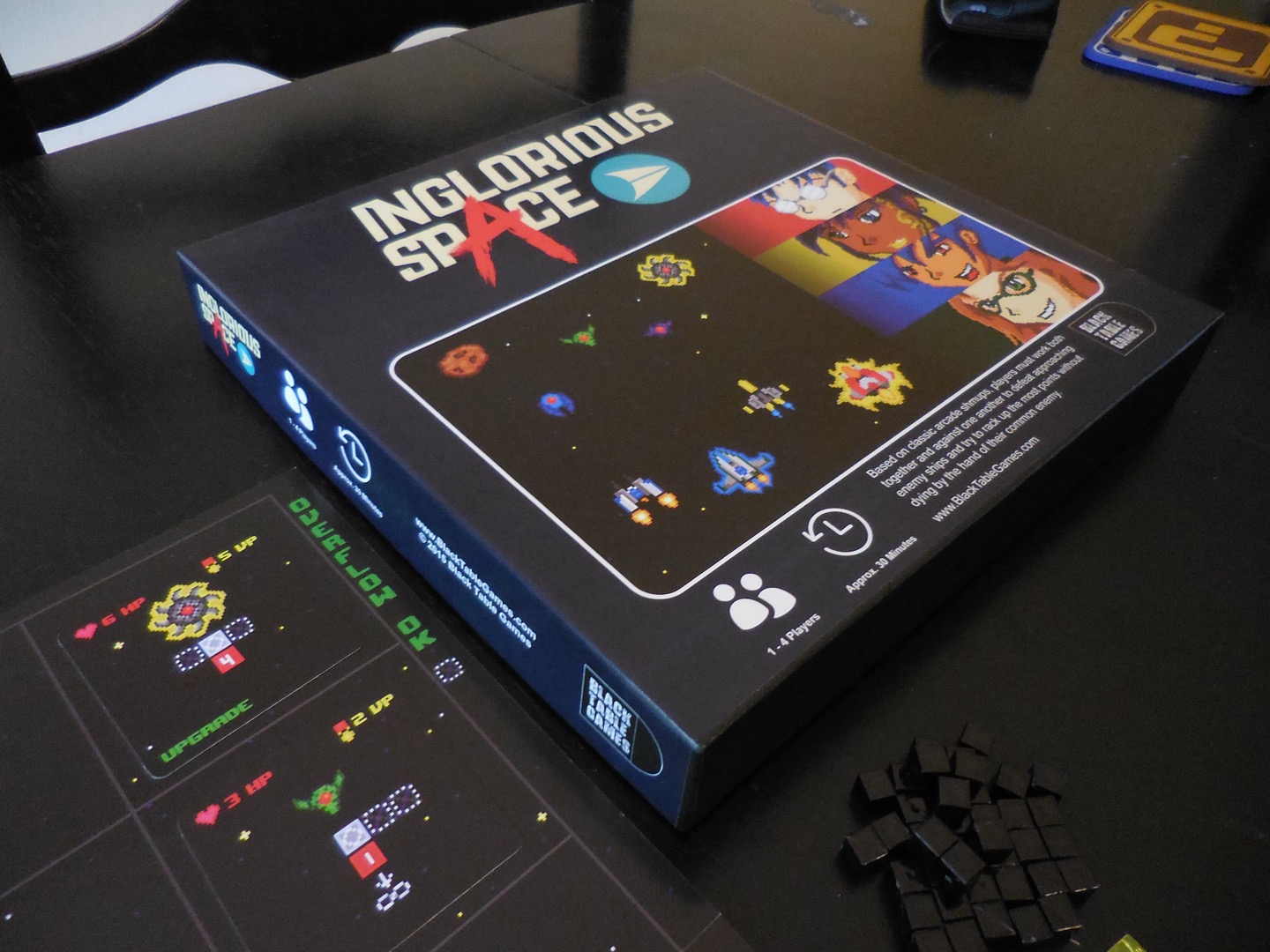 I loved the artwork immediately.  As an old man, the pixelated graphics brought me back to a time when there was no saving your game, when game slowdown could either be a help or a hindrance depending on what you were playing, and when I wore my socks pulled up to my knees.  Bottom line-the art is great, and that greatness continues throughout the rest of the components.  More on that later, but suffice to say my sense of nostalgia was firing on all cylinders.

Inglorious Space can be played by 1-4 players and games can last anywhere from 30 minutes to an hour depending on how your luck plays out.  I played the first time around with my 7 year old son, who was thoroughly impatient with his father as I attempted to read through the manual.  As with most games, it was a struggle to acquaint myself with the jargon and things felt a bit complicated during my first read-through, but,  after playing a few rounds things clear up. By the second game I had the process down pat. 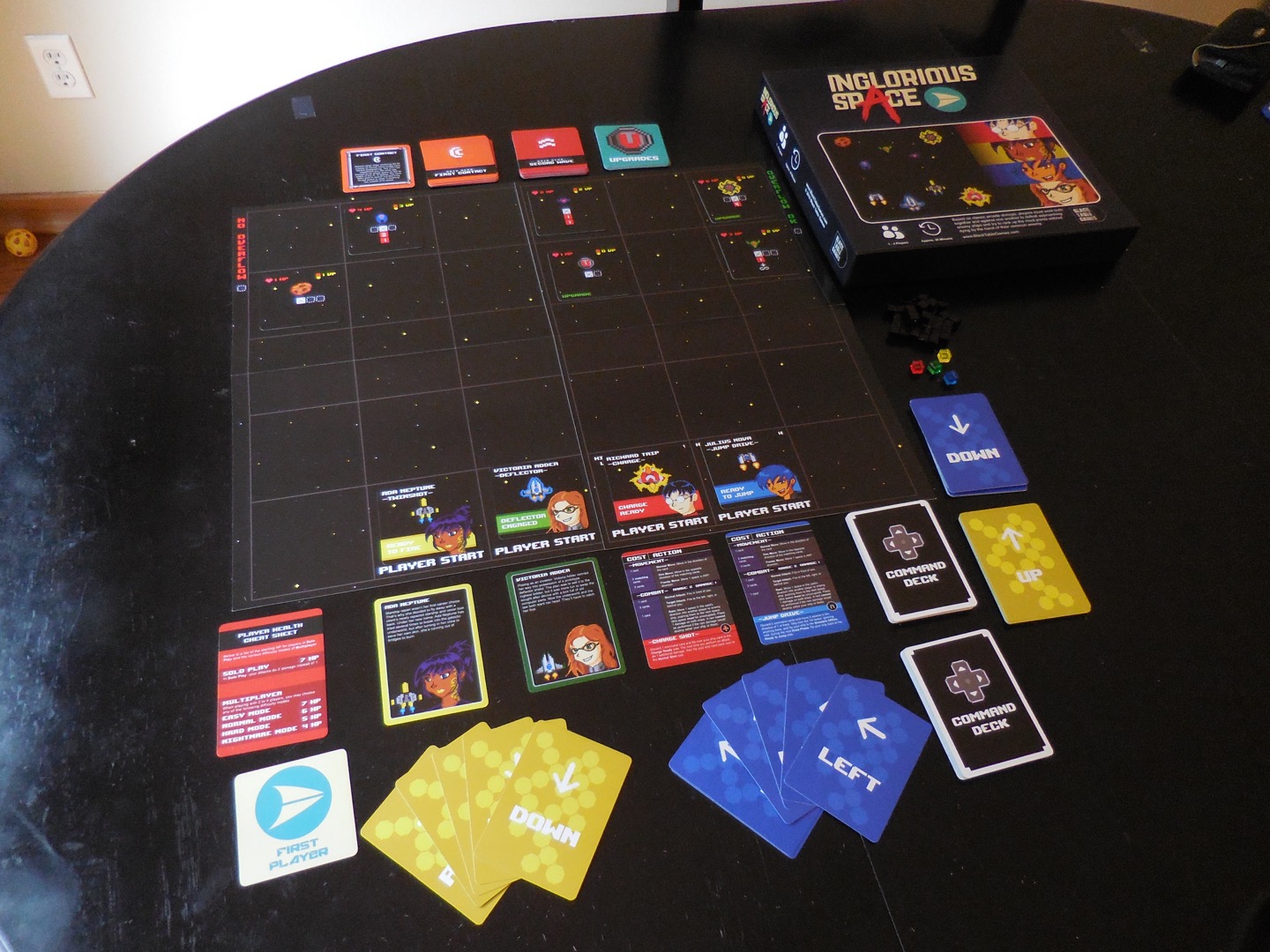 Check out the Space Mat all set up!

The game is played on the Space Mat, and the goal is to earn the most Victory Points by either killing bad guys or (if you’ve died) creating havoc for the other players by laying traps around the board.  Bad guys spawn at the top and creep slowly downward each turn they’re left alive, attacking in a specific grid pattern.  If your ship ends up on an attacked grid space, you take damage.

Each alien is crafted in the same pixel style that made me love the box from the start, and it was a lot of fun to see what would turn up next.  Enemy cards show HP, Victory Points earned by defeating it, attack map and whether or not you’ll spawn a sweet upgrade by killing it.

You’ll choose from 1 of 4 distinct pilots to play as, each has his or her own backstory and special abilities, ranging from deflector shields to jump drives to special attacks.  The game is played in Rounds, with each player taking turns performing 1 action at a time.  Actions can include moving, attacking, charging a special ability and ramming bad (or good!) guys with your ship, and all actions are performed by discarding Command Cards in different amounts and combinations.

Kill some aliens, get some Victory Points.  If you have the most VPs after the final wave is over, you win! 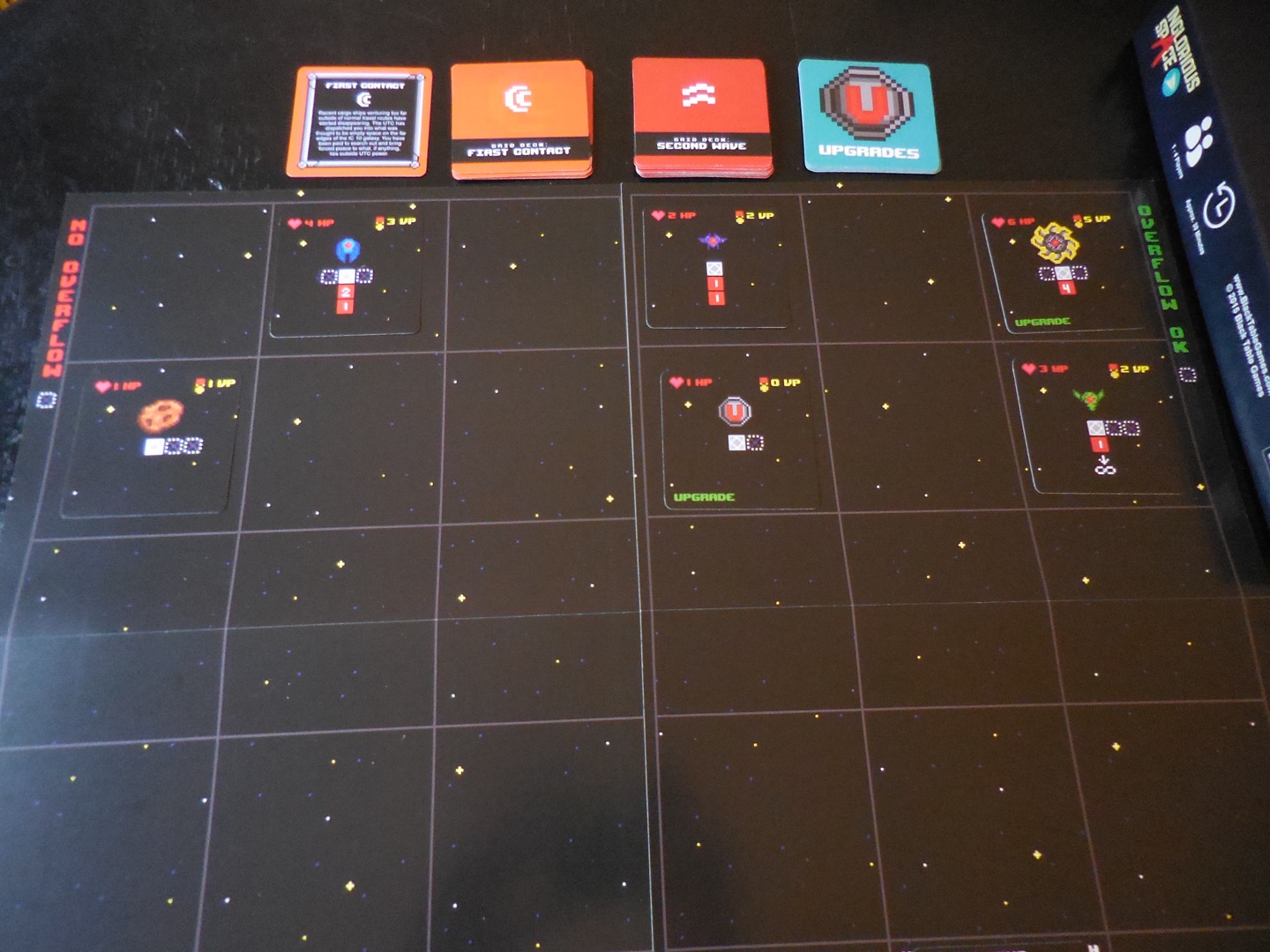 My son told me that he hated the game once we finished, but then amended his answer to say that it was because he died.  In actuality, he loved flying his spaceship around the board killing aliens, stealing upgrades from Daddy, and racking up Victory Points.  He also loved the mechanic that allows a player to keep playing after death.  Once you’ve died in Inglorious Space you lose your points and your ship, but then become a minelayer.  That’s right; you’re now responsible for setting out moving mines in the darkest reaches of space.  Your mines move after everything else has been resolved that round, and if you manage to hit a living player, they take damage and you win Victory Points.  The mechanic works better the more players you’ve got, as a more crowded board makes it

increasingly difficult to avoid the mines, but he had a lot of fun trying to ruin my game.

I played a few more rounds to flesh things out-including a solo game, a round with folks from work and another round with my son and wife.  By his second game, my son was keeping a better eye on the rules than I was, and had figured out the strategy for the game, telling me that Inglorious Space is quick to pick up and simple in its execution.

My solo round was a great exercise in “resource” management, with the resources being the limited amount of moves/actions I received each turn.  I found myself in a very quiet, very concentrated, almost-meditative state trying to maximize the never-enough moves and actions I needed to defeat the alien hordes. 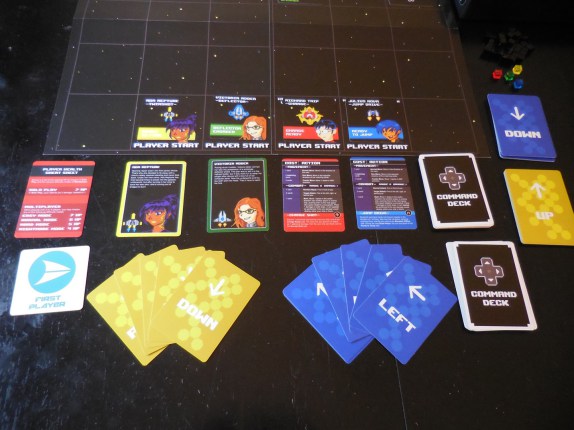 I enjoyed my playthrough of Inglorious Space, and enjoyed the novel approach of its design.  It triggered a very specific part of me that’s tied to my childhood, and I felt that same rush I got in the 80s after popping in a new NES cartridge for the first time.  I always love a game that pits me against the game mechanic itself, and Inglorious Space did a wonderful job of playing with my emotions-from shaking fists when a rough set of bad guys spawned, to fists-in-the-air excitement when I used my special ability to its maximum potential.

Inglorious Space will make a great family game- as my son’s quick success will attest.  He was able to very quickly get the hang of things and have success that wasn’t predicated on daddy or mommy giving him strategy hints.  He lost both times, but it was closer than I’d like to admit.

My advice: check out the Kickstarter links below and toss some money towards Inglorious Space.  Jesse and Black Table Games are asking a very modest amount of backing in order to make this game available to a wider audience.  It’s quick and easy to learn, quick and easy to play, and will develop into a deeply strategic game to play with your friends after a few getting-to-know-the –game sessions.  There is a lot of strategy to explore with Inglorious Space– and I was only barely able to scratch the surface of the treachery and backstabbing that’s possible within the game.  For example (and I’m both proud and ashamed of this move at the same time): My wife was in position to work in concert with me to take down one of the bigger baddies.  We were trading off on our turns pew-pewing away doing one point of damage at a time, eeny-meeny-miney-moe style.  Doing the math told me she would get the last hit, and thus the Victory Points.  Since I’m a scumbag, I moved on my turn instead of attacking, she attacked as planned, and I swooped in the next turn to grab a sweet 5 VPs.  I foresee much more Inglorious-ness in this game’s future, and am excited to play the selfish dread pirate I’ve always wanted to be.

You can check out Black Table Games at http://www.blacktablegames.com/, and visit the Inglorious Space Kickstarter campaign at https://www.kickstarter.com/projects/blacktablegames/inglorious-space