I had my qualms about a new Continental novel from the perspective—and foul mouth—of General Turyin Mulaghesh. Not many, and not severe, since Mulaghesh was awesome. But she was not the stars of the previous show, the fantastic City of Stairs. Who can compete with Shara and Sigrud, a brilliant spy and a Viking bodyguard duo?

Well, Mulaghesh can. Now she can, anyway. City of Blades gives her all the opportunity she needs to shine as much as the previous protagonists, albeit in her own way. Which involves a lot of cursing and drinking and bitter reminiscing. The general is pulled out of her island paradise retirement in order to do a bit of spying for Shara, who is now the embattled Prime Minister of Saypur. Mulaghesh has no training in espionage and no particular desire to wade back into the affairs of the Continent. Fortunately for us, the Prime Minister is persuasive. 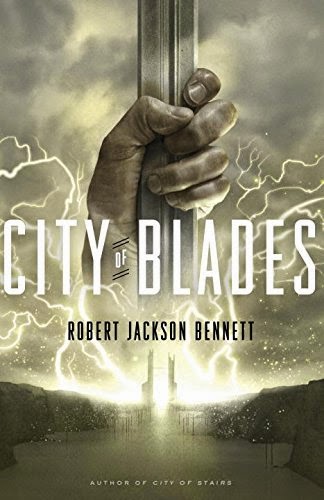 Thus it is that Mulaghesh, grumpy and reluctantly sober, finds herself in Voortyashtan, former demesne of Voortya, the goddess of war and death. Voortya is definitely, undeniably dead herself, but old habits (and gods) die hard, and her adherents are still eager to fight everyone and everything. They are especially displeased with the Saypuri soldiers stationed near the city, there to enforce Saypuri rule. Tensions are perpetually high, and now there are whispers of the divine are surfacing. Something is at work in the mines, in the bay, and in the city. Something that drove the previous operative mad.

What I love about the premise is the entirely new way that Bennett finds to make a credible threat from the potentially divine, even though we know from the outset that the gods are dead. I won’t spoil the surprise(s), but this is absolutely an avenue worth exploring. The world is still so rich and textured, too, full of politics and people that feel profoundly (and sometimes unfortunately) real.

Part of this is the not-so-subtle allusions to real-world conflicts, and part of it is the characterization. Each person is distinct but not a caricature, reasonably motivated, and is also reasonably inclined to do moderately stupid, self-serving things. No one takes ideal actions here. And–get this–most people have a sense of humor. This is so lacking in most books and especially most epic fantasy, either entirely or because there’s one token “funny” character. Life is strange and overwhelming, and sometimes you have to cry. But sometimes you also just have to laugh.

This book made me do both. I sprinted through it, staying up late and getting up early just to cram in a few extra pages. Bennett knows the art of the page-turner, combining a compelling mystery with plenty of action so that the story is always moving forward, even when characters are discussing the distant past. I’ve never seen another author use down time so well—the times that other authors would never bother to detail are the times that Bennett does his best character development. When Mulaghesh and another character take a journey by boat to a distant island, instead of giving us pages of boring details on jib sails and proper knotting techniques to prove he did his research, he has the characters talk to each other. They finally reveal certain secrets about themselves in a way that doesn’t force everything to grind to a screeching halt, and he gives us just enough to feel the heavy, heavy weight of those secrets before the characters have to head off to complete the next stage of their quest. It’s damn near perfect, the way he infuses everything with more and more depth at the same time as he’s ratcheting up the narrative tension.

This makes the last quarter of the book brutal. And I don’t just mean in terms of violence, although the action sequences are wild. No, Bennett brings it all together, the wildly disparate pasts and philosophies of each character, each who does unbearable things for—they think—the right reasons. And while the ending attains that elusive goal of being “satisfying,” it’s also heart wrenching beyond anything I ever expected. You feel terrible for every single one of the villains while still rooting for the protagonists, for whom you feel even more terrible. This is all in keeping with Bennett’s ultimate conclusion: that war is a terrible thing. This isn’t just some platitude to Bennett or his characters. This is agony. In one way or another, all of the characters are death-dealers and soldiers, obligated to contend with the reality of violence and not merely the idea of it. They have only the choice of bad and worse, and only the bleak memories of other bad choices to guide them.

Yet—because of Bennett’s consummate skill—there is hope. Even for war criminals and colonialists, who are not your usual cast for a fantasy novel. Such topics can go badly wrong, but they also must be talked about. We are entering an era in fantasy when we can no longer be content with hordes of innately evil monsters facing off against paragons of virtue. There must be complexity, and hard looks. Thankfully, Bennett is more than up to the task.

City of Blades finished the job that City of Stairs started: I am now a lifelong, slightly rabid, entirely devoted fan of Robert Jackson Bennett and of anything set in Saypur or the Continent. Charge me exorbitant sums for limited editions, make me queue hours just to mumble hysterically about how much I love your work as you scribble something resembling your name on a page, make me write letters campaigning to have your books optioned by HBO—I don’t care. I am a fan, and to everyone else reading this: you should be, too.