The theater was filled with sweatshirts and ball caps labelled Marvel. Avid talks of comics, Steve Ditko, and psychedelics snuck through the aisles like whispers of dark and ancient secrets. “Have you read The Omen? They call Doctor Strange Sherlock in that one. Probably why they cast Benedict Cumberbatch.” “Why is Tilda Swinton the Ancient One? She’s not Tibetan!” These were my kind of people.

The IMAX theater opened with rising excitement for new movies and trailers. Transitions between them to the movie, as well as the kind notes telling us to “Turn off your phone” and “Don’t bring your own commentary” were illustrated in blasting sound waves and puffs of galaxies. A silent wind of watoomb swept our seats.

Doctor Strang is not a good Marvel movie. It’s an amazing movie all on its own. Being a part of the Marvel Movie Universe only enhances it. The pacing was something I’ve always wanted in recent films, plenty of fast paced action with time to breath in-between. Moments where you can let what’s happening settle in. The montages – it’s an origin movie, there’s going to be montages – were smooth and effortless. Tilda Swinton, who plays the Ancient One, and director Scott Derrickson say they were inspired by The Guardians of the Galaxy film and how it could stand alone and reveal a new world different from what we had been shown in the other Marvel movies. 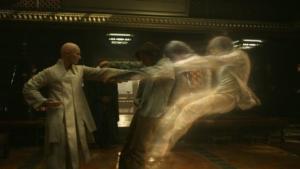 The pacing was astounding on this magic carpet ride. Derrickson clearly laid out a three act story that has you feeling as desperate for more. The artwork was heavily relied on and inspired by Steve Ditko’s original artwork. The trippy comics first appeared in the early sixties personifying the import of mysticism and acid. The film, however, doesn’t retain that hippy vibe. Derrickson has said that the technology used to make this film didn’t exist two years ago, let alone 20. I personally haven’t seen a film with such crystal clarity and meant that in its fullest intent.

The film is absurdly relevant to today in such simple ways. I won’t spoil it for you, but I’ll tell you that Doctor Strange begins his journey hitting close to home for everyone. His medical practices, attempts at finding a cure and WiFi, were familiar and refreshingly simple. There was no nudge from the comedy. No hesitant moment to say, “Eh? Ya get it?” Each modern reference or slapstick piece of humor was deftly handled, as has become the mantra of Marvel films. There are hints of The Three Stooges and Abbott & Costello that toss the humor quick as a firecracker and it’s gone, letting the story move on quickly.

Benedict Cumberbatch did a fantastic job playing a Philadelphia born and egotistical neurosurgeon. From his work as Sherlock, we might have expected him to pull off the ego, but his performance was entirely different. His confidence, cockiness, and swagger was prominent to make a somewhat likable jerk who we quickly realize is not as likable as we had hoped. Cumberbatch showed fantastic vocal talent as well, throwing himself into an American accent.  His r’s are a little harsh and his ou’s might be a bit forced, but overall, it only adds to Strange’s commanding presence and eccentric personality.

That’s not to say the rest of the cast wasn’t as astounding as Cumberbatch. I didn’t recognize that dangerous Mads Mikkelsen as the villain Kaecilius or Rachel McAdams as the caring Christine Palmer. Their costumes and makeup were so well constructed that they appeared naturally a part of Strange’s world. Benedict Wong plays a larger and more discerning Wong than I expected, much to my delight, as the straight-man of the Strange-Wong duo. Chiwetel Ejiofor is a powerful actor as Mordo. He trains the soon-to-be-sorcerer in combat and brute magic while showing the utmost empathy for his friends. His emotional transition through the film moved me more than any other. 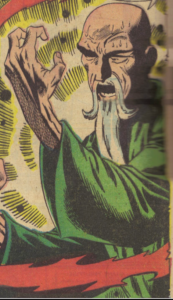 On a final note, Tilda Swinton plays the controversial role of the Ancient One. Traditionally, the Ancient One has been a Tibetan monk older than a millenia. When Swinton was announced as the casting choice for the Ancient One, fans and hopefuls were quick to accuse the film of white washing. According to interviews by Radio Television Honk Kong (RTHK), a screenwriter has been quoted as saying the choice was a pragmatic one. If they were to cast a TIbetan as the Ancient One, the movie could be banned in China. Tilda Swinton and director Scott Derrickson say otherwise.

“Nothing about it was pragmatic,” said Derrickson. “It was all creative, and that’s the honest truth. It was a decision that I made because in the comics, that character was a bit of a racist stereotype, and I was looking for a way to avoid that. And I first wanted to make it a woman. I also didn’t want to have it be a “Dragon Lady” kind of character which we’ve had a lot of in American cinema.” 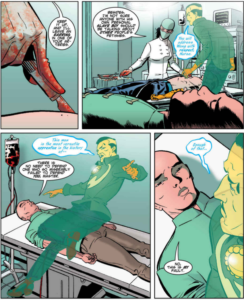 Swinton added, “Scott Derrickson and Kevin Feige wanted to make a film that was entirely inclusive and diverse. And they didn’t want to include any stereotypes like, for example, the ancient Asian man or the ancient Asian woman.”

You can find the RTHK interview here and the YouTube equivalent here.

Derrickson and Swinton hit on an interesting note. Asians have been exploited in American cinema since the era of Bruce Lee and, even moreso, in science fiction. William Gibson’s The Man in the High Castle doesn’t escape these stereotypes, forcing characters who don’t appear to have strong connections to Japan be forced by some ancient sense of duty to perform terrible deeds and punish others as well as themselves. The fascination of the unknown and vastly different cultures from Asia evolved into what some now call Techno-Orientalism.

To better break down the position Derrickson was in, let’s take a deeper look. In July 1963, the Ancient One appears in Strange Tales #110. He appeared as an old Asian man with mystical powers and magical knowledge while sporting a “Fu Manchu” mustache and beard. It was the time of the Vietnam War and acid. WWII was still a fresh memory and the focus on Asians as a threat to America had moved to Communism. It was a simpler time. A time when Mickey Rooney could appear in Breakfast at Tiffany’s in yellowface and get a good laugh. Seductresses meant to thwart white heroes were called Dragon Ladies. And the Oriental Monk was becoming a fast stereotype. 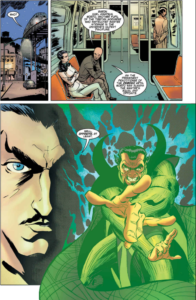 Jump forward forty years. Lucy Liu faces criticism for perpetuating stereotypes. She said, “when you are just starting out, you don’t have much choice about the roles you get to play” (Prasso, 2005).

So how does Derrickson escape this Harry Houdini of a trap? He decides to not include Wong, then relents. “I’m certainly not going to be the tea-making manservant,” says British actor Benedict Wong, “We’re heading in a different direction. He’s more of a drill sergeant.”

Derrickson said more on his choice for casting Swinton, “Asians have been whitewashed and stereotyped in American cinema for over a century and people should be mad or nothing will change. What I did was the lesser of two evils, but it is still an evil. Plus we changed Mordo from white to black and I look at it all and think, ‘Yeah, I got that right.'”

Derrickson was put in a tough spot directing this film. There was no way for him to win. He plans to make Wong a more significant member of the Marvel Cinematic Universe. He plans to keep hiring a diverse cast of actors. The only fault I see him at is hiring four British actors and a Danish actor as the heroes and villains with one American actor as the damsel in distress. But hey, it’s a freakin’ awesome movie. Go see it.