Have you ever thought to yourself that you really love “Munchkin” but don’t think it has enough drinking for your tastes?  If so, fear not, my friends, because “Drunk Quest” is for you!!  This card game mixes the ease and fun of Munchkin but will harken back to your college days of binge drinking in a frat basement…wait okay scratch that last part.  In any case, there is no way you will be walking away disappointed with this game…or actually walking if you play it right.

So let’s sip our way into the rules, shall we?  You can play “Drunk Quest” with 3-6 of your closest liquor imbibing friends. Game play generally takes 30-60 mins to play, depending on how “hard core” you play (but more on that in a minute).  The basis of the game is that you have 1 hero card, 5 treasure cards, and 1 realm card.  Your hero card gives you 2 types of abilities that you can use on your turn based on your class, whereas your realm card gives you a bonus based on the whole round.  The treasure cards are, well, just like they sound, treasures that you can use to combat the monsters, gain permanent items (if you have them) or increase/decrease the drinking level of the encounter.  On each player’s turn they can use their hero ability, draw cards, or put down a treasure card to boost/augment the monster being played.  Once each player has had their turn, it returns back to the original player whose monster you are fighting.  When this has happened you add up all the boosts to the monster’s level and any negatives that might have been played.  This number will give you a total for how much you have to drink.  It isn’t uncommon to have the number of drinks you have to take be over 20 (I want to say the highest I have personally taken was around 40 which is almost the equivalent of two beers..so yeah).  Like I mentioned earlier, it is really easy to get really drunk while playing.  If you want to use house rules for some things to save your livers and your stomachs, that is totally understandable. 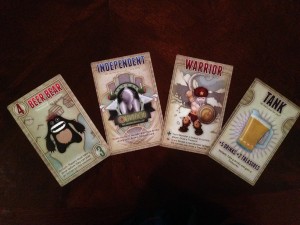 Overall, why should you play “Drunk Quest”? For one, if you have never played any sort of card game like this (ie. “Munchkin”) or have always wanted to dabble in RPGs, this is a great way to get started.  The rules are really easy and by the end of the game you might not even remember not liking it..if you don’t, that is. So order the game here and check out the new expansion, “The 90 Proof Seas.”  This is the card game your liver will hate you for…but I promise it is worth it.