What if you could use any kind of magic imaginable for one night. How would you use it?

When Studio Ghibli closed their doors in 2014, Yoshiaki Nishimura (西村 義明) felt the urge to create a new studio. As producer, he and Director Hiromasa Yonebayashi (米林 宏昌) came together to continue the stylistic traditions they’d learned at Studio Ghlibli. They named their new studio Ponac, from the Polish “ponoć”, meaning “midnight”, the start of a new day. And in the darkness before dawn, as the first hours of their new day tic toc, they’ve released their first feature film, Mary and the Witch’s Flower. It’s based on The Little Broomstick by Mary Stewart, an author famous for strong and bold female leads in romantic suspense novels. It’s the perfect material for creative hands that were trained on films such as Howl’s Moving Castle and created When Marnie Was There.

Inspired by England, the crew traveled to the British Isles for location scouting. Nishimura was inspired by Isao Takahata (高畑 勲) and Hayao Miyazaki ( 宮崎 駿) doing similar scouting in the Swiss Alps for their early work Heidi, Girl of the Alps. Mary and the Witch’s Flower is absolutely a beautiful film. The scenery is meticulously detailed. As with any Ghibli animation, Ponac has maintained the awe of displaying new and familiar worlds. From the misty forests of England to the mysterious and bustling magic school, Endor College. Nishimura and Yonebayashi are adamant in not presenting evil to children. Even so, there are hints at the darkness of each location. Strange humanoid creatures at the college. Patches of death and overgrowth in the forest. There’s something lurking around every corner, which might be more sinister than the creators had in mind. As though the darkness is so well adapted to appearing kind and misunderstood or sympathetic that it can be mistaken for natural. 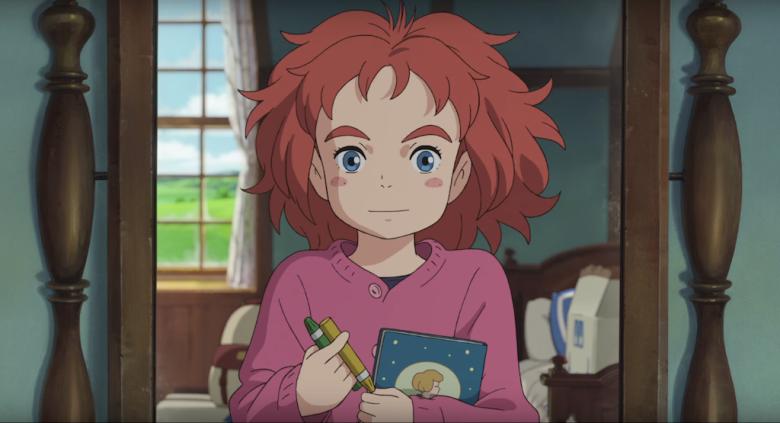 Hana Sugisaki (杉咲 花) voices Mary in the original Japanese cast. She’s worked with the creators before as Sayaka from When Marnie Was There. Ryunosuke Kamiki (神木 隆之介), well known for dozens of performances including the lead in the latest hit Your Name, played the other child character, Peter. It was interesting hearing their voices coming through the characters. In English dubbings the actors normally match the characters’ ages. Mary and Peter were a little lower in their voices than I expected, but soon forgot. They did a fantastic job with the material, regardless, and created characters I believed. Still, it made me wonder if I had made the right decision to watch the sub rather than the dub. Unlike Ghlibli, Studio Ponac is not partnered with Disney, but with GKIDS, a “sophisticated, indie” focused distributor. So I was surprised to see the voices of Kate Winslet and Jim Broadbent portraying the professors of Endor College. Even with Your Name I’m more of a sub than a dub viewer, but with Mary and the Witch’s Flower following so closely in Studio Ghlibli’s style, I wonder if I’d like the other more with child actors than adults.

The lead heroine, Mary, is an energetic and rambunctious girl. She runs around her new home with her great aunt looking for purpose. Again, there’s a hint at something darker the creators didn’t wish to touch directly. Several members of the house are attending a funeral and we never see Mary’s parents. The most developed character, the great aunt (who we rarely see), shows empathy, kindness, hope, and worry. I wanted more of her than anyone else in the film, because she felt like a whole person. Mary and Peter were painted faces of happiness in a world of danger. They felt false. Miyzaki once said, “Almost all Japanese animation is produced with hardly any basis taken from observing real people, you know.“ I wanted struggle from Mary and Peter. With the creators refusing to show darkness to the audience and only hint at it feels like a falsity. Mary only grows in accepting her hair. Otherwise, she remains almost the same as she did at the beginning of the film. Abundantly full of life. If the creators are coming from a background of comparing themselves to their work at Studio Ghlibli, then why haven’t they created characters like Chihiro or Sophie, who may be despondent, but fight to survive and find purpose in their struggle? Where are the real villains of loneliness, low self-worth, and fear of the unknown?

Mary and the Witch’s Flower is a beautiful imitation of a Ghibli film. It has all of the classic markers: a beautiful landscape, a female lead, flying, fast advancement of technology as an enemy. But it lacks the heart. Yonebayashi has created a movie with fantastic composition. The creators’ former musical partner in When Marnie Was There, Muramatsu Takatsugu (村松 崇継), created a beautiful soundtrack to accompany the beautiful drawings. These beautiful scenes were enchanting to watch, but the pace was slow and the characters were flat. I enjoyed the movie, I did. But Studio Ponac has some time to grow into it’s new day before it can create emotionally engaging characters like that of Studio Ghibli. 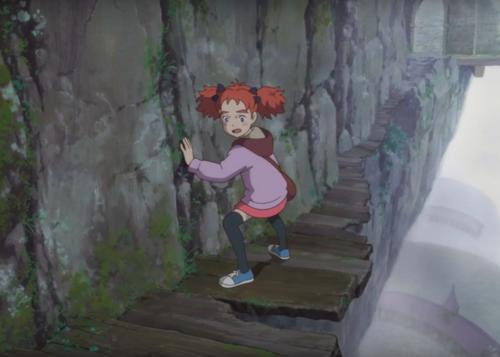