Apparently it’s music week here at Geekly, because after the punk-rock showdown that was The Unnoticeables, we now have Last Song Before Night, a decidedly different take on what happens when you mix magic and musicians. Ilana C. Myer’s debut—coming out today!—introduces us to a world of uneasy peace between the vast network of musician-poets and the royal family.

Long ago, there was magic. Poets alone wielded it, and the royal family grew envious and afraid. They forced the poets to lock their magic away, beyond even their own reach—and now, centuries later, that decision is still reverberating. There are hints of evil magic on the loose, and no one knows enough to control it. The ruling family desires even more control over the poets, brutally enforcing censorship. All is not well in Eivar, and a well-rounded cast of characters must untangle the secrets of a sad, bloody past in order to fix things. But first they must look past themselves and their own desires. 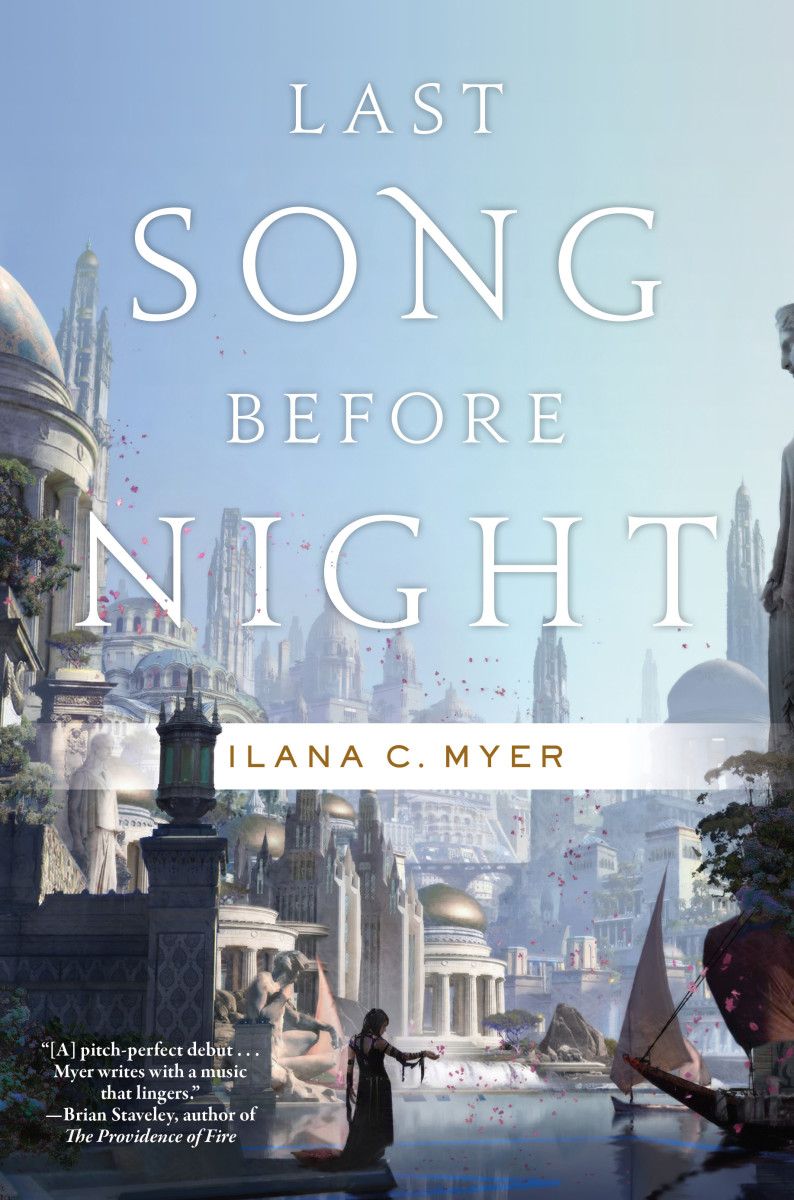 Lin is a songstress in a world where only men may be poets. Darien and Marlen are bright and dark reflections of one another, poets of great skill but dangerous ambition. Rianna is the dutiful heir of a wealthy merchant, but she is in love with someone other than her intended. Add to it a pageant of singers, lovers, hunters, and truth-seekers and there’s the beginnings of a good old-fashioned epic to be had here. Still, it hits some sour notes on the way to finding its explanations and conclusions.

Because of a provocative song, Lin decides that she will follow a legend and seek “the Path,” the equivalent of seeking the gate to the Underworld. Inn other words, she will try to complete a nearly impossible task not usually undertaken on impulse. And Lin is not even impulsive! She is a deeply careful woman on the run from her past. Likewise, at the urging of a song and a dream, Darien decides to challenge one of the most powerful men in the kingdom. This rash act almost certainly precludes him from marrying his highborn sweetheart, who previously inspired his every ambition. So what gives?

It’s not that these actions are completely out of character; it’s more that there are many possible reasons to do these wild things, but no exact thought process is provided. We’re left to guess at their reasoning, which is sometimes explained after the fact and sometimes left ambiguous. This is strange, because the character work Myer does do is quite good. Marlen and Marilla are delightfully screwed up in all kinds of dark ways; Marlen and Darien are excellent foils for one another; Rianna and Ned uncover layers upon layers of strength within themselves that they–and I—never expected. We just need more explicit motivations. And we need particularity. The world building is good and the premise is solid, but the story only really shines when Myer gets down to the details.

There is a lovely sequence, short but evocative, in which a character is reduced to working in a tavern. The descriptions are sharp, and more, the linger very beautifully after the scenes are over. Particularly incisive is the character’s refusal to allow dirt to build up under her nails: it’s so telling of so many things that go to the core of her, not only her fastidious clinging to her previous life, but her stubborn dignity and the ways she finds to be elegant in decidedly inelegant settings. Striking too are other images: Darien at one point clasps a white mask with many-colored patterns; Ned smokes alone in a tavern and reflects on how he once couldn’t tell one end of the pipe from another; on and on, these excellent moments of particularity.

However, the story starts to tarnish when Myer misses opportunities to do the same elsewhere in the narrative. We hear a great deal about the precious stones set in each poet’s ring, but don’t get a clear picture of how poets are given those rings, and we only learn what a few of the stones mean. We learn of long-lost spells, but what did they do? And why did the people not revolt or rejoice when magic was locked away?

There are a few occasions, however, when withholding information is the right choice. Like the shark in Jaws, we see little of the main villain, but we hear rumor of his acts. The focus on blood magic is deliciously lurid, since along with all the threats and rumors around the man, he makes for an excellent villain. Sometimes it’s just really satisfying to have a through-and-through Bad Guy, with little psychologizing or sympathizing necessary. It’s a nice, clean counterpoint to the slightly messier issue of censorship that threads its way through the narrative. Pondering the human cost of free speech, especially when that speech can be tinged with magic that people no longer understand, is a less satisfying task, and Myer treats it with a great deal of sadness, though not without hope.

The entire tone of the book is rather melancholy. Most of the characters nurse hidden pains and longings, and most face a great deal of disappointment. Oh, there is danger, but rather strangely for a high fantasy book, there isn’t so much time spent on battle and magical revelation, but most characters’ reactions feel a bit subdued. Overall, this isn’t a dramatic page-turner. Rather, it’s an unfolding, pensive book that moves more like a dream does. Even swift changes have a flow to them, making the book as a whole feel quite graceful. Ultimately, it’s a sweet, sad song that carries us into night, but it’s a lovely one all the same.