Let’s Talk is a series in which a dialogue takes place between two authors with two different perspectives. One might like the subject, one might hate it. One of them might know a lot about the subject while the other might only have just been introduced to the subject. Enough explaining, Let’s Talk!

On April 10, Netflix debuted the first of their collaborations with Marvel, Daredevil, and boy was it a doozy! Daredevil follows the trials of Matt Murdock (or as he’s better known, Daredevil) as he attempts to clean up the streets of Hell’s Kitchen, the dark gritty underbelly of NYC (which isn’t quite as gritty nowadays as it was when Daredevil was written, but more on that later). In this Let’s Talk, John Caulfield (a Daredevil novice) and Brad Brockway (a total Daredevil nerd) discuss the series in its entirety. Warning: Spoilers Abound.

Brad: Before we get too far into the nitty gritty, just how much exposure did you have before watching the series? I’ve read most of the comics, watched the oft lamented 2003 movie (but don’t blame Affleck for its questionable nature), and can remember Daredevil’s appearances in the 1990’s Spider-Man and Fantastic Four animated series.

John:  I knew about the 2003 movie, but never saw it. Though, now that I’ve watched the series, I want to go back and watch the movie partly to see how different (or similar) the story is and partly to see if it was as bad as everyone said. Really, all that I knew about Daredevil was that he was a blind crime fighter. I knew that his main adversary was Kingpin and that he lived in Hell’s Kitchen. I didn’t even know that he was a lawyer or had heightened super-senses. I had no clue what I was in for, but I really enjoyed it.

Brad: Let’s dive right in, what did you think about the show?

John: I really liked it. It made me want to know more about Murdock/Daredevil but I avoided ‘wiki-ing’ too much so as not to affect my thoughts on the show. To me, it didn’t really feel like a super-hero show – not to the extent that shows like The Flash or Arrow do. I think that works to its advantage and will make it appeal to a wider audience.

Brad: I totally agree, I think it worked on several levels. At times, it worked as more of a straight edged action show, and the Nelson & Murdock aspects made it seem like more of a procedural crime drama. 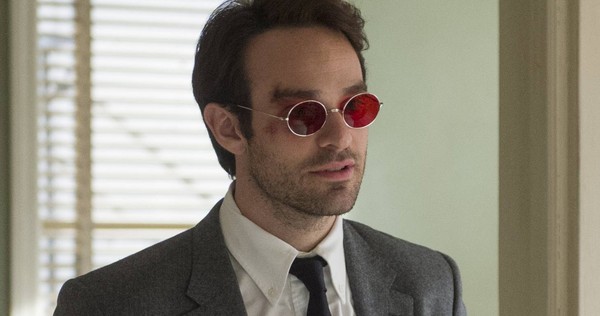 Sometimes Daredevil was a bit too accurate. Would anyone really wear those glasses?

John: As I’ve never read any of the comics, would you say that it’s pretty accurate to the lore?

Brad: Without a question. The number of easter eggs and direct references are outstanding. There were small differences from the comics. For instance, in the comics Matt was a teenager when he got his powers but in the show he’s nine. These changes might be noticeable to the hard core DD fans, but they definitely don’t subtract anything from the show and sometimes they added depth. In the comics, as far as I can remember, Fisk’s motivation for becoming the Kingpin was that he was a husky kid, and the other kids made fun of him. That’s a good enough motivation, but the show took it to another level with his origin story, and the end result is a much more fleshed out and sympathetic Kingpin. 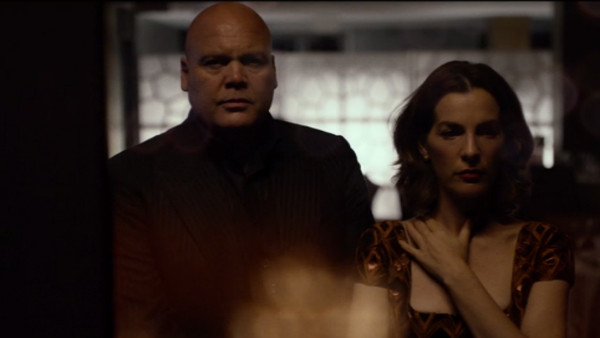 Fisk tells Vanessa all about his daddy issues and she digs it.

John: Vincent D’Onofrio was cast perfectly as Kingpin; he was menacing, but you still wanted to root for him throughout the show. I can remember watching him interact with Vanessa in the art gallery and really wanting him to get the girl. The show did a really good job establishing Fisk, and his relationships with people, but I didn’t really understand why Vanessa was interested in Wilson. Outside of saying that she’s dated all sorts of men, there really isn’t too much on how/why they get together.

Brad: You bring up a really good point, and probably one of the few issues I have with Daredevil. The show doesn’t handle its female characters very well.  Vanessa is an art dealer, who is (apparently) only interested in the truth, and who Kingpin constantly worries about and protects. While Karen Page has more depth and shows more agency as a character, she is the epitome of a damsel in distress throughout the show. It’s definitely something that I hope they can work on in the second season. Karen is a huge character in her own right in the comics and I’d love to see more of that past that Ben Ulrich was talking about.

John: Ulrich was a great character too! Was his death handled the same way in the comics?

Brad:  Actually no. Ben Ulrich is still alive and kicking in the comic, and has played a pretty large role in some of the major story arcs like Civil War and World War Hulk. In fact in the comics, he works for the Daily Bugle, but when Daredevil was being made Sony held the rights to the Daily Bugle so Ben had to work for a different paper. I was pretty surprised when they killed him off, as I figured he’d at least be an easter egg in the Marvel Comic Universe (MCU) version of Civil War.

John: That makes me wonder how this series will fit into the general MCU. Daredevil definitely did not feel like anything else in the MCU. It was a lot darker, bloodier and had lots of fun violence. At the same time, the ways that the show acknowledged the MCU was really effective. It was only a few lines, but it reminded the viewer the context of the MCU for the show. 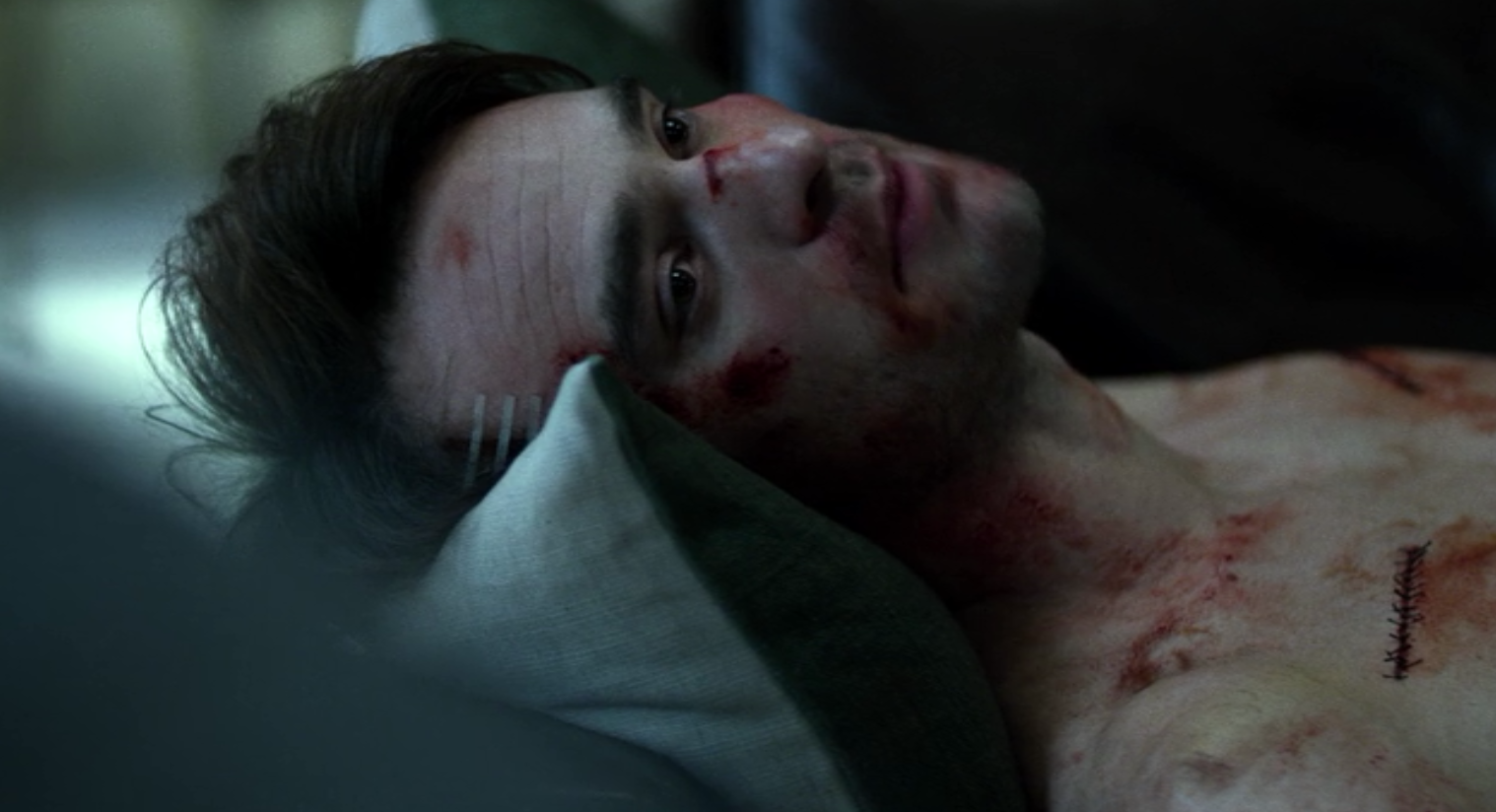 Those stitches aren’t for show, Murdock took some serious hits

Brad: Agreed, it was definitely not the same as movies, but I loved how they used the rampant destruction of NYC in the last Avengers movie to re-establish Hell’s Kitchen as a seedy environment filled with corruption. The show also definitely challenged the idea that Marvel is owned by Disney and has to make everything suitable for the Disney brand. Those fight scenes weren’t just amazingly choreographed, they were detailed, visceral, and brutal. Don’t even get me started on all of the continuous shots, I can’t stop gushing about how amazing they were.

John. Those were outstanding. The fight in episode two was pure genius – great cinematography. That scene also shows one of my favorite things about the series – the fact that Daredevil gets beat up pretty badly. I can’t think of another MCU movie where the hero takes that much damage, and that was only the beginning. The fight with Nobuo was probably my favorite scene in the show.  I need to confess something though, I actually preferred the Dread Pirate Roberts costume to the classic red Daredevil costume. I thought it made a lot of sense, and kept the show from becoming too “superhero-y.” Daredevil was just another guy out there kicking butt and taking names in his pajamas, and it made him a bit more relatable than other heroes in the MCU

Brad: That costume was awesome, and it has ties back to Frank Miller’s The Man Without Fear story arc. I think in using two costumes –  one a hodgepodge of stuff from the internet and one specifically made for Murdock – the writers were able to have a physical evolution to match in the internal changes that took place throughout the season. It was another one of those subtle touches that made this show so great.  I guess what I’m saying is that this show is pretty awesome, and I’m super excited to see what Marvel has coming down the pipeline next!