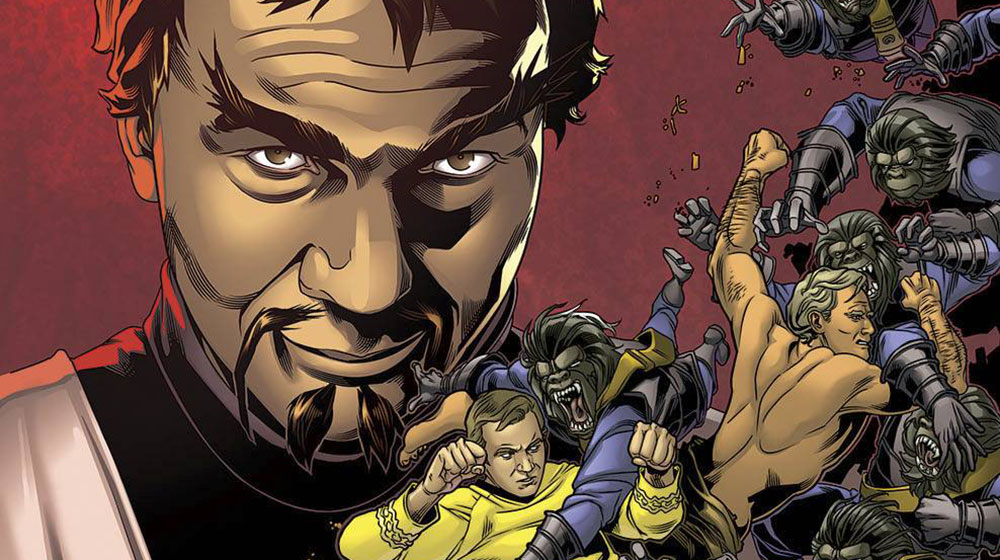 We’ve reached the penultimate issue of Star Trek / Planet of the Apes: The Primate Directive, with the final issue hitting stores today. Kirk and Taylor have decided to work together, the Klingons are pushing the apes toward war, and Scotty may have accidentally spilled the beans on how time travel works. It’s a madhouse!

The issue starts with Taylor being brought up to speed on just how big of a threat the Klingons are to this version of Earth. It’s not just one planet they are after, they want to use Earth as a launching pad for their invasion of the parallel universe it’s a part of. Kirk and the crew enlist the help of Cornelius and Zira and soon discover the Gorillas have amassed an army and are headed towards Ape City to take control of Ape society by Ape force. Cornelius explains that it goes against everything they believe in to harm another ape. “Ape shall never kill ape” is the main commandment they live by. (Am I saying “Ape” too often? If feels like I might be.)

But the Klingons don’t care about that. Gor is pushing them towards a fight. One he knows will decimate their numbers and leave only their best warriors standing. The ape general in Ape City rallies the remaining troops and heads out to confront General Marius (the one Gor has been giving weapons to). It seems negotiations are going to take place after all, so of course Gor steps in to make sure they end badly.

This issue has some fun scenes that reference previous Trek adventures, Spock gets to nerve pinch an ape, and if you aren’t as familiar with Planet of the Apes lore it brings you up to speed on some necessary components of that in an entertaining way. The art by Rachael Stott has been consistently good the entire series and this issue is no exception. Once again the Dana Gould essay in the back is worth sticking around for. This time he talks in-depth about the man behind the amazing makeup effects in both Trek and Apes, John Chambers.

The only down side to this sort of mini-series is that you can’t jump in at any random issue. If you still haven’t hopped on the Trek/Apes train, at this point you are probably better off waiting for the inevitable trade paperback of the series. If you have been keeping up, let me know in the comments what you think of the series so far. I’ll be writing up the final issue soon, so look forward to that. It is ape law!