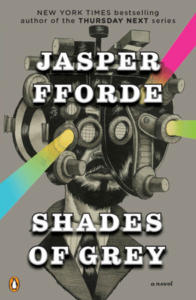 First things first: No, this is not a review of Fifty Shades of Grey, you filthy smut-puppets. If you are looking for something to rustle your jimmies, search elsewhere. Today, we are going to be taking a look at a wildly imaginative dystopian novel bearing a similar name by superstar author Jasper Fforde.

In the future, color is everything. Humanity has changed and now, different shades are used for everything from medicine to narcotics; relics from civilizations past are unearthed and harvested to supply the world with paint. Your place in life, your profession, and your relationships with those around you are defined by the color that you can see. As if this weren’t strange enough, a backwards and bureaucratic government enforces an inane set of rules: technology is limited, knowledge is neglected, and civic duty is honored above all else, establishing the perfect environment for a society of stasis.

The story follows Edward Russet, a relatively mild-mannered citizen of this strange “Colortocracy”. Through a bout of ill luck, Eddie winds up on a trip to the Outer Fringes of Chromatacia, away from his mundane life and rapidly approaching marriage, and into the midst of a mystery that will change everything he knows about the world he lives in. Eddie encounters a colorful cast of characters, including a jam-crazed nudist, an overly zealous librarian, and a spunky but violent love interest who enjoys defying authority a bit too much.

In Shades of Grey, Jasper Fforde depicts an incredibly British dystopia, marked by a polite deference to the rules, a respect for queues, and a surrender of individual worth for a strict intrinsic class system. It is a stark contrast to the post-apocalyptic tendencies in most modern fiction. While The Walking Dead and Mad Max may have an edge on the gritty violence front, Shades of Grey offers something refreshingly different to the traditional genre stereotypes. Fforde essentially ignores all the questions you want to ask about his world (What happened that wiped out our civilization? How did humans lose the ability to see color? What is the government doing?) and in turn, peers into the mysteries that matter to the characters.

That isn’t to say Shades of Grey doesn’t touch on the themes that make dystopian novels so satisfyingly dark. There are echoes of Big Brother in how the chromatic society handles its laws, and the destruction of knowledge and technology is evident throughout. Despite the cleverness and inquisitiveness of Fforde’s main character, his society as a whole is clearly moving towards a soma-esque complacency and acceptance of clear institutionalized racism.

Yet for all that, Shades of Grey is a light-hearted take on the end of the world as we know it; as rife with absurdity as it is with danger and darkness. The novel doesn’t take its murder and mystery too seriously–bits of slapstick humour and clever dialogue abound. Much of the story is just an exploration of the oddments and quirks of Fforde’s eclectic world, and it is this peek into a truly foreign land where the book really shines. Reading Shades of Grey feels like a perpetual inside joke between you and the author; a humor that immediately emerges and demands that you keep turning the page. The story may lack some of the gritty political/emotional punches of its dystopian older siblings (1984, Brave New World, Fahrenheit 451) but it more than makes up for this with levity and wit.

Shades of Grey by Jasper Fforde is available on Amazon or at your local bookstore.