As a child, I remember the days of creating heroic encounters using my favorite action figures. I would pit my favorite figure, “Heavy Metal Rock Star Raphael”, against a slew of other figures ranging from Batman, Power Rangers, and even Mighty Max characters. These “fierce battles” encompassed a majority of my time as a child and even as an adult I would find myself imagining these “what if” scenarios in my head. Fortunately, Wizkids, a New Jersey based game publisher, has a solution for anyone wanting to revisit those nostalgic childhood adventures. Enter Heroclix, the collectible miniature tabletop game that gives you the opportunity to make your “what if?” Scenarios into a reality. I happened upon Heroclix while visiting my local comic store back in July of 2015. The store was running a special in store event based on Marvel’s Age of Ultron. Being primarily a Marvel fan, and always wanting to try new things, I attempted to join the event. The event itself was a “sealed” event which holds the same meaning for those Magic and Pokémon players. I was to buy two boosters and make a team from what I pulled from the boosters.

Figures in Heroclix are marked with a point cost on their dial. Using these point costs, I was to make a team whose total point cost didn’t go over 300 points. The average point cost per figure is between 90-110 points with figures as high as 1000 and as low as 10. Being new to the game, I was very unfamiliar with any sort of strategy, and luckily the other players at the event were helpful in making sure I started with something decent. My first Heroclix team consisted of two figures:  Hercules at 220 points and Wasp at 70 which put me at 290 points. I had no clue at the time if my team was any good, but I was a fan of Hercules. Wasp got me closest to the 300 point maximum. The event began and was played in the traditional 1 vs 1 Swiss format tournament. I was seated with my first opponent and that’s where my Heroclix journey began… 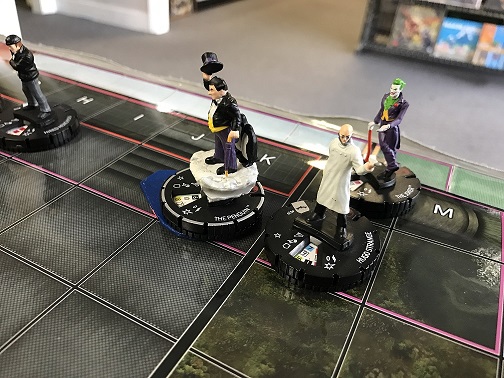 The Basics of Heroclix Combat:

Heroclix is typically played on a 36” by 24” grid map that contains two starting zones for players. Each player begins the match rolling two six sided dice to determine who is the first player.  First player gets to choose what map to play on and the second player chooses which of the two starting zones they want to start in. Players then place their figures on the map in their respective starting zones and the first player begins their turn. Heroclix is a game of actions similar to Dungeons and Dragons. Each team gets a set amount of actions per turn depending on the point limit of the event. For every 100 points of a team build, you get one action. For my 300 point Age of Ultron event, each turn I was able to do 3 actions. Figures are also limited in actions. After doing a non-free action, an action token is given to the figure. Figures can have up to two action tokens at a time. When they reach two action tokens, the figure can not take any non-free actions until they clear away the action tokens. Action tokens are cleared at the end of a turn that the figure took no non-free actions.

There are five types of actions in Heroclix:

Like the title implies, move actions are actions you take to move your figure around the field. When figures are given a move action, they may move up to their speed value (although there are power, abilities, and map terrain that may alter how far they can move). One piece of information to keep in mind is that not all moves are move actions. Certain powers and abilities allow you move and attack by using a “power action”.

Power actions are unusual in that they are completely reliant on your figure having certain powers. To put it simply, power actions are actions that activate a power or ability the figure possesses. We will touch powers and abilities in a later article.

Free actions are actions that don’t place an action token on the figure. You are not limited in the number of free actions you do a turn but figures may only perform the same free action once a turn. 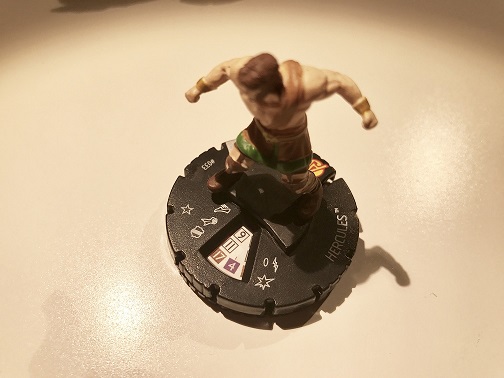 Having the Figures Duke It Out:

Once I had learned how to give my figures actions to actually do something, I was ready for Hercules to smash some heads together. Before I could really get going I needed to understand what values Hercules had. Each figure has a dial that displayed their current values. The dial as seen above gives multiple values with four distinct values that can change when a figure takes damage. Whenever a figure takes damage, you turn the dial clockwise. One point of damage taken equals one click clockwise. As you can see below, Hercules’ dial looks different once he has taken two damage.

There are four values that can change on a dial when it is clicked:

Speed Value (Boot Symbol) – How many squares your figure can move.

Damage Value (Starburst Symbol) – How much damage the figure does when you succeed in hitting with an attack.

There are a couple static values that don’t change when the dial is clicked:

Range Value (Found above the Starburst Symbol) – How many squares away you can make a ranged attack on an enemy figure. If the range is 0, then the figure can only make close attacks if they have no special abilities or powers that give them range.

Number of Targets (Lightning Bolt Symbol next to Range) – How many enemy figures you can target with a ranged attack. Each lightning bolt equals one target. 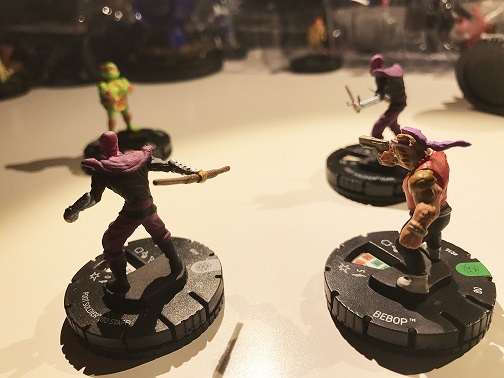 How attacks work in Heroclix:

Attacking in Heroclix is fairly simple. If I’m in range and in a position to attack another figure, I take an action to make an attack.  When attacking, you roll two six sided dice and add those to your attack value.  If the sum is equal or greater than the opponent’s defense value, then you hit. Heroclix does utilize critical hits and misses. If you roll two sixes, you deal an additional point of damage. If you roll two ones, then you automatically miss your attack and your figure takes one unavoidable damage. My Hercules starts out with a 9 movement, 11 attack and a 17 defense. If I wanted to attack with Hercules, it would have to be close range since his range is 0. His 11 attack is very good as defense values range between 15-19 on average. I knew that Hercules was more than capable of leading my team to victory.

Next time, we will take a look into the different powers and abilities figures in Heroclix have to offer and how they influence the battle.