“Insert desire, apply will. The rest is just instinct.”

So sayeth the Graces, twins Fenrin and Thalia and younger sister Summer, scions of a magical house in today’s modern Britain. Raised to cast spells, make poppets, and understand curses, the three siblings are the latest in a long line who work with nature to accomplish their own will. But what they will has changed. Since Laure Eve’s first installment, The Graces, the siblings have set their desires on shaking up the whole Grace inheritance. 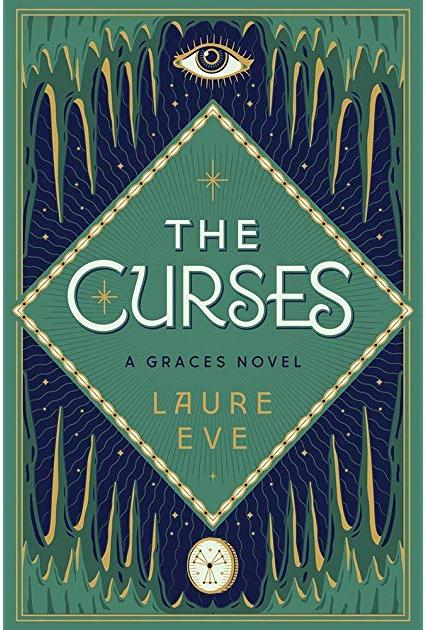 The Graces have a bit of magic, but they’re only moderately more genuine than the hucksters peddling astrology water and vagina crystals.* They trade on their charisma as much as their sacred knowledge, and it’s their wealth and connections that make much of their magic possible. At least, that was more of the impression from the first book, told from the perspective of an outsider. Their powers are more solid in The Curses than in the first book, and I appreciate the move to more elaborate magic and ritual.

River was the antithesis of the Graces. New in town, friendless, and poor, she wanted what the Graces had, but ironically, also had what they did not: she could do real, terrifyingly powerful magic. Her journey in book one was an impressive piece of character work, and also a thoughtful meditation on access to power.

But it’s not River narrating this time around. Summer, the youngest Grace sibling, makes the jump from mysterious and cool secondary character to a charismatic narrator, fizzing over with moxie and anger and curiosity. Her magical powers may not hold a candle to River’s, but that’s not the only kind of power, as Eve reinforces in this book as well. Magic is a consequence of power, not a starting point: it’s desire, will, and focus that make anything, mundane or not, possible. Of course, money, curiosity, and some good old-fashioned research don’t hurt either. And family. That’s a power that no one can escape.

The Graces, despite the glamour, are as tormented by the bonds of family as they are blessed by them. Seen now from inside the family unit, the Graces are not quite so effortlessly cool as they appeared to River in book one. Especially now, in the aftermath of that surprise ending to The Graces, each member of the family is reeling off course. Summer wants to face their issues head-on, which leads to a great deal of chaos and heartache. And also one really epic battle with titanic, elemental forces. Yes, despite the lower-magic setting, this book does rise to epic proportions.

I can’t say too much without spoiling not just this book but also the ending of The Graces, which was genuinely unexpected. Suffice it to say that things did not end well—there was an unintended murder and an attempted murder—and that repairing the damage is not a matter of a ritual or two. That’s the other conundrum of magic Eve uses The Curses to contemplate: if magic is power, then what happens when power is misapplied? Or when it’s not enough?

I really, really liked the resolutions this book came to, and even more than that, I appreciated them. There’s just enough magic for this to feel epic, but Eve is just as attuned to the psychological and the spiritual aspects of her story as she is to the magical. The bittersweet conclusions felt real and earned. They were also tempered by yet more excellent character growth and insight, which made space for joy and redemption.

This book has a fairly nuanced understanding of the practices of Neopaganism, but doesn’t delve into the religious aspects of it. Now, SFF has always used religious traditions and ideas to fuel some of its creative magic. I don’t object to this any more than I object to coloring your exorcism story with Catholic rites. As long as you do your research and try to be respectful—or at least understand what you’re criticizing—it’s your creative prerogative. But it is interesting, constantly seeing stories that borrow imagery but neuter any mention of faith. No individual author is obligated to write about any topic; however, the genre will at some point have to grapple with the consistent absence of engagement.

The Curses will be released December 31.