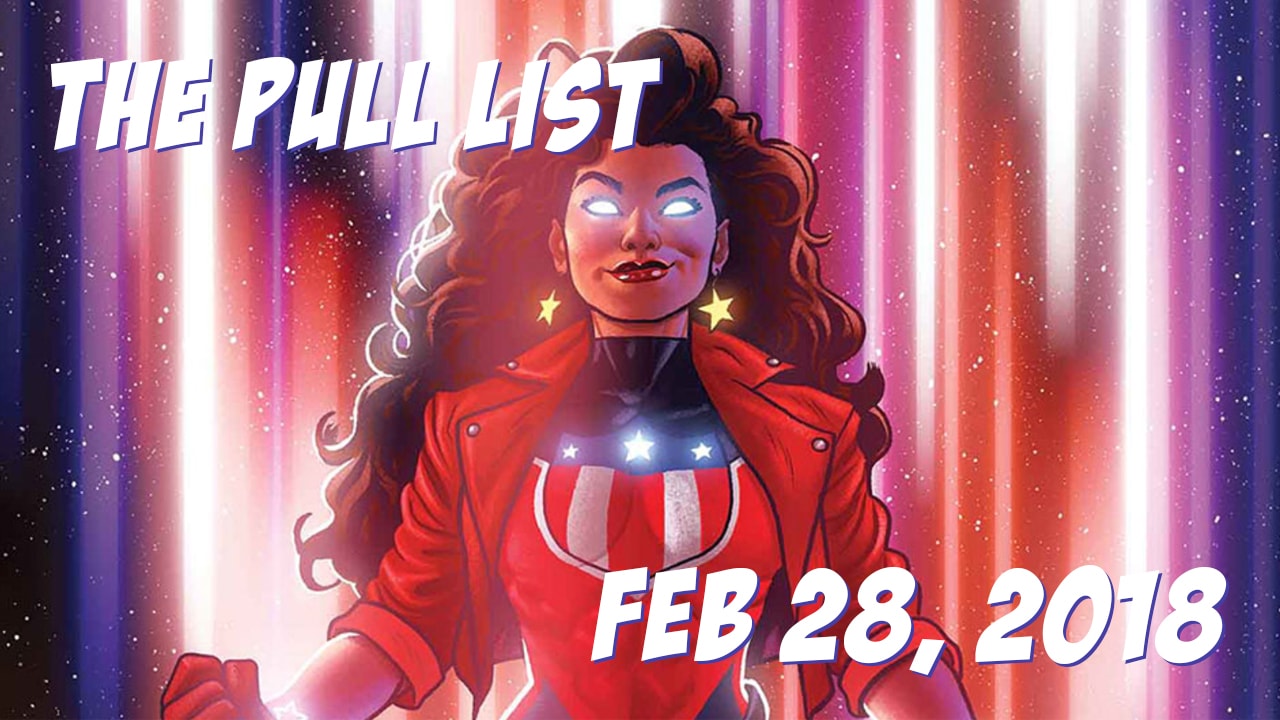 Greetings, Geeklies, and welcome to The Pull List! A new weekly series in which I pick my top comics, both from series I’m currently reading as well as new ones that look promising! So, without any further ado and in no particular order, my top comic picks for Feb. 28th,

I remember back in 2015 when I first learned about America Chavez. I had been into the comic scene for a few years at that time, and liked to think that I generally had a grasp on the Marvel Universe. Yet, I had never heard of America Chavez. As I read up on her, I genuinely couldn’t believe she hadn’t had a solo title. One year ago, America finally received her own book, named after her, and she’s been kicking ass ever since. Writer Gabby Rivera has spent her year with America diving deep into the character, exploring both her powers as well as her origins. No sooner has America found Planeta Fuertona, her homeworld, than she must defend it from the threat that originally drove her ancestors to the Utopian Parallel; La Legion has returned! The climactic battle that will decide the fate of America, her family, and her homeworld closes out Rivera’s run on this title. It is a shame to see such a such a fun title with plenty of action and impactful character moments end after just twelve issues, but this final issue promises to be a doozy! Hopefully, America isn’t yet done with the Marvel Universe.

The Eisner award-winning sci-fi epic returns with an all new arc! Honestly, I cannot recommend this series highly enough. It is hands down one of the best sci-fi stories currently being told in any medium, and if you’ve never heard of it, a new arc is the perfect jumping on point. This new chapter promises to be particularly politically charged, as fake news enters into the narrative. In a galaxy plagued by warfare and riven by intrigue, propaganda and misinformation can be just as deadly as any rifle. With Issue #50 on the horizon, I would expect this arc to be one of the most impactful, sexy, and violent yet, all rendered in brilliantly vibrant color by artist Fiona Staples. Don’t miss this one!

Doctor Star and the Kingdom of Lost Tomorrows #1

Jeff Lemire continues the expansion of the Black Hammer universe, with the first issue of a four issue mini-series with Max Fiumara creating the art. The titular character, the Golden-Age superhero Doctor Star, is now an aged man seeking to reconnect with his estranged son, whom he had hoped would one day take up his mantle and become Doctor Star. It seems likely that the Kingdom of Lost Tomorrow’s may not only be an actual place Doctor Star has been on one of his escapades, but may also be a metaphor for the relationship with his son. How does one manage to be both a high-flying superhero and an attentive father? How can a son ever hope to step out of such a heroic father’s shadow? Over the course of this story, the narrative will take digressions to explore Doctor Star’s past: his origins in WWII, how he got superpowers, and his adventures as a superhero. Lemire is at his best with these touching, personal, character-focused stories, so keep the tissue box on standby as you read this story of heroes, family, and heartbreak.

There you have it! Be sure to head over to your friendly, local comic shop today to check out these fine comics and many others! Can’t get enough comics? Neither can I. Feel free to hit me up on Twitter @Gasp_the_Last. I’ll be back next Wednesday with more comic recommendations.