Here are my picks for the top three anime (films). I’ve specifically limited myself to standalone movies, since it doesn’t seem fair to call something a movie when really you have to watch 72 episodes of anime to really get the full effect. They’ve all seen a fairly wide American/English-speaking release (I’m not trying to be obscure here), and they’ve all stood the test of time. They’re classics, and each one deserves not just one but multiple viewings. 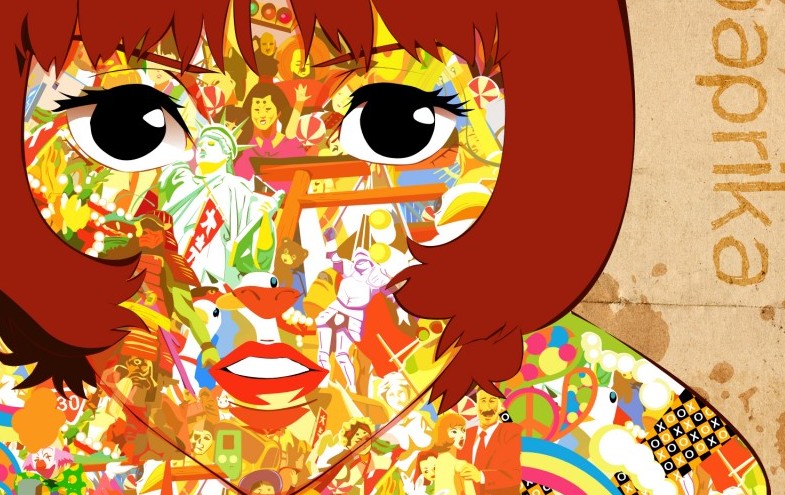 1. Paprika
Do you like Inception? Of course you do. You spent an hour trying to explain it to your parents, three hours debating it with your friends that one time, and about a hundred hours trying to figure out what the hell was going on. The layers, man. The friggin’ layers.

Yeah, Paprika blows through those five layers in the title credits.

Paprika is the projected dream-self of Dr. Atsuko Chiba, a researcher working on a new technology that will help psychologists tap into patients’ dreams. However, one of the devices has been stolen, and the thief is using it to access or create dreams that should never be. The dreams of Tokyo are merging, shifting, turning into something very dangerous, even spilling over into waking life. And it is unbelievable how perfectly Satoshi Kon captures the irrational terror of a nightmare, first the creeping wrongness and then the all-out frenzy, the way you run and run and never get anywhere, the way villains appear and loom and grab you just when you think you’re safe. It takes a true genius to do this without gore or sex–and, in fact, to make a parade of inanimate objects the most gut-twisting source of panic you’ve ever seen.

This isn’t a horror film, either. It’s not even trying to scare you–it just does. But it also makes you feel like you’re soaring, or you’re on a splendid adventure, or a hundred other things. It’s your dreams, distilled and served on the rocks.

Kon’s other movies are spectacular as well, but for me, Paprika will always be the pinnacle of what his animation can achieve: the (re-)creation of a dream, in all its visceral horror, its most surreal flourishes, and its sublime grandeur. 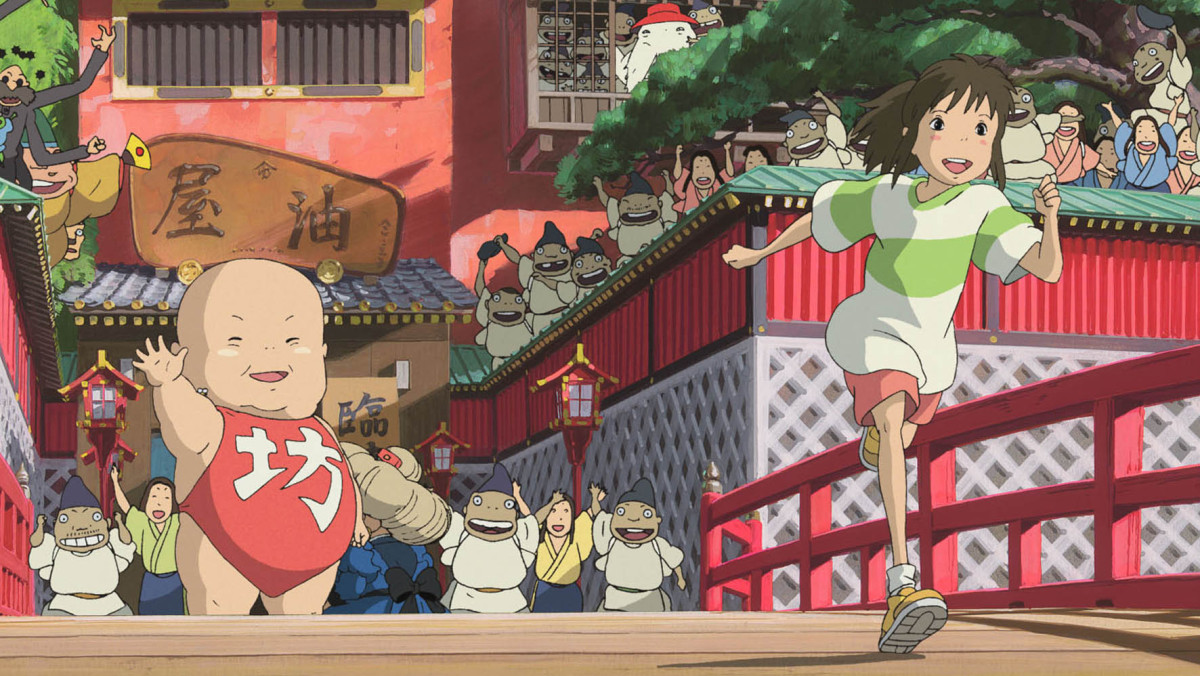 It seems a bit safe and easy to pick Miyazaki’s Academy Award winner out of all his films, but I can’t help it. There is no anime more beautiful than this, in all senses of the word. Characters move through fairy-tale environments–the spirit bathhouse! the train over the waters!–meeting and becoming fantastical versions of themselves, whether pigs or monsters or dragons, and helping others to change along the way.

It really is a story of transformation, with the protagonist Chihiro going from sullen, bratty child to brave young woman while trying to save her parents from a witch. The story sounds simple–and it is, but at the same time, it’s so lovingly told and so subtly profound that no matter how many times I watch it, I always cry when Chihiro does. There’s so much empathy in this story. It’s impossible not to cry with a character who is so utterly real. No matter how strange or horrifying a character may seem at first, there are always ultimately reasons to love that character by the end. It’s not a story of defeating villains, it’s a story about becoming heroes. 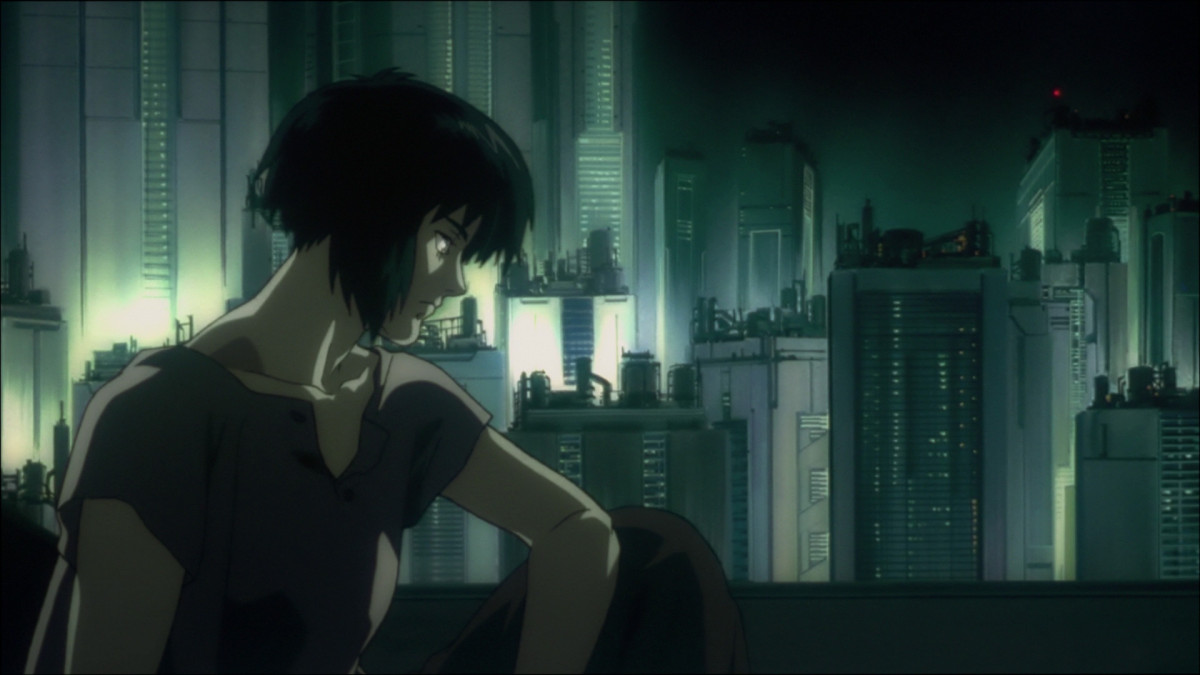 3. Ghost in the Shell
It’s The Matrix!  But, like, not! Yes, this is one of the major influences on the Wachowski’s seminal classic, but don’t go into it expecting a sleek revelation about being enslaved to the machine.

Ghosts in the Shell is a more pensive take on some of the same themes. There is, as is often the case with anime, a rejection of dualism, whether that is good/evil, mind/body, or male/female. (Yes, I know, The Matrix trilogy is more complex than machines=bad, humans=good, but that complexity is a little harder to suss out.) Motoko Kusanagi is, like the rest of the population, fused with machines to the point of a quasi-digitized consciousness and cybernetic body parts. She’s a detective searching for “the Puppet Master,” a mysterious figure hacking machines and other consciousnesses.

Whereas The Matrix equates wanting to be divorced from one’s body and living in the matrix as the ultimate betrayal (Cypher’s also a creep and a sleaze, to boot), Ghost in the Shell wonders what’s wrong with that. Bodies, machines, and “ghosts” all have their limitations as well as their strengths. How do humans and machines–and all the strange in-between fusions of the two–cope with their vulnerabilities? What does it mean to be a cyborg or AI and still face humanity’s greatest existential questions?

While there are fights and sneaking around enough to make action fans happy, this movie has a great deal of compassion for a society made up of Frankenstein’s Monsters, amalgamated creations who are no longer certain of their place, and who are desperately lonely for companions and purpose.

All three of these films use animation to meditate on the possibilities of alternate forms of existence.  Paprika examines dreams, Spirited Away examines both the spirit realm and, more subtly, the natural world, and Ghosts in the Shell examines our coexistence with technology. All of these alternate realities are products of humans. We produce our dreams, we create our technology, and we are responsible for the state of our natural world. But all three have the ability to reflect back on us and affect us in turn.  The films suggest ways in which we can find harmony or balance with these things, rather than forcing them into unnatural contortions for our own ends.

It’s also interesting, now that I’m looking back over the list, to see that all three have female protagonists. One is a cop, one is a scientist, and one is a child. In all of them the romantic aspects are muted or subversive, if they are present at all. What’s more important is the world each woman is exploring and trying to improve. Hey, Hollywood, learn a thing or two maybe?

Finally, I think it’s important to acknowledge that all three films have had fairly widespread American/English-speaking releases. This raises two issues: first, there may be many more movies that we’re not seeing that are just as good, simply because there is a perceived lack of demand. However, the internet has made it easier than ever before to obtain works like this–so pay for them! This will help distributors, translators, creators, and other fans thrive.

Second, anime has long enjoyed a fairly significant cult following, but very, very few films ever make it to American theaters. Most animated films and shows produced in America are aimed at children–and that’s such a frustrating problem. This isn’t to say that Pixar isn’t incredible, or that Steven Universe isn’t just as awesome for adults as it is for kids, but I would love to see animated films aimed specifically at adults here. These three films certainly prove it’s a rich area for exploration.