“Who the heck is Annie May?”

“Why does everyone have huge bug eyes?”

“Why do all the women have such big sweater hams?”

If you have ever found yourself asking these questions and more, you’ve come to the right place. Hi, my name is Kym and I am here to gently lead you by the hand into the magical world of anime. Think of me as your cool anime professor because I’m about to sit on my chair backwards and expand your minds through Japanese cartoons. 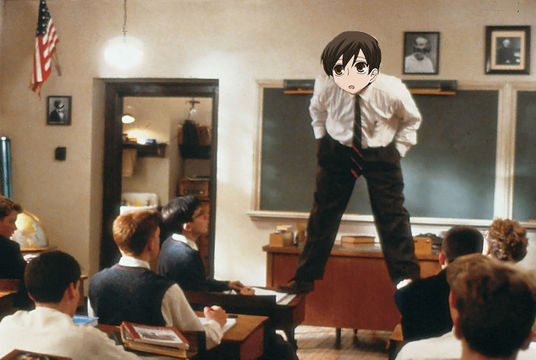 “I sound my barbaric ‘uguu~’ over the rooftops of the world”

Let’s go ahead and start by asking the obvious question:

Simply put, it’s animation from Japan. To really get a feel for what the genre means as a whole, let’s all hop in our time machines and take a brief look at the history of anime.

If you want to place the blame for the creation of anime on any one person, it would be Walt Disney. From around 1910 up until the beginning of WWII, animation in Japan was heavily influenced by foreign markets, both in the audience’s expectations, as well as the emerging style of the time. Additionally, since Disney had already made money back home, their films were sold extremely cheaply in Japan, meaning, in order to compete, Japanese animation studios had to produce their works on a very small budget.

THIS IS YOUR FAULT, WALT.

Most studios back in 1930 used mainly cutout animation (yes, like South Park) because their manpower and resources were so limited. However, this doesn’t mean that it was all garbage. Animators Yasuji Murata and Noburō Ōfuji were able to produce some amazing works using this simple technique.

However, two dudes by the name of Kenzo Masaoka and Mitsuyo Seo stepped the collective Japanese animation game up by formally introducing concepts like cel animation, music, and multiplane cameras. Masaoka and Seo created the first “talkie” animation, Chikara to Onna no Yo no Naka, in 1933, as well as the first entirely cel shaded anime, The Dance of the Chagamas, in 1934. This technology was expensive as heck, though, so these early animations were generally short PR films sponsored by various companies or propaganda paid for by the government.

Mitsuyo Seo worked on several of these propaganda films during WWII – the most famous of which involves a character named Momotaro (a hero from Japanese folklore) bombing Pearl Harbor with various cute cartoon animals. This is considered to be Japan’s first feature-length animated film (clocking in at around 37 minutes), and was produced by the newly re-founded Shochiku Corporation, which still exists today. Interestingly enough, the President of Shochiku was arrested post WWII for war crimes due to his part in the creation of this film. 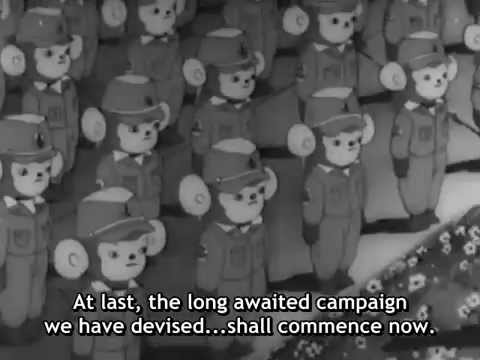 Still from Momotarō no Umiwashi
Huh….

However, the most bizarre propaganda film to come from this time period is a short directed by Komatsuzawa Hajime, which depicts an evil Mickey Mouse raining death from the skies until he is defeated by Momotaro (again – Momotaro was big back then, which is surprising  for a dude whose name means “Peach Boy”).

In 1948, Toei Animation was officially founded. They would later give us the first “true” anime in 1958 with The Tale of the White Serpent – Japan’s first full color animated feature film. Anime hadn’t yet come into its own at this point in time, and a lot of the film was heavily mopped from Disney feature films, with musical numbers and cute animal sidekicks. 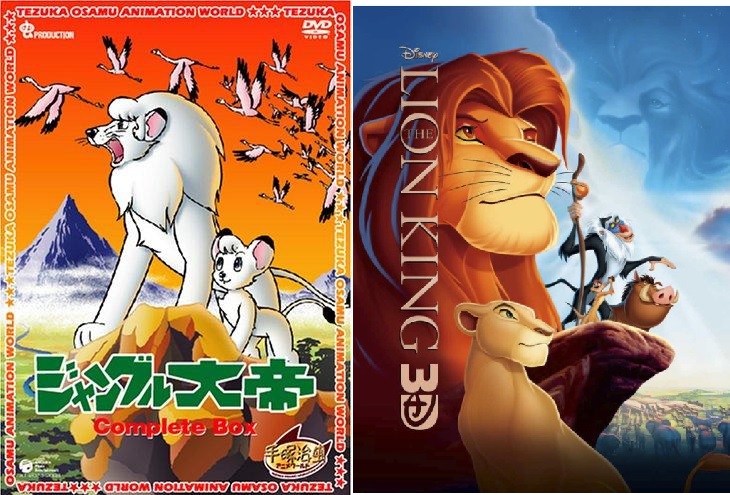 Though Disney would later return the favor.

Toei would later go on to produce some little-known indie series such as Dragon Ball, Sailor Moon, and One Piece.

In the early stages of their career, they focused very heavily on allowing each individual director take their projects in whatever direction they wished. Their collaboration with Isao Takahata on The Great Adventure of Horus, Prince of the Sun would later set the stage for directors like Hayao Miyazaki (Spirited Away, My Neighbor Totoro, Princess Mononoke) and Mamoru Oshii (Urusei Yatsura, Ghost in the Shell, Patlabor).

In 1961 Mushi Productions was founded by Osamu Tezuka aka creator of Astro Boy aka the Grandaddy of Manga. Tezuka was previously working at Toei, but as soon as his contract expired, he wanted to found a production house of his own. 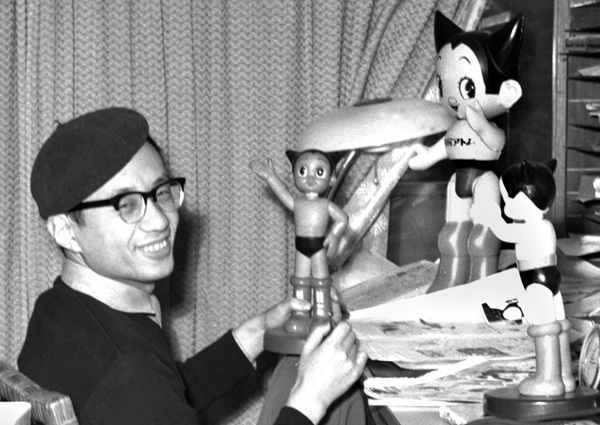 Look at this cheeky beret-wearing goober.

Tezuka began his career as a manga artist, and it was mainly his influence that brought about the Golden Age of comics in Japan post WWII. He originally became interested in animation as a teenager after seeing the previously mentioned Mitsuyo Seo propaganda film, Momotarō no Umiwashi.

Mushi Productions pioneered TV anime in Japan, with series like Astro Boy, Kimba the White Lion, and Princess Knight. These shows were some of the first to make the jump from Japan to the US, though Tezuka was reportedly pissed about the alterations made due to US censorship laws.

The “big eyes” anime style that persists even today was invented by Tezuka, who himself was drawing inspiration from Western animation like Betty Boop, and other Disney films.

WHY DID YOU DO THIS WALT

This concludes our first lesson! Next week we’ll be looking at anime from the 60’s onward, so prep your buns for lots and lots of mech anime.