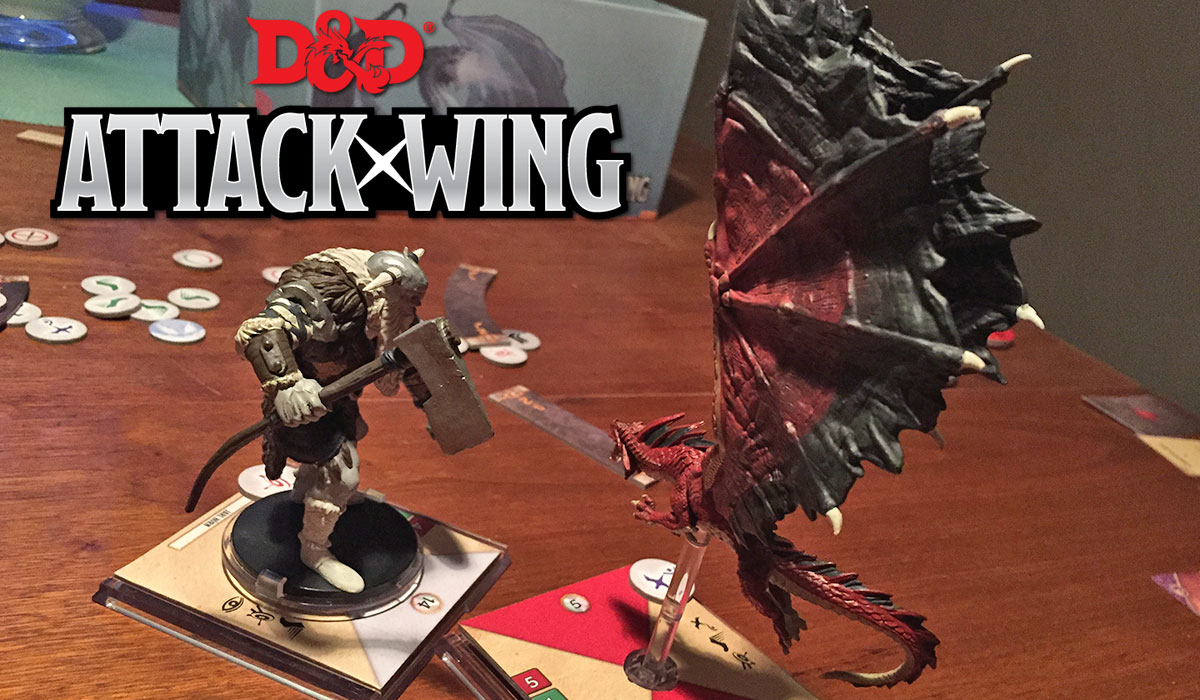 Dragons are awesome. Getting a friend or two together to see who has the better army of dragons, elves and assorted other monsters is even more awesome. That is exactly what D&D Attack Wing allows you to do, by giving you a set of tactical rules and a wide assortment of beautifully detailed and painted miniature creatures to choose from.

In the base game for D&D Attack Wing, two or three players each build an army of monsters and magical creatures based off of a point system. You will recognize these creatures from Dungeons and Dragons, and you will find everything from a band of elves to a frost giant to super-powerful “named” dragons in various colors (the starter set comes with red, blue, and copper). The creatures maneuver around the play space and try to destroy each other. The core concept is “can this monster beat up this monster,” and I love it. 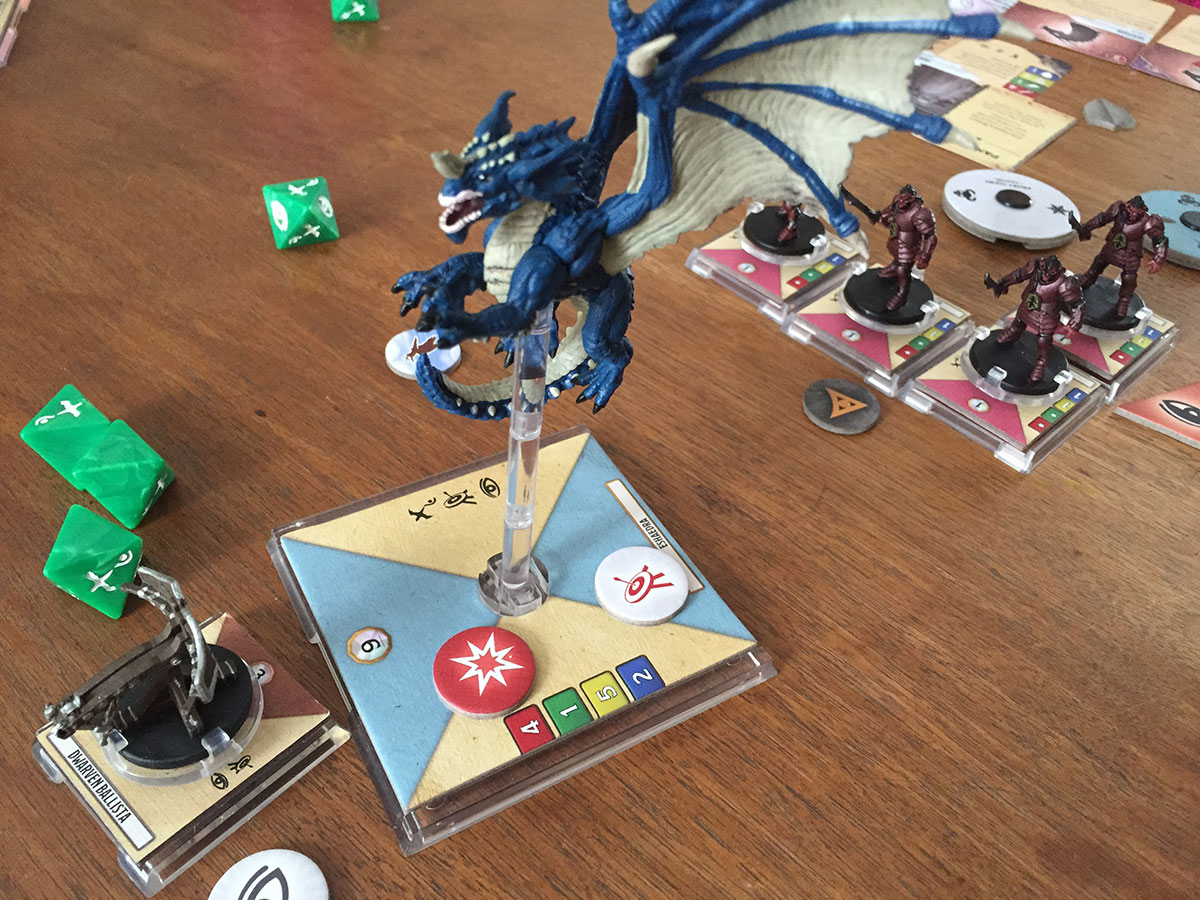 If you are familiar with Star Wars X-Wing from Fantasy Flight Games, then WizKids’ D&D Attack Wing will be immediately familiar to you since they both use the Flightpath™ system. The play space is any 3′ by 3′ area, and each creature has a set of maneuvers to get around the area. The play sequence is: each player secretly picks a move from a maneuver dial, and then each maneuver is carried out. Once everyone has moved, you may find that you guessed well, and have your opponent lined up perfectly, or that you are facing the wrong direction and are about to get a fireball in the back.

Attacks are resolved by each player rolling special offensive and defensive dice. The amount of dice rolled depend on the creatures’ base stats and are augmented by additional abilities and equipment. There are also a series of actions that each creature may perform that can add to their dice rolls or allow for rerolls. Attacks that aren’t dodged or soaked up by armor are represented by damage cards, and critical hits require the player to flip over the damage card to reveal all sorts of nasty effects. 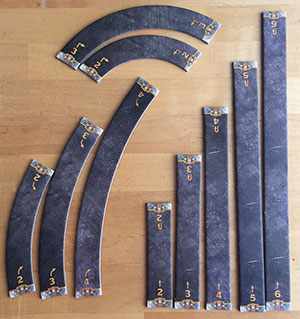 Some of the Maneuver Templates

Flightpath™ uses a series of Maneuver Templates (see photo) which allow for precise movement without a grid or game board of any kind. WizKids has added a variant to the system by adding both ground troops and melee attacks. A flying dragon wouldn’t have much to worry about from a band of orcs with no ranged attack, but if the dragon has already used its breath weapon it will need to “swoop” to get into melee range and use its bite attack, and subsequently open itself up to melee attacks.

WizKids also does a fantastic job utilizing the D&D license with Attack Wing in a number of ways. Miniatures have always been a big part of D&D, so having these gorgeously sculpted dragons soaring and swooping around a battlefield just feels right. There is also a mechanic for adding abilities and equipment to each creature, so a powerful dragon might also be able to cast spells, and each spell is something D&D players will be intimately familiar with.  If the mechanics weren’t enough, the art on the cards used to represent monsters or abilities look like they have been plucked right out of the new 5e Monster Manual (and in some cases they may have been). Finally D&D Attack Wing has a number of scenarios to play through which will give enough story for roleplayers to sink their teeth into. 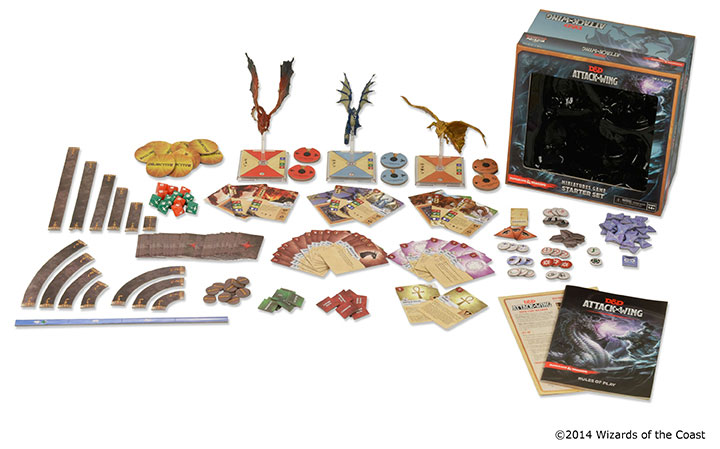 There are only minor criticisms I have for the game. Well, one criticism and one lament about how our world works. I would love for WizKids to figure out a way for this game to be played solo or co-op. Having scenarios to run through with my favorite monster and a buddy would be delightful. Also, the starter set comes with three dragons and tons of cool bits and bobs, but to get the most out of D&D Attack Wing you are going to need to buy plenty of expansions, and they definitely aren’t cheap. The first wave alone, with starter set and expansions, could put you back almost $200.

D&D Attack Wing is a fun concept that has been executed with the highest standards. It plays well as a tactical miniatures game, it embraces the theme and just drips with D&D goodness, and the quality of the components makes it treat to play with the figures. I would highly recommend D&D Attack Wing to board game players and lovers of D&D alike. I can’t wait to show it off at my next gaming group. 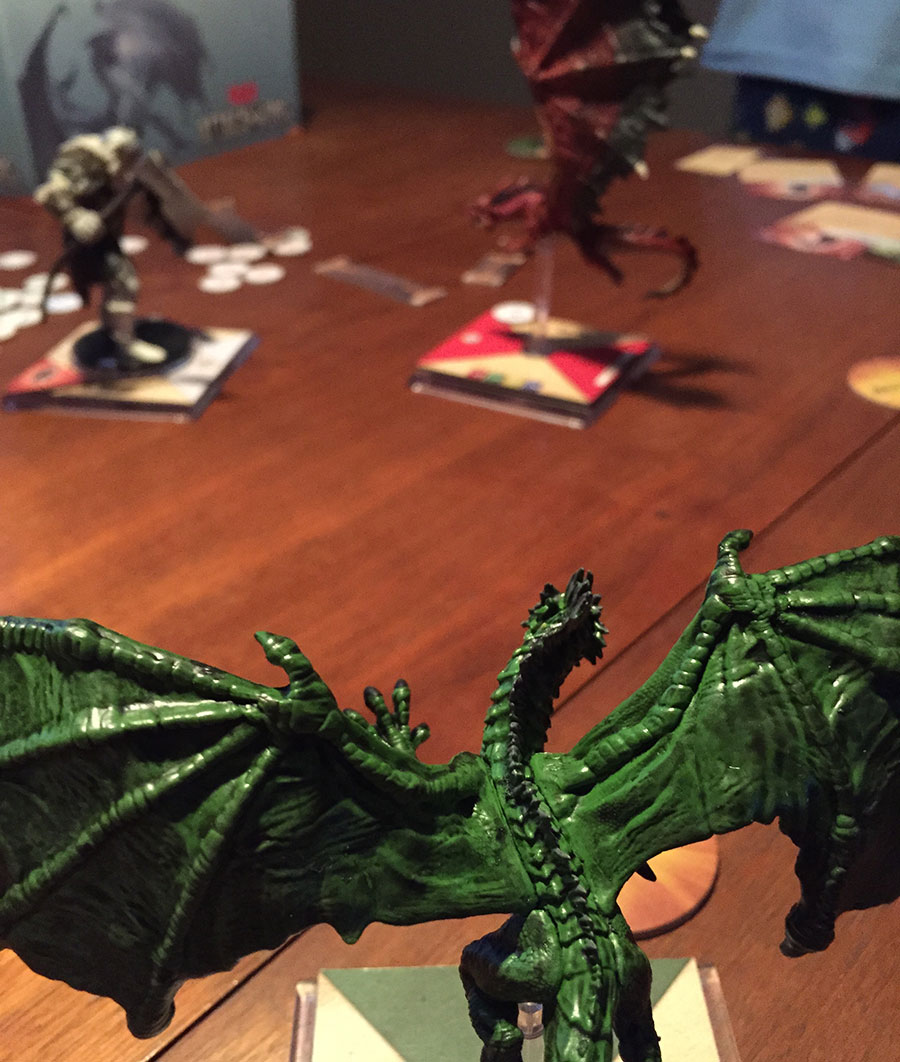