At long last, Disney’s Moana has hit the theaters and, after patiently waiting its debut, I can confidently tell you wonderful people that it did not disappoint! I already have plans to see it for a third time!

Starring newcomer Auli’i Cravalho and Dwayne “The Rock” Johnson, Moana is the story of a young Polynesian girl who is destined to become the chief of her island village. Trouble arises when the island begins to slowly wither away, leaving behind little to no resources for the villagers. Following the wise words of her grandmother, Moana voyages out to the unknown ocean in search of the demigod Maui to force him to return the heart of the goddess Te Fiti in order to reverse the curse that has befallen her home. The film features songs written by Lin-Manuel Miranda and Opetaia Foa’i, and a score by Mark Mancina. 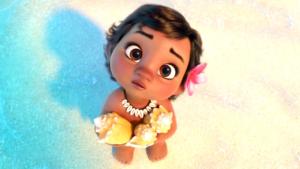 Moana has it all – great songs, vibrant visuals, a talented cast, and a new, engaging story. But what really made it stand out for me is all the lore and the research that the team behind it included in the story. Everything from the way the villagers used all parts of the coconuts that they ate, down to the way they gave their tattoos. The care and the accuracy put into the movie was extremely impressive. The directors were so dedicated to making sure that all elements of the story were as culturally accurate as possible that an Oceanic Story Trust was put together of a team of experts from the South Pacific to consult on the film.

As someone of Islander descent, this movie was amazing. While it wasn’t the first DIsney film to be set in the Pacific Islands (Lilo and Stitch was set in Hawaii and is also fantastic), it is the first to embrace our cultural heritage and I left the theater with a deep sense of pride for my people. Do yourself a huge favor and check out Moana today!