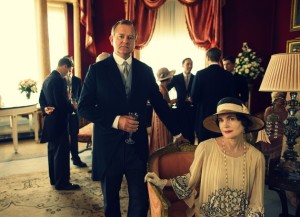 I hope you DVRed this episode or watched it online because SO MUCH HAPPENED.  There was so much sass from so many and so many people’s story lines were in play.  Too many things for my tiny brain.  The times I paused and rewound to watch something over again was TOO DAMN HIGH.

The house is in full preparation mode for Rose’s wedding.  Daisy is making pretty flowers for the cake.  The ladies are oohing and ahhing at Rose’s dress and hat.  Her parents haven’t arrived yet and, when they do arrive, everyone is to pretend that they are still together.  Rose and Atticus are getting married at the Registry Office, then get blessings from the church and synagogue, or so Rose thinks.  Atticus’ father later lets her know that since she’s not Jewish, that it is impossible.  Well, at least it seems as though Atticus’ mother is sweet to Rose and, as Violet remarks: Love may not conquer all but it can conquer quite a lot.  I love how sweet and accepting Rose is of Atticus and his faith whilst “smarter” people are hung up on the fact that Atticus and his family are Jewish and, therefore, different.  As Elsa would say, Let it go (I am so sorry).

Robert seems to be getting more suspicious about Marigold by the minute.  And Mary is so annoyed about how much Edith dotes on Marigold.  I mean, wanting to be with her daughter (even an adopted one as Mary thinks Marigold is) and play with her – the nerve.  “Why does she carry around as though she invented motherhood?”  Tom speaks about his cousin in Massachusetts who is thinking about expanding his business and wants Tom to join in in the good ole’ USA.  And guys, Isis did die.  Waaah.  And Robert is getting a little headstone for her.  Double waaaaaah. 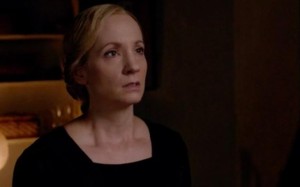 Sergeant Willis is back and so is Mr. Viner from the Scotland Yard.  Some women have come forward saying Mr. Green attacked them and a 2nd witness has come forward saying the person who was arguing with Mr. Green the night he died was shorter than Mr. Bates.  So that clears him but they tell Anna to stop by the Scotland Yard when they’re in London for the wedding.  When they do so, Anna is put in a line-up and a dude looks at all the women in the line-up and that seems to be end of it.  BUT HOLD UP.  Mr. Viner comes back later and arrests Anna!!!  The witness identifies her as being on the pavement near Mr. Green just before he fell.  Mr. Viner doesn’t GAF that Mary is Lady Mary Crawley or the Queen of the Nile.  He’s taking Anna to prison.  Anna and Mr. Bates just can’t catch a break.  WHY CAN’T THEY LEAVE THE BATESES ALONE??

Ok.  Can we talk about how terrible Rose’s mom is?  Susan is the worst.  First, she shows up and she’s like “ummm I ain’t staying in the same room as my estranged husband even though there isn’t enough room in this house.”  She then acts like she’s totally okay with Rose and Atticus getting married, as long as Rose is sure.  But then she’s hella rude at dinner.  Asking rude ass questions about their bloodline and making inappropriate comments about selling the house and living along when she damn well knows that they’re supposed to act like they’re still together.  How awk was is when Atticus’ dad says he only hates 3 things: card-something, under-cooked fish, and DIVORCE.  Mrs. Sinderby has a zing though – when Susan asks whether the Sinderbys have had a hard time finding help, Mrs. Sinderby says no and then goes on to say “but then we’re Jewish, so we pay well.”  That shuts Susan right up – well for the night. 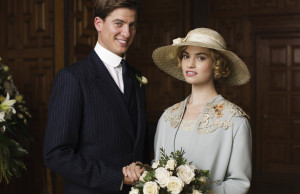 We see Atticus at his stag party and this girl is trying to catch his eye, then follows him to the elevator.  He turns her down but then she shows up at his room.  All she does is lower her dress straps, turn around, pull them back up, and then leave.  Atticus is like ummm that was weird but thinks nothing of it.  The next day, at lunch with Mary, Edith, and Tom (you know, the lunch Mary set up and invited “even you, Edith”. SMH), Edith hands Rose a post that was delivered to her.  It contains pictures of Atticus and the girl, and then we realize why she did what she did because it totally look like they hooked up.  Rose is understandably upset and meets with Atticus to talk to him about it.  (Tom seems to know all about stag party shenanigans and how to handle them).  Atticus suspects his father for wanting to put a stop to the wedding because he doesn’t approve.  His father readily agrees that he doesn’t approve of the marriage but denies being involved.  Rose’s dad knows whats up though – I love that his name is Shrimpy.  He marches to his wife and tells her to stop trying to sabotage the marriage.  She’s distraught that they lost everything but seems to admit defeat.  But, faaaaaack no.  This witch announces at the Registry Office, in front of errrrrrbody, that she and Shrimpy are getting divorced.  Atticus’ dad is like AW HELL NAW but his mom remains calm and thanks Susan for letting them know so they can prepare.  And then she turns to her husband and tells him she will leave him if he does anything to stop the wedding and then he’ll “have a scandal worthy of the name.” BOOM BITCH.  After all these shenanigans, Rose and Atticus FINALLY get married.  After, Rose’s mom tells her she only did those things for love and Rose tells her “I’m afraid we must have difference definitions of that word.”  HUZZAH.  How awkward was when that lady comes up to Cora and offers her sympathies for having to put up with a Jewish relation, only for Cora to be like “girl you know my daddy was Jewish? step off fool.”

All this while, there has been a footman-for-borrow (oh the horror on Carson’s face) that both Thomas and Denker (Violet’s maid) has took a shine too.  Denker is like “omg I will totally take you out and show you a good time because this my town.”  Thomas is really suspicious of her motives and is right to be, because after the first couple of nights, the young man has lost a lot of money gambling and that is not fun.  So, Thomas goes with the the last night and wins back the kid’s money.  He tells the proprietor that Denker has been bragging about bringing in unsuspecting kids and drinking for free.  That dude is like “oh really…is that so…PAY UP DENKER!”  But why is Thomas being so nice?  I am still suspicious. 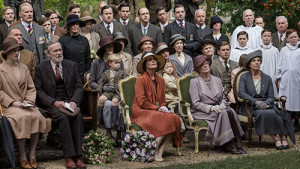