So Tom didn’t come back because he fought with his cousin – he just really missed his family and wanted to steal the newlyweds’ thunder. Edith be throwing shade at Mary, asking her what she will do now that Tom is back and will probably want to go back to being the Agent of the estate. Mary takes none of that guff; she’s an I-N-D-E-P-E-N-D-E-N-T woman and she’s gonna keep on keeping on. She does offer Tom to be Co-Agents but he wants to do more than just stuff with the estate. His political thinking has changed also – he’s not a traditionalist but he also doesn’t feel the same way about capitalism. 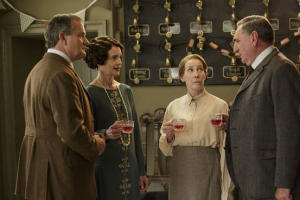 The Carsons have gone to Scarborough for their honeymoon, much to Mary’s dismay, and while Carson is gone, Thomas is King of the castle, which he reminds people of every 5 minutes. Mrs. Patmore notifies Baxter that Sargent Willis will be stopping by to speak with her and the Bates are pretty happy he’s not coming for them anymore. Baxter chooses to have Molesley in the room when Sargent Willis visits, instead of Mrs. Patmore, who seems a little hurt. The Sargent is there to ask Baxter to consider testifying against her old co-worker Peter Coyle, who has tricked and abused women into committing his crimes. Baxter thinks it over for several days, aided by Molesley, and finally decides to testify against Coyle. Good for her. 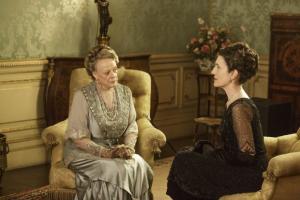 Cora is trying to get Yew Tree farm for Mr. Mason but Robert, Mary, and Tom think that it would make more money if they run it themselves. Thomas is around to hear this and passes the news along to Daisy, who is pisssssed. She thinks Cora has gone back on her word but really, Daisy, Cora never gave you her word. You really just made up the whole thing from the little tidbit that Molesley told you. Cora is trying to help you but she never said Mr. Mason for sure would get the farm! Get yourself together Daisy. But noooo, she has decided to confront Cora about this. 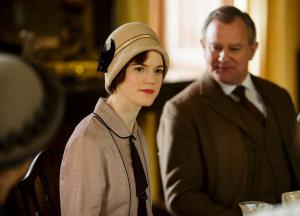 Lady Rosamund is going to be paying the Crawleys a visit in order to throw her hat into the hospital debate ring against Violet, of course. As Edith is driving her to the house, Rosamund informs Edith that she’s a Trustee for Hillcroft College, a school for smart young women from modest families, and that she’s going to suggest Edith to become a Trustee as well. The treasurer of the college lives in Downton, so she plans on meeting him while visiting. The treasurer, Mr. Harding, comes to Downton with his wife – Ygritte…er…I mean, Gwen! If you remember, Gwen was a maid at Downton in the first season but left to do secretarial work, which she secured with Sybil’s help. All of the staff is happy to see Gwen except Thomas – he seems more mad at the world than usual. He just seems so downtrodden and helpless – like he has no future in the world at all. Like he says, he does care about what people say/think about him. Anyway, the family doesn’t seem to notice Gwen, except Tom, of cource, so Thomas convniently lets slip that Gwen used to work there. Mary seems quick to judge and feel affronted as usual but after Gwen tell the story about Sybil helping her, she calms down. After luncheon, they head downstairs to meet the rest of the staff and Robert ticks Thomas off for tattling on Gwen. Meanwhile, Daisy tugs at Tom’s heartstrings by reminding him that William fought and died for this country and now his father needs their help. 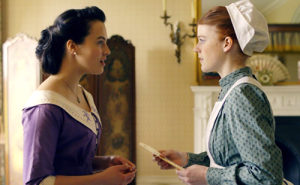 Violet has enlisted help from her friend, Lady Shackleton, in her battle against Cora and Isobel. She arrives for dinner with her nephew, Henry Talbot, and Mary is taken aback in seeing him. Henry is in the area to look at cars – he races cars, you see. At dinner, Violet’s friend doesn’t really help as much as she had hoped and Violet gets really worked up about this whole hospital business. They need to chill on this subject before she gets a heart attack. Before parting, Henry gives Mary his card and tell her to ring him up next time she’s in London. Oooo. Robert’s belly is still hurting him and he still hasn’t gone to see a dang doctor! 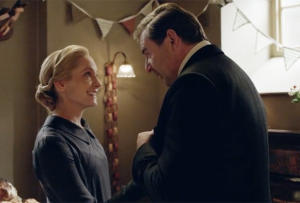 Anna STILL hasn’t told Bates that she’s pregnant. AHHHH Stahp it, Anna. Tell your husbando already! She starts having pains and is rushed to London with Mary and Tom’s help. She undergoes the medical procedure that the Doctor had told her about and she seems to be doing better! She hasn’t lost the baby so maybe she will have a Bates bebe after all! Whilst in London, Mary meets up with Henry for dinner, where Mary impresses him by telling him she’s the Agent of the estate. Seems like these two will be a thing. 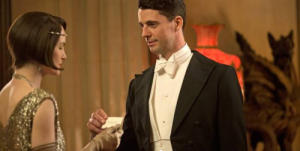 While Mary is gone, Cora brings up the subject of Yew Tree farm again and suggests they offer it to Mr. Mason. While they are talking it over and waiting for Tom upstairs, Daisy is causing a ruckus downstairs by preparing to go up and call Cora out on betraying her. The whole staff begs her not to go to no avail. Tom is back and he agrees to giving the farm to Mr. Mason. Happy with this decision, Cora heads off to bed but is stopped by Daisy in the hallway. Daisy doesn’t seem up to the task but she is about to speak when Robert comes out to the hallway also and tells Daisy about their decision. Daisy is so taken aback that she can hardly talk! Robert has the pain AGAIN and all Cora does is say “ugh”…like what? No! Tell your dang husband to go to the hospital. While Daisy and Mrs. Patmore are having tea and discussing the change in Mr. Mason’s fortunes, Andy stops in and tells them that he may have started in the city but the country is where he wants to end up. He leaves after a meaningful glance at Daisy. Andy+Daisy=OTP. 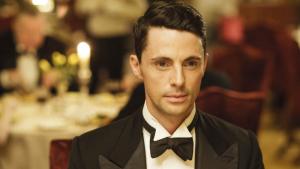 The Carsosns are due to arrive back from their honeymoon soon and Thomas tries to speak to Robert about how much he has enjoyed being butler. Robert says he hopes Thomas has learned about being kind as well because it will help him when it is time to move on. But clearly, Robert didn’t mean to say it – it just kind of slipped out. Thomas just keeps getting sadder. Thing is, Thomas has been nasty to so many and for so long that, even if he tries to turn over into a new leaf now that he thinks the end is nigh, people aren’t going to buy it. So, yes Thomas, you are your own worst enemy. 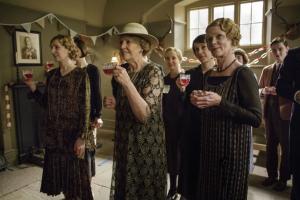 They have the downstairs decorated and fixed up for the Carsons’ arrival. Anna is back up and walking around. Bates finalllllly asks her about what she’s hiding and she finalllllly tells him. THANK THE LORD. Upstairs, Violet tells Isobel, Cora, and Rosamund why exactly she is so opposed to the takeover of the hospital: she is afraid that the bigger hospital take over will mean the individuals’ want and needs will count for nothing and the state will control everything at a very costly price. Soon, they are summoned downstairs to welcome the Carsons back (Violet has not been downstairs in 20 years!). Whilst downstairs, Edith unveils her plan to find a woman editor and Mary actually approves of the idea – much to Rosamund’s surprise – but then Mary immediately says something snarky about Edith. Oh Mary. Everyone is having such problems with calling Mrs. Hughes, Mrs Carson. Carson proposes that they continue to call her Mrs. Hughes and everyone is relieved. Carson leaves to check his room once over and seems pretty emotional about leaving the place he has spent most of his life. Sidenote: Thomas seems to be plotting something but then when is he not.