Sorry for missing the recap last week but life got in the way.

Downton is hosting an open house for the public to raise money for the hospital. Robert is back from the hospital but still has to take things slow and rest up – he does not like the idea of this open house. What do these people want to see anyway?? Doesn’t everyone live in enormous houses?? Nosy people, I tell you what. Mary and Tom try to explain to him that people want to see the different way people live because they are curious about the goings-on in these huge houses. Robert finally relents to the idea but downstairs, Carson has his own misgivings about the open house.  He is afraid that people will steal things, people will be jealous, and the next thing you know, the Crawleys will be led to the guillotine. That escalated quickly. The servants have varying opinions about the open house, from Bates, who could care less, to Daisy, who thinks all the great houses should be open to the public, to Molesley, who thinks it would do the public good to see great art and craftsmanship. When Thomas agrees with Molesley about people asking why the Crawleys have nice things and not them, Carson cuts him short by asking him how his job search is going. Rood. Robert keeps talking about Carson being a kind man, and he is, but he is also quiet harsh on Thomas. I know he hasn’t had the best experience with Thomas but Thomas has been doing a lot better. Carson could cut him some slack instead on constantly being on his case about finding a new job. Later, Robert stresses to Carson about cutting down the household staff, so I guess Carson is under stress also. Still, be nicer to Thomas, Carson. (Even Mary, with a little help from George, notices that Thomas seems a little down but she chalks it up to be stress from trying to find a new job.) 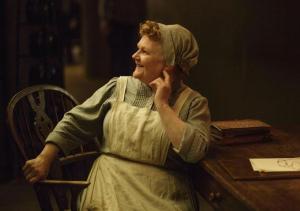 Daisy does not like the fact that Mr. Mason and Mrs. Patmore are getting chummy. She seems a wee bit jealous that Mr. Mason’s attention is going to be divvied up and she wants it alllll to herself. So when Mr. Mason gives her a note to give to Mrs. Patmore, she throws it in the trash. Only, Mrs. Patmore finds it there and then Daisy pretends to have lost it. Poor planning, Daisy. Her exams are coming up and Molesley seems more excited than her! When talking to the headmaster about the exams, he suggests Molesley also sit for a general knowledge exam in order to possibly help him out with the school. Molesley is super excited about this prospect. Mrs. Patmore offers to make lunch for the exam takers and invite Mr. Mason to come along. Daisy freaks out, telling Mrs. Patmore to basically leave Mr. Mason alone. Later, Mr. Mason brings in fresh farm veggies for the kitchen and that just pisses off Daisy even more. Sharing is caring, Daisy. 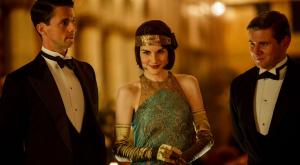 Anna is having some pains again but she’s still not on board this whole “telling Bates” thing. Bates persuades her to tell Mary about it and to go back and see the doctor in London. Mary agrees (she herself wants to go to London) and plans an overnight trip to London and wants something “medium-smart” for her evening plans. Mary is making plans to surprise Henry Talbot at dinner and invites/dares Tom to join her, who agrees. Turns out, Anna is fine – just standard pregnancy pains. While getting ready for her night out, Mary offhandedly questions Anna about whether Thomas was being genuine about his fondness for the children, which Anna thinks so, and Marigold. Anna starts to maybe say “they’re all cousins” or something similar but stops herself. However, Mary catches Anna’s slip-up and it adds to her arsenal of misgivings about Marigold and Edith. At dinner, after Mary exclaims that they are all single, one of the women retorts saying they weren’t always single because they are all war widows, and Mary very pointedly says, “I’m not a war widow,” which seemed like something that could’ve been better left unsaid. After dinner, Henry asks Tom and Mary to walk back to Lady Rosmund’s (where they are staying) and Mary gestures to Tom to go so that she can be alone with Henry. Whilst walking, Mary explains to Henry that she is not fond of cars because Matthew died in a car wreck, and Henry is very sympathetic. They then get caught in a rainstorm and share a passionate kiss. How romantic! After she gets home, she tries to get Tom to open up about Edith and Marigold – again! Let it go, Mary! 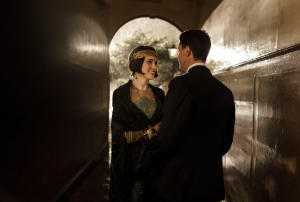 Carson still hasn’t caught on that he’s undermining Mrs. Hughes’ cooking and doubting whether or not she can do things in her own household, like make coffee. He does not get the shade Mrs. Hughes has been throwing his way. So clueless. He is so critical about the way she cooks, but I don’t think he means it in a mean way. He is just used to being fed by a really good cook and expects things a certain way. However, that doesn’t mean he shouldn’t appreciate the work that Mrs. Hughes puts in at their house! 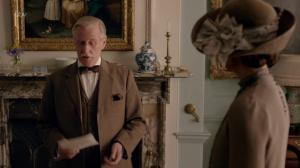 There is some dramatic news about the hospital: the hospital merger is going to happen. But that’s not the worst of it! They are unseating Violet as President to give the position to Cora! DO THEY EVEN KNOW WHAT THEY HAVE DONE?? Isobel, Cora, and Dr. Clarkson are all rightfully worried/frightened/anxious about this news, but they decide to do nothing and tell no one until Violet gets the news herself.

Lord Merton has come to visit Isobel and brought with him his son Larry’s fiance, Ms. Cruikshank. Isobel is a little prickly, but Ms. Cruikshank tells her that she doesn’t think the way that Larry does and it seems to soften Isobel a little. I still don’t trust Ms. Cruikshank; anyone who would agree to marry Larry has to be a terrible person herself. Violet also meets her after the open house and seems to reserve judgement until she has further acquaintance of Ms. Cruikshank. 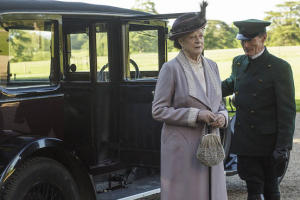 Pelham comes to Downton, just in time to help with the open house! Before they go down to dinner, Edith and Pelham look in after the children, while they are all sleeping. At dinner, Pelham has some suggestions for the open house such as putting a servant in every room to keep an eye on things, having guides (turns out none of them know much about the house they live in).

Thomas is trying to teach Andy how to read but they’re doing it on the down-low. They plan things in hushed voices and meet each other in secret, which leads to people thinking they’re up to other things.

Baxter has received a letter from Coyle and he wants her to visit him in prison. Molesley tells her to throw away the letter and ignore his request but Baxter doesn’t seem so sure.

Mrs. Patmore’s house is done and she is ready to rent it out! She has even installed a telephone in her house so they can take reservations. She also tells Carson about Andy and Thomas sneaking around – come on Mrs. Patmore, leave them be. Carson speaks with Thomas about what he has heard about him and Andy. Thomas gives him his word that nothing is going on between them but turns out, his word isn’t good enough for Carson even after all these years and that really, really hurts Thomas. 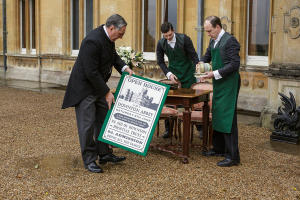 The day of the open house is here and it’s crazzzzy! So many people show up to see the house! The guides (Cora, Mary, and Edith) don’t know all the answers to people’s questions – Cora even has a light bulb moment about why the place is called Downton Abbey! In the middle of the tours, who walks in in a huff but Violet – and it is not good news. She has finally received the letter about Cora getting the presidency of the hospital and asks Cora if she knew about it the last time Violet visited her and Robert, which she did. Enraged, Violet goes to visit Robert and rant to him about it – so much drama. After she leaves, the cutest little boy visits Robert and asks him about the way they live – why their house is so big and why they don’t have a comfy house even if they can afford one. He is so dang cute. After seeing the success of the open house, Tom suggests opening the house up to the public on a regular basis as a way to pay for the upkeep of the house and the rest of the family is like NOOOOOOOOOOOOOOOOOOOO, which is funny because that is exactly what they’re doing with the house the show is shot in. 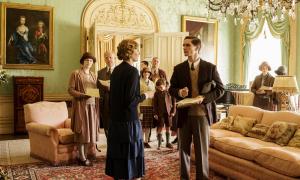 We end the episode with sad Thomas crying in the dark. He’s tried to be nicer and try harder but I’m afraid it has come too late. Most people have already fixed their minds about him, especially after all the shenanigans he has pulled and all the terrible things he has done – not many people are willing to give him a second chance. Poor Thomas (which is something I never thought I would say).