Guess who’s back, back again?  Downton’s back, tell a friend.

It’s 1925 and the fall of the noble houses is in full swing. Not to worry though; Downton Abbey is spared – at least for now. Season 6 Episode 1 opens with a fox hunt and a mysterious woman creeping on Mary – she even takes a tumble because she’s distracted by the woman. (Mary – would you really like to ride a horse side saddle instead of being comfortable? Side saddle is sooo much more graceful!).  The kids, George and Marigold, have grown up considerably and are as cute as a button. Although there has been cutbacks in the household staff, there is a new footman, Andy, in the hizzouse. 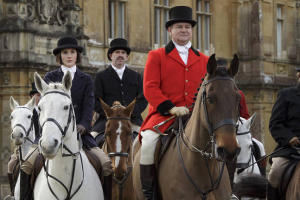 When Mary gets back from the fox hunt, she sees the mysterious woman by the great house and inquires after her. The woman introduces herself as Rita Bevan, who had worked as a chambermaid at hotel in Liverpool, where Mary and Tony Gillingham had the “weekend of sin” before Mary rejected his proposal. Rita is at Downton to blackmail Mary – £1000 to keep Mary’s secret. She warns Mary that she will be back for the £1000. Mary confides in Anna about the blackmailing attempt. It is pretty striking that while Mary is thinking about the scandal breaking, she only really thinks about herself and doesn’t think how it would affect Tony and his bride. Oh Mary. 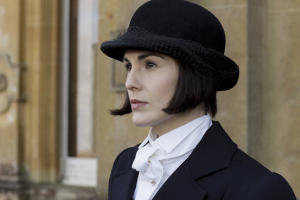 Anna is hiding something she’s sad about, per usual. I don’t know how she hasn’t learned that she needs to let things go and people in. SMH Anna – thought you were smarter than that. Anna is being short with her husband and a bit aloof. Even Mary inquires after her well-being. Anna is still out on bail and waiting to hear whether or not there will be case against her or Mr. Bates. While polishing shoes with Mr. Bates and talking about kids in need of homes, Anna finally breaks down and tells him about her miscarriages. That’s right – homegirl has miscarried more than once and not told her husband because she didn’t want him to get his hopes up and let him down. This couple’s life is so dramatic!

Sgt. Willis stops by to tell Mr. Bates and Anna that a woman has confessed to pushing Mr. Green. Though the police still need witnesses corroborating her confession (apparently people make false confessions all the time), he tells them to hang on sloopy, hang on. So basically he came to tell them “you may be off the hook, but you may not. I really brought you no real info. Okay, bye.”. 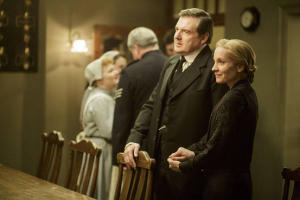 We got a brief update on Tom – he’s living in Boston and Sybbie has started attending school. In his absence, Mary wants to take the role of the sole Manager of Downton Abbey. Robert doesn’t think Mary is up to the task, even though she’s been doing the job ever since Tom left.

Mrs. Hughes is reluctant in picking a date for her and Carson’s wedding and after a few moments of prodding by Mrs. Patmore, Mrs. Hughes reveals why: she’s afraid that marriage to Carson would include ALL of her wifely duties including S-E-X and she’s afraid she would be a disappointment at it. Bless her heart. Mrs. Patmore even suggests turning the lights off but Mrs. Hughes’ reservations are hardly resolved. She enlists a reluctant Mrs. Patmore to question Carson about his intentions and expectations. So poor Mrs. Patmore goes to talk to Carson and it is as awkward as you would imagine. She tries to hint at the thing without having to come right out and ask it but Carson does not get it at all. In the end, she doesn’t succeed in getting an answer and leaves a perplexed Carson behind. 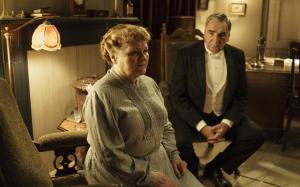 Whilst Mrs. Hughes asks Mrs. Patmore about how she got on in her questioning of Carson, that brazen hussy, Rita Bevan, walks into the kitchen, announces herself as a new maid at the Dower House, and asks to be taken to Mary, saying she has a note to Mary from Violet. THE NERVE. She’s super rude to Mary – she just seems super jealous of everything Mary has and she does not. Mary refuses to pay and Rita threatens her saying Mary only has one more chance before her weekend tryst is in the newspaper. EXTRA EXTRA, READ ALL ABOUT IT! Mary has Anna escort Rita out by the arm.

Later, Carson asks Mrs Patmore to come talk to him. He had asked Mrs. Hughes about an update on setting the wedding date and she kind of just brushed him off saying there’s no rush so he’s beginning to think that she doesn’t want to marry him anymore. Mrs. Patmore puts his fears at ease and tells him (awkwardly) what she really wanted ask – does he mean to have a full marriage or a warm companionship? He tells her to tell him that he wants a full, real, and true marriage. And that to him, she is beautiful.

Apparently, Rose is happy in New York. Who would’ve thunk that?

Edith is having problems being the Boss – the editor doesn’t like having to report to a woman. The nerve. Who do these broads think they are anyway? Woman boss – what is the world coming to anyway? She is also torn between staying in the countryside, where she could never own up to Marigold being her own child, or moving to London, where no one seemed to care. She has a pretty swanky place in London – move there girlfriend.

Lady Violet and Isobel are at it again, this time over the hospital. The Royal Yorkshire County Hospital wants to take over their little village hospital. Isobel and her husbando think the takeover would be good for the village because their patients would have access to modern equipment, advance treatments, and better fundraising. However, Violet and Dr. Clarkson disagree and think that they should have control over the maintenance over their own hospital. Isobel puts this disagreement as being about Power vs. Protection of Patients.  Cora agrees with Isobel and Lord Merton, although, between Violet and Isobel telling her to keep out of it and Robert asking her to do so also, she can’t get a word in edgewise. 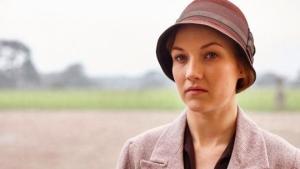 While Mary is out, who comes a calling but that dang Rita Bevan. Mosley can’t get her to leave and Carson tries, but Robert walks out and Rita just says “fuck this, I’ve waited long enough” and strides into the library with Robert following behind her. When Mary finally arrives, Carson tells her about Rita’s visit and that she’s still in the library with Robert. She rushes into the library only to see Robert giving Rita a note. Rita sneers at Mary for being lucky as she leaves. Mary tries to explain to Robert why she and Tony did what they did and why she rejected Tony’s proposal. When Mary says she was going to let the story be published rather than be blackmailed, Robert says that would’ve been harsh on Tony and Mabel and you can see from Mary’s reaction that she had not thought about the consequences of her choice past herself.

Robert turns out to be conniving in his own turn: he only paid her £50 and got a signed confession to blackmailing. No wonder Rita was pissed when she left. Apparently, this whole blackmailing saga also proved to Robert that Mary is tough enough to run the estate…? To me, it only showed that she keeps making poor choices and not thinking about others but who am I to judge? 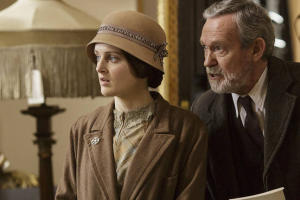 We also get a glimpse of other great houses having to sell off and shut down. The estate where Daisy’s father in law is a tenant is being sold off and his future there is unsure. He asks Robert to give the estate owners a call to see if he can find anything out about whether or not the new owners will keep the tenants and if he can put in a word for him. On the day of the auction, they all decide to go to auction, including Mr. Mason and Daisy. When they get there, Daisy is miffed by everything they are selling, including wedding gifts from the tenants. She decides to say a couple of things to the old estate owner and the new, which angers the new estate owner, who tells her that she has hurt Mr. Mason’s chances of getting a tenancy at all. What a dick. What Daisy said wasn’t wrong – it is unfair that Mr. Mason has worked on the land all his life and it can be taken away from him in two seconds. But that is also how life works, Daisy, and you just have to roll with the punches (and sometimes punch people). The Lord selling the estate has some foreboding words for Robert – telling him the time has come to shut the big houses down and not to try to hang on till its too late like he did. 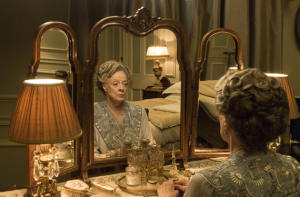 Carson does NOT like the idea of cutting down the household staff more than they already have – now they only have 2 housemaids, 2 footmen, and NO kitchen-maid! Violet confides to Denka about the great house is thinking about cutting the staff down and, Denka being the terrible person she is, visits the staff room of the great house to casually pay her sympathies for their upcoming loss of employment. This, of course, gets people worried and Thomas starts inquiring about when people would be let go and how many. He is convinced that he will be one of the first to go (well, can you blame them, Thomas?). Back at Violet’s house, Denka is snooping around Violet’s desk and, when caught by Spratt, tell him of his upcoming dismissal also because obviously, Violet can’t live without a lady’s maid and a cook, but a butler is expendable. After Spratt pointedly asks Violet about staff cut downs, Violet reassures him and devises a plan to punish Denka for violating her trust – while Isobel is visiting her, Violet makes comments to Denka as though she will be one getting the ax. Violet has no intentions on carrying on without a lady’s maid but as she says, “sometimes its good to rule by fear”.  That ought to straighten Denka out. 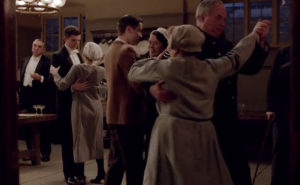 Sgt. Willis comes to see Mr. Bates and Anna again, only this time with actual news. Turns out there was a witness to the meeting of Mr. Green and the girl who confessed, so now the confession is real. Their troubles are finally over. Robert and rest meet the staff downstairs for a toast (“British justice…envy of the world” <– this toast…really??) and party. Carson finds Robert and Cora having a late night snack (Robert doesn’t know what a refrigerator looks like) and asks Robert and Cora whether Daisy is to be dismissed but Cora pushes for leniency. 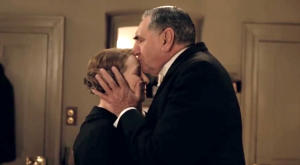 Mrs. Hughes finally has a conversation with Carson. Carson thinks that Mrs. Hughes wants to break-off the engagement but what she really wants to do is say “if you want me, you can have me…warts and all.” Dawww. What sweethearts.