The family is having breakfast when they get news from Tom, who has opened a new salesroom, and Rose, who loves New York and is getting a house in the Hamptons for the summer. Mary suspects that Rose is pregnant, but Edith thinks she’s making a mountain out of a molehill. (It is season 6 and I still can’t get over the fact that they iron the newspaper. What the what?) The issue of the hospital is still not resolved nor is the issue about where Carson and Mrs. Hughes will be married. Robert offers to have the servants’ hall decorated but both Edith and Mary think something better needs to be done. 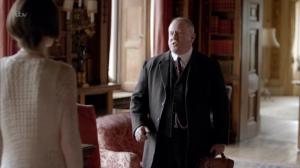 Mary is quiet ready to take over as the agent of the estate, much to the dismay of Mr. Finch, who has come along to suggest a late fat stock show – its going to be an experiment! He is there to ask for a decent entry from the surviving houses. Sounds morbid. George and Marigold want to go with Mary to look at the pigs at the Drewe’s farm that will be put up for the fat stock show. Edith is hesitant about this because Mrs. Drewe will be there and see Marigold, but she also hasn’t told Mary the truth about Marigold so Mary doesn’t get it. Cora offers to go with the kids and Mary, which eases Edith’s fears a bit, although she’s still not excited about it.

How cute are those pigs though? So dang cute. Cora is trying to leave the Drewe’s farm before Mrs. Drewe got back, but then she’s there. Its really sad to see Mrs. Drewe look and want to keep Marigold there. Cora mentions this to Robert, who goes to ask Mr. Drewe about leaving the Downton Abbey estate and take up work somewhere else. Mr. Drewe protests saying his wife will be fine with Marigold being at the big house and Robert concedes. 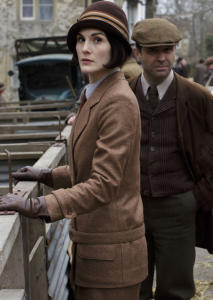 Daisy still feels terrible about having blown up at the new owners of the land Mr. Mason tends to – Mr. Molesley tries to cheer her up a bit but it doesn’t really work. When in the village, Mr. Molesley looks in at the school and talks to the headmaster about examinations. He succeeded in getting old exams for Daisy so she can look over them and practice before she sits for her own examinations. How sweet is Molesley? He tells Daisy that if she passes the exams, she will be in a better position to help Mr. Mason. Molesley tries to get her to let go of this notion that she needs to talk to the new owners or Lord and Lady Grantham about Mr. Mason’s predicament, but Daisy is not budging. Later, Daisy asks Baxter to bring it up to Cora, who agrees but tells Daisy to not hold out hope. Daisy does go up to speak with Cora herself who says she has something in mind but won’t tell Daisy until it is certain to work. 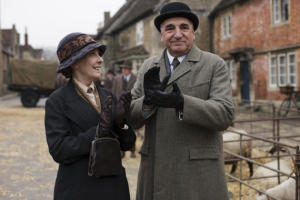 Mrs. Hughes is not into having the servants’ hall decorated for their wedding. She wants to do things her way – find some place local, decorate it, and throw their own party. But Carson is quite married to the idea of having their party at Downton because it means so much to him. The engaged couple have their first tiff over this issue. I must say, Mary is insensitive in putting her wishes for Carson and Mrs. Hughes’ wedding over what they would want. She should know that Carson can’t refuse her and should keep in mind that Mrs. Hughes may want to do something different for her wedding than have it at the place she works. Like she says “its where we work, not who we are.” Carson is pretty adamant about having their wedding at Downton so I guess we will see.

Dr. Clarkson, Violet, and Isobel meet with Robert to try to figure out what to do with the hospital. The hospital in Yorkshire that is trying to take over the village hospital has written to the donors to try and canvas the supporters – Isobel thinks it’s smart while Violet does not. There is clearly still an impasse between Violet and Isobel and boy, are there fireworks every time they discuss things. Since Cora was not in attendance of this meeting, Isobel suggests informing her and resuming discussions at a later time. For what it’s worth, Lord Merton is on Isobel’s side because he thinks the amalgamation of the hospitals will mean better equipment and services to the people in the village.

Dr. Clarkson, Violet, Cora, and Isobel tour around the village hospital. Isobel and Violet both act like Cora can’t make up her mind for herself but she can and she has. She supports the joining of the two hospitals because she thinks it will bring better services and technology to the village – the same as what Isobel thinks. But Violet and Dr. Clarkson won’t go down without a fight!

Thomas keeps trying to hangout with or help Andy and Andy keeps saying no. Take a hint, Thomas. When he asks Carson about getting the ax or not, Carson tells him it wouldn’t hurt for him to look for a job elsewhere, which he does, but he’s not the best interviewee. He comes off as pompous and over confident. Times are a-changing, Thomas and beggars can’t be choosers. Baxter keeps being really nice to Thomas, much to Molesley’s annoyance. 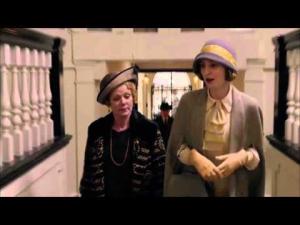 Edith’s editor, Mr. Skinner, is still being a HUGE dick to her. Does he not realize that she is his boss? She just need to put her foot down and tell him to quit it or fire him already. Edith’s aunt, Lady Rosamund Painswick, tells her to try to get comfortable living by herself but warns her about getting too comfortable.

Anna is still sad and Mary notices. Anna finally tells Mary about her problems with pregnancy – that she can get pregnant but can’t keep it. Mary does care about Anna so she offers to take Anna to London to see her doctor, who tells her that she has a weak womb and that a small medical procedure might do the trick. Through all this, Anna doesn’t breath a word to Bates about going to see the doctor or what the doctor said. What the heck? All the while, Bates is telling her that they’re a team and they should share in the happiness and sorrow. 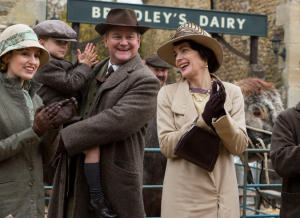 Seems like the whole house is going to be at the fat stock show. Even Mr. and Mrs. Drewe are there without their kids – she was little taken aback seeing the whole Crawley family there. Guess who wins best in show? Golden Empress belonging to the Crawleys. WHAAAAT? Mary even gets complimented by Mr. Finch for a good job at putting on the show. Then all hell breaks loose. Marigold has gone missing but it seems like Mr. Drewe knows from the very beginning that his wife probably took Marigold – which she did. Robert, Cora, Mr. Drewe, and Edith go to the Drewes house to go get Marigold and Mary, being ever sensitive, is more worried about how they will get home. Smh. It is really sad seeing Mrs. Drewe holding Marigold and talking about just wanting to keep her close. She obviously still loves Marigold a lot. Mr. Drewe finally gets her to give Marigold up and after handing Marigold back to Edith, tells Robert that he will look for a different tenancy 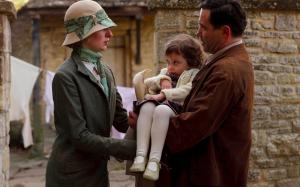