The staff is busy preparing for Carson and Mrs. Hughes’ wedding but Mrs. Hughes is still a little miffed about having the wedding at the Great House instead of where and how she actually wants it. She turns down a suggestion from Mrs. Patmore to order a dress from a catalog – she’s going to wear her brown day dress instead. She isn’t all that excited about her impending nuptials. 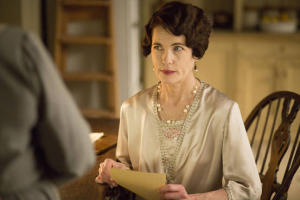 Violet is still trying to get Cora and Robert on her side but it seems like a fool’s errand and she’s not happy about it. She takes her leave before she has to see Cora; she believes her relations with Cora with be quite stiff for some time. Cora is finishing up the menu for the wedding with Mrs. Patmore, when she asks if everything is okay with the wedding. Mrs. Patmore takes this time to spill the beans about Mrs. Hughes’ reservations about getting married at the great house. After dinner that night, Cora asks Carson to invite Mrs. Hughes to the drawing room. Once Mrs. Hughes arrives, Cora asks her whether or not she wants to be married in the Great House, to which Mrs. Hughes says “NO” but more politely. She wants to have her wedding her own way, invite people from all walks of life to celebrate with them, and cut up – none of which would be appropriate for the Great Hall. Mary is still being unreasonable and trying to force her decision on Mrs. Hughes but she’s not having it. Carson is pretty sweet and agrees to be married in the school house in the end. Mary just seems mad to not get her way and calls her mother a snob for not wanting the servants getting married in the Great Hall. Okay Mary, you don’t have to be a dick about it. 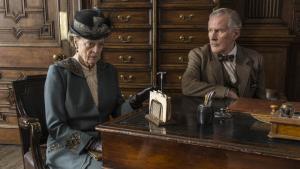 Mary has a forlorn letter from Tom. He seems to be missing Downton Abbey something terrible. Anna also tells Mary about Mrs. Hughes’ plain old dress and Mary says she will think of something. In other news, guess who is pregnant again??? Anna – geez they be getting it on like rabbits. Again, she doesn’t want to tell Bates till she’s showing. So much for sharing your life as one.

Meanwhile, a stranger has come to visit Spratt, and Denka is quite keen on finding out who it is. She sees him trying to slip out later that night with a blanket. She tries to weasel the answer out of Violet, who understands perfectly what Denka is trying to do and does not give in. Later on, local police stop by the house to ask Spratt if he knows a Wally Stern, who is Spratt’s nephew. Apparently Wally was in prison but seems to have broken out and people have reported seeing him in the area. Denka puts two and two together and figures out that it was Wally that Spratt took the blanket to the other night and Wally is being put up in the potting shed. She says she can keep the info to herself, but will she want to? Spratt isn’t so sure. 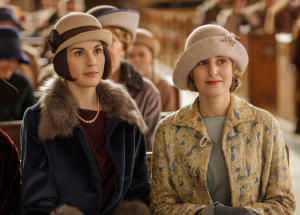 Thomas is still looking for jobs and Carson is quite alright with letting him have some time off to go on interviews. If he gets another job, it would take the firing of a staff member problem out of the hands of Robert and Carson. Win win? (Robert has a little bit of indigestion, btw). Only when Thomas’ interview at Dryden Park doesn’t go very well. He keeps forgetting that he’s not really in the position of turning his nose up at jobs that don’t “suit” him. He is interviewed by the owner of the house, Sir Reresby, who has let the upkeep of the house go, since his wife’s death. He seems to have a sad and lonely life; his sons died in the war and he remembers the house in the glory days and is waiting for it to return. Thomas questions the grandeur and prominence of the house and the family which rightfully pisses off Sir Reresby. He asks Thomas if he is a Republican, to which Thomas says he doesn’t think so but he hasn’t really thought about it. Sir Reresby’s mind seems to be slipping because when Thomas takes his leave, Sir Reresby starts talking about how they shouldn’t let “them” down – he thinks the good times will be back at the house and they need to be ready for it. Its really sad that he’s living in the glory of the past but seeing the ruin of his house at the same time.

Back at the house, Thomas still keeps trying to talk to Andy. Baxter tells him to stop fishing where he won’t get any bites but he says all he wants from Andy is friendship, which he had until everyone poisoned Andy against him. Well, maybe you shouldn’t have been such a dick to everyone before and people wouldn’t feel the need to warn the newbies against you. #justsayin

Mr. Molesley is trying to help Daisy with her exams but she’s more focused on helping Mr. Mason. Later, while he is helping her, he lets slip that the Drewes have left their farm. Daisy hears this and goes from 0-100 being excited. She basically thinks it a done deal. She even goes as far as thanking Cora for trying and Cora is just thinking “well god damn it…it’s not a done deal yet.” 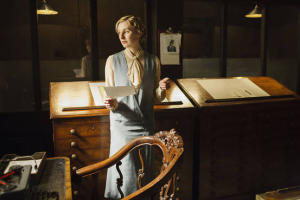 Edith is off to London again to deal with her editor and she’s staying alone at her flat. SCANDAL. While she’s in London, she runs into Mr. Bertie Pelham, whom she had met at Lord Sinderby’s. They chit-chat a little and Edith tells him about her work woes. She kind of talks down about herself, saying “I bet you don’t even remember I own a magazine” etc but then she did grow up with Mary so I’m not surprised. Bertie asks Edith out for drinks and, even though she’s hesitant at the beginning, she agrees to meet him. Back at the office, she is butting heads with the editor again, who is just the worst. She finally has had enough and fires the man, which seems to make even the secretary happy, which goes to show that the editor had been a terrible person to everyone. Now, Edith has to get the magazine ready to be sent off by 4am – then she realizes that its 7pm and she’s late for meeting Pelham for drinks. 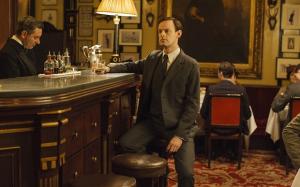 She gets to the bar to find him waiting. She tells him that she can’t have a drink and to let her know when he’s back in town but he has no intention of walking away; he means to come back to the office and help her. What a sweetie! He is quite helpful too, telling her that people only care about seeing the best clothes and prettiest faces, and lengthening articles a little. They finally get the magazine out to the printer and they have a breather to talk. Edith decides that she’s not going to take over as editor quiet yet – she will put someone in as caretaker while she thinks what the purpose of her life is because she doesn’t want to lead a purposeless life. When Pelham tells her that she inspires him, she brushes it off saying not many people would say that, to which he says “they would if they knew you.” Ooo is Edith getting her groove back?? Back at Downton, Robert is so proud of her achievement and Mary is just like *yawn*. Edith does not tell them about the help she got from Pelham but I’m sure that had more to do with the fact that Mary was there.

Mrs. Patmore has ordered a frock from the catalog as a surprise for Mrs. Hughes but the merchandise they get doesn’t look as good as it did in the catalog – who woulda thunk! Anna tells Mary about the unfortunate frock and Mary has an idea – what about pairing the frock with one of Cora’s embroidered coats. (I just want to keep saying frock.) Unfortunately, Cora is out all day visiting the Yorkshire hospital and then Dr. Clarkson. Mary just decides to forgo Cora’s permission to borrow her coat which is always a good thing, right?

Carson and Mrs. Hughes discuss their upcoming day. They’re both excited and nervous; Mrs. Hughes is a little sad about her dress – she wishes she had put forth more effort on it but its too late. Boy, will she be surprised! 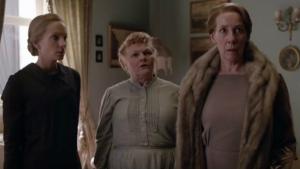 Cora visited the Yorkshire Hospital without the rest of them knowing and they’re not happy. Dr. Clarkson is the most disappointed in her but Isobel lets him have an earful saying he is against the merger because he will go from being the head honcho to being just another local doctor. ROOD Isobel. Every one seems taken aback by her rudeness, prompting even Lord Merton to try to fix things by saying Isobel didn’t mean it. Cora leaves angry and frustrated. When she gets home, Mary tries to tell her that she let Anna and Mrs. Patmore put Mrs. Hughes in Cora’s coat but she is gone before Mary can finish her sentence. When she gets up to her room, she finds the 3 ladies putting her coat on Mrs. Hughes and she goes off! What she says is true – Mary can give away her clothes as she pleases but she doesn’t have the right to give away Cora’s – but she could’ve been nicer about it. Anna relays the situation to Mary, who goes to patch things up. She has a conversation with Cora, who clearly feels badly about it. Mrs. Hughes is also very upset about it. Cora comes to see her while she’s having tea with Mrs. Patmore, apologizes for her behavior, and gives Mrs. Hughes the coat she was trying on – Baxter is going to fit the coat to her. 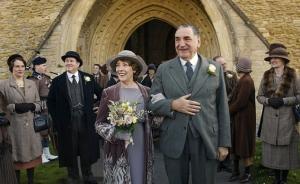 ITS THE DAY OF THE WEDDING! Anna, Mrs. Patmore, and Baxter come to Mrs. Hughes’ room to dress the bride. The florist drops off the boutonnieres but apparently Carson has not thought about having ushers. He appoints Molesley, Andy, and Thomas (reluctantly). At the church, they exchange their vows and they are married! While everyone is filing out, Isobel apologizes to Dr. Clarkson for the things she said at the previous meeting and he tells her that she might not have been completely wrong. He is reviewing his position on the merger, much to Violet’s chagrin. 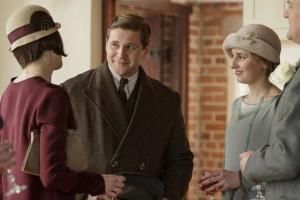 The wedding festivities continue at the schoolhouse, where everyone joins for food and drinks. Mr. Bates sees that Anna is over the moon about something but can’t quite put his finger on it. Mr. Molesley talks to the school headmaster about Daisy, who in turn asks Mr. Molesley if he has missed his vocation of teaching, to which Mr. Molesley sadly says he has missed everything but Daisy doesn’t have to. Sad face. You still got time, Molesley! Daisy has done told Mr. Mason about the Drewes’ old farm and he is so happy – only Cora’s face tells that its very far from being a done deal. UGH. Carson gives a toast saying he is happiest and luckiest of men, and guess who shows up while everyone is toasting to the bride and groom? ITS TOM AND SYBBIE! (Way to steal the Carsons’ thunder, Tom) Turns out, it was your classic tale of “I didn’t know what I had till I was far away”. Being in Boston made Tom realize that Downton was his home and the Crawleys were his family. Well Boston will do that to anyone…hey yo!