Henry has invited the Crawley family to watch him and his friend, Charlie, race at Brooklands. Robert is dead set on going because he is tired of being in the house. Mary is going also and Edith finds out that Bertie is also invited, so she’s probably going, too. Robert sets forth his case for going to the race and Cora leaves it up to him, so of course they’re going. The sister banter between Mary and Edith is still there; they seem to be competing more now that they both have dudes. Just be happy for each other, for goodness sake. Robert and Cora are intrigued as to why Mary is taken by a race car driver with not a lot of prospects while she turned rich ol’ Tony down. Mary even asks Anna if she approves of Henry, to which Anna gives an honest answer: she’s not sure if his life and her life fit well together. Opposites attract but do they live happily ever after? 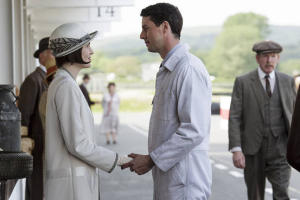 Mrs. Patmore has turned her house into a Bed & Breakfast (with an inside bathroom and all!) and she’s the most excited. Carson still hasn’t caught on to the fact that his many, many, many complaints about the way Mrs. Hughes runs their house and makes food bother her. Typical dude. Smh. And Daisy’s exam date is finally set and she’s extra nervous! Later, Mrs. Patmore is the one being nervous because she puts out an advertisement in the papers for her B&B! I would stay at her B&B, the food would be so delicious! Also, Mrs. Patmore and Mrs. Hughes come up with a plan to teach Carson a lesson about alllll the complaining he’s been doing about Mrs. Hughes’ work. After her B&B gets some renters, Mrs. Patmore whips up a breakfast for the couple one morning. When she leaves, there is a sketchy dude hiding in the bushes taking some notes.

Guess who is invited to Larry Grey’s wedding? Isobel. Yes, this is the same Larry, Lord Merton’s son, who was very rude to Isobel, so naturally she and Violet are very confused as to why she’s even invited to the wedding. Violet believes the invitation came at the behest of Miss Cruikshank, Larry’s betrothed – you can tell that Violet still isn’t keen on Miss Cruikshank and neither am I. Violet offers to pay a visit to Miss Cruikshank and see what she can find out. Also, Violet has decided to go away to try to forget and forgive the whole hospital debacle. She wants to go away before she says anymore hurtful things to her son and daughter-in-law, and come back when she’s gained control of her temper over this situation. 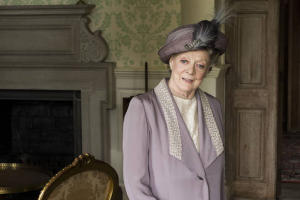 Violet goes to visit Miss Cruikshank and cuts through her bullshit. She tries to be sweet and buttery, saying Larry and Isobel didn’t see “eye to eye,” but Violet just shoots her down – no, Larry was a dick to Isobel, let’s call a spade a spade. Then, Miss Cruikshank just continues to dig herself into a hole saying Larry hadn’t thought things through about his father being old and in need of care. Violet catches onto this at once; what Lord Merton’s son and future daughter-in-law want from inviting Isobel to their wedding is for Isobel to take Lord Merton off their hands because they don’t want to take care of him.

After Violet learns of the family’s plans to leave town for a day of racing, she decides to leave on her trip while they are away. She leaves a letter for Robert with Isobel. Before she leaves, she fills Isobel in on the terribleness that is Miss Cruikshank. Isobel now has to decide whether she can abandon Lord Merton to his horrible children or come between a father and his children. Is that really a tough decision? Oh, and of course Denker is gloating to Spratt about Violet going to the south of France because she will be going with Violet and Spratt will not. She is something else. 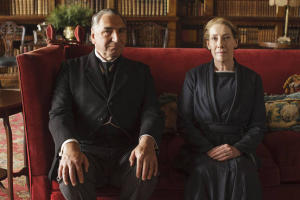 Carson is still pressing hard for Thomas to get a new job, which he is trying to do but hasn’t had the best luck in doing. Seems like Mrs. Hughes feels badly about how much pressure Carson is putting on Thomas about it all. She tries to apologize to Thomas in case Carson has come off seeming unkind – he just doesn’t like it when a plan is delayed. I guess she thought this would make him feel better but it certainly did not. She goes on to tell him that there is place out there where he will have friends, a place to belong to but he sadly says that Downton is the only place he has ever laid down any roots. Maybe you shouldn’t have treated everyone like shit before, Thomas.

Baxter’s conflict with Coyle is still not resolved. Sure, she didn’t have to testify in court but because of that, she feels like her situation with him is unfinished. She’s trying to decide whether or not she should go see him in prison to make sure he has no power over her. No girl. Forget him and move on!!

Andy goes to visit Mr. Mason who asks if maybe Andy could help him bring the books up-to-date. What Mr. Mason doesn’t know is that Andy is trying to learn how to read and write but he hasn’t quite mastered it yet. Andy makes an excuse about not being able to spare the time for it but his lie (or omission) is bound to catch up to him soon. 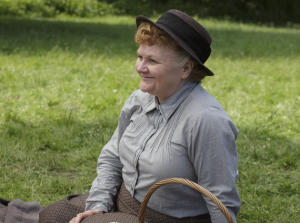 After the family leaves for London, the servants sit down for (a dull) dinner. Molesley and Daisy are to take their exams the next day. Mrs. Patmore and Andy will be taking down a picnic lunch for them. During their break from the exams, they’re all having a nice lunch picnic, when Thomas brings down a basket of lemonade Mrs. Patmore forgot in the kitchen. While they are hanging out, Andy asks Daisy if the papers were hard and she hands it to him to see for himself, not knowing he can’t read. He tries, but he’s soon found out. He tells them that Thomas has been trying to help him learn but it hasn’t been going well. The headmaster of the school offers to teach him to read and takes him off of Thomas’ hands, which seems to bum him out. Helping Andy read was the one thing Thomas had to feel wanted/needed and now even that is gone. Later, the headmaster stops by the house to invite Molesley to join the village teaching staff, which means he passed the exam! While he talks about the career in service coming to an end for most people, Thomas is in the background looking sadder than ever.

Meanwhile, in the Carson household, Mrs. Hughes has a bandaged wrist which means she can’t cook their dinner. She asks Carson to do it instead and rattles off a list of instructions. While he is stumbling around the kitchen trying to prepare the dinner, she’s quietly enjoying the chaos at the dining table. After everything is done, poor Carson is so tired that he falls asleep whilst eating. This must have been Mrs. Patmore’s plan all along – make Carson realize how much work goes into making dinner so that he will stop complaining! 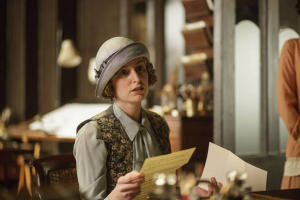 Edith pops into her magazine office to see how things are running and her editor, Laura,  tells her about a new submission by a Miss Cassandra Jones, who wants to start an advice column. They decide to send Ms. Jones some sample questions and see what she comes up with. If those are good, they will carry on with the interview. Before the end of their meeting, Edith invites her to the car race (and also calls Henry Mary’s boyfriend, which I thought was off because I didn’t know they used that term back them).

While the family is at Rosamund’s discussing the changes at the London homes of the families they know, guess whp pops in but Henry. Weird coincidence? He wants to make sure that all the people around Mary tell her that she needs to be with him, but she counters by asking what if people say the opposite. He’s not worried about that, after all, she’s already said the very same thing. At the race track, Tom helps Henry get his car ready and Edith introduces them both to her editor. She also meets the family and Bertie. Tom seems to warm up to Laura, even telling her that he was the family’s chauffeur before marrying Sybil. New romance perhaps? She would be a step up from his last terrible fling. 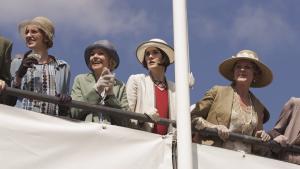 The race starts after Henry steals a sweet kiss from Mary. It is funny the way they start the race – they all assume positions like they’re about to run a race, but run to their cars instead, and off they go! Round and round and round and round and round. The race is pretty close between Henry and Charlie; they are neck and neck but right after the cars pass the stands, someone loses control of his car, crashes upside down and bursts into flames. Bertie, Tom, and Mary rush to the crash site, Mary hoping against hope that this isn’t happening to her again. Turns out, it was Charlie, and not Henry, who wrecked his car. They are not able to save Charlie and this devastates Henry. 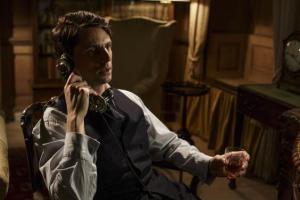 Dinner after the crash is a somber event. While most of them go to bed, Edith and Bertie go to the drawing room for a drink. Henry calls Mary, who speaks to him on Tom’s insistence. Charlie’s death has made Henry realize how short and abrupt life can be so he wants to know Mary’s answer to his proposal. But the events of that day has also pushed Mary into the side of “our lives are too different for us to marry” and she turns him down. She breaks up with him…on the day his best friend died. Awesome. Tom tries to talk her head on straight but to no avail.

Bertie and Edith are Netflix and chillin’ in the drawing room. They seem so happy together, which is different for Edith! And then it happens – Bertie tells Edith he wants to marry her. Before saying yes, she asks if she can bring Marigold with her, but fails to tell him that Marigold is her daughter. Come on, girl! You gotta tell him! Anyway, he says that’s cool and she still says she has to think about it. 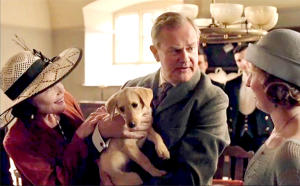 After the family is back from London, they are met by Isobel who hands them Violet’s letter and apologizes for having to deliver the news. In the letter, Violet explains that she needed a change of air and that Spratt would be dropping off a present. Spratt is in the servants’ quarters and doesn’t want to bring the present upstairs, which Carson agrees with. It’s a mystery so the family goes down to see the gift, which the servants are all huddled around. IT’S A PUPPPPPPPPPPY!!!! It isn’t trained yet – that’s why Spratt didn’t want to bring it upstairs. But Robert says, fuck it…she’s adorbs…she’s going upstairs.