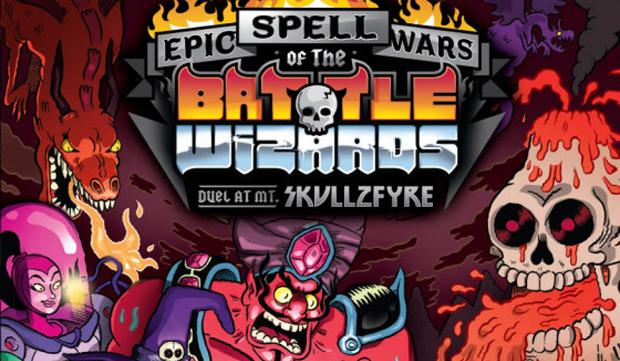 Need something exciting to do with your friends?  Does playing Gin Rummy with your aunt sound like your idea of a sad Saturday night?  If you answered yes, then check out the card game “Epic Spell Wars of the Battle Wizards Duel at Mt. Skullzfyre.”  The game itself is fairly simple and fans of “Superjail” will find the artwork familiar. Fair warning, this might not be the type of card game you want to break out with your grandparents, unless they are the most Metal. 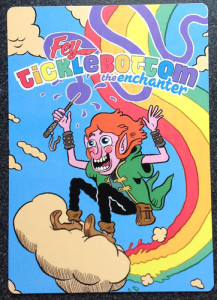 Tell me he isn’t the cutest little soul eater ever…

The game starts with choosing your character, but these aren’t your normal Wizard of the Wood, Fairy Queen characters. Some choices are: “Princess Holiday and her Furicorn”, “Pister the Pissed Wizard”, and my personal favorite, “Fey Ticklebottom the Enchanter”.  So once you get your character, then what?  Well, you wizard in training, you draw some cards and start battling it out by slinging your most potent spells at your comrades until you are the “Last Wizard” standing.  Basically, imagine Harry Potter hopped up on blood with magic that does more than make your enemy sound like a frog.  Spells can be made in any combination of 1-3 and the person with the fewest cards/highest initiative goes first.  For example let’s say that Grandpa Bart wants to play “Midnight Merlin”, he would go before Great Aunt Pearl’s 3 card “Walker Time Ranger’s Festering Gore-Nado” spell.  Each card has a glyph (damage type) and a basic description of what the spell does, which can be based off the glyph type or dice rolls. Once you look at the cards and read through them, the game is simple to pick up (but then again that’s what everyone says about every game, including the Battlestar Galactica board game that takes on average 3-5 hours).

The whole fun of the game is to be ruthless to your friends, so pick one poor soul and mercilessly work to annihilate them.  If you happen to be on the receiving end of a few spells and die, have no fear because the fun isn’t quite over for you.  Each round after dying, you obtain a “Dead Wizard” card, which is pretty much the way the game “rewards” you for being the brunt of your friends’ ire.  These cards work as buffs to make you better and more capable for your next deadly duel.  Ultimately you can play this game as many rounds as you want…the official rules say a winner is crowned King of the Mountain when you have two “Last Wizard Standing” tokens and the bodies of your slain foes fall bloodied and festering beneath your feet.

The hard hitting question-why should you play this?  It’s simple really- this is an entertaining, fast to play, great party game… especially if you have been drinking and want to shout borderline inappropriate spells to your friends (definitely not speaking from experience).  Overall, my thoughts are “10/10 would play again,” so grab your friends, throw on some Slayer and start dueling like true wizards.

Grab your copy of Epic Spell Wars of the Battle Wizards