Never heard of Yurikuma Arashi? It’s from the rather brilliant Kunihiko Ikuhara, who directed some of the best episodes of Sailor Moon and was the series director for Sailor Moon R, S, and SuperS. He then left Toei due to the restrictions placed on his artistic vision, and went on to form his own production company to create Revolutionary Girl Utena. Ikuhara is generally known for his creative and boundary-pushing portrayals of homosexual relationships.

This might go some way to explain why his most recent project’s title translates to “Lesbian Bear Storm“. Yes, this is one of the gayest anime shows ever made and it’s fantastic. First of all, I won’t be going into any plot twists of Yurikuma Arashi,but only commenting on the overall themes and aesthetics, so it’ll be as spoiler free as possible. That being said, here’s the general gist of the show.

Bears have grown sentient and violent. After a vicious war between bears and humans, the humans begin construction on a Wall of Severance to segregate themselves from the bears for eternity. Enter Kureha, a teenager who despises bears after her mother was killed by one who managed to infiltrate the wall, who is currently in a relationship with fellow student Sumika. Two new students join her class in Arashigaoka School, Ginko and Lulu, who are secretly bears in disguise, who intend to eat the humans around them. Can Kureha face the Invisible Storm pressing down upon her?

Boy HOWDY does that synopsis not do the series justice. That’s essentially the first 5 minutes of the show, if anything. 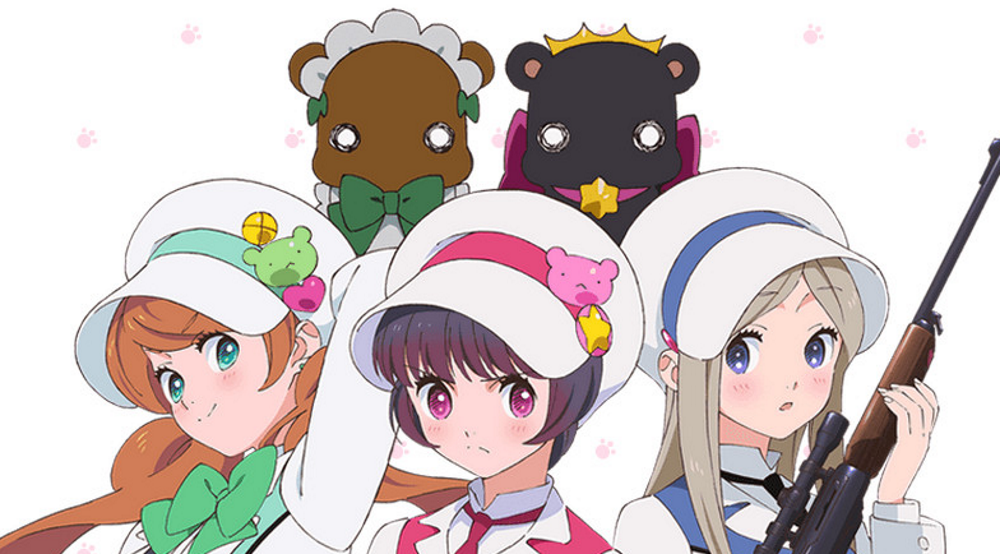 Yurikuma Arashi is all about lesbians. If any character has romantic or sexual feelings towards another in this anime, it’s between two women. In fact, the world is almost entirely populated by women it seems, which is symbolic in that there is no male gaze in this show. This comes to the very heart of what Ikuhara is attempting to do with Yurikuma Arashi.

The imagery is purposefully provocative as a parody of the genre it’s skewering – you certainly step back and say “WOW I can’t BELIEVE they drew that”, but the plot puts these images into a thoughtful context. The result is beautiful and yet, it certainly does not deny that a large part of attraction is physical.

In fact, when it’s the characters in the show objectifying other characters as a target of pure lust, it serves as a commentary for those viewers guilty of it. All this sounds like pretty heavy-handed symbolism, and, in fact, it IS laid on rather thick, but that never gets in the way of how enjoyable the show is to watch. The symbolism is purposefully heavy, along with the religious aesthetics in the show – it creates a sense of the Divine not only in the abstract lore of Yurikuma Arashi, but also in the relationships between characters.

Femininity and homosexuality are celebrated, much in the way that Ikuhara used to both in Sailor Moon and Revolutionary Girl Utena. We can see the influence that these series had on Ikuhara’s later works, and the developing arc of his oeuvre is an essay in itself. It’s fascinating to watch. Ikuhara worked on Sailor Moon during Zoisite and Kunzite’s strange intimacies. He was series director for Fish-Eye’s flamboyant cross-dressing and overt homosexuality. And most comparable, of course, is his directorship of Sailor Moon S, the core relationship there being between Michiru and Haruka.

While the manga of Sailor Moon certainly introduced these women as a couple, it’s undeniable that the series of Sailor Moon S deepened the relationship between them. They had more time, for one thing. What’s important to note that, even in a time where gay relationships were seen as a curio in anime (to this very day, even), Michiru and Haruka consistently felt real, deep, and full of unstated meaning. The series did not shy away from the fact that these women loved each other both emotionally and physically. In other words, they respected these characters and their relationship. 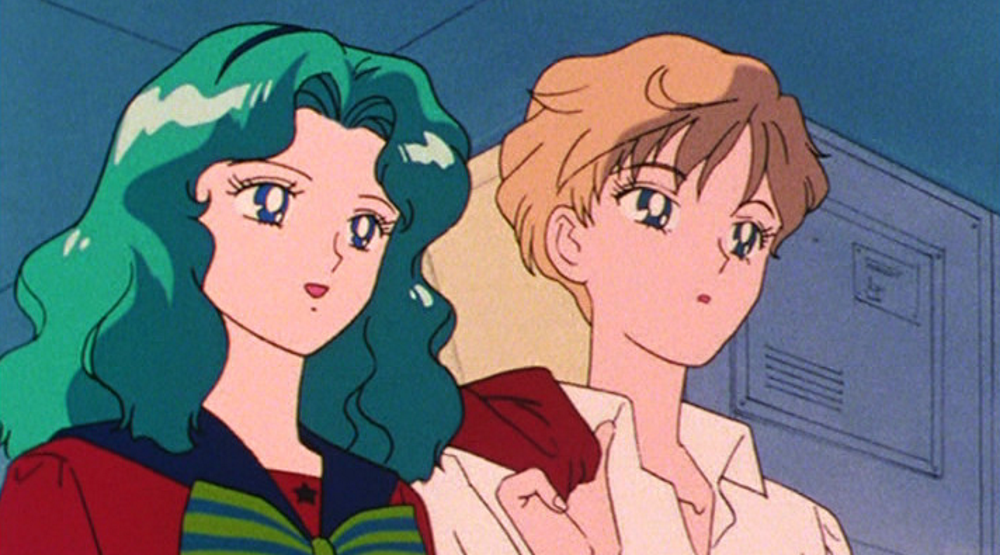 Then, in Utena, Ikuhara continued what was obviously becoming a core focus of his creativity: gender and sexuality studies. Again, his approach to exploring these subjects is extremely humanist, never preachy, and seeks to normalize homosexuality and female empowerment while also skewering patriarchal values in a surprisingly sympathetic light. Give a listen to the Utena reviews on Transformation Sequence for more of a breakdown.

But never mind the heavy stuff, how enjoyable of a show is Yurukuma Arashi to just kick back and watch? Well, very.

This is a very funny show, first and foremost. The main character of Kureha serves as a humorless straight-man in a completely absurd world filled with cute, deadly bears, but the camera is never mugging for a joke, relying on hackneyed “comic” gaffs used ad nauseum in other anime. The plot takes itself seriously, even while patently being deeply comedic. The result is a neat marriage between pathos and humor, gravity and levity.

Ginko and Lulu, the central bears of the show, are both lovable and a little terrifying. As bears, they’re stupidly cute and this humorously undercuts how dangerous they really are. Along with Kureha, they’re fantastic protagonists – I swiftly find myself identifying with all their loves, loneliness, and longing. They all have complex, dynamic personalities, and undergo satisfying character development.

The show also looks lovely. Every character looks perfect and delicate, swathed in a strange pastel glow. The colors really make this all feel like a fairy tail in a pop-up book, something that becomes more poignant as the show progresses. This helps with the strange narrative style here, as it makes the incoherent seem wonderfully meaningful.

In fact, everything seems pregnant with symbolism and direct statements are continually avoided. Rather than being an overt deconstruction of how homosexuality is treated by Japanese society, it speaks of prejudice and segregation in general, of the lust, the logistics, and the beauty of love, of the disparity between obsession and devotion. Best of all, it leaves the viewer to arrive at their own conclusions, right up until the very end.

It’s not perfect, of course – the narrative seems rather disjointed in the first half, as though it’s not quite sure where it wants to go. There are some elements that I wish I could have had just a touch more time with, and while it’s reasonably paced for a 12-episode show, some of the developments earlier on could have been condensed. A few episodes in, I was completely baffled about, well, pretty much everything; unsure whether it was an exploitative piece of trash or a work of genius that went over my head.

As the show went on, however, I saw Ikuhara re-framing the exploration of the perceptions of homosexuality in Japanese media. That’s only one entry point in his narrative in Yurikuma, but ultimately, the message seems to be that, no matter how much society at large tries to ignore homosexuality, or worse be, actively hostile against, love in its own right transcends normative values and societal boundaries, and is all the more beautiful for it.

In a way, it’s both genius and trash, and it’s all the stronger for it. I could totally understand why someone would not like this show. It definitely feels niche and certainly it doesn’t demand attention on the level of, say, Noragami (upon which I dote), but ever since I finished Yurikuma Arashi, I just can’t stop thinking about how wonderful and weird and down-right kitschy it all is.

Go watch Yurikuma Arashi – I hope it’ll stick with you as much as it did me.

Also, have a watch of the opening. I feel like it perfectly encapsulates the softness and the absurdity of Yurikuma. Probably not safe to watch at work, I suspect.