When I was growing up if you missed an episode of your favourite TV show then that was it, game over. It was likely that you would never see that episode until the VHS boxset was released or the show was repeated several years later. To this day there are still episodes of Next Gen, X-Files, and Quantum Leap that I have never seen.

In this miracle age of intertubes, with its Flixbox and Hulu-hoops, this problem has ceased to exist. Missed your show? Just rewind your TV (WHAT!? 8 year old me would have been astounded. Hell, 35 year old me is astounded), watch it on one of the catch-up services or even find it via less reputable sources (GeeklyInc does not condone the use of less reputable sources). These days, if a program exists (or has ever existed), there are ways to watch it.

This series aims to inform you about TV shows from the past couple of decades that you may have missed. These are shows that either weren’t well known or weren’t very popular during their time but I think they’re worth seeking out and maybe binge watching.

Let’s start with a few comedies I think you should check out, because we all enjoy a good laugh. 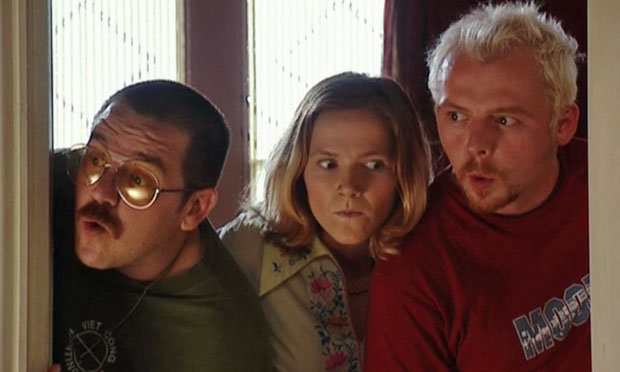 One of my all-time favorites, Spaced was a nerdy sitcom that aired in the UK from 1999 to 2001. There were only 2 seasons (14 episodes in total) so you can knock out the whole thing in an evening or two if you so desire.

The show follows the exploits of Tim (a comic book artist) and Daisy (freelance writer), who pretend to be a couple in order to rent an apartment, and their group of misfit friends, Mike (gun enthusiast), Brian (tortured artist), Twist (fashion aficionado), and Marsha (alcoholic landlady).

Spaced is full of pop-culture references with nods to Star Wars, Jurassic Park, Fight Club, and The Shining to name but a few. There are references everywhere from the blindingly obvious to the small and subtle.

The chemistry between the cast is undeniable, particularly between Tim (Simon Pegg) and his best friend, Mike (Nick Frost). The show has some amazing writing (it’s written by the main stars, Simon Pegg and Jessica Hynes) and the directing (by Edgar Wright) is spot on. You can really see Wright’s directorial style developing over the course of this show.

Spaced has some of the best nerd jokes I’ve ever seen on TV, along with a fantastic soundtrack and the best finger-gun fight in TV history (S2E05).

Wilfred is a strange one – not many people seem to have heard of it or seen it despite the main star being Elijah Wood. It ran from 2011 to 2014 and has 4 seasons. It’s actually an American remake of an Australian show of the same name (If you’re searching online try looking for Wilfred US); I haven’t seen the original version so I don’t know how similar they are or if the Ozzie one is actually better or not.

The show starts with the failed suicide attempt of the main star, Ryan (Elijah Wood), his meeting of the titular star, Wilfred, and his descent into madness (maybe). You see, Wilfred is the dog of his neighbour, Jenna, but to Ryan’s eyes he appears as a man in a dog suit. A man in a dog suit who talks to him. So, is Ryan losing his mind? Is he hallucinating? It would appear so…but is he? That’s the thing about this show, you’re never quite sure what’s real or not.

Wilfred is always getting Ryan into uncomfortable and awkward situations but he has Ryan’s best interests at heart…or does he? He’s helping Ryan overcome his problems while at the same time there always seems to be an ulterior, and often selfish, reason for everything Wilfred is doing.

Although a comedy at the heart of it, as the seasons unfold it becomes quite the mystery, with lots of questions you’ll want answers to.

This show definitely isn’t for anyone who’s easily offended. It contains lots of inappropriate humor, drug use, and sex with cuddly toys, but if that all sounds like good clean fun to you then give it a watch.

Season 2 was just announced, so technically you haven’t missed it, however you may have missed the first season. Silicon Valley returns with Season 2 on April 12th so now’s the perfect time to catch up if you didn’t see it.

I only really need to say one thing about this show – it has the most masterful dick joke I’ve ever seen or heard. It is perfection and I don’t think I’ll ever see another dick joke of this calibre ever again.

Ok, maybe I should give you some more to go on. Silicon Valley follows a group of computer/tech geeks as they form a start-up company based around a revolutionary data compression algorithm. Hmmm, making this sound like something you should watch is harder than I thought.

The inventor of this algorithm, Richard (played by Thomas Middleditch, who you may recognise from CollegeHumor), is offered a choice to sell the software he created for $10 million to the company he works for or to receive $100k from an investor to build a company and retain 90% ownership. The show then revolves around the consequences of his choice and the challenges it presents.

The writing in this show is phenomenal and the group of nerds are actually believable (unlike The Big Bang Theory).Plus, there’s some real nerdy references that aren’t just dropping the name of a superhero or video game (*cough* TBBT *cough*).

If you like clever comedies with great writing and/or dick jokes then this is the one for you.

So there we go, three comedy shows that you may not have seen before, check them out if you can. Let me know what you think, if I can turn a reader into a fan of one of these shows then I’ve done my job.