With Geekly Redux, we revisit our childhood favorites and determine whether or not they hold up. 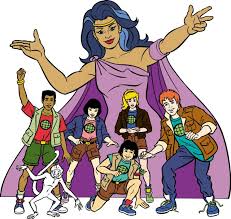 Growing up in Nepal, I didn’t have access to all of the awesome shows kids in the United States had to watch, i.e. Are you afraid of the dark? Doug, Hey Arnold, etc.  I watched random Disney reruns that were usually dubbed over in Hindi.  I watched a lot of He-Man, Teenage Mutant Ninja Turtles, Swat Kats (no one knows about this show…wtf) – okay I’ll stop my trip down memory lane.  One show I watched almost every day was Captain Planet and boy did I LOVE it.

Nepal is a beautiful, but poor country.  Even as a kid, I was aware of the pollution, deforestation, and poaching going on in Nepal and was all about stopping it.  So, you can see why Captain Planet would appeal to a young, aspiring environmental activist.  Those Planeteers banding together to beat the baddies and summoning Captain Planet when needed – I wanted nothing more than one or all of those powers myself so I could rid the world of the terribleness.  This show was my jam.  Heck, I still know all the words to the intro.  So when I decided to do a Geekly Redux piece on Captain Planet, I was excited about reliving my childhood.

Captain Planet and the Planeteers ran from 1990-1992 and The New Adventures of Captain Planet ran from 1993-1996.  The first episode opens with Gaia, the spirit of the Planet being woken up from a long slumber to realize that a lot of things had gone wrong with the planet and pollution was rampant.  She sends 5 magic rings to five chosen youths across the world and each ring bestows upon a certain power. 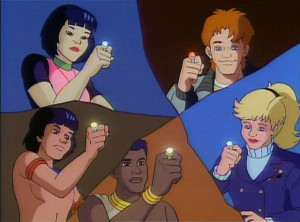 Kwame from Africa: power of Earth.  He is the leader of the group and voice of reason.

Wheeler from New York: power of fire.  He isn’t the smartest and has a short temper.  He also has the hots for Linka and, for some reason, uses words like “toots”, because you know calling a girl “toots” will totally work.

Linka from the USSR, later changed to Eastern Europe: power of wind.  Apparently the word toots worked on her because she flirts back with Wheeler.  SMH.  Keep your options open, girl.

Gi from Asia: power of water.  She flies the plane and is the diplomat of the group.

Ma-Ti from the Amazon of Brazil: power of heart.  He uses his power to telepathically communicate with people and animals, which comes in handy when he needs to urge the animals to get out of danger.  He is the youngest of the group and has a pet monkey named Suchi. 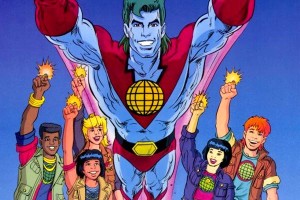 So, does it hold up?

I was so disappointed.  I thought maybe I would still like it and I would spend some time catching up on most of the episodes, but I could not get myself to watch more than 5-6 episodes.  They were bad.  It wasn’t just the cheesy lines but the terrible plots in almost every episode.  Villains do bad.  Planeteers can’t stop them.  Captain Planet summoned.  Captain Planet needs help.  Captain Planet stops villains.  There were two episodes with adult themes – drug abuse and AIDS/HIV epidemic -and while the theme was different, the basic plot was the same.  I did like the fact that the show tried to tackle subjects like hate and ignorance.  I like that it teaches kids that we need to protect the environment.  But, still the series as a whole is bad.   It is so repetitive and has terrible lines.  I mean, come on.  The names of the villains by themselves are awful: Hoggish Greedly, Verminous Skumm, Dr. Blight, Duke Nukem, Looten Plunder??  I can’t. 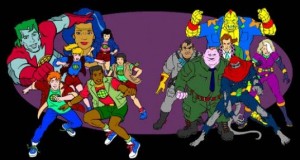 Baby me loved this hippie cartoon where people who loved the environment saved the world from the terrible villains but adult me has had her heart hardened by the real world and just could not get into the terrible lines and plots of this show.  Sorry Captain Planet and the Planeteers but the power is not yours.