As we all know, a Pokemon’s level can be a large factor in determining its power. However, when all the Pokemon are of the same level, how can you make sure your bros are as strong as they can be? The answer lies in Nature, EVs, and IVs.

Each Nature boosts one stat by 10% while decreasing another by 10%. What you’ll want to do is figure out what role (sort of like making a D&D character) you want your Pokemon to play. For Pokemon, you always start with a “race” then pick the “class” based off the races natural ability. For the purposes of this article, I’m going to use the Fennekin I’m breeding named Harper-kun. So my race is Delphox (the evolved form of Fennekin). Looking at its base stats, I know that it has high Special Attack, high Special Defense, and high Speed. The rest of its stats are below average. You can check a Pokemon’s base stats on various websites or in the game using the Super Training menu. The base stats will the be darker spread on the graph. Delphox will be strongest as a fast attacker. I’ll pick Timid as its nature because it increases Speed while decreasing its already weak Attack stat. I could have also chosen Modest because it lowers attack while increasing Special Attack. When looking at a Pokemon’s summary screen, you’ll see the boosted stat is red and the decreased stat is blue. 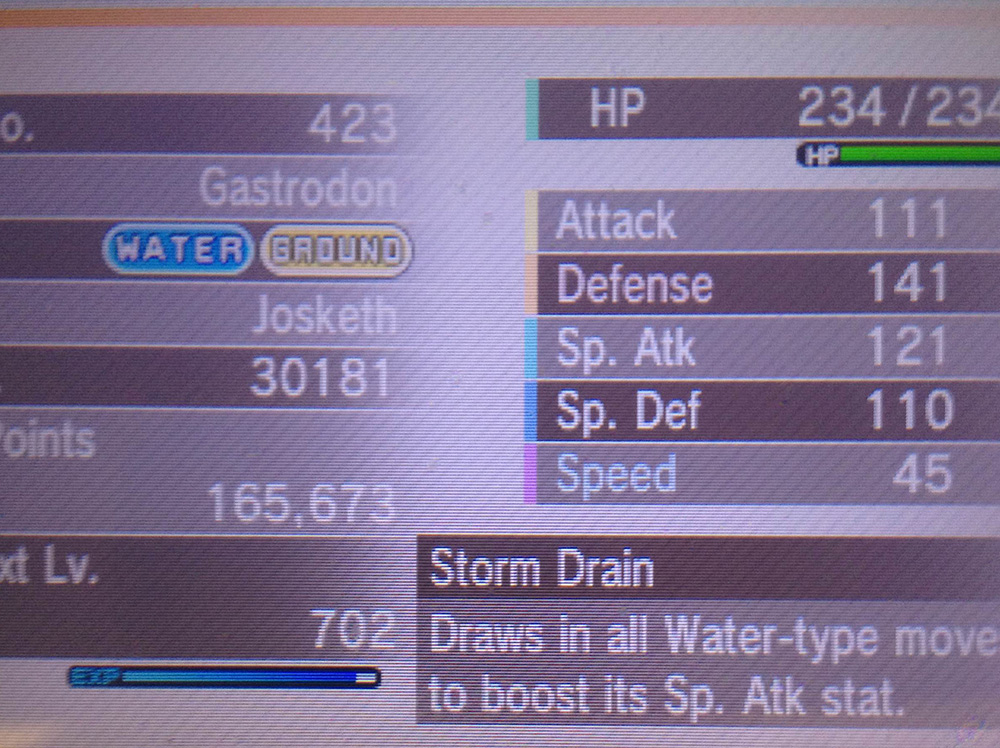 Effort Values are somewhat secret points that will increase a Pokemon stats. Now, the maximum any one stat can have is 252 and you can only apply 508 total EVs to a Pokemon. Every 4 EVs is equal to 1 total stat point. After some math, you can apply 63 total points to a stat if you choose to max it. The application is gradual with level up so you won’t really see them but you will feel it in how the Pokemon plays. Now, for Harper-kun, I’m going to stick to its strong stats. I’ll put 252 in Speed and 252 in Special Attack. Super Training is a great way for controlling your Pokemon’s EVs when you need precise numbers. Horde encounters are great for just dumping EVs into a stat. I’ll get into that in just a bit. The HP Up, Protein, Iron, Calcium, Zinc, and Carbos items give 10 EVs in a stat up to 100. They are expensive, but they also increase happiness which can be helpful for those types of evolutions. There are also berries that decrease EVs by 10. They are the Pomeg, Kelpsy, Qualot, Hondew, Grepa, and Tamato Berries. They also boost happiness. Reset Bags found in super training can completely erase EVs and there is a juice you can make that will reset EVs in Luminose’s Juice Shop made from Kee and Maranga berries. 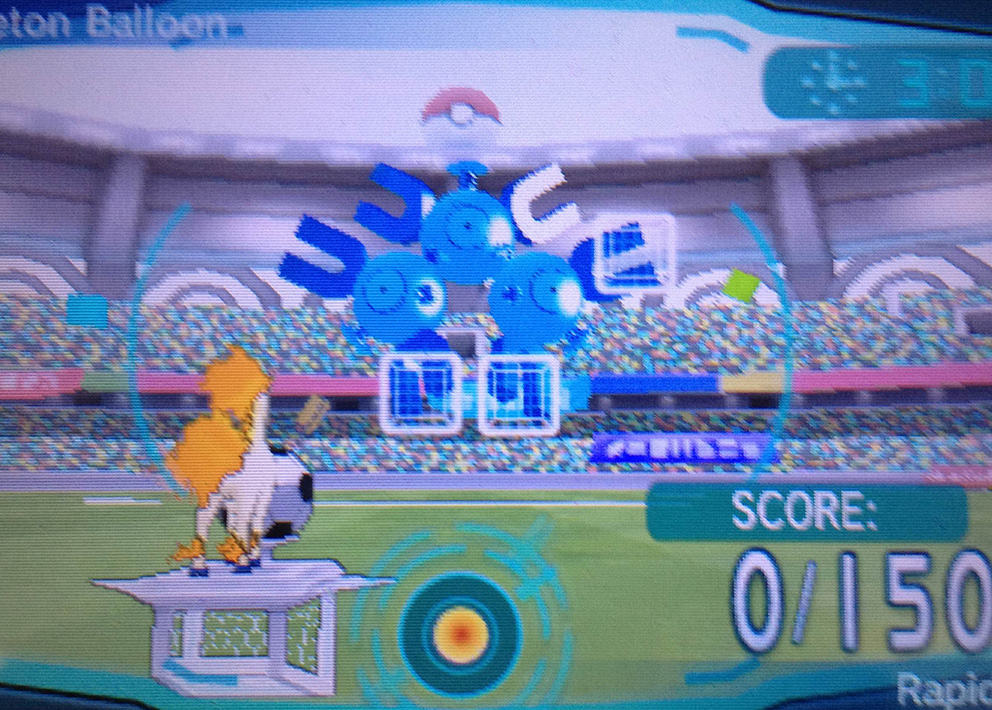 Super training will look a little something like this.

Individual Values are a Pokemon’s genes. They are determined randomly when a pokemon is encountered for the first time. This is how you can catch two pokemon of the same species at the same level and their stats be different even though they share the same nature. There is a convoluted formula to determine stats using IVs but I don’t bother with it. IVs range from 0 to 31. The higher the IV, the faster the stat growth. For the most part, the goal is to have perfect (31) IVs in all pertinent stats. Hidden Power’s attacking type is determined based on IVs. The combination of even and odd IVs have set types associated with them. This can get tricky to breed for, but patience nets you rewards. The only times you’d want 0 IVs in a stat is for getting the lowest possible speed for Trick Room teams. When you complete the game, there is a man in Kiloude City’s Pokemon Center that can tell you your Pokemon’s strongest IVs. 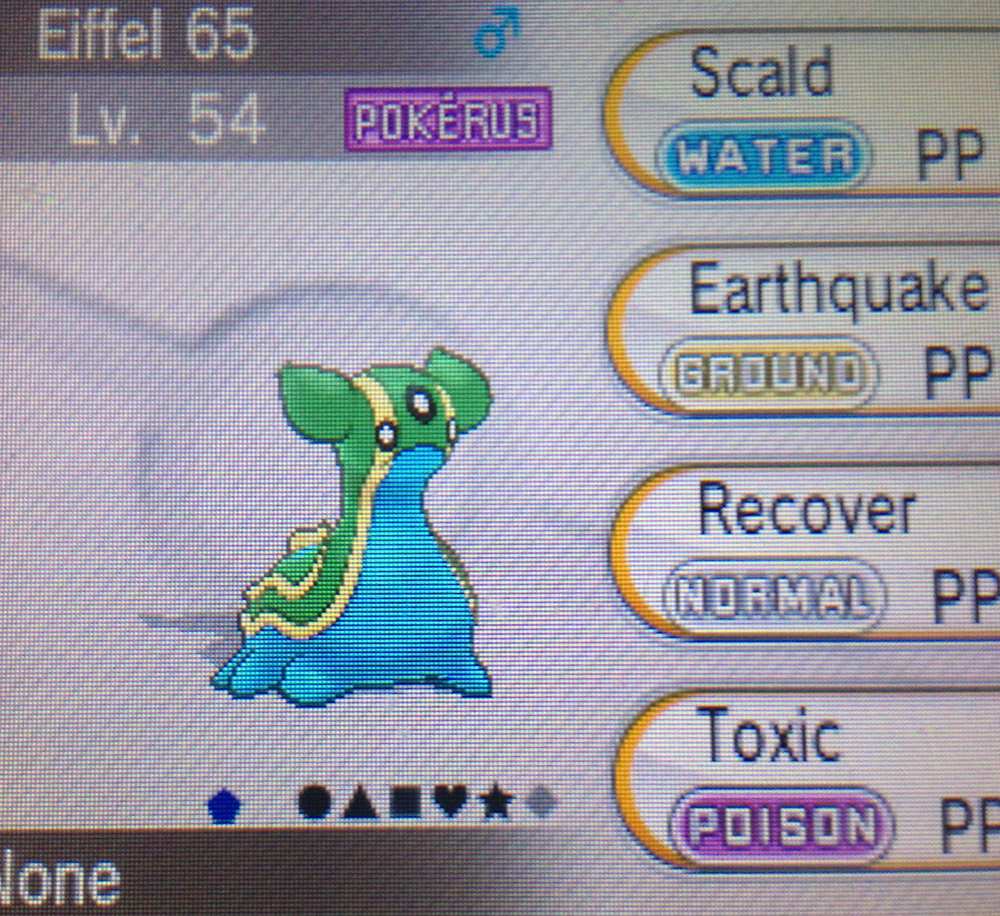 Check out Gastrodon’s IVs marked via the symbols under his squishy blue body.

To get to the town, beat the Elite 4 and head to the Luminose Train station. The professor will give you a ticket and the train will take you directly there. Another great thing is that Friend Safari is also in Kiloude City. The Friend Safari Pokemon will always have at least two perfect stats. Unless you are dealing with Hidden Power, all you need to know is if a stat is perfect or of a zero value. When the man in Kiloude judges your stats and says that X stat can’t be beat, that means it is perfect. He will also list all the perfect stats as well if applicable. To get ideal or perfect stats on a Pokemon, you just have to breed which I will breakdown in a moment. Okay, let’s adventure into making a real powerhouse Pokemon from the ground up.

Okay, so to make this powerful Fennekin, I’m going to want to find a female Braixen in the Friend Safari with the Magician ability. I like Magician better than its stock ability to Blaze because Magician lets you steal items when you attack and I’m rude like that. Personally, I bring my Gardevoir that has the trace ability and a Parasect when I’m looking for parents to breed. Trace will help me ensure that the Braixen I catch will have the Magician ability. When Trace activates, it shows your Pokemon’s ability then it fades into the ability the other Pokemon has so be sure to pay attention so you can make sure you see the right one. As a fun aside, I’m a bit of an artist so I’m going to be catching my Lady Braixen in a Dusk Ball because of Harper-kun’s dark past. Once I find my prey, I use my Parasect’s Spore and False Swipe combination to help secure my capture. Be sure to catch a LOT of male Braixen.

At this point, we have our female so we run to the Kiloude Pokemon center and judge all of our Braixen. A great tool to help keep track of which stats are perfect is to use the little symbols on the summary screen. I list them as HP/ATK/DEF/SPA/SPD/SPE so as I learn which ones are perfect, I tap the symbol to darken it. Now to breed.

The items you are going to want to have before you breed are the Everstone and the Destiny Knot. The everstone will keep the nature of the Pokemon it is attached to and the Destiny Knot will ensure that 5 of the 12 IVs of the parent will be passed down.

Now you begin the long process of breeding. I’ve been fortunate to have been blessed with some 4, 5, and 6 perfect IV Ditto so this step has been condensed heavily for me. You want to breed and judge the babies and keep the little ones that have more perfect stats than the rest. So if both parents have two perfect stats in 4 different stats, keep the one resulting baby that has 3 or 4 perfect stats. If you were looking to add egg moves, attacks that can only be learned via breeding, you’d want to do that first.

Pro-tip: The Pokeball that the mother is in will be the Pokeball for the offspring. So, when you get your breeding groove down, you can get really stank with the Pokemon choice like I’m doing with Harper-kun.

We have finished our heaps of breeding and now we have are precious little Harper-kun. Harper-kun has perfect stats in every stat except Attack. This is my choice because he won’t be using moves that are derived from the Attack stat so it is of little consequence. Now I can EV train the little booger. To help aide in gaining EV points, I’m going to infect this little munchkin with Pokerus. This highly contagious virus causes your Pokemon to gain double the EVs from battles. It can be hard to initial get a Pokemon to catch it from wild Pokemon, but if you are lacking in it, hit me up on twitter (@josketh) and I’ll send you a Pokemon with it. Just remember to keep your Patient Zero Pokemon locked away in the PC so you can keep infecting your newborns. Anyway, turn off your exp.share, get your Pokemon nice and cozy with the sick one and do a few battles. Keep checking to make sure your boy is sick then its time to start training.

I bought the Power Items in Kiloude’s Battle Maison. They can speed the process as well if you are down to grind for the battle points. Anyway, grab yourself a Pokemon with Sweet Scent and your strongest Pokemon with a AoE attack like Rock Slide, Petal Blizzard, Earthquake, etc. For this particular Pokemon, we are focusing on Special Attack and Speed. I use the Ice Cavern hordes of Vanillite and Smoochum for Special Attack and the Route 16 hordes of Murkrow for Speed. Make sure you have the Experience Share on and you run away from all the hordes that don’t give you the EVs you need. With Pokerus and the Power items, you’ll get 50 EVs for each horde battle so after 5, you’ll be at 250. You can either do an extra horde battle or Super Train for those last two. Once you finish grinding 252 into Special Attack and Speed, you can put the remaining 4 EVs in whatever you want.

Now that my Harper-kun is fully EV’d, I can just grind it’s level up and teach it the attacks I want. The moves you want your Pokemon to know should reflect the role you want the Pokemon to take on. For Harper-kun, I’m going to use Calm Mind, Fire Blast, Psyshock, and Grass Knot. He’ll hit hard and fast, just the way daddy likes.

Though the process was geared toward one type of Pokemon, the methods are the same for any breedable Pokemon you’d want to use. The breeding can be tedious I know, but its worth it to get a little bit of an edge and makes for a great time killer if you are bored at work, the gym, the bus, or between classes. If you have questions on great horde spots for EVs, breeding, or anything Pokemon related, tweet at me. Also, hit a brother up if you need some Pokerus, help with egg moves (I’m impossibly good with Smeargle), or “trash breeds.” I usually end up with a few leftover Pokemon that don’t have the stats I want but could be helpful to someone else. If you see me tweeting a lot about breeding projects and you want in, just give me a shout so I remember to save one for ya. I hope I covered the process with enough detail. If you have questions or need some tips to help speed up the process, hit me up and I’ll give you all information I have.