Killing Gravity is a novella by Corey J. White that is hopefully the first in a series featuring Mars, a void witch, space witch, a living psychic weapon. She and her…pet…a creature named Seven, are the result of heartless military experimentation by a would-be dictator-general, on whom she wants unending vengeance. He wrecked her childhood (and, by extension, her adulthood) and caused her to lose Sera, the only person in those cells who loved and cared for her.

Okay, the synopsis may not be the most original thing in the galaxy, but it shines in the originality of its details rather than its broad strokes: the nuances of its settings, the quirks of its characters, and the little details of the technology it’s predicting. On top of that, the execution is delightful. At first I was a bit disoriented with the sheer amount of editing that seems to have gone on with this story. Every single extraneous description has been hacked away, leaving big chunks of action or exposition to be suspended by only the barest bit of narrative. It’s not terse, or—god forbid—Hemingwayesque; it’s just ruthlessly efficient. 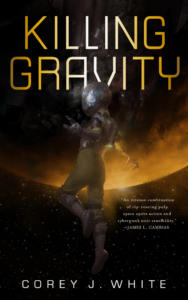 Well, that’s one way to make a page-turner, and you won’t hear me complaining. Things start out in media res, with Mars awaiting a response to her distress call with her persnickety pet tucked inside her suit. Her straights are not as dire as the klaxons would suggest: this is mostly part of a plan. Mostly.

While it’s sometimes nice to be deceived by books that would have you think it’s all going to hell only to reveal, at the very end of the chapter, that—ha ha!—it was all part of the hero’s master plan, I do find that this very cinematic take (think Ocean’s Eleven) on writing can get old. It’s one half of a rule of writing that’s very hard to see past once you know it: namely, that if the hero explains a plan, it goes wrong, but if it isn’t explained it goes off without a hitch. It’s a way of creating suspense, but it’s used so often that I get bored anyway. Here, though, we don’t get an explanation (that aforementioned brevity at work) and things go very clearly wrong. It’s great! I don’t know what’s going to happen and I love it.

Things going wrong also means that the heroine isn’t a perfect Mary Sue in command of every possibility, and gives other characters a chance to shine. The ragtag crew of the Nova and the other secondary characters get to be clever and volatile and affectionate in ways that suggest that they have real lives and real stakes, rather than just as props for Mars’s twin quests of reuniting and revenge. They’re a bit like the crew in Firefly, weird and grumpy and familial. (This whole story is a bit like Serenity, actually, but only a bit. Mostly enough so that if you like one, you’ll like the other, but not as a ripoff.) It’s not an easy feat to accomplish in so few pages (this clocks in at just over a hundred), but this feels like a real universe, not an extended metaphor the way some SFF does.

To me, great sci-fi has to have three things: it has to say something about the present, it has to make a genuine attempt to foresee something about the future, and it has to contain at least one creation that makes you go “oh, right, duh of course that’s a logical next step in technology.” For Killing Gravity, I would like to point out that of course the logical extension of a number of current technologies would be a robot that holographically displayed the appearance of whomever was controlling it (or using it to make a call). It’s like Skype, but if you didn’t have to awkwardly hold up your screen beside you. It’s small, but then, I don’t expect all SF to have technology as the centerpiece. In fact, it works better like this, when it’s a clever little throwaway, just like the idea of shampoo that smells like fresh bread (11/10 would buy).

As for reflecting on our present and future, it definitely gives some side-eye to the military industrial complex. That might be low-hanging fruit—military villains intent on treating people as weapons are as old as science fiction itself—but it works well enough here. There’s also some low-key commentary on gender and sexuality—off-handed references to triple marriages and open relationships abound—that I appreciated for their uncomplicated ubiquity. Add to it the general sense that the universe will go on being kind of crappy but not hopeless—neither u- nor dystopia—and I spent 100+ pages being pleasantly surprised over and over again by this little gem. Definitely worth a buy and a follow-up.

Killing Gravity comes out on May 9.