There is a machine…the machine of death. To discover your fate, all you must do is give the machine a drop of your blood. The only catch? The machine delights in obfuscation. You give the machine a part of your self and it gives you “Old Age.” But will you die peacefully, 95 years old in your bed? Or at a more vibrant 32, the victim of an elderly person’s questionable driving skills? 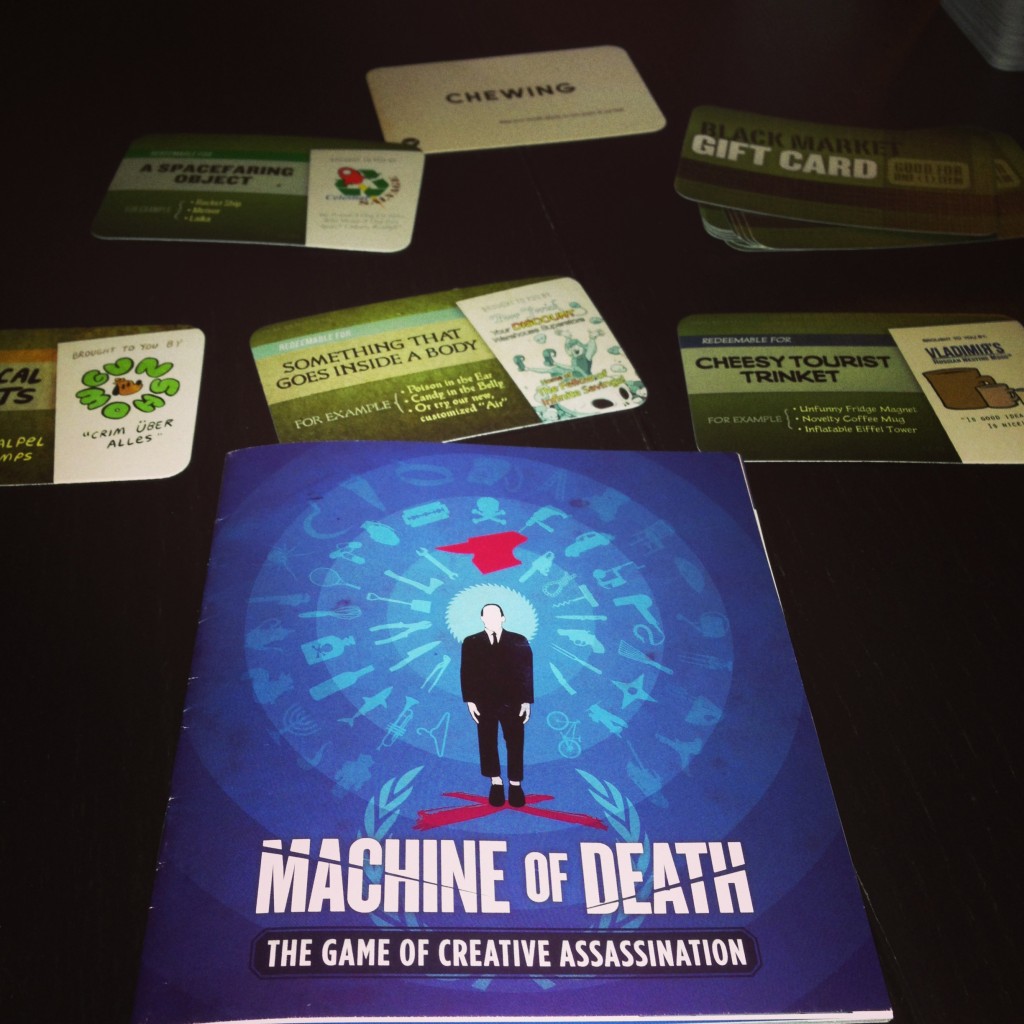 This is the delightful but macabre backdrop for one of 2014’s newest board games. Based on the world woven in the science fiction anthology bearing the same name, Machine of Death is a storytelling game that pits the players (aka assassins) against a target. The goal is to successfully assassinate the target in a way that is in line with their Machine of Death death prediction which is drawn from the death pile at the beginning of the round. Assassins are assigned Black Market Gift Cards with various resources; these are the assassins’ inventory and include things like “something from a graveyard,” “rusty medical instruments,” and “a specific walrus.” Players are also given key information about the target, like that he is obsessed with butterflies, or that every Tuesday night she can be found skateboarding in front of an abandoned warehouse. Once the players have taken stock of their inventory, decided on an assassination plan that uses their resources, and have assigned a “difficulty level” to each step of the plan, the (90 second!!) timer starts and their assassination begins to unfold.  This is where things get dicey.

Let’s say that your group has the three Black Market Gift Cards mentioned above and that your target’s Death Card is “chewing.” You also know that your target likes to skateboard but is terrified of needles. You create a plan to chase the target on electric skateboards with a rusty needle (satisfying your “rusty medical instruments” card). You will chase him into an open grave in a nearby graveyard (“something from a graveyard”). Waiting inside the open grave? You guessed it, a vicious man-eating walrus that your assassination team has planted. If you are successful, the target will be masticated to death by the evil walrus and you win the game! In order to complete your plan, you must decide on the difficulty of each part of the plan and roll to see if you are successful. Your group has decided that it’s pretty likely that you could chase your target with the rusty needle, so you give this a difficulty of 2. However, getting him to go into the graveyard and directly into the correct empty grave? That’s much harder, so you give that a difficulty of 5. Once the timer starts, the first person rolls the dice to see if they can beat the difficulty level of 3 decided for the first part of the plan. Sadly, they roll a 2 and your plan is foiled! At this point, you must choose a new Black Market Gift Card at random from the draw pile and create a completely new plan on the fly, all within 90 seconds.

Machine of Death has several game modes to choose from depending on the strengths and preferences of your friend group, including Head to Head mode (a Cards Against Humanity-esque version with a chief who picks the best assassination plan), Co-op mode (all “assassins” decide on a plan together), Cutthroat mode (players can assassinate each other!), and The Day Off mode (the goal isn’t to kill someone, but to accomplish a simple task with your assassin skills!).

I was able to try this game for the first time this weekend with a few friends. Considering the fact that it was our first time playing and we had been imbibing a bit (hic!), we decided to attempt the game in Co-op mode. My first impression of the game was that it reminded me of a skill challenge in Dungeons & Dragons. You are using your specific skill set (in this case, Gift Cards) to accomplish something, and you have to roll dice to pass a certain difficulty level in order to be successful. Coming up with the assassination plan was super fun. My group got very involved in created a perfectly crafted plan, but once the timer started going our plan went to hell. We failed our first roll and had to substitute in a random new Gift Card into our plan! Lots of yelling and nit-picking of the new plan was involved, and before we knew it our time was up. We had failed our mission. Worst assassins ever! But the second the initial game was done, we were hungry to kill more targets…I mean play the game again.

Machine of Death is an excellent game to add to your board game arsenal. It’s creative, strategic, not super complicated to explain to new players and works well as a (small) party game. Additionally, I think Machine of Death is a great baby step for people who may be interested in role playing type games, but intimidated by performing on the spot. I’m already plotting ways to talk my fellow Machine of Death assassins from this weekend into playing Fiasco. Though Machine of Death: The Game of Creative Assassination is currently only available to people who backed the endeavor on Kickstarter, the creators say that it should be available for retail very soon! So keep your eyes peeled for this game of adventure and murder (unless your Death Prediction is “board games”)!