Remember that magical girl anime where a team of five color coordinated young girls discover they are warriors who transform using makeup compacts into frilly outfits with elemental attacks? You know, Glitter Force?

A quick introduction: Glitter Force is the English dub of an anime called Smile! Pretty Cure!, which is the ninth in a long running series of magical girl anime called Pretty Cure. Each season features a new set of magical girls with some overarching themes, characters, and styles. You can probably understand why after doing over a dozen series, the people who make Pretty Cure have got it down to a fine science. It’s not too surprising that Smile! Pretty Cure! was picked up by Netflix for an English dub, since Netflix is fairly well known for being very calculating in the properties it picks up and creates. Glitter Force feels like it was created in a lab, with every element of the show scientifically designed to be the most intense it can be.

For this article I’ll be mostly talking about Glitter Force itself, not the Japanese version and not the rest of Pretty Cure, though obviously a lot of the elements are from the original. Partly because there are thirteen seasons of Pretty Cure and I just don’t have the time to get into it yet, though I promise I will one day. And partly because Glitter Force is a strong entity of its own, and an excellent chance to discuss the tropes and themes of magical girl shows, and the influence of Sailor Moon. And there will be minor spoilers for the first season of Glitter Force, but it’s not a particularly complex show so I wouldn’t worry if you’re on the fence about it. 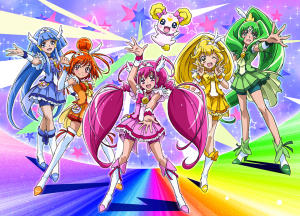 Last month I discussed how Sailor Moon was the first to use the Super Sentai (team of heroes) format for magical girls. That kicked off an entire generation of magical girl team shows, not just in anime but western animation as well. Twenty five years later that format as well as a number of other styles, choices and tropes are standard for magical girls, and especially notable in Glitter Force.

First up is that team format, because in any show you need a good team of characters for your watchers to root for and care about. Side note: I generally don’t mind the localization done in Glitter Force, but the characters are given cringe-worthy American names: Emily, Kelsey, Lily, April, and Chloe. And like any good magical girl show, they are color coordinated, Kelsey the red one uses fire, Chloe the blue one uses ice etc etc. Like I said, they aren’t reinventing the format, just distilling it. And they all properly have different personalities, though not very original ones. Emily is the slightly ditzy romantic, Kelsey has a personality as fiery as her powers, Chloe is a model student (the blue ones always are), and April is tall and athletic. Lily is the only remotely original character: she’s artistic and loves comics, is incredibly shy, and cries at the drop of a hat. Again if it sounds like I’m complaining about all this, I’m not.  athletic sports news There’s something very genuinely fun about Glitter Force that kept me watching, despite never being very surprised.

I’ve gotten a bit ahead of myself, let’s talk for a second about just where the Glitter Force got their powers. On her first day at a new school Emily meets a strange little creature named Candy who is a pixie from Jubiland, the land of fairy tales. Candy is there to find the five members of the Glitter Force who will save Jubiland’s Queen Euphoria, who is in a coma after using her power to fight off the Emperor Nobu. Nobu and his minions, who are classic fairy tale villains like the Big Bad Wolf, are out to give the world the ultimate unhappy ending. Sound familiar? It’s almost note by note the same origin story as Sailor Moon. Ditzy girl with nonstandard colored hair meets talking cute thing who gives her magical powers and a mission. It surprises nobody but the actual characters that the five members of the Glitter Force are the only people in this town who have multicolored hair. You’d be hard pressed to find a modern magical girl show that doesn’t start that way.  Along the way we meet Candy’s brother Pop, who is a mighty warrior despite being a tiny lion. I had a genuinely emotional moment in an episode where Pop has to leave Candy in the human world, but tells her that she is brave and strong to stay with the Glitter Force. For those of you that don’t know, I spend most of my time living around the world, and while I don’t get very homesick the one person I always miss is my sister. I sympathized a lot with siblings saying farewell, even if I’ve never had to run off to shoot sparkles at a clown monster. Yet. 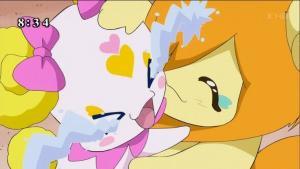 This children’s show gets me.

Transformations are an integral part of any modern magical girl show. A big part of what kept me watching was the transformations because they are DOPE AS HELL. I am a sucker for a good transformation sequence any day, and Glitter Force delivers in spades. Just like Sailor Moon, they use makeup compacts to transform using Glitter Charms (I will get into the importance of this later) and by yelling “Glitter Force Makeover!” I’m not ashamed to admit that it got me amped up. Every. Single. Time. There are sparkles, fire, snowflakes all over the joint, and all of them get insanely impractical hairstyles that burst out of their head. It’s pure visual candy and I was all over it. The outfits clearly take their cues from Sailor Moon, featuring tiaras, bows, boots and a whole lot of frills. Probably my favorite detail of their outfits is that each of the girls get shorts under their skirts, thus eliminating any possibility of panty shots. I should note that the animation in Glitter Force is not particularly groundbreaking or amazing, but it is colorful and clear, and that really comes through in the transformations. On top of those transformations, near the end of the season they receive a second transformation, their Princess Mode, fueled by Pegasus wands, rainbows, and (no joke) an explosion behind them. It’s the concentrated essence of transformation sequences, and it fills my trash soul with glitter and light. 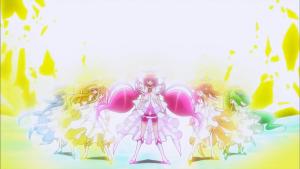 Try and not love it. I dare you.

It will surprise nobody that merchandising is a big part of Glitter Force, and is probably the source of my only main gripe with the show. I’m not particularly against merchandising, it’s a fairly necessary part of anime and especially kids shows at this point. Sailor Moon still sends oodles of merchandise to this day.  But where Glitter Force loses points with me is that the items the characters use in the show are clearly designed to look just like the associated merchandising items in real life, and thus look terrible. The Glitter Force are in charge of collecting Glitter Charms to put in the Glitter Chest, which looks like an incredibly tacky piece of plastic. And the Glitter Charms are random objects like strawberries or stars, the use of which is often shoehorned into the plot to justify their “Gotta catch em all” vibe. The entire plot device screams “Buy this! We spent very little money designing them!” A lot of calculated design obviously went into character design, it’s a shame that energy wasn’t used on making the items look less like something I’d lose in the bottom of my purse. 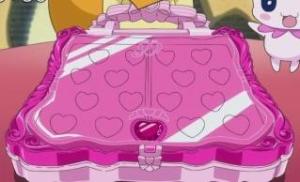 What an arcane object of immense power.

The extent to which the makers of Glitter Force have nailed down every weird detail of magical girl shows is impressive. In Sailor Moon it was never addressed why the poor residents of Juban never remember the constant monster attacks, while Glitter Force‘s villains set up a “negative space” that puts everybody but the Glitter Force into a semi unconscious state. Need a good way to kill time while your magical girls have important revelations? The Glitter Force can only use their attacks once per transformation! For no reason that’s ever addressed. Original Japanese anime shows the girls going on a trip to Kyoto? Now it’s the “Pan Asian Expo” that just happens to only have Japanese things. Glitter Force is also notable for having zero romantic plot lines, partly because the girls are younger, and the only time it comes up is when Emily confesses to having a big crush on Peter Pan.  It’s certainly less messy than some problematic romantic elements in other shows.  Looking at you Sailor Moon and Cardcaptor Sakura. 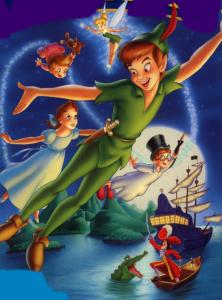 Although I guess he does tend to abduct children.

Glitter Force is a lab grown, carefully planned anime that’s the result of years of refining the magical girl format, and it’s still incredibly enjoyable, if predictable. I would highly recommend it to somebody who was looking into the genre for the first time, especially for kids. So if you have kids, or if you just want to get some good old fashioned escapism throw on Glitter Force. Just don’t be surprise if you find yourself yelling “Glitter Force Makeover!” in the bathroom mirror.

Moon Girls is a monthly column for GeeklyInc. where Steph Kingston discusses Magical Girl anime and TV shows.  Get a hold of Steph on Twitter @StephOKingston or stephanieokingston@gmail.com
Amazing banner art by Kym Stonick, you can find her @kymcattys or http://kymstone.tumblr.com/