People have been clamoring for a Harry Potter anime since approximately 10 minutes after the invention of animation. And here I am, knocking on your internet door to tell you the good news: all the magic of Hogwarts can be found in anime form with Little Witch Academia. 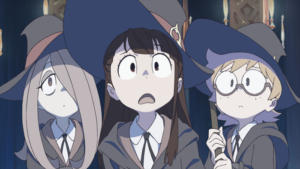 Little Witch Academia started as a short in 2013 that Trigger produced as part of a project funding young animators. It’s a 26 minute film that tells the story of Akko, a young witch, and her friends Lotte and Sucy, at Luna Nova Magical Academy. Little Witch Academia manages to pack more creative design, style, character development, and action into 26 minutes than most shows fit into an entire season. Every minute is dripping with beautiful animation and never wastes a second on anything but fun. A successful Kickstarter campaign funded a second short film: The Enchanted Parade, which gave us 55 more minutes of Little Witch Academia goodness and expanded the world. And the good news keeps rolling: just announced is a TV show coming to a streaming service near you!

The world of Little Witch Academia is a detailed and imaginative take on your standard European vaguely medieval fantasy setting. It’s familiar enough that you can slip into it and enjoy what makes it unique and beautiful. The characters all have distinct designs and personalities, and the writing is smart and funny. Akko, Lotte, and Sucy are adorable and supportive friends even when they disagree and the background characters round out the story nicely. There’s enough unique aspects to the magic of the world to keep it interesting, especially in The Enchanted Parade when we learn there is a mundane world outside the Academy. 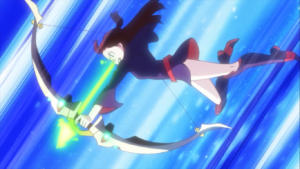 A short review for a short series, but you’d be hard pressed to find a more fun set of short films on Netflix and they really just need to be watched. Luna Nova Magical Academy can give Hogwarts a run for its money any day.