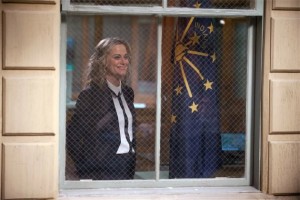 When I first started watching Parks and Recreation, I didn’t like it all that much.  Leslie annoyed me a little.  I thought Andy was weird.  Did April have to be that negative?  But I stuck with the show nonetheless and I am really glad I did.  In the last 6 years, Parks and Rec has become one of my favorite shows and I have come to love the same characters that turned me off at first.  Episode 12 worked in a series of flash forwards, which start when Leslie hugs the person (is Leslie magic?).  These flash forwards show what the characters ended up doing with their lives couple of years down the road (more for some characters).  I watched this episode at work so I had to try and keep the sobbing to a minimum but I thought it was a great episode to wrap up a great show.

Since they are all moving on to different places and/or careers, the gang is at the Parks and Rec office for a “walk down memory lane” – to celebrate everything they have done together as a group.  When Leslie says everything, she means EVERYTHING.  She’s going down a list of their accomplishments, complete with a musical number performed by Leslie and Garry.  The rest of them really just want to shake hands and be done with it but Leslie ain’t having that.  At that time, a man walks in and complains about a swing that has been broken for 3 years.  Leslie is like “YASS – lets go fix this shit one last time!”  Garry walks in ill-timed for the musical piece (“Come on Garry, you’re mayor now.  Have some dignity.” – Tom) – but he earns 5 points for Hufflepuff (always love a Harry Potter reference) for remembering the Parks & Rec procedure for fixing something.

Donna: With her real estate business booming (coffee and marijuana has people buying quickly and irrationally), she has been using her commission pay for adventures in far flung places with her husband (3 week trip to the Amazon sounds amazing).  When she hears Joe complain about the lack of funding in schools (they just don’t teach math anymore!), she decides to put her money to better use.  With the help of April, she sets up a non-profit called, wait for it, Teach Yo’ Self!  AHHHH How amazing is that name??  I would definitely donate $1 million to that organization….good think its fake because I don’t have $1 million.  Later, when Tom finds out about Donna doing non-profit work, he’s so let down until he sees that she still got that BLING!

Craig: Craig is a singer at Tom’s bistro, where he meets and later marries Typhoon!  And, who is Typhoon’s best man?? OMG ITS RON SWANSON!  I forgot I was at work and definitely shrieked at this moment.  I knew they hit it off at the salon.  I can just imagine Ron and Typhoon hanging out.   It is best.  Typhoon and Craig grow old together and its the sweetest.  Also, have you all seen Conan and Billy Eichner join Grindr because its amazing and you should – https://www.youtube.com/watch?v=dh-mZPtTdpc. 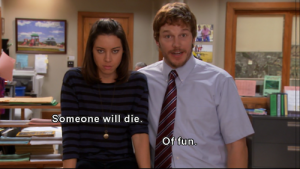 April and Andy: First of all, Andy is going to miss all the food places in Pawnee.  You know, Taco Bell, KFC, Pizza Hut (is Parks & Rec sponsored by the Yum Brands?  Probably).  He is also going to miss Leslie.  What will he do in DC without all of these things??  In the flash forward, we see that Andy really really really wants kids (I wanna put a babe in you babe), probably because he is a big kid himself but April is not so excited about this.  She feels like her life is perfect already and having kids will just mess it up.  And kids usually are the opposite of parents, so since Andy and April are cool already, their kids are going to be dull and terrible.  Leslie tells April that no one has a perfect life and “you have kids because Andy and you are a team and you want to have some more team members.”  This talk must have worked because APRIL IS HAVING A BABY Y’ALL.  In full Halloween makeup.  In Pawnee.  They go through a couple of names before settling on Jack.  And later we find out that April is preggo again!  I really want them to do a spin-off show of Andy and April as parents.  I would watch that shiz.  Also, Andy has a new character: Sergeant Thunderfist, M.D. 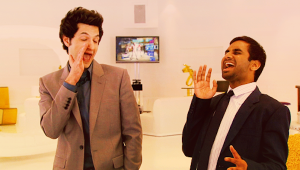 Jean Ralphio: I was like “well I am not surprised Jean Ralphio is dead.”  But really he’s not really dead and him and his sister are trying to pull an insurance scam.  But they get noticed and try to run away to Tajikistan.  Solid plan. 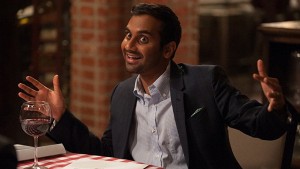 Tom: Tom is expanding Tom’s Bistro into a line of 20 restaurants across American (but he still won’t heed Ben’s advice about adding calzones to his menu.  Come on Tom.)  The economy tanks (who could have predicted that the country would run out of beef?) and he loses EVERYTHING (probably because he didn’t add calzones).  He is swaggerless.  He had to sell his pocket square collection.  He is basically a caveman now.  Lucy tells him that he will find a way to climb his way back up to the top, and he does with his best selling book – Failure: An American Success Story.  In the book, he lists 7 types of successful people: the Andys, the Aprils, the Leslies, the Toms, the Rons, the Bens, and the Donnas.  But the ONE type of person who do not want to be like is the Garrys.  Later, Ben mentions that he took the quiz in the book that tells you what kind of successful person you and that he got a Tom – Tom’s world crumbles and tells Ben to take the quiz again.  He leaves to calibrate the quiz because Ben CANNOT be a Tom.  NOPE.  He also has a new book – Failing 2.0: Failing to Fail. 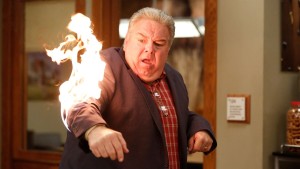 Gary (or Jerry, Garry, Terry): After his time as the interim mayor is over, Gary is actually officially elected as the Mayor of Pawnee.  Then he is reelected for the 4th consecutive term.  Then he is reelected for the 10th consecutive term.  Pawnee loves Gary.  They have a party for his 100th birthday, where is surround by Gail (who looks fantastic), his children, his grandchildren, and his great-grandchildren.  He dies on his 100th birthday and he is awarded the Indiana Notary Association’s highest honor – a 20 stamp salute.  Oh and they spelled his name wrong on the tombstone.  Classic Gary.  Oh and also, Brandi Maxxx is the President of the City Council. 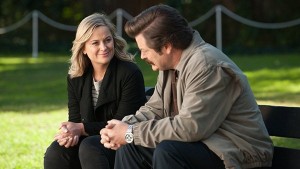 Ron: He is going through a personal crisis.  He says that he is at a personal crossroad.  Even through the financial turmoil, Very Good Building is flourishing – so he quits as chairman (not before telling his Von to stop being so emotional).  Taking Ben’s advise, he has sold his gold and diversified – by buying 50% of Lagavulin Distillery (guys, its a real place on the island of Islay in Scotland…I want to go to there).  Now he doesn’t know what to do with his life because he feels like he has done everything he wanted to, and so he has come to Leslie for advise.  This moment is testament to the progression of their relationship and how far their friendship has come.  Ron used to be the “I only need me.  Anything I need, I can handle myself” person but now he has come to realize that asking for advise/help is not a terrible thing.  Leslie tells him that she will think about it and get back to him.  When she does call him for a meeting, it is at the national park she helped establish in Pawnee.  She tells him that she moved some people around and now the Superintendent position of this park was his for the taking.  When he starts to protest about working for the federal government, she tells him that he with this job he will “walk around the land along, live in the same town, work outside, and talk to bears.”  Ummm…can I have this job?  And when he questions his qualifications for this job, she tells him that his qualifications is that he is Ron Swanson.  Yup.  DONE.

Leslie and Ann: Ann comes back to Pawnee for a reunion and Ben puts together.  Everyone is at the Parks & Rec office, just what Leslie was wishing for.  Ann and Chris are moving back to Indiana, trading the Wolverines for the Hoosiers (but everyone knows that the Louisville Cardinals are the best – Go Cards!).  And Leslie and Ann are hoping that their kids will fall in love but in order to do that, they have to act like they are against it.  They know the rules of a rom-com. 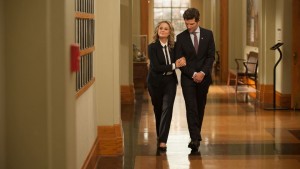 Leslie and Ben: Ben is a Congressman and JOE BIDEN IS PRESIDENT.  And they all play charades together!  OH LAWD!  My kinda party.  I wonder if Joe creepily whispered into Leslie’s ear.  During an event at the White House, a lady tells Leslie that the DNC is interested in running her for the Governor of Indiana.  At the same event, Jen tells Ben that she wants Ben to run for the same damn office.  CONFLICT.  At home, Ben and Leslie make a pros and cons list about each of them running for Governor – only its the same list for both of them.  Leslie wants to ask the gang about their opinion on it and lamenting the fact that they are scattered everywhere, when Ben surprises her with a reunion.  What a sweet hat!  They are busy socializing and don’t have the time to ask people for their opinion so Leslie suggests just tossing a coin.  When they go to announce that they will be tossing the coin, Ben instead announces that Leslie will be running for the Governor of Indiana because she is the perfect candidate and also because she wrote that she wanted to be Governor in her kindergarten dream journal.  Ben is going to run her campaign – with his tight compact little body like an Italian sports car.  She later gives the commencement address at Indiana University and we learn that she served two terms as the Governor and IU renames their library after her.  She also leaves the students with wise words: Work hard for work worth doing.

Now this show that I loved has ended.  I am really happy that they ended the series with such a great episode.  I’ll miss you Leslie Knope.

To drown out your sobs, please watch this song sung by the cast on the Seth Myers Show: https://www.youtube.com/watch?v=0ZQQfkJ7hZY.

Much tears.  Such sad. 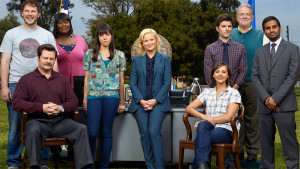