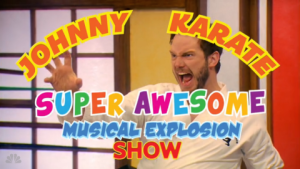 A WHOLE episode dedicated to the Johnny Karate show – complete with fake ads for Very Good Building and Construction, Wamapoke Casino (slowly taking back our money from white people one quarter at a time), Paunch Burger, and Verixxotle (partnership between Verizon, Exxon, and Chipotle).  So. Much. Fun.  I wish this was a real show because I would totes watch it, even though its supposed to be a kids show.  I mean, I still watch Arthur so I would definitely watch Johnny Karate for all its craziness.

It’s the last episode of the Johnny Karate show because Andy is moving to Washington D.C., where April is starting a new job.  Andy teaches the kids a little about DC – there’s a white house, a mental institution (Smithsonian), the Lincoln Memorial that is a giant monster that represents all of America’s enemies.  But what’s a show without a mystery – who stole Johnny’s guitar? Dun dun dunnnn (the peace in Iraq will be cancelled if the guitar isn’t found)!  Burt Tyrannosaurus Macklin in on the case.  Chief Donna gives him a clue because Burt is the best of the best (duh – that’s why Batman works for him).   April does one more April’s Animal Corner with a Goliath Bird Eating Tarantula, which is missing because Andy was playing hide and seek with it.  WHERE DID IT GO? 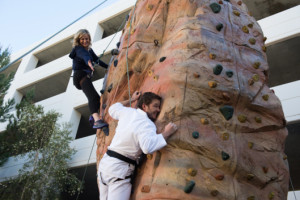 The show has 5 regular segments: Build something with Carpenter Ron, Learn something with Professor SmartBrain, Karate chop something, Try something new with Leslie Knope, and Be nice to someone.  Carpenter Ron denies Andy a “hug moment”.  There’s a boring buzzer for whenever Professor SmartBrain talks about something boring, which is every time.  Garry, the mailman, gets karate chopped (remember not to karate chop the real mailmen and women) right in the middle of a sweet speech about Andy.  Leslie takes over the show for “Andy Dwyer: This is your life” – its a recap of Andy’s journey to becoming our Andy, and in a way, Parks & Rec’s journey to becoming our Parks & Rec.  (Its ending soon.  I can’t.)  The rich Lord something something Andy befriended in London is at the show to knight Andy.  Ben inquires about whether Lord something something is authorized to knight people (he’s so rich, the Queen lets him do it) and Andy is totally cool with Ben being knighted too.  How hilarious and nerdy is Ben – muttering “winter is coming” whilst being knighted.  Andy also gets a genuine Pawne Police Department badge (but he’s not a police officer) and he gets Ben to look at the clue, which contains the initials JC (Jimmy Carter?).  Turns out John Cena has Johnny’s guitar, so Burt apprehends John and put him in the Funky Monkey Dunk Tank!!

Through this all, we can see that April is having a really hard time.  She clearly feels like she’s taking Andy away from something he loves and is good at.  Tough situation to be in for any one.  So when Andy starts thanking everyone for their love and support, and asks April to come to the stage for the “be nice to someone” piece, April bolts.  Andy chases her down and tell her that he wants to move to DC and find their next adventure because he loves her and she’s his Verizon Exxon Chipotle.  Awwwww!

Now, where do I find the Mouserat documentary? 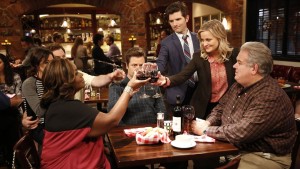 I didn’t particularly like this episode.  It felt very scattered and disjointed – but maybe I’m just sad because this episode is paving the way to the end.  Donna is moving to Seattle.  Leslie and Ben are splitting their time between DC and Pawnee.  April and Andy are moving to DC.  Garry is finally retiring.  Everything is changing.  Then they find out that the beloved mayor of Pawnee, Mayor Walter Gunderson, has died.  GUYS…IT’S BILL MURRAY!

At the funeral, Leslie is looking for something to cheer them up and she talks Tom into proposing to Lucy – all based on the eulogy given by Mayor Gunderson’s assistant and lover (you gotta tell the person you love how you feel; otherwise it will be 45 years later and he/she will be dead).  Tom wants the proposal to be a multiplatform media experience, you know, the Tom Haverford way.  They shoot an elaborate jewelry heist scene, where Jean Ralphio is the villain and Tom is the hero.  Its action packed with smoke machines, fights, and stunt doubles.   But when they are all done and at the airport to pick up Lucy, Tom changes his mind.  He tells Leslie to go get 3 things – pancakes, a daisy, and a pack of cards – and meet him at the Snakehole Lounge.  The 3 things he asks for are reminders of the night he and Lucy met.  He asks Lucy to draw a card for a magic trick, just like he did on the night they met; except this time the card says “Will you marry me?” and Lucy says yes.  Although this whole Lucy-Tom thing has been sweet and all, it does feel a tad bit forced.  Couldn’t we have left them at they-are-happily-dating?  Is marriage necessary to tie up loose ends for the series finale?  I guess we will see. 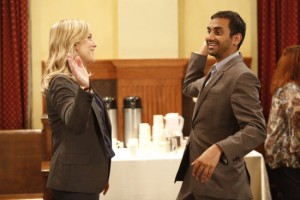 While Leslie and Tom set out on their quest, Ron gets some bad news – his barber has died.  He is pretty emotional about the passing of his barber (as emotional as Ron can be) because he’s been going to Salvatore for years – paying his $8 and getting the same haircut with little conversation.  Everything is changing and Ron doesn’t like it.  Donna tries to cheer him up by taking him to Typhoon – who reluctantly agrees to cut Ron’s hair in the usual fashion and only charge him $8.  You can tell that Ron expects not to like this new barber very much but once Typhoon starts talking about Eurotrash and how much he takes Europe, Ron starts to giggle and its the best. 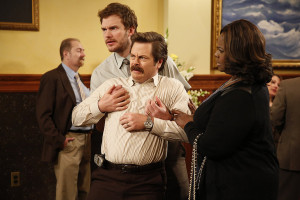 Ben recruits April and Garry to help him find an interim mayor.  April keeps suggesting Ben that it should be him but he doesn’t bite, partly because of his last disastrous stint as mayor.  They interview several people including  Bobby Newport (declines because he’s going to space and invites Ben along for a cool $600,000 deposit), Joan (who isn’t eligible because she’s “27”), Doctor Saperstein (who can’t because of his crazy kids), Mona Lisa Saperstein (who is crazy – MONEY PLEASE), and the Douche (who is going to change the name of the office from Mayoral Office to the Oral Office – gross).  April is still trying to convince Ben to take the position and it seems as though she has him convinced but he backs out and chooses the new mayor – GARRY!

The proposal planned for Tom and Lucy is now the inauguration ceremony for Garry – complete with a choir singing “All my life”, red carpet, a litter, fireworks (during the day?), and a hot air balloon.  The happiness Garry was feeling…just melts my cold cold heart.  Of course, he doesn’t get to give his speech because he is cut off by the hot air balloon noise.  Classic Garry.

Its almost over you guys.  Ughhhhhh.

Here’s a piece of advise from Leslie to ponder over till next week: If you didn’t want to be on call 24/7 for emergencies, then you should not have gone into the high-stakes world of banner-making.