Welcome to the Parks and Recreation weekly recap!  As this is the last reason of Parks and Rec, I hope these recaps will act as virtual hugs as we turn into puddles of tears upon the exit of Leslie Knope and friends.

If you haven’t watched the newest episodes of Parks and Rec, I would advice you not to read on unless you would rather read about it than watch it, which would mean you are some kind of monster. 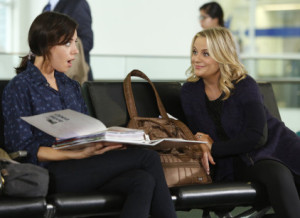 FIELD TRIP TIME!  Leslie and April are going on a trip to DC on official National Park Services business.  Leslie doesn’t know that April wants to quit her job and April doesn’t want to tell Leslie, even with Ben pressing her to do so.  I don’t blame her.  Remember how Leslie freaked out about Anne moving away?  Yeaaaaaah, that’s why April doesn’t want to tell Leslie.  April tries to show Ben why she is keeping this from Leslie by suggesting a change to the itinerary and Leslie promptly freaks out.  Yup.  Ben gets it.  April and Leslie are at the airport where they have time for some chitchat, which turns into Leslie talking about April’s future, which leads to Leslie giving April a binder of a 5 year plan for April.  A 5 year guide through April’s future in the federal government.  A future April doesn’t want.  Oh boy.  I, on the other hand, would be super down for Leslie making a 5 year plan for me.  And I would love to rock the “Gov Buds for Life” shirt.

In DC, they meet/run into/stalk a number of politicians.  Senator Boxer (D-CA), Senator Gillibrand (D-NY), Senator McCain (R-AZ), Senator Booker (D-NJ), and Senator Hatch (R-UT).  I would totally go watch them perform with their Polynesian fold band – Across the Aisle.  Leslie gets news that she is getting put up for the Deputy Director of Operations, which means she would have to move to DC and she is so up for it.  She says HELLZYEAH to the confirmation hearing and F YEAH to the training.  When she tells April about moving to DC, how April would move to DC, and they would have a bench in DC together, April can’t take it any longer and tells Leslie that she quits.  Heartbroken, Leslie does what every one would do – talk it out over waffles with Madeleine FREAKING Albright.  Maddy (we tight) tells Leslie that she is so focused on helping her friends sometimes that she doesn’t consider their feelings.  I think Madeleine should get an advice show where people write in and she gives them advice.  I would watch.  Errday. 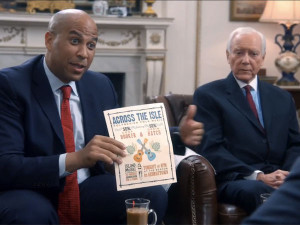 Leslie talks to April about her decision to quit and then comes a heartwarming dialogue from April (what the what).  April tells Leslie basically that the fact that she wants to quit and figure out what to do, is a testament to how Leslie has influenced April.  Oh and April thanks her and tells her that she loves her.  WHO EVEN IS SHE?  Then she tells Leslie that she is a witch who hates everything.  April is back.  Leslie takes April to see Alyssa at the American Service Foundation – they take young people who don’t know what to do and find them jobs to help communities across the country and around the world.  (I’m not even going to lie – I totally googled to see if this was a real organization because I want to use their services.  Sadly, it doesn’t exist.  But this season is in the year 2017, so maybe in 2 years, it’ll be a thing?  Can I still be considered a “young person” then?)  April wants to do what Alyssa does – tell people what to do and send them very far away – but wants Leslie’s okay with it.  Leslie is ECSTATIC that April wants her opinion, which she will give her along with doing mock interview, picking out her interview outfit, etc.  Also, I have been loving April’s outfits the past couple of seasons. 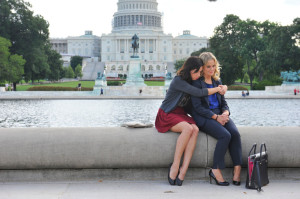 Back in Pawnee, Andy recruits Ben and Ron for a quest to find THE job for April.  Their first stop is Ron’s new company, aptly named “Very Good Building & Development” (because, as Ron said, “creativity is for people with glasses who like to lie).  Whilst touring the building (this is a door, this is a wall – Ron is the best tour guide), they meet Don Swanson.  I love that no one knows Ron has brother(s) and Ron’s brother doesn’t know he worked in Parks and Recreation.  Classic Ron.  Anyway, first Ben and Andy think April could work for Ron but the job meets none of April’s criteria, so they move on to the accounting firm.  I LOVE LOVE LOVE how much the accounting firm guys LOVE Ben and his accounting puns.  Ben, Ron, and Andy try really hard (Andy goes the extra mile with fireworks) but can’t land April a job as a consultant.  But seeing how much her friends are trying to get her this job, the accounting firm dude finally starts to relent, Ben gets a call from April saying she doesn’t want the consulting job.  “Well, this is awkward,” said Ron Swanson.  Also, I agree – no one should be compared to Mary J Blige lightly.

It is time to get Ben’s campaign started so let’s talk shop – which is one of Leslie’s favorite types of talks, along with pillow, girl, real, and TED.  Jen, wearing a poncho to repel the kid yuckies, tell Ben and Leslie that Leslie is the campaign’s biggest liability because she is smart.  Not-so-smart wives, the public is okay with.  The smart ones are the ones that freak them out.  Ben and Leslie decide to sit out the sexist Pie-Mary, an event where the wives of the candidates compete with each other for the best pie award – “the contest loser was all women”.  This starts a shit storm.  During an event for Ben’s campaign, the media starts asking Leslie questions regarding her decision not to participate – with questions such as “why are you against homemakers – who is watching the kids – do you cook for your children – what other traditions are you against”.  So Leslie decides to participate in the Pie-Mary, which leads the Indiana Organization of Women to threaten to protest her and Ben (Leslie thinks the lady from IOW is there to give her the IOW Woman of the Year award – which she is not).  (I want her to really publish her cookbook – The Feminine Mesquite).  On “No, You’re Wrong with Mike Patterson”, the incumbent candidates wife says that Leslie tried to have it all while she chose to put her family first. 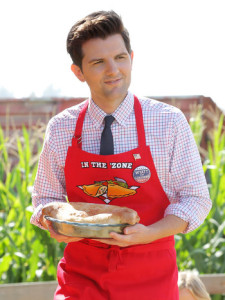 Finding themselves between a rock and a hard place, Ben comes up with a third option: he will enter the Pie-Mary and make a dessert calzone (not a pie).  I love how much he loves calzones.  They think their third option will win people over but it brings out another faction mad at Leslie – The Male Men, a Men’s Rights Activists.  Oh Lawd.  Leslie, Ben, and Jen watch feminists, Men’s Rights Activists, Women against Feminism, the Langmans (oh the Langmans), and Brandi Maxxxx, Leslie look-alike adult film actress, argue for and against Ben and Leslie.  (Fav line: can we have one conversation about feminism where men get to be in charge?).  Finally, at the big campaign event, Ben is going to defend Leslie but relinquishes the spotlight to her saying that he “couldn’t care less about the political consequences”.  Then comes the awesomeness of Leslie Knope in full force.  There’s no doing it justice by summarizing it.  It is just great and I love Leslie Knope and this show because of it.  Parks & Rec has been about issues before but this speech by Leslie, just saying your questions are stupid and stop with your bullshit (with the added quip from Ben that no one ever asks him those questions) – I just loved it.  (Can politicians do this in real life? KTHANXBYE.)  They get half boos and half cheers, which is standard, and Ben later wins the IOW Woman of the Year award – son of a bitch. 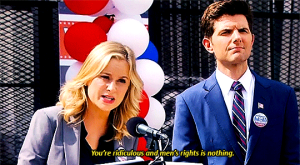 Side adventures in the episode featured Garry and Donna, and April, Ron, and Andy.  Donna sees Garry sitting by a drain, where he has dropped his wedding ring, then keys, and then his backup wedding ring.  He tells Donna how his wife will be “mean” to him (using the B-word – bozo).  Donna is so sweet to him.  She brings him the things he lost out from the drain plus a bag of fresh oranges and calls him the b-word -buddy.  Donna usually makes fun of Garry or blows him off, so to see their friendship side of things.  So.  Many.  Feels.

April tells Ron that she is moving to DC for the new job with the American Service Foundation, to which Ron replies with “bully for you”.  I will now use that phrase every day.  Thank you Ron.  Ron asks for the key to his house back, which April put in a box and hid under Andy’s desk.  When they open it, instead of the key, they find movie stubs to Twilight: New Moon, four human teeth, and notes about how much she digs Andy – which Ron and Andy find hilarious.  This sends them on a scavenger hunt – one that Ron is not able to solve.  In telling April that he trusts and admires her, he further makes fun of her while reading the last note they find about Andy that contains the words “woof-woof”.  April remembers where she buried the key (the same place Ron may or may not have buried a lot of gold) because woof-woof = bark bark = a tree that reminds her of Ron.

That is it for now.  To all the ladies out there, Happy Galentine’s Day! 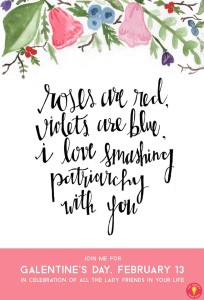