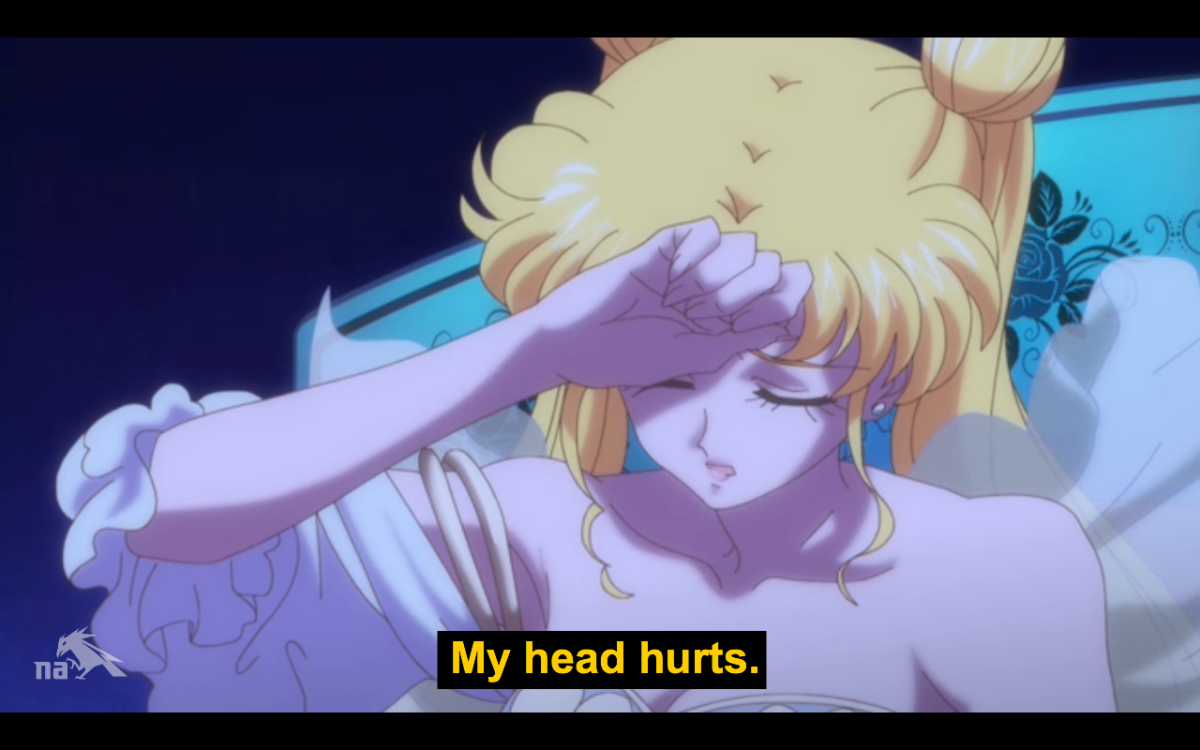 Just about the only thing Sailor Moon Crystal has going for it at this point is its ability to create striking images. I’m not talking about character creation; the characters are still flat. I just mean that there is some good staging going on, creating drama and power, despite the otherwise lackluster visuals. In the beginning of episode 21, we see Prince Demande take the supine and unconscious Sailor Moon away, leaving her battered and cracked scepter behind. It falls to the earth and lies there, inert.

Of course, then we get Tuxedo Mask giving his ten thousandth impotent cry of “Usako!” even though he’s just standing there, not rushing toward the spot where she was or frantically searching the horizon. Do the animators know how drama works? Because it’s more than just a wide-eyed expression. 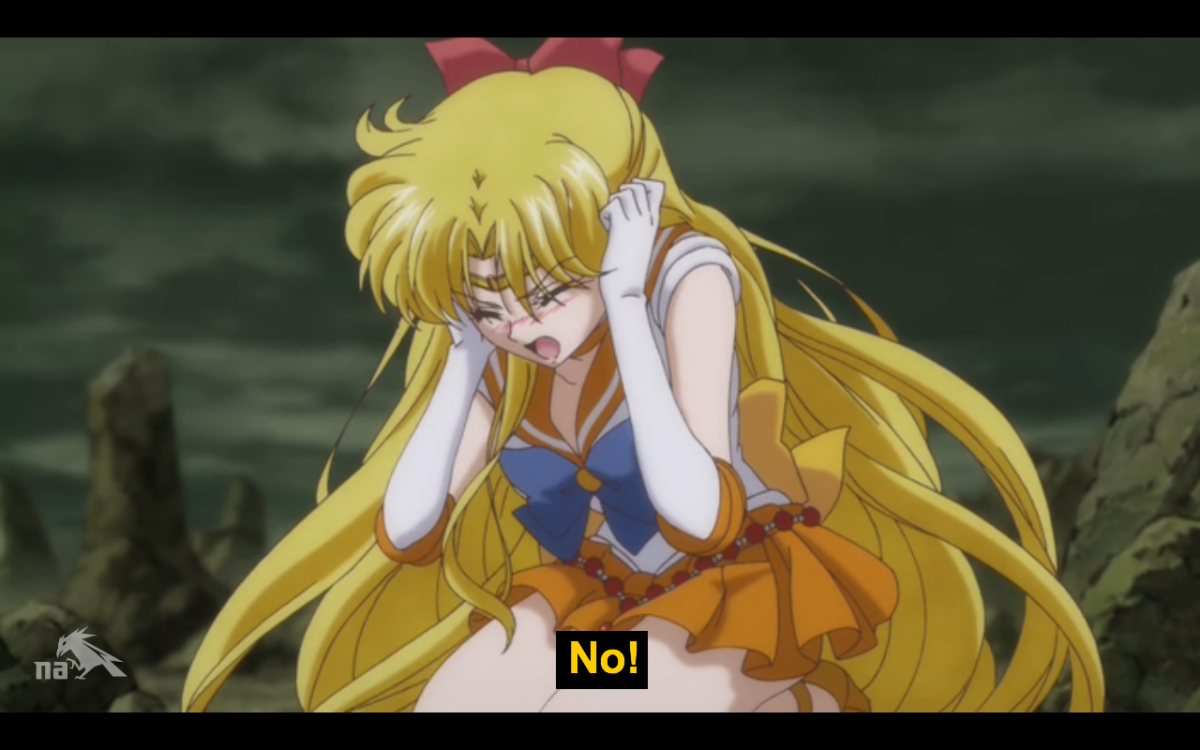 Sailor Venus falls to her knees and howls “no!” a moment later, proving that the animators are the kinds of people who have only seen the Star Wars prequels. That kind of despair should be reserved for moments of absolute, crushing, and irreversible defeat; not moments when heroes and heroines should be galvanized into even-more-frantic action on behalf of their comrade. They’re not out of options. Go back to the palace, try to find her on the computer or, with King Endymion’s help, try to find the other Senshi–something. Don’t just crumble.

Elsewhere, being very much alive, Usagi wakes to find herself in a new outfit. Creepy. She’s momentarily concerned about her brooch being gone, but then she finds it right next to her. Now, she doesn’t open it to confirm that the Silver Crystal is still inside, but let’s at least give her credit for some minuscule instinct of self-preservation. She gets up, nursing a headache and not really remembering how she got into her new clothes. This is yet another instance of the writers being utterly and moronically oblivious to the realities of the situation. This whole situation is profoundly unsettling because of the potential implications of date rape, but I don’t get the impression that the writers or animators are aware of it. Usagi gets up and stares at a hologram of her future self – not terribly upset, visibly confused, or eager to get away. She doesn’t seem like she’s in a fugue, either. Any woman would be immediately worried in a situation like this, but the show just trudges on, unwilling to deal with it. I can only shake my head some more.

Prince Demande appears before too long, upping the creep factor until he utters a line that made me burst out laughing: 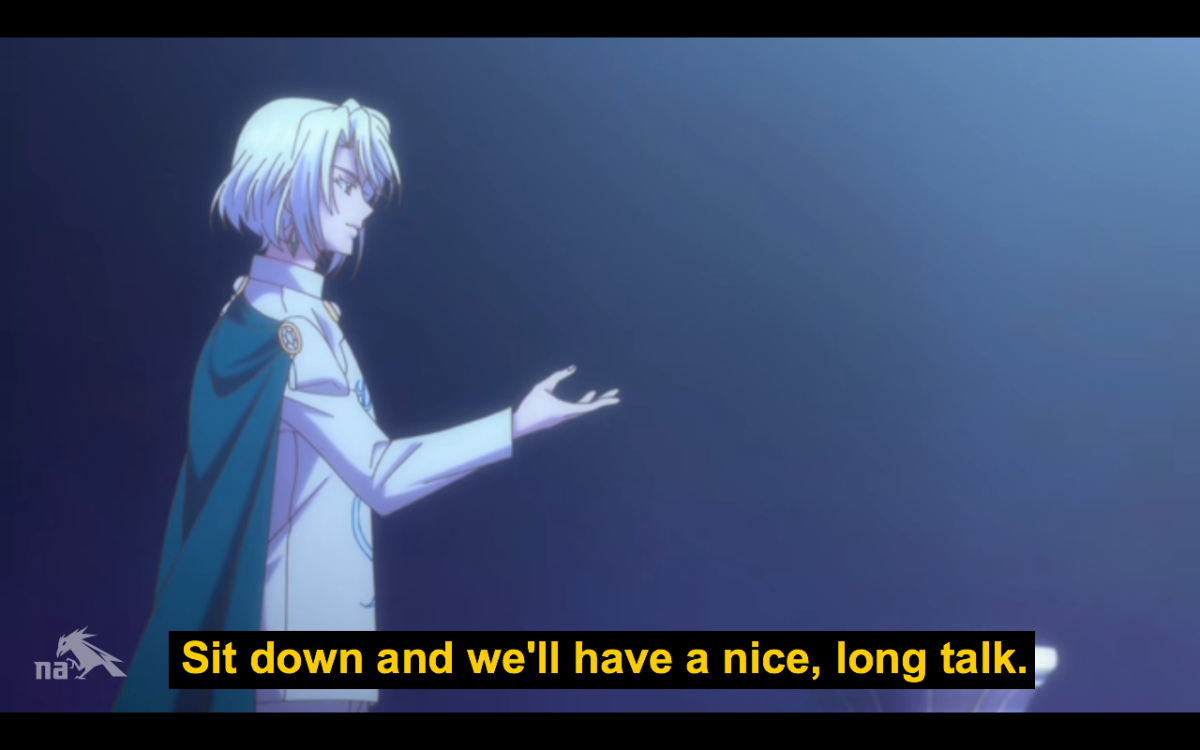 Yes, you’re very menacing when you want to sit down and talk. And when you clearly and succinctly state that intention. This is not drama. This is how you kill drama. Mind-controlling Usagi into sitting down is bad, but at this point, most of my dread springs from a fear of any more goddamn info-dumping.

Alas, Demande takes a big ol’ info-dump right on the plot, bringing it to a screeching halt. I did not know it was possible for a TV show, literally a medium for showing and not telling, to err so badly on the side of telling and telling and telling. Once again, we get a history of Crystal Tokyo with Prince Demande uttering another spit-take-worthy line: “we didn’t like it.” 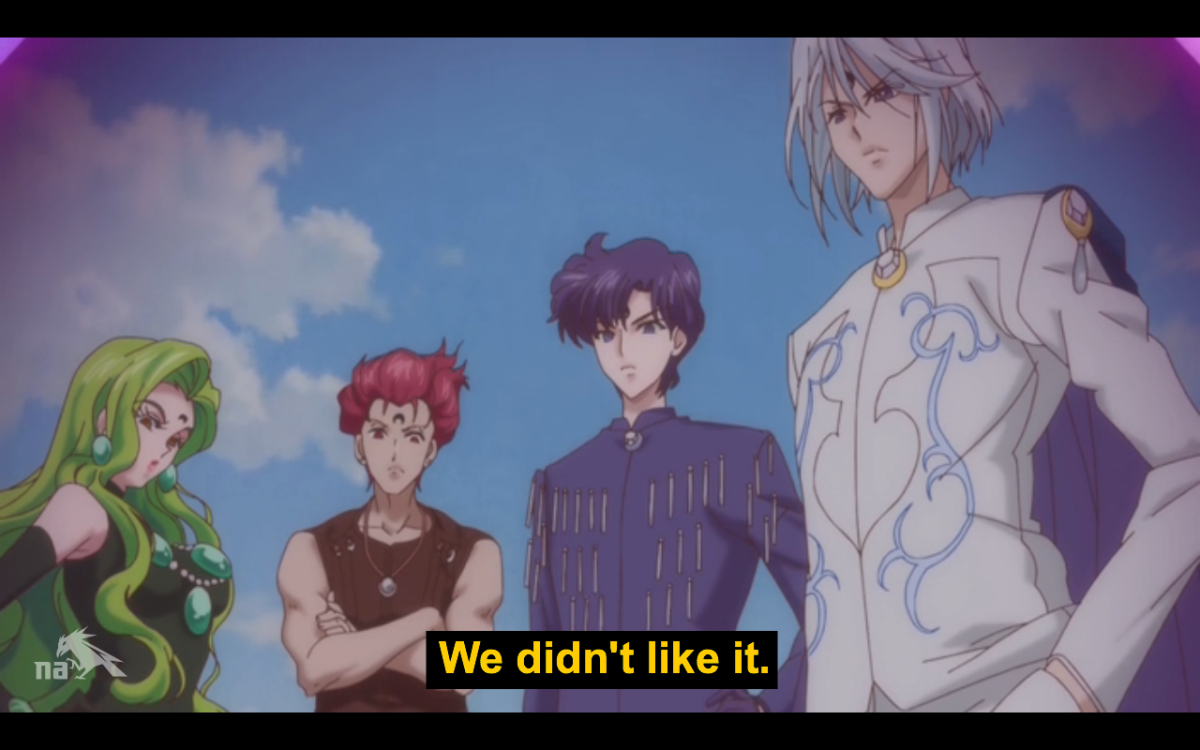 You. Didn’t. Like. It. You know what I don’t like? I don’t like raisins in cookies, or wet socks, or my cat waking me up by stepping on my face. I don’t commit mass murder and destroy an entire civilization because of it. Come on, Demande, at least say you despise it or you resent it. Better yet, don’t say anything at all about it. Show us how you hate it with your expression and your actions, because both so far have been dull as dirt.

Plus, you took the advice of a glowing phantom who appeared before you seemingly out of nowhere and told you to go to another planet. Yeah, you’re a real evil genius.

Oh my God, all of this is only 5 minutes into the episode. Thank God this comes out on Saturdays – I need to day drink. 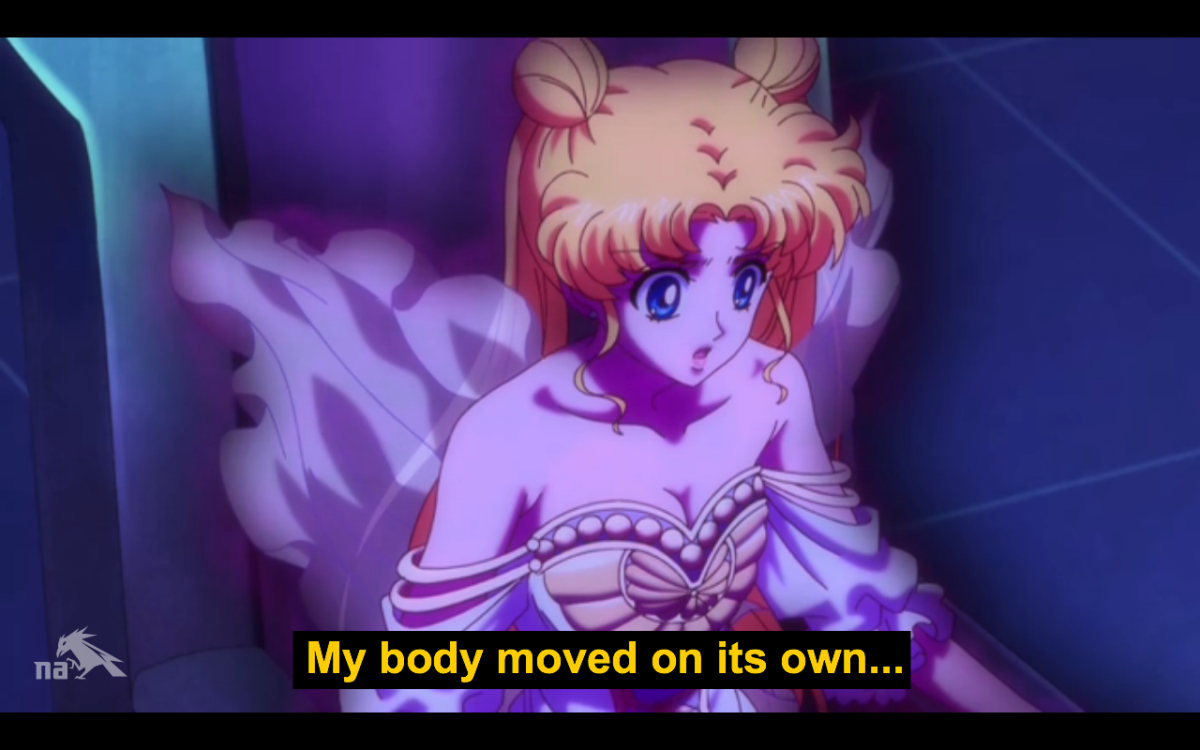 Talk talk talk and then, Demande forces a kiss on Usagi, who musters her power to push him away. But when she tries to transform, she still can’t. Demande chuckles at her and then leaves her alone, seeming to forget his desire to see her kneel, which he stated not ten seconds ago. This is a far cry from the original, in which Demande and Usagi do battle with their wills – Usagi trying to resist his compulsions and Demande trying to force her to kiss him and kneel to him. All the drama arises from what we know of the characters, not what we know of the long, boring history of the Black Moon Rebellion. Crystal is undercutting its storytelling potential by cutting away from scenes like this after the characters back down for no apparent reason, draining all the tension away.

We cut back to Tuxedo Mask and Venus, who have apparently recovered themselves enough to do something besides wail and gnash their teeth. Well, sort of. They state obvious facts and make active-sounding comments, but it’s actually Luna who advances the plot, reminding everyone that Chibi-Usa can probably wield the Silver Crystal, too.

Except, well, her dad explicitly states that she has no power. Oh, he believes she’ll come into it, but ugh. All I can think is that, in the original, the king and queen believed in much more than Chibi-Usa’s ability to wield magic. They believed in her. This treats her like she’s broken, not like she’s a child who needs to learn.

Blah blah blah history of the Death Phantom – more statements about how they’ll do anything to rescue their friends and yet remain standing around in a control room with zero plan, blah blah. Cut back to Usagi to maintain the illusion of forward motion. And that was another five minutes of my life I’ll never get back (ironically, from a show about time travel). 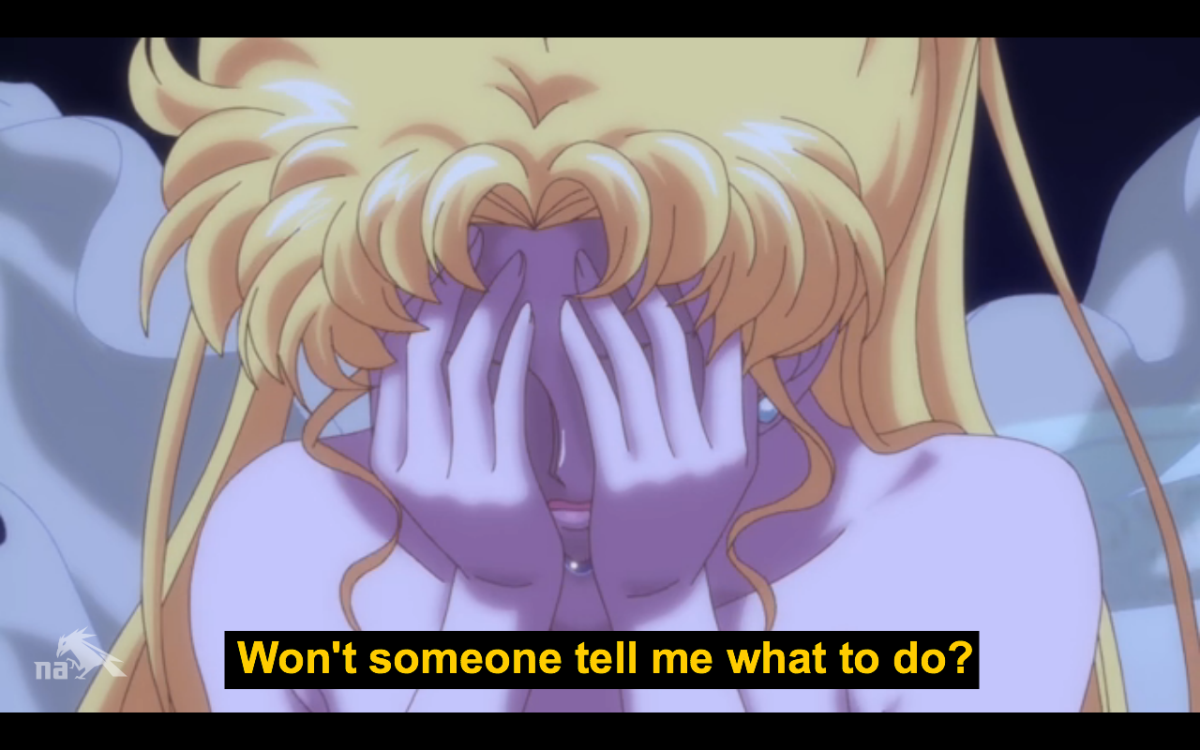 The next two minutes are astonishingly terrible for different reasons. Usagi is alone and frightened, and yet we get several very long shots focused entirely on her boobs. There’s also a moment in which she wishes someone would just tell her what to do. Now, on one hand, sure, we’ve all had moments when we wished someone would tell us how to fix things. On the other, that is an awful message and the show should be ashamed, because it doesn’t really contextualize that against her usually being a strong person. Instead, it gives a context in which she is weak, selfish, and immature. We’re left with the impression that, if someone had come in and told her, she would have done it; only because she was alone did she figure it out for herself. 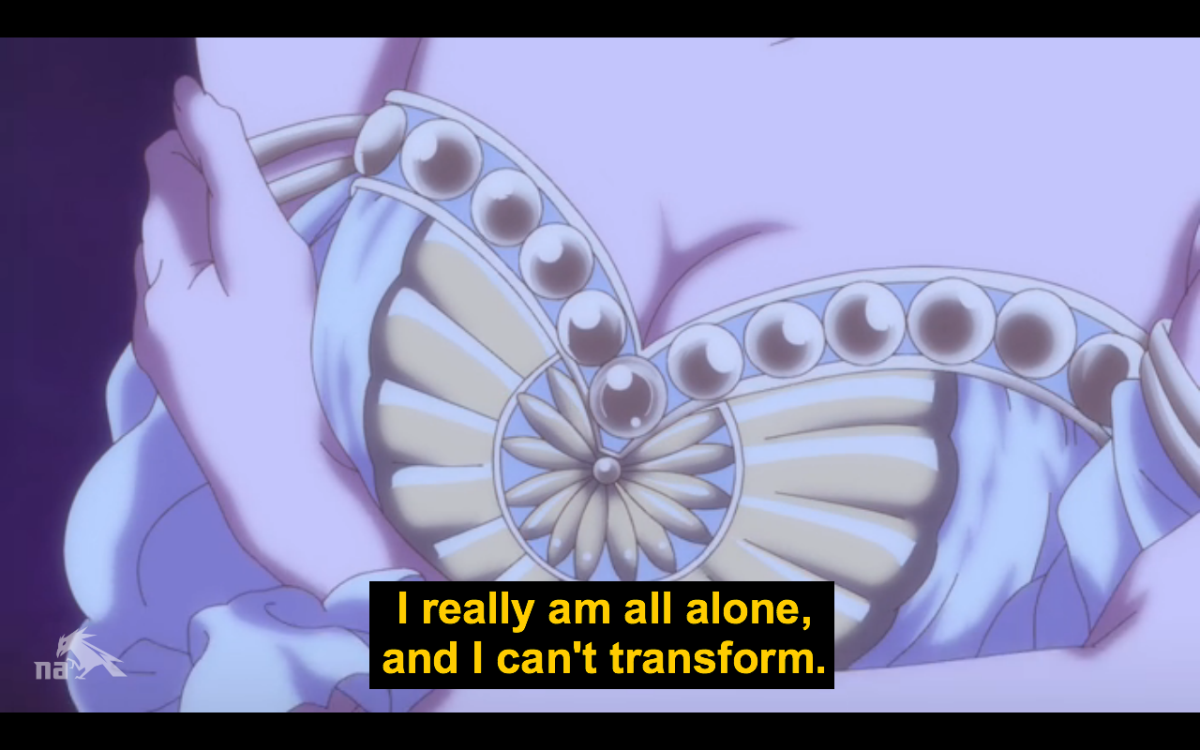 Alone? What about those two gals right there?

INTERMISSION: I’m going to refer to the commercial break as intermission because this feels like Gone with the Moon (Gone with the Wind had an intermission). I will be back with gin and cake.

Right, so on we trudge: the missing Senshi are awake and unattended. They try to transform, and then are drained of their power since Demande doesn’t need them anymore. Well, I’m glad that scene accomplished something.

Because everyone assumes she has no power, including a trio of bullies a few years older than her, Chibi-Usa has a complex. (She’s the daughter of the ultimate ruler of the world, and yet somehow, three older boys are allowed to corner her and tease her enough to make her cry? This makes no sense.) Therefore, she decides to take the Silver crystal. The image of her breaking the seal on the Silver Crystal with Puu is striking (hah! pun), but I don’t really like her motivation here. 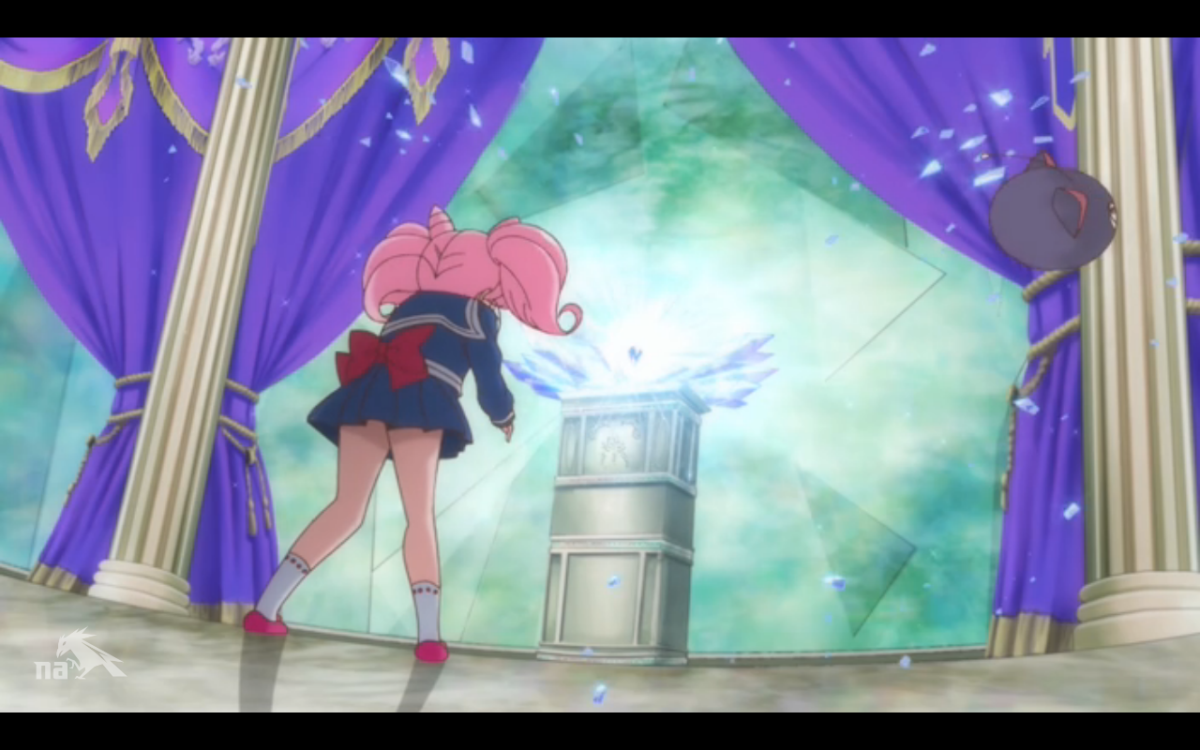 And then, the show directly contradicts a sequence of events it laid out before. In Demande’s narration, he found Chibi-Usa outside, and Neo-Queen Serenity came rushing out to protect her. In Chibi-Usa’s version, her mother goes running out, and she follows after. Even allowing that maybe Demande worked some powerful illusion to trick the queen, why would they confuse the events like that?  This is the worst.

Also it’s hard to tell what era we’re in as Chibi-Usa is remembering things, but we see her in both eras with Sailor Pluto. Again, I’m glad Sailor Pluto gets more to do. I wish it didn’t include “blushing at the king,” but I’ll take it.

Chibi-Usa observes these blushes and concludes that, because Pluto is friends with someone else, their friendship must be meaningless or not special or…it wasn’t terribly clear, honestly. Regardless, she runs off thinking that she’s powerless and has no friends, gets lost, loses the space-time key, and runs into Wiseman. Wiseman strings together a few sentences about her despair and friendlessness, and she takes his hand. Roll credits. 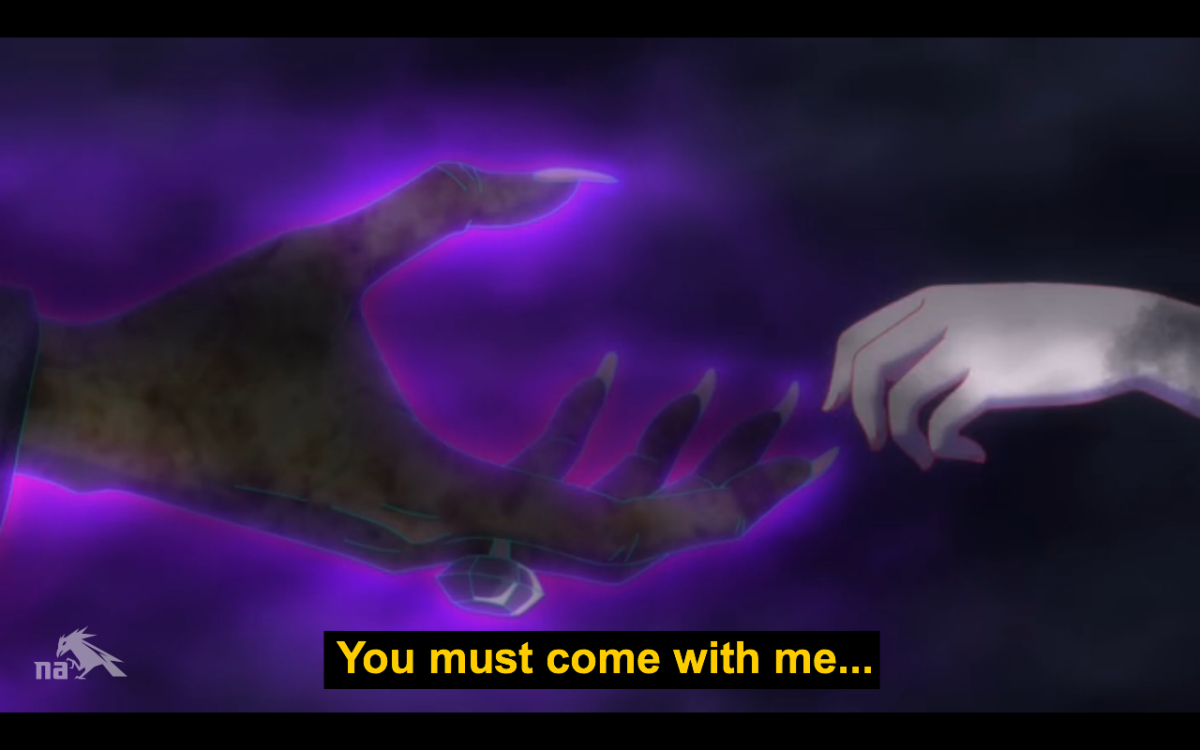 This last part crystallizes (hah!) something else for me about why Crystal is falling so short. Chibi-Usa could be a bona-fide brat in the original: willful, moody, and cranky. She was prone to running off at the worst times, and she grabbed what she wanted without thinking of the consequences. In short, she was a little kid. Here, she’s lost a lot of her childishness, but Crystal is contorting itself into very weird configurations in order to make her decisions make sense while, at the same time, trying to clean up her character. At least, it seems like they’re trying to clean up, maybe to make her more likable and less contentious, but it doesn’t work. All it does is make her motivations seem strange and her decisions stranger. Why would she take Wiseman’s hand? Why not run screaming or cry? Why worry about her friends when just a minute ago she was worrying about whether destroying the entire city was her fault?

There are no good answers. Not yet anyway, and the way things are going, I fear not ever.