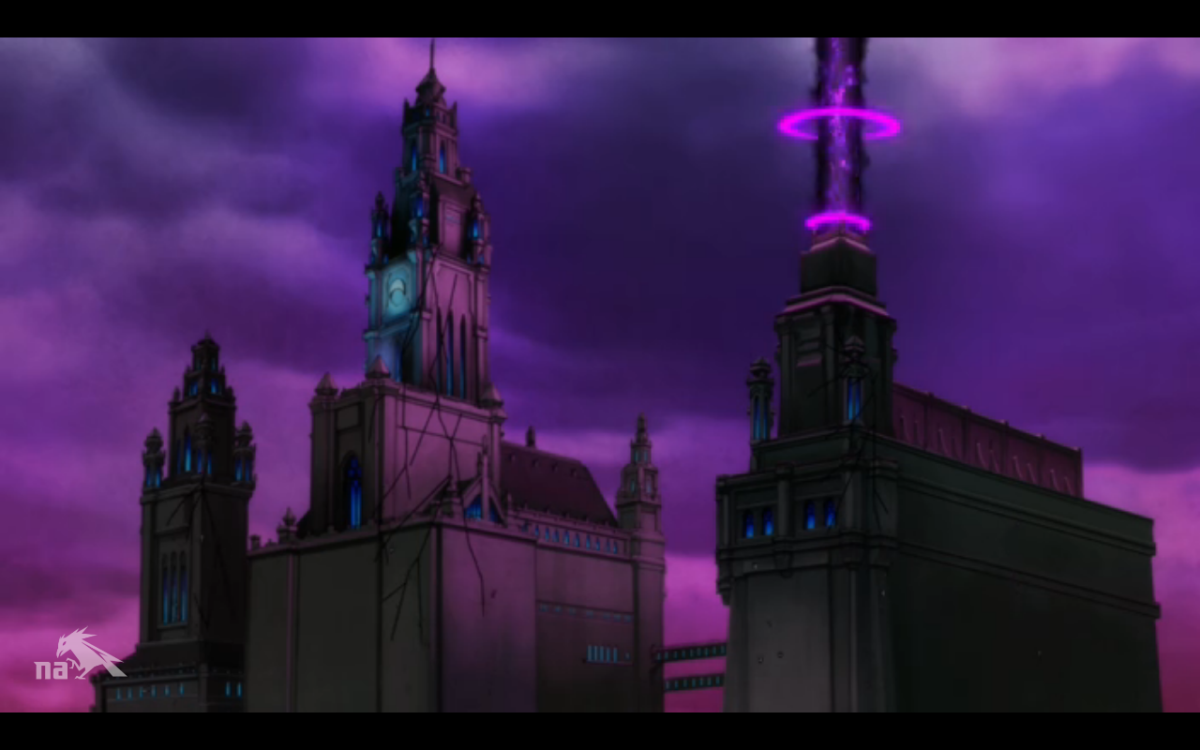 For those of you still with us, Sailor Moon and everyone she loves are in deadly peril. Time for drastic measures!

Or…well, time for running, anyway. Chibi-Usa is missing, and King Endymion enlists Tuxedo Mask to rush off with him, but they tell Venus to stay put. Which she does, although she pouts that she doesn’t like it. As in she honest-to-god sticks her bottom lip out and pouts. It’s King Endymion who learns that there’s a storm brewing in the aether of Space-Time, and that Chibi-Usa is lost in it. Tuxedo Mask just runs heedlessly into the storm after his future-daughter, despite Pluto calling after him that without a key, he’ll never be able to return. You know, it used to be that the girls did impulsively brave things to help one another. Now the girls stay behind, hamstrung by caution or overcome by the malice of their enemies and misfortune. 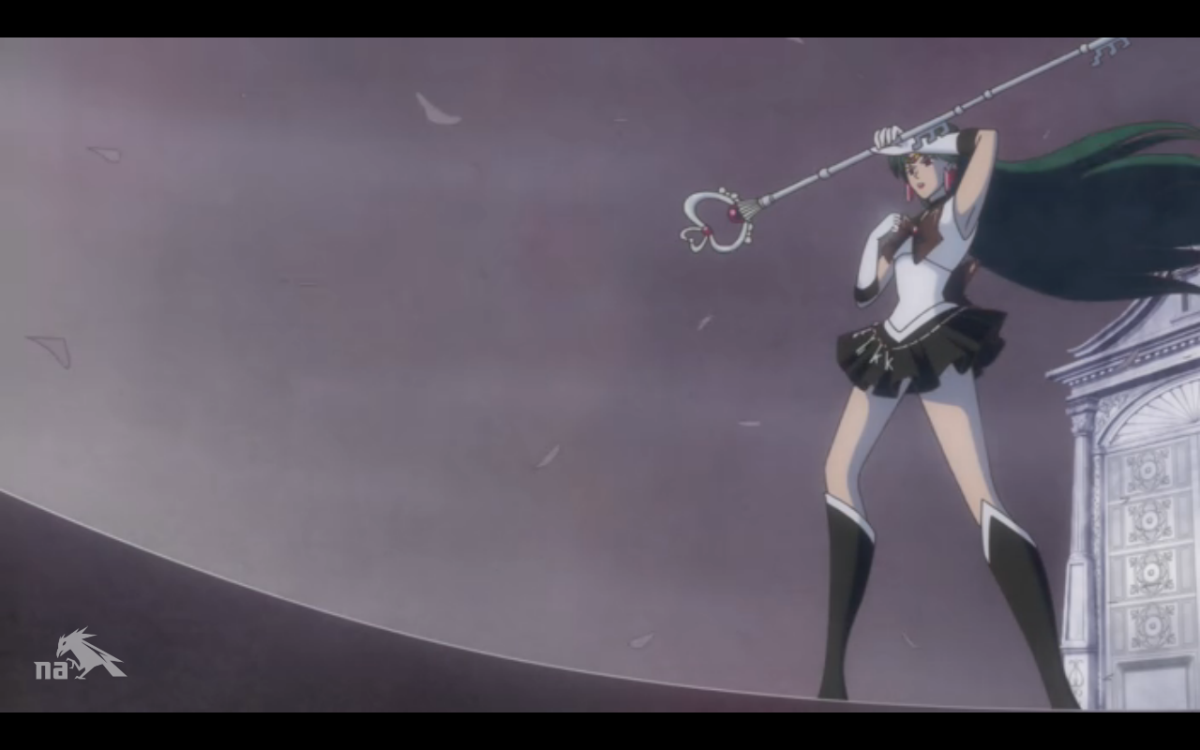 Which is where we find Usagi, weak and dizzy from the Black Crystal’s malevolent force but valiantly stumbling through the castle in search of her friends. She oh-so-conveniently hears Saphir and Rubeus discussing them because of course she does, but fortunately for my sanity, she also hears them debating the wisdom of their current plot and their suspicions about Demande and Wiseman.

While I did enjoy the arcs and fates of each member of the Dark Moon clan in the original, I admire how Crystal has kept them together here. There’s a lot of potential for new alliances, new arguments, and new narratives about these characters to emerge as they play off one another. I have zero faith that Crystal will actually put that potential into practice, but at least it’s nice to think about.

Usagi listens until she finally faints from all the evil energy, and Demande carries her off. But this time, when he tries to assault her, a bolt of lightning appears and protects her. An image of Tuxedo Mask flashes and is gone. Whether this comes from Tuxedo Mask himself or merely from her devotion to him is unclear, but where was that lightning the first time Demande tried something?

Usagi wakes and runs off once more in search of the other Senshi. Thank goodness she has a real goal. She swiftly comes across Saphir once more, and here’s where we get some more divergence from the original. Unlike the moving tale of his misplaced loyalty to his brother and their tragic ends, Crystal has him just talk. And talk. Giving absolutely zero insight into his feelings or the circumstances that led him to his conclusions, he informs Usagi that he regrets everything. Not a single trace of inner turmoil or grief appear in his appearance or voice acting. Another flashback reiterates the Black Moon story, but again tells us very little that we don’t already know. 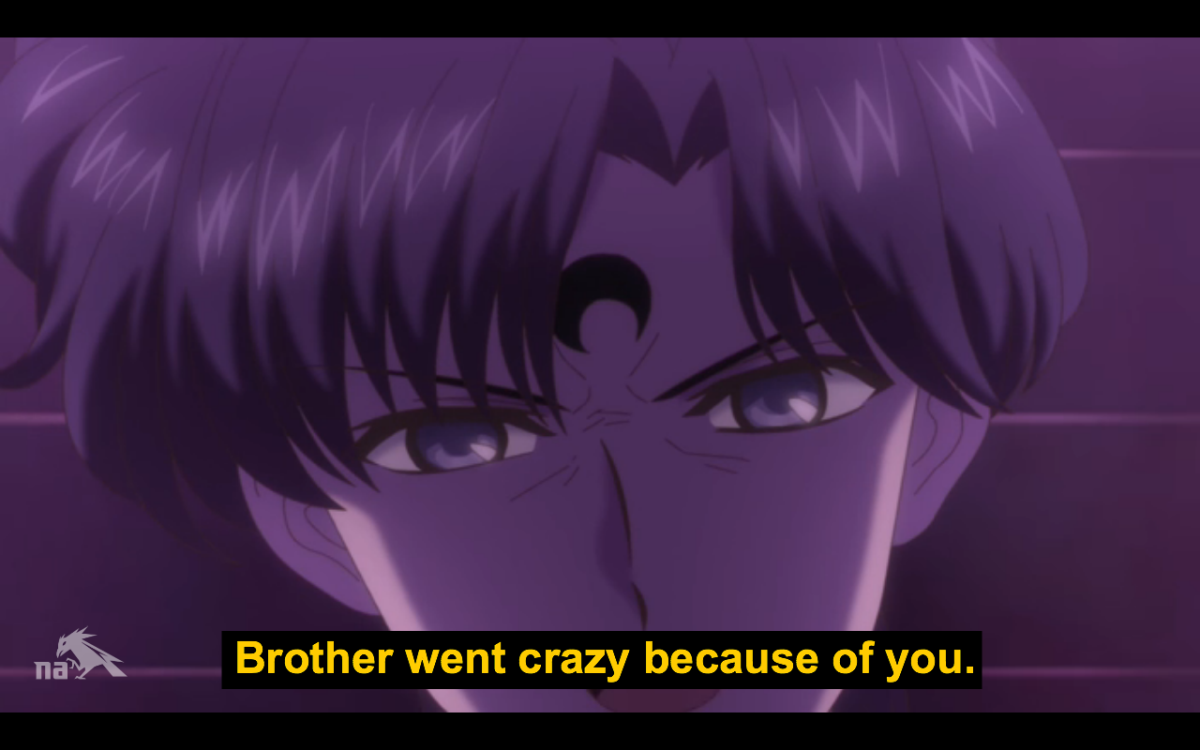 He then declares that it’s all Usagi’s fault that his brother is insane, despite having literally just said that his brother always did things like this and having just talked with Rubeus about how the planet itself might be influencing them. This entire exchange–sorry, this entire monologue, what Usagi says barely counts–makes very little sense emotionally. If they were trying to fake us out with the idea that Saphir was on her side, maybe they should have not revealed his lie in the exact same monologue.

When he accuses Usagi of being the reason for all these miserable things, she starts to cry. Because if there’s anything better for a young, predominantly female audience than blaming the victim, it’s having the victim believe it.

Back to Usagi, crying: her tears activate the Silver Crystal, protecting her from Saphir, and sending up a beacon powerful enough that Wiseman and his new apprentice take notice. It’s also enough to allow Usagi to once again transform. She says a few blandly defiant things to Saphir, but I’m still not clear on why the Silver Crystal activated. Was it just because she cried? Are the writers that stupid? Usagi always cries. She’s a self-professed cry-baby. But in the original, it was only her tears of love, compassion, and growth that spurred her power and transformation. Here, it seems that crying because she believes it’s all her fault is enough. 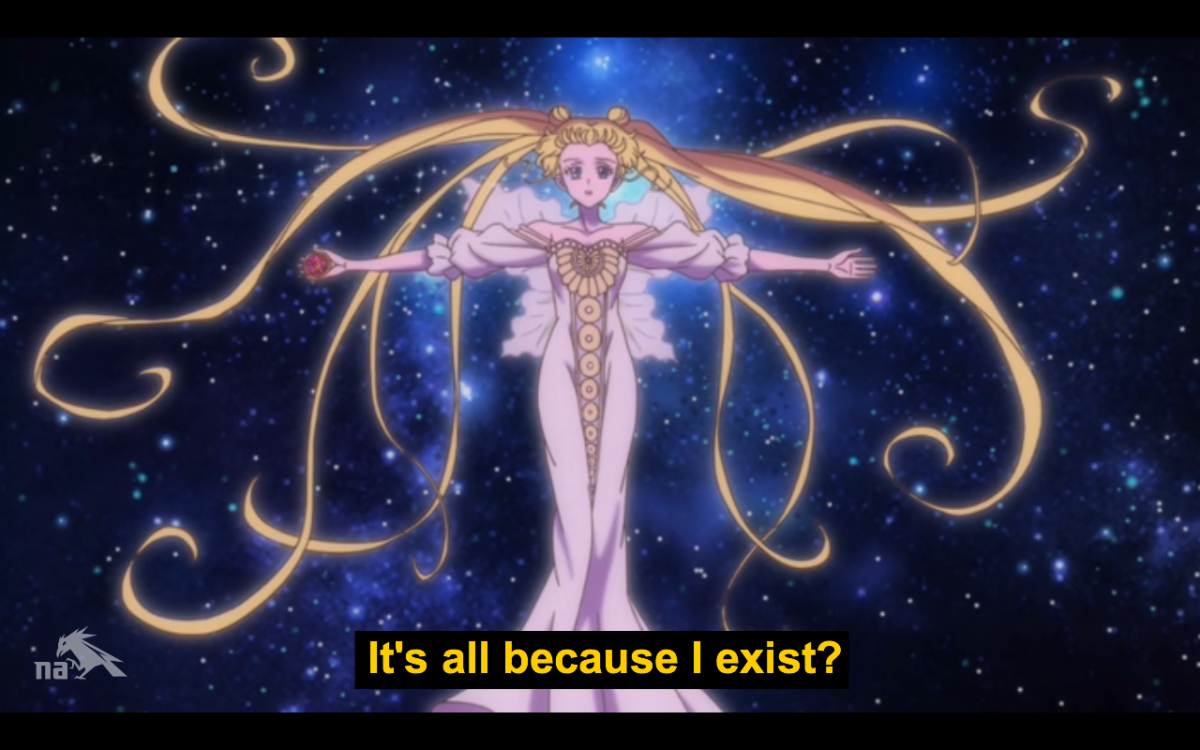 And that’s terrible. Because either she needs the crystal–an inanimate object that’s supposed to respond to her, not vice versa–to save her, or she’s being rewarded for accepting the blame for something she didn’t do. I suppose if you tried really hard, you could argue that she realized that Saphir was wrong, but then why cry? The whole symbolic matrix of this show is hopelessly messed up.

At least she manages to do the right thing and immediately locate and rescue her friends. Their devotion and mutual empowerment did stir my bitter heart, and seeing them together once more went a long way. Not far enough to forgive the way that the camerawork and animation utterly drained the dramatic potential when showing the villains, but at least it was something.

Usagi, endowed with the spirit of her future self as Neo-Queen Serenity, defies the Black Moon and rebukes their lies, reasserting her right to defend peace and justice. it’s a beautiful piece of animation in an otherwise tepid episode, and is complimented perfectly by Demande’s rebuttal while overshadowed quite literally by the Death Phantom. While we see Usagi and Neo-Queen Serenity side by side, we see Wiseman very much above Demande, creating a contrast between a union of equals and a union of master and servant.  There is a nice sense of the stakes–finally!–by concurrently showing present and future, good and evil, and allies and enemies, all in the same space. 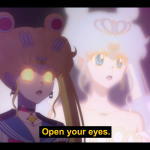 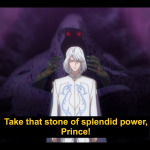 Reinvigorated for the fight, the Senshi attack all at once, and even though Wiseman defends against their combined force, Rubeus is scared. He’s done with whatever Wiseman and the Black Crystal and Nemesis want from him, and he hightails it toward the exit. Yes, the unreliability of evil characters is well-established; the interesting part is who stops him. Chibi-Usa, having turned into Black Lady (a truly cringeworthy name), stops him–and ends him. I’m quite surprised that Crystal allowed Chibi-Usa/Black Lady to actually destroy Rubeus. She killed someone! She’s six! What the hell! 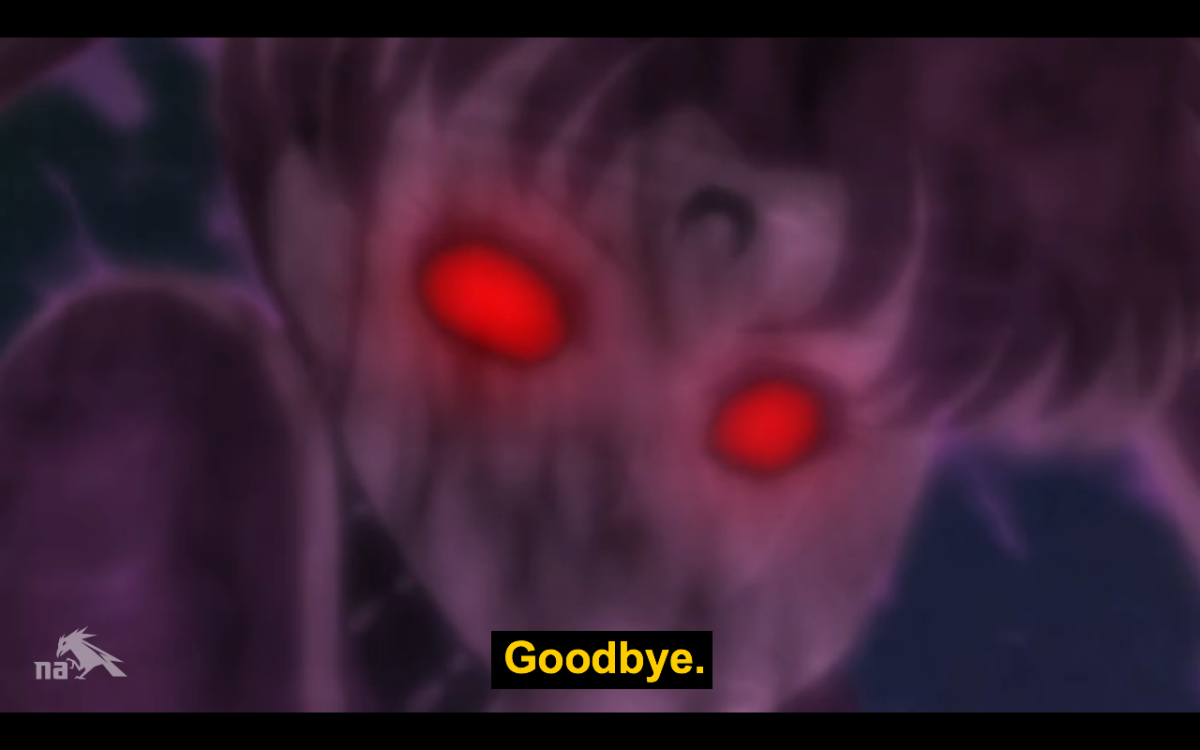 That’s the Senshi’s cue to GTFO–well, that and the fact that the Black and Silver crystals in such close proximity is causing the world to shake apart. Neo-Queen Serenity lends a ghostly hand once more and contacts Pluto, who helps them to break through space and time and return home. 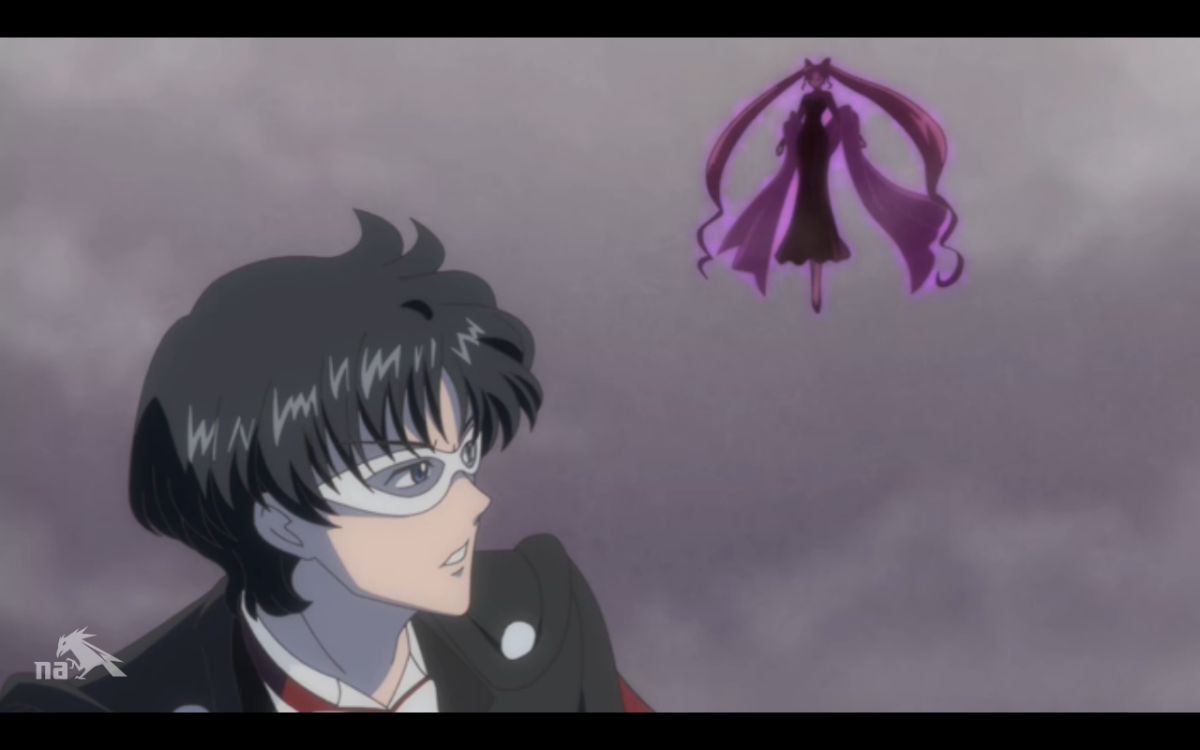 Elsewhere, Black Lady has taken Tuxedo Mask into the unknown depths of the Space-Time storm, which sounds far more impressive than it is. I understand that animation budgets are limited, but so far the Space-Time storm is…windy…and grey…ish. Maybe the threat is that it will feel so much like a crappy November day that the Senshi will all want to stay inside and won’t avert the apocalypse? Seems legit.

Overall the episode was fairly weak, but not overwhelmingly offensive, and the last five minutes were really excellent. If only this was where we were starting from, instead of where we were ending up.