Each fortnight, the pit of cold, nauseating dread in my stomach sinks just a little bit lower when I realize that it’ll soon be time to do another review, and I have to once again contemplate how much this show will ruin a couple of hours, and in what way. I only get so many hours, Toei, and I could fill them with re-re-watches of the original! Or I could stare at my cats! Or the wall!

So that’s about where we’re at, for those of you just tuning in.

Chibi-Usa is now the Queen of Nemesis and darling of the Death Phantom, and to show she’s serious, she backhands Luna-P into a rock. This is some nice shorthand to demonstrate that she’s now an official Bad Guy. To paraphrase Stephen King, it’s always the bad guys who hurt kids or kick dogs. (I guess this is the 30th century apocalyptic equivalent of that: only bad guys hurt quasi-sentient floating robo-pet/guardians.)

Prince Demande and Saphir are there too, and they quickly take out the Senshi with their newly augmented powers. In fact, none of the Senshi even get a single attack off before they’re trapped, though they do manage to throw themselves in front of Sailor Moon. Things are looking dire for Sailor Moon without her friends—but wait! Pause for more exposition! 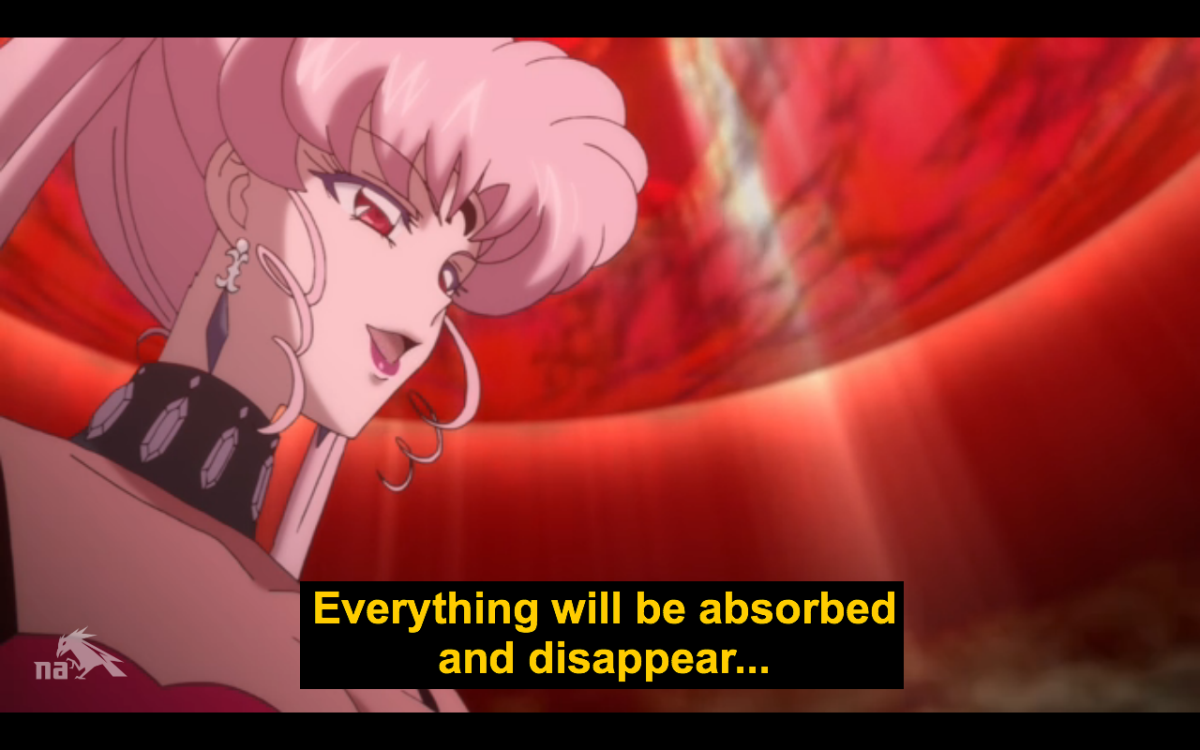 Black Lady explains that the Black Crystals are dissolving the remains of Crystal Tokyo, both buildings and people. (And…people? That’s a horrifying revelation no one seems to be overly concerned about.) When asked how she can do this, Black Lady responds that she has the only thing she wants—Mamoru. She then instructs him to hurt Usagi, which he does by hitting her with the moon rod born of their power. With an utterly blank expression. Wow, okay. That’s incredibly disturbing.

And you know, I’d like to give this show a lot of credit. Recently it feels like there has been a never-ending parade of graphic depictions of violence against women, many of which drown whatever point they were making in gore and screams. That’s not necessary if what you’re trying to show is that domestic violence and violence against women is bad. This is all that is necessary to make me uncomfortable and sad—a single, dramatic strike with lots of emotional resonance. It’s truly painful to see Usagi not even try to dodge the blow, believing that her beloved Mamo-chan will snap out of it for her sake.

After he doesn’t (can’t) stop himself, Usagi gives a speech of yet more emotional depth; not to Mamo-chan, but to Chibi-Usa. She repudiates her weird jealousy, asserting that obsessiveness and control is no way to really love. Instead, she says, love is about the connections you make with many people, and that it’s only to the good when you share your love with more people, rather than fewer.

This is the first thing to get through to Chibi-Usa, who then has a flashback of Pluto. Naturally, it makes her angry, and she and Demande attack Usagi. Demande, rather petulantly, asserts that “love obtained by force. That’s a kind of love, too,” which is just the lamest MRA-esque thing to say, and they rightly just kind of move past it.

Chibi-Usa brings yet another Black Crystal crashing to earth, and yada yada yada, we love destroying stuff because we’re Evil. The Silver Crystal finally responds, and and we get the first hints of Wiseman’s true plan – using Chibi-Usa and Mamo to finally get his hands on Usagi/Queen Serenity. He also plans to destroy the planet entirely, which is apparently where Prince Demande draws the line. 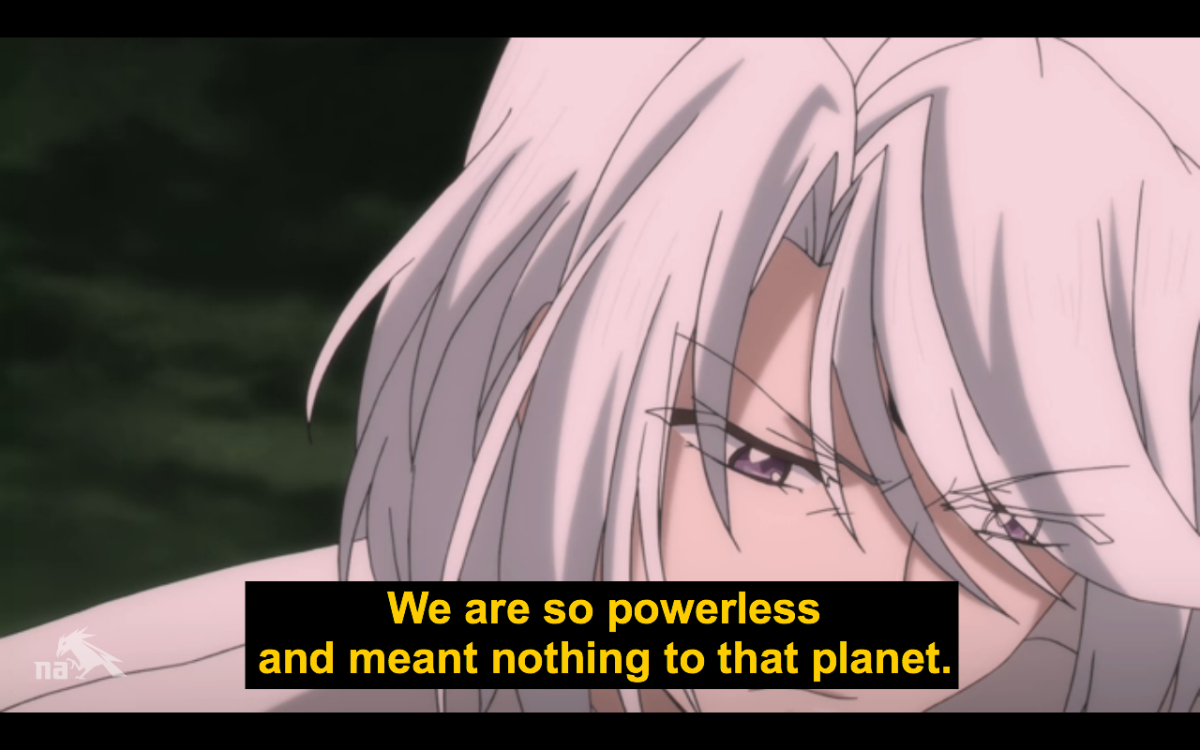 Demande correctly identifies irony as “giving your henchman a power that he then turns on you,” but fails to notice the other irony at play: he’s defying Wiseman for the sakes of Rubeus and Esmeraude, his dear comrades, but immediately faces off against Saphir to do so. Well, Crystal, you tried. Saphir, whether because he’s under Wiseman’s spell or because he’s really committing to this whole annihilation-of-the-universe thing, attacks Demande, and Demande obliterates him. This tragedy of brother against brother takes approximately 20 seconds and is a far, far cry from the tragic combat of the original.

Finished with that, Demande turns his third eye beam on Wiseman, who is revealed to be a…hm…an illusion? A corpse-puppet? Unclear. Anyway, it’s not really Wiseman. Wiseman is actually…the entire planet of Nemesis!

Okay, I didn’t see that one coming. That’s cool. Good job, Crystal. Also, that’s a nicely timed commercial break. This episode doesn’t make me want to immerse myself in a vat of boiling acid! Yet. 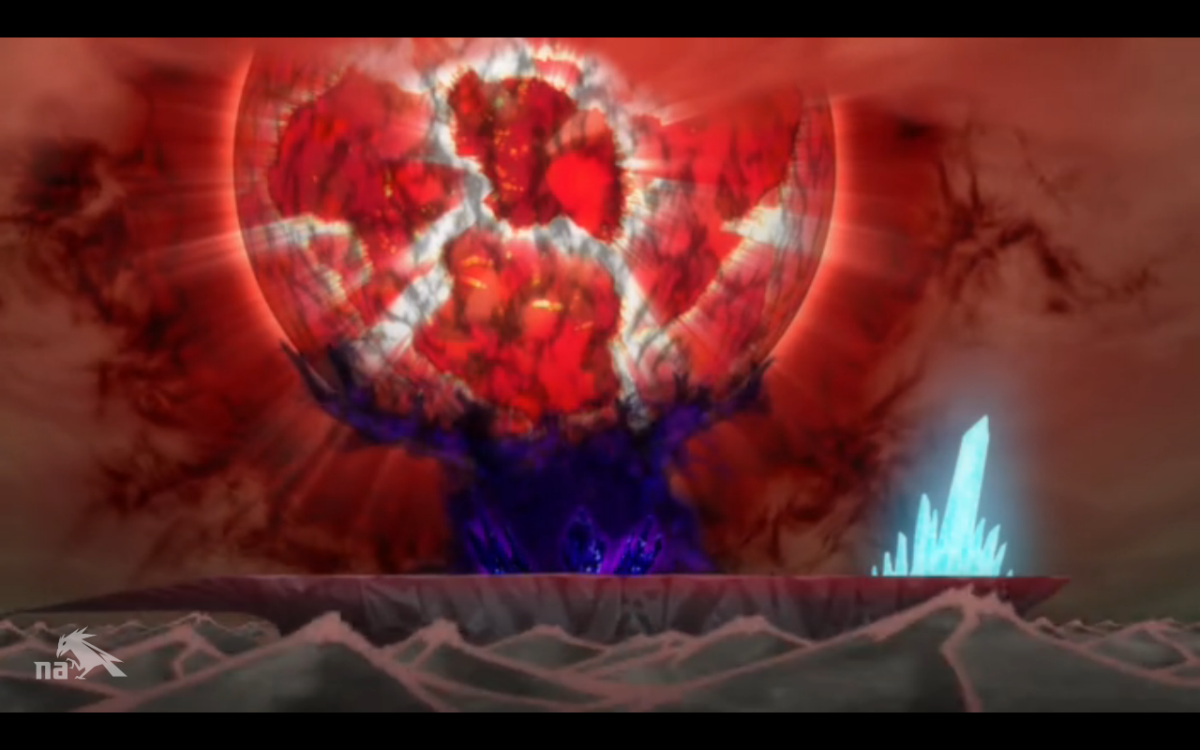 We return from some of the worst targeted ads ever (not relevant, but how have car companies not realized that their commercials all look the same and are equally unappealing to millennials, who would rather have a smartphone than a car?) to see Pluto hesitating at the Space-Time door. The storm has suddenly disappeared, but it has not dispelled her unease. She wants to fight with the other Senshi! But she was told never to leave the door or travel through time. By Queen Serenity.

All right, hold up. First off, Queen Serenity basically exiled Pluto to eternal loneliness? That’s horrible. Second, “don’t leave” necessarily implies “don’t travel through time,” so that really only needs to be one rule. Third, since it is two rules for some reason, and Pluto already went Marty McFlying off with the other Senshi, she’s going to be in trouble anyway. So she might as well just go.

And this is what Diana tells her when she rushes from the battle back to the Space-Time door. Good kitty. 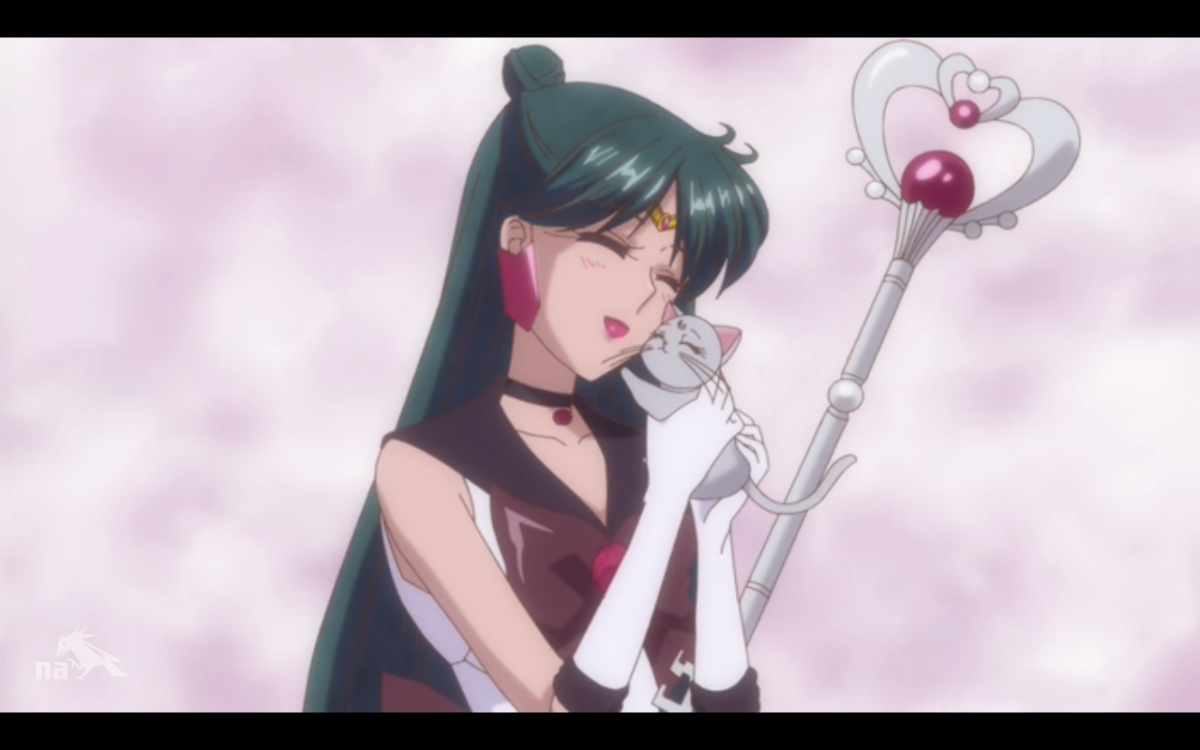 Pluto runs on to the scene just in time to see some very swift shifts in power. First, Usagi relinquishes her power to Chibi-Usa. This is a smart move, given that Chibi-Usa is her heir, and such kindness is at the heart of what makes the Silver Crystal(s) work. (Also she can’t hold out forever.) But Chibi-Usa is unmoved, and forces Mamoru to snatch the brooch off Usagi’s uniform. This causes him to regain control but, before he can do anything, Chibi-Usa snatches the second Silver Crystal. She has about five seconds to gloat before Prince Demande snatches both Crystals from her outstretched hands.

It’s such a wonderfully absurd moment, a gotcha! in an otherwise overly serious show, that I can forgive Demande a little bit for being a complete moron. Oh, but wait, he’s completely insane. I guess killing your brother and finding your cherished dreams are dust and your mentor has been manipulating you and your crush doesn’t love you might do that.

Oh, and if he touches the crystals together, the universe will be destroyed. Thanks for that incredibly important piece of information, Pluto, in this, the eleventh hour. But we’ll have plenty of time to brood over it, since the episode ends on what might be the first genuinely interesting cliffhanger I’ve seen.

Just when I think this show is something my cat barfed up, it turns things around and manages to dig up some inspiration. I am actually looking forward to next week. Whodathunkit?