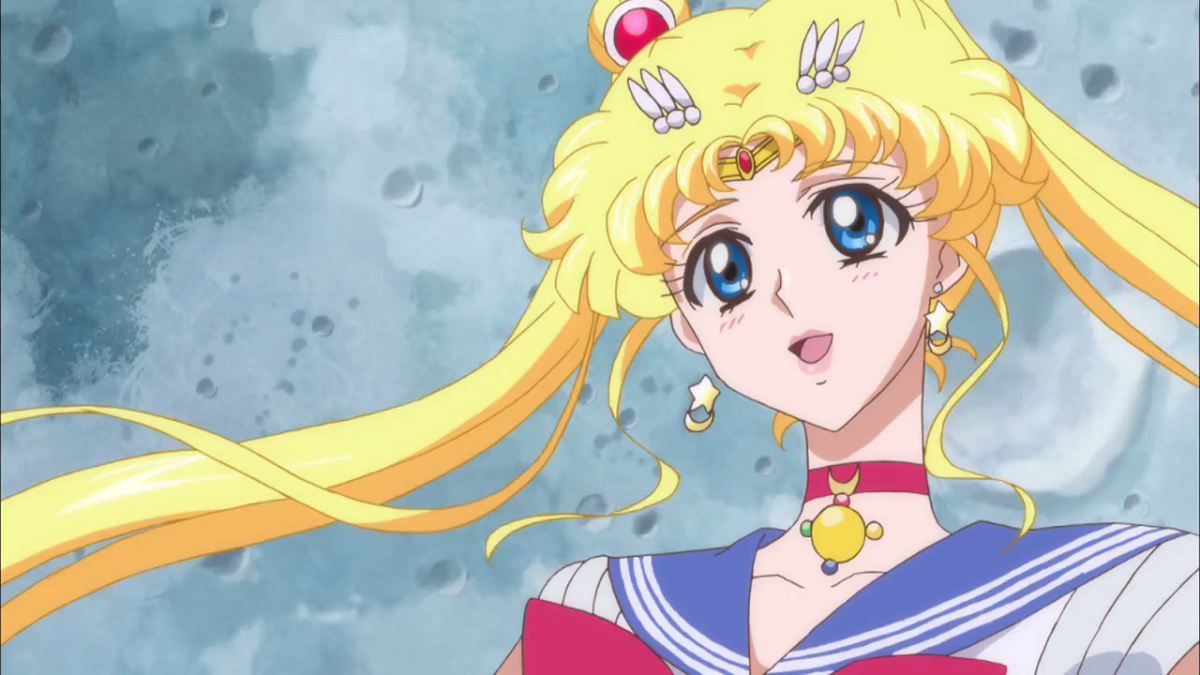 Disclaimer: I was a 90’s kid in only the most temporal sense of the phrase. I missed out on most of the cultural touchstones–I’ve never seen an episode of 7th Heaven or Dawson’s Creek–and that includes missing out on the awesome girl power of Sailor Moon. Fortunately, Viz and the Internet have conspired to remedy that gross oversight, and I’ve been watching my way through the originals since the moment they were released. However, I don’t have any of the nostalgia for the series, nor do I share the pain of those who had to brave dial-up to get badly dubbed or inaccurately translated versions of the show. I’m a clean slate. Sigh.

Anyway, these reviews will be taking on Sailor Moon Crystal, the 2014 reboot version of the first Sailor Moon series. I’ll have watched the original, but it won’t be looming so large in my memory as it does for the hardcore fans, so hopefully I will be a little more objective, though a little less knowledgeable. If you’re cool with that, then Internet Review Power, Make Up!

Two mysterious figures run toward each other and embrace, a dreamy moonlight showering them in light…just in time for Usagi to be late to school. The titular character emerges from her dream in all her irresponsible, clumsy glory just like the original, and I couldn’t be more pleased. One of the great things about Sailor Moon is that the heroine isn’t very heroic. She’s a crybaby, she’s easily scared and not very brave, she’s greedy and gluttonous, and she’s not the brightest. These qualities don’t stop her from being a super-heroine. In fact, as I hope we’ll see, they actually help her. Usagi is at her best when she’s being herself.

Well, at least when it comes to being Sailor Moon. But she’s not Sailor Moon yet. She’s just Usagi Tsukino, late for school because she helped a stray cat, and in the pits because she bombed an English test. Though compared to the original, she’s not nearly as devastated.

I’m not the first to be lukewarm on the animation style and I won’t be the last, but I don’t hate it. It’s bright and crisp, which the original series sometimes struggled with. But it lacks a different kind of vibrancy that the original made so effortless: the pure, zany energy of the cartoon style. When Usagi was hungry, her entire face contorted in the overblown agony she no doubt felt; here, she just looks unhappy. There was an immediate emotional connection to almost everything in the original because the characters’ reactions were so dramatic. Yes, it’s a difference of style rather than skill, and yes, anime styles have changed in the past 20 years. Still, even without a strong connection to the original series, I find myself missing the over-the-top animation. Crystal is fighting with the medium to eke out realism and somehow preserve the sense of the original. The original just went with the medium to have some fun. 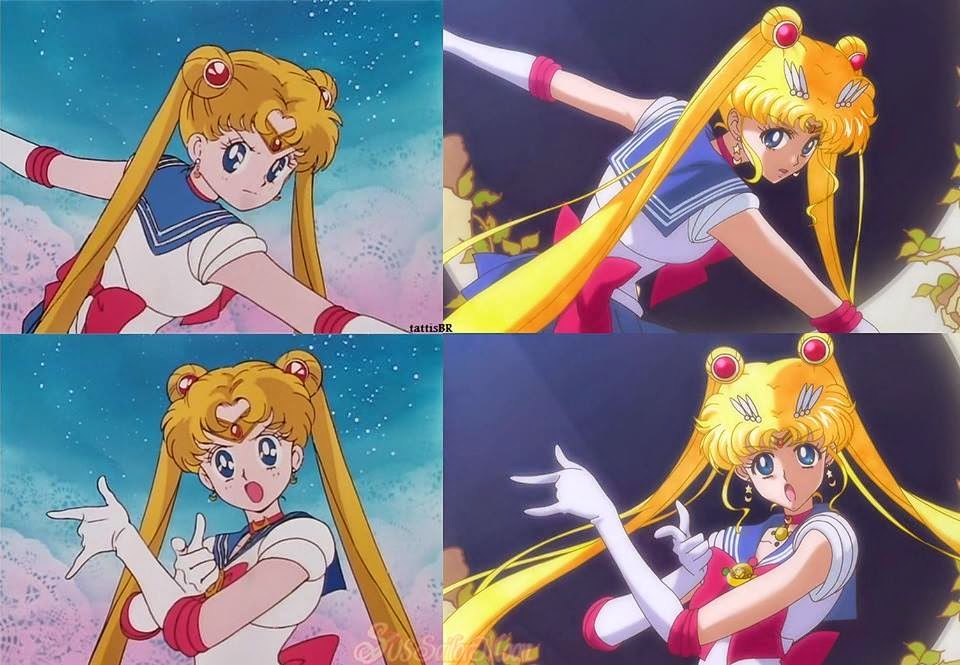 Fortunately, the voice acting remains strong, and preserves Usagi’s range. It’s not easy to go from whiny to frantic to pouty to starstruck and stay cute, but she and everyone else do an admirable job, including Tuxedo Mask. Speaking of whom…

What is he doing out in broad daylight in white tie? And wearing a maltese cross? Unless they’re in Shinjuku (they’re not) or he’s going to meet the Emperor (he’s not, but that would be an interesting side story), it makes no sense. And Usagi doesn’t even react to it, or to anything else once she sees him. They just stare at each other in a Past Life Recognition daze. Look, I get it. He’s Tuxedo Mask. I got it in the original when he was wearing semi-normal clothes (it was the 80’s, so I’m not going to say they were completely normal). I don’t know why they felt they had to hit everyone over the head with it. I’m also not thrilled that aside from a little sniping, they don’t go in for the full blazing contempt that the two had for each other at the start of the original series, but perhaps they intend to take a different tack with the romance part of the story. It could be interesting. The original was a little predictable in that department.

Usagi storms off from their brief confrontation/googly-eye-making session and ends up in the arcade playing a Sailor V game, while Mamoru reveals that he has his own agenda. It’s nice that they get that out there right up front. And while Usgai is trying to wheedle her way into her mother’s good graces and lazing about, he’s sneaking around the mysterious jewelry store. She has a lot of catching up to do, but fortunately, Luna the cat appears again and gives her the magic brooch to enable her transformation.

Oh, god, the transformation sequence. Look, I wanted to like it. I was rooting for it. The music is good. A new technique, a new take! Bring it on! But…no. It’s an abomination straight out of 2005 CGI. Sailor Moon is standing at the nadir of the Uncanny Valley, waving her freakishly rubbery arms. Does she have extra joints? Did she lose her bones? The original did such a great job of skirting (puns always intended) the line between sexy and sexualized, but this doesn’t make me, as a woman, think that her body is an awesome source of power and confidence. It makes me want to consult an orthopedic surgeon.

When it mercifully ends, we get the First Battle, where Usagi encounters a horde of women turned into zombies because of their lust for jewelry. A commentary on modern greed! Well, no, not really. Usagi was just as greedy, she just was also terrible in school, and therefore couldn’t get any of the cursed gems. This show manages not to trap women in the usual double-bind of “look great but don’t be vain! Love to shop but don’t be greedy!” It’s remarkably–

See, right afterward, Usagi is finally trapped by the zombies, and doesn’t know what to do. So she bursts into tears. That’s not the issue. I think most people would cry in that situation. Plus, her sobs turn into ultrasonic waves! The very thing that makes her her–being a scaredey-cat crybaby–is what saves her! And then–ugh. Tuxedo Mask shouts at her to stop crying, and she does.

See, in the original, she doesn’t stop crying just because some dude says so, and that’s when her ultrasonic powers trigger. But here, she stops crying because a male voice from somewhere on high tells her top stop. What the hell, Sailor Moon? I thought we were friends! But no, you miss the subtle greatness that this episode used to have.

So Sailor Moon stops crying, learns how to throw her tiara-boomerang, and the day is saved. WHATEVER. The only thing that redeems this is, at the end, we get a glimpse of Mizuno Ami’s back as it starts to rain. At least they’re not delaying in getting to the rest of the Sailor Senshi. Next week: Sailor Mercury!