We resume the action from last week with Beryl re-orienting us as to Tuxedo Mask’s enchantment, which she now calls his resurrection into evil. The Senshi are in bad shape.  Things are looking grim. 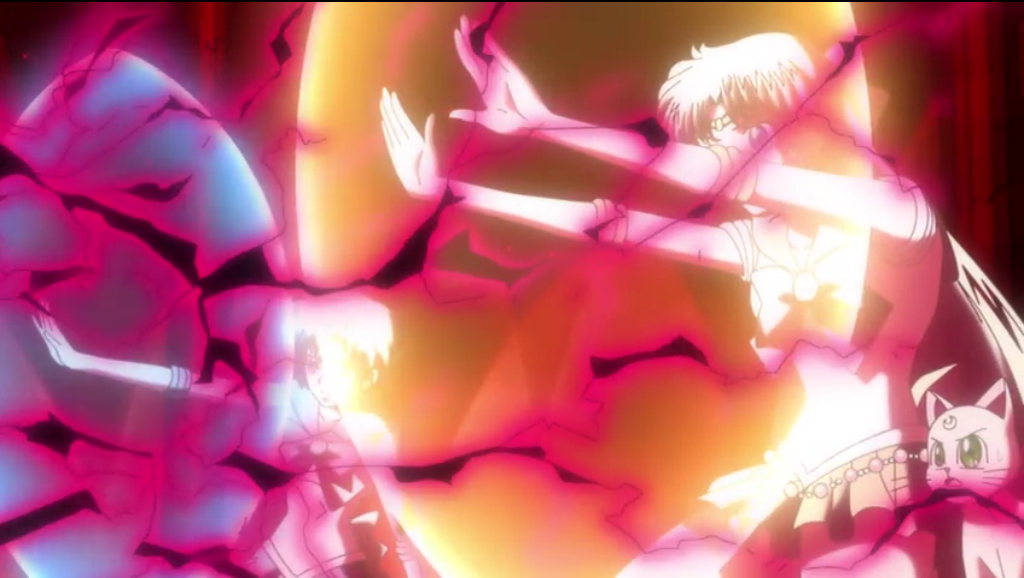 Oh no, the dreaded down-B!

In the only moment of things going right, Jupiter wakes from her enthrallment and steps in to guard Sailor Moon, who simply can’t believe that Tuxedo Mask would harm her.  The Senshi all have shields (kind of like in Super Smash Brothers) that they use to diminishing effect, which makes sense, since they’re presented even more strongly in Crystal as guardians of the princess, and the princess does seem to need some serious guarding.

Mercury, putting those glasses to good use (somehow), creates a hyperspatial sphere, which I think is a pseudosciencey way of saying that they didn’t want to animate a background for this fight, since the “barrier” takes them to some formless dimension.  It is quintessentially Sailor Moon, though, since a lot of the old series relied on this non-space to stage its fights, so fine, Hyperspatial Sphere it is. 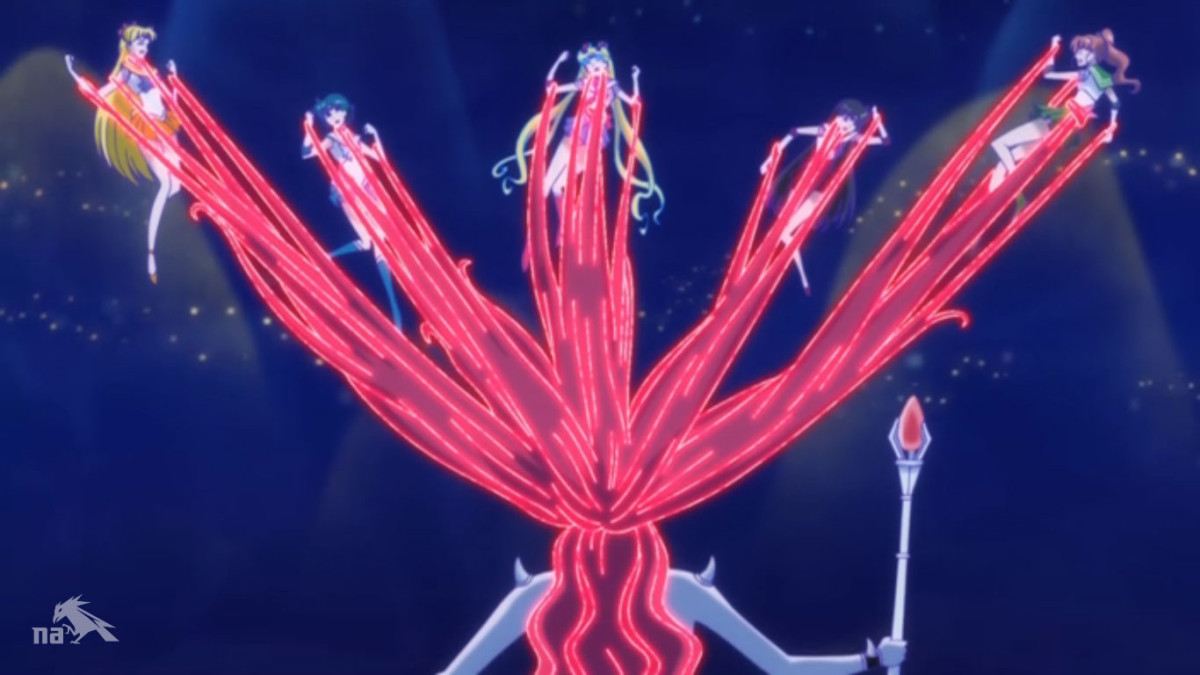 Not that it matters.  Queen Beryl immediately ensnares them all in her…hair…which apparently she’s been waiting to do for a long time.  Whatever floats your boat, Beryl.  I’m not touching the puberty/maturity/sexuality metaphors on this one.

Venus takes this hair-captivity as an opportunity to reflect on the past, because sure, and realizes only now that Queen Beryl was the one who led humans to attack the moon in their past life.  This revelation is based on memories that aren’t even hers–they show a flashback of Serenity watching Beryl stab Endymion.  As I recall from a few episodes back, the Inner Senshi weren’t even present during that exchange; they were off fighting elsewhere.  But fine, it’s magic.  I’ll get over it.

To their credit as optimists, the Senshi urge Queen Beryl to throw off Metalia’s power, believing that she was corrupted against her will.  She predictably does nothing of the sort, and begins hurting them. 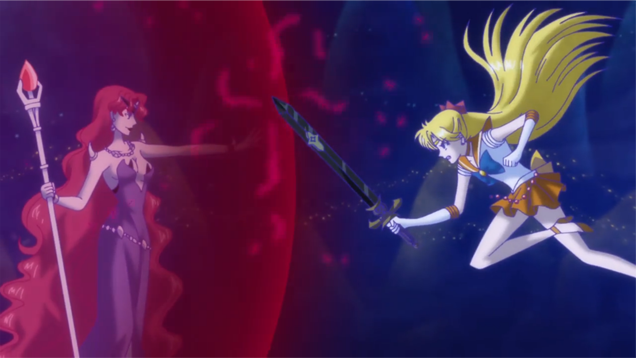 This, to my great surprise and delight, only makes Venus angry.  Yes!  She does the anime equivalent of hulking out, which is getting a magic sword (she’s already blonde) and using it to give Beryl an unflattering haircut.   Then she hurls herself at Queen Beryl herself, but can’t get through the barrier.  Not by herself anyway.  The Senshi join forces, deflect Queen Beryl’s attacks, and stab her–right in the necklace.

The necklace, as Mercury helpfully discovers, is the link between Beryl and Metalia.  Once again, Sailor Moon isn’t bent on hurting or destroying her enemies, she wants to help them.  The sword, united with the power of the Silver Crystal and Sailor Moon’s fierce determination, is enough to shatter the necklace (which I should give credit to, it’s simple to the point of being primitive–as in, tying-rocks-to-sticks neanderthal primitive–which evokes in turn a very, very ancient evil).  Queen Beryl withers and begins to fade. 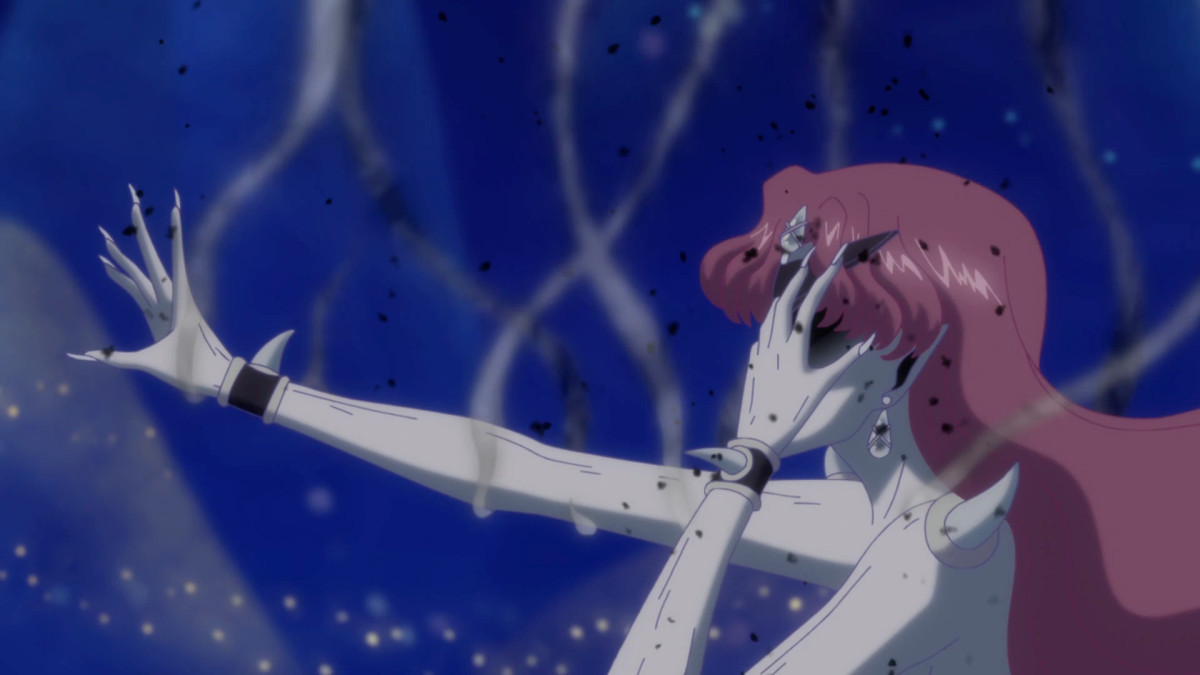 And in her dying moments, she reaches out to Endymion and recalls her unrequited love for him, burning all this time.  This entire conflict, which has stretched beyond life and death and caused the demise of two civilizations, is because some crazy woman couldn’t get over a guy.  Way to go and ruin things, Crystal.  You fucking assholes, you couldn’t even let me have a great villain scheming to betray her mistress and use her rival’s love interest against her because she’s spectacularly evil.  It all had to be because of some dude.  He’s not even that great, and you destroyed two whole worlds for him?  Just…just…fuck you. 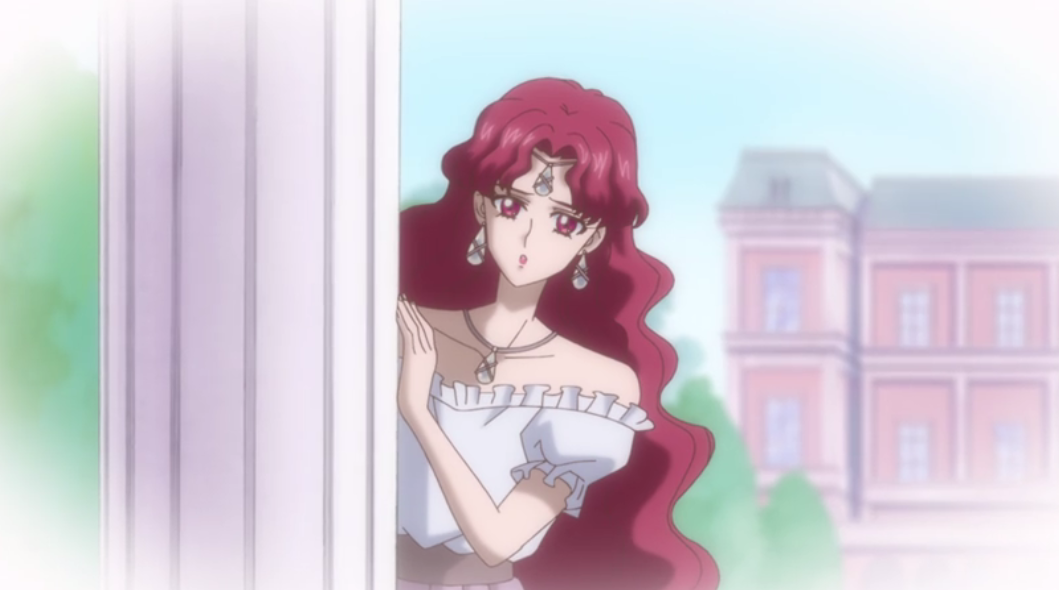 (Thirty minute interlude while I watch an episode of the original and seethe.)

Great, well, disposable woman is disposed of, and Endymion snatches the sword away from Sailor Moon after they learn that it and the Silver Crystal can restore peace to the moon kingdom.  Sailor Moon follows him in his retreat to the Dark Kingdom by herself, leaving her guardians yelling quite reasonably about the holy sword, the silver crystal, and, you know, the fate of an entire people.  Well, at least she’s ditching all that for a guy who…uh.  Who…helps her out sometimes…kind of…

I’m going to pause (again) at the midway point to imagine that Usagi lets Mamoru run back to the Dark Kingdom, uses the down time to reassert the Moon Kingdom, establishes peaceful relations with Earth, create defenses, and then defeat Metalia, reigns in glory, and gets a boyfriend who doesn’t SUCK.  Or a girlfriend!  Or a goddamn pet rabbit.  Don’t care.

But now back to reality: Sailor Moon pursues Tuxedo Mask to a snowy balcony, and though she makes him pause with mention of her old name, Serenity, he grabs her and holds her up by the throat.  Then he demands that she tell him why the Silver Crystal doesn’t work, because he has no grasp of physics or physiology.  Choke-holds are not conducive to talking, dolt. 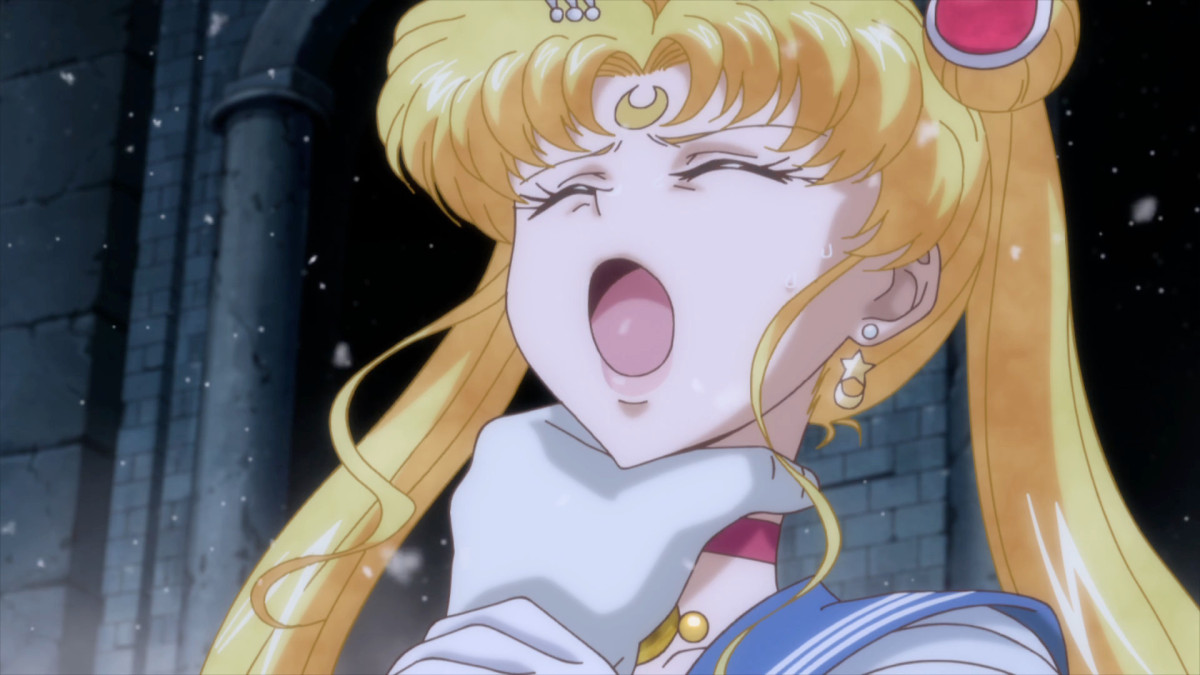 It’s up to the Inner Senshi to save her once again, and they follow her signal to the North Pole, where they encounter the Four Kings.  It’s never been clearer that the men have been enchanted by a busty evildoer out to steal someone else’s man, while the girls remain pure and devoted. 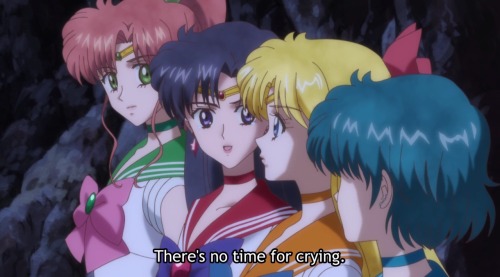 (Unless you’re the reviewer.)

With the Senshi held up, Sailor Moon is left alone to face Metalia when she emerges from the darkness as a torrent of pink fire, which let me tell you, does not go with her red lip.  Garish.  Get her, Sailor Moon!  For fashion!

The Senshi do eventually beat the Kings into remembering, at which point they have exactly 5 seconds of tender reunion before Metalia appears, obliterates them (but not the Senshi?), and then disappears.  What the hell?  But the girls carry on after Kunzite’s disembodied voice tells them they must go on (oh, a man told them what to do! So it’s okay! Yippie!), and join Sailor Moon to fight Metalia, who is making sounds that I think are meant to be horrible, but just sound like a child sticking out his tongue in the doctor’s office. 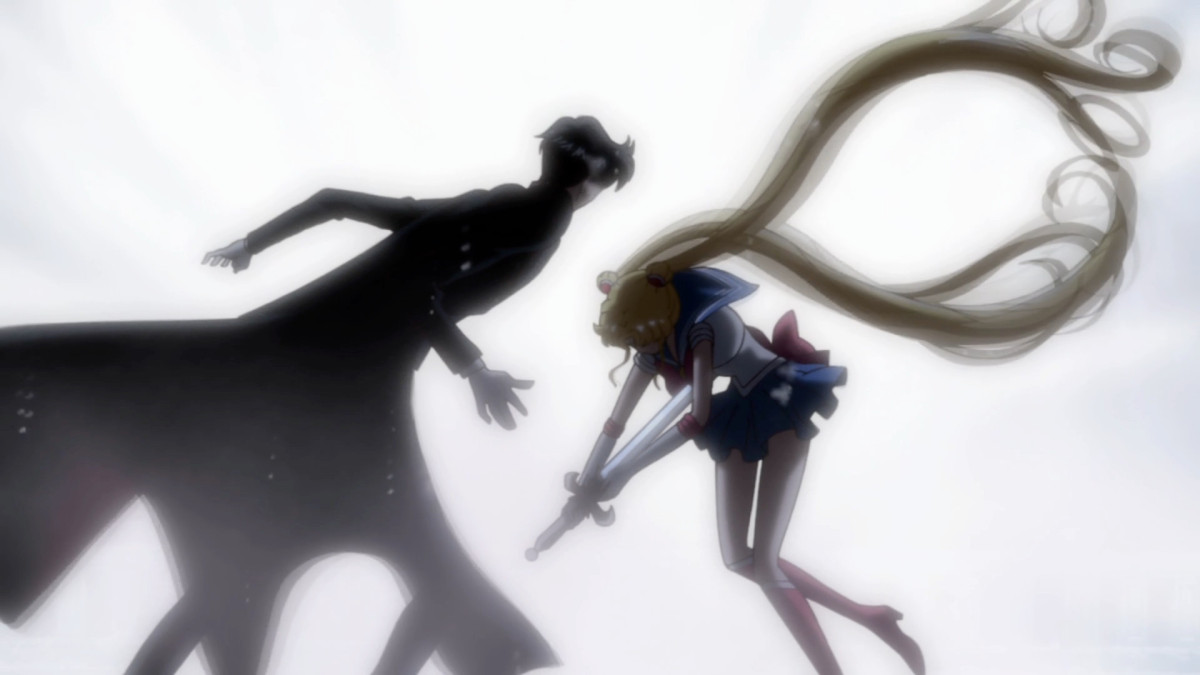 They don’t get there in time to prevent a murder-suicide.  That’s right. Usagi “can’t bear” to see Mamoru in the thrall of evil, so she cuts him, and then turns the sword on herself.

Next week: maybe Sailor Moon Crystal, maybe some other show that doesn’t make me want to weep for feminism.  We’ll see!