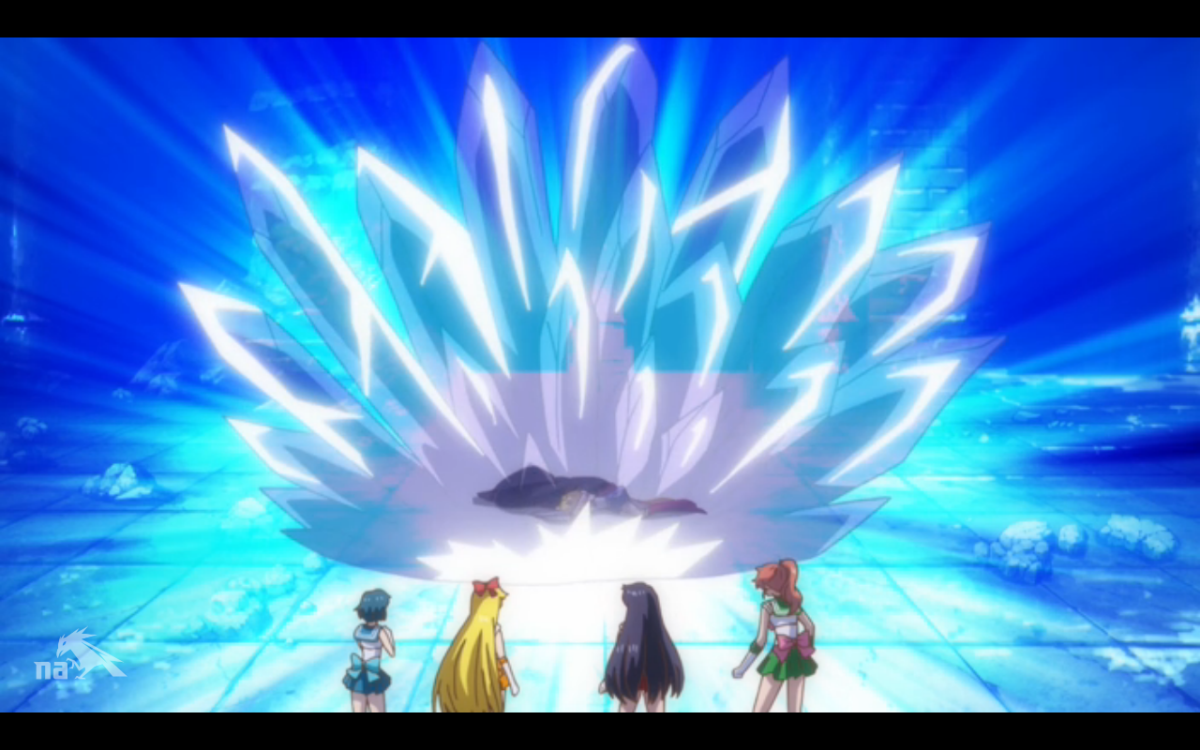 I decided to do these reviews without rating them, since I figured that the show might need some time to find its rhythm, and I didn’t want to damn it (or, by association, its predecessor) by being initially lukewarm.  Last week’s episode proves that I was so very wrong.  It deserved an F-, and if there were anything lower, I would give that.  There are not requisite letters in the alphabet to express my dismay and disgust, nor does any number to the very utmost of negative infinity do justice to the travesty that Crystal has wrought on the original Sailor Moon.  Apparently, “crazy” women who can’t get over men are the cause of ultimate evil in society, and the solution is murder-suicide.

Fortunately, there are only two episodes left, and I’m morbidly curious about the depths to which this can further sink.  Also I have some very good tequila to numb the pain.  (Fidencio Mezcal, for those so inclined.)

We get to re-watch Usagi kill Mamoru and then herself, like that wasn’t upsetting enough last week, and then the Silver Crystal grows around them like Snow White’s coffin. The part that was in Mamoru has reunited with the rest, but fat lot of good that does, as Metalia rears up in lurid pink glory and swallows it whole, dead teenagers included.

Everything disappears, leaving only the sword behind. But hey, Artemis says the Silver Crystal will protect those two crazy (dead) lovebirds, so they all take off, the Senshi to follow Metalia and Luna to Moon Castle, to pray. I do appreciate how the Senshi’s powers have been tweaked to let them fly, shield, and teleport; it’s not a lot in terms of battle power, but it does make them miles more competent than they seemed in many instances in the original, when they would get one attack, and it would work or wouldn’t (usually it wouldn’t). 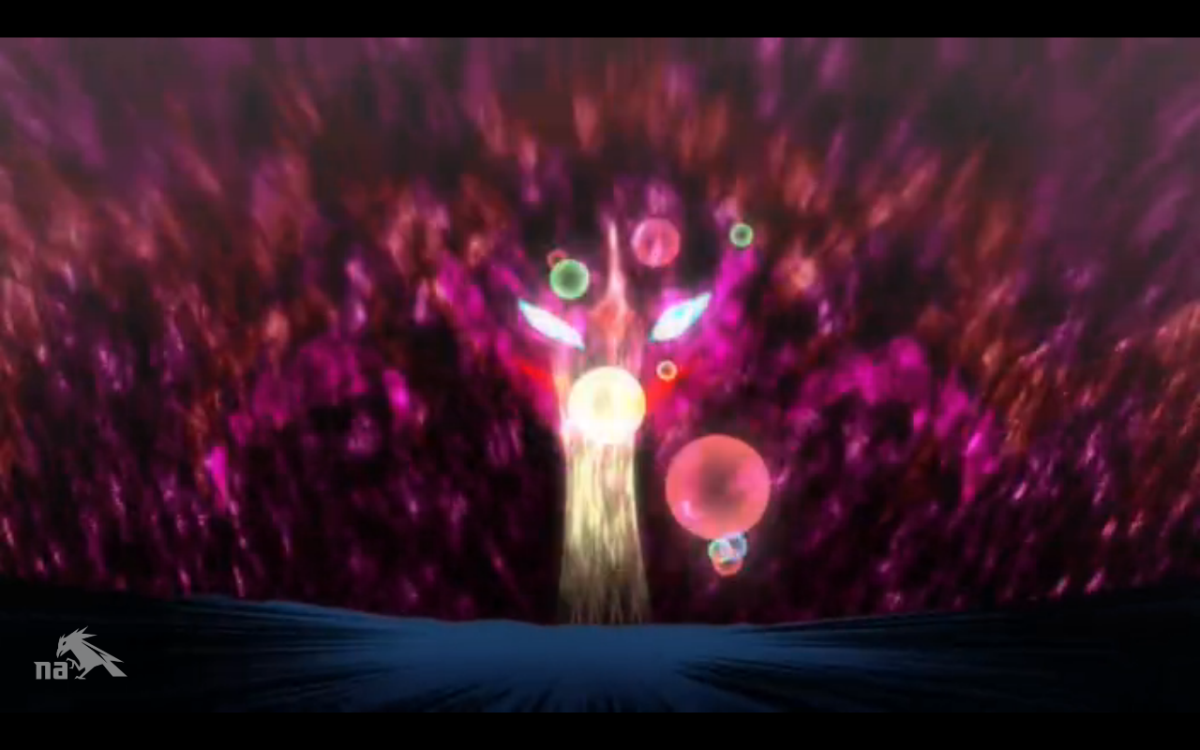 They combine once more to make their ultimate Planet Attack, which is a gorgeous piece of animation. Alas, it accomplishes nothing, and Metalia begins to engulf the world, turning cities to ash. Defeated, they sprawl on the ground, as far above, Luna begs Queen Serenity to save her daughter and the world. 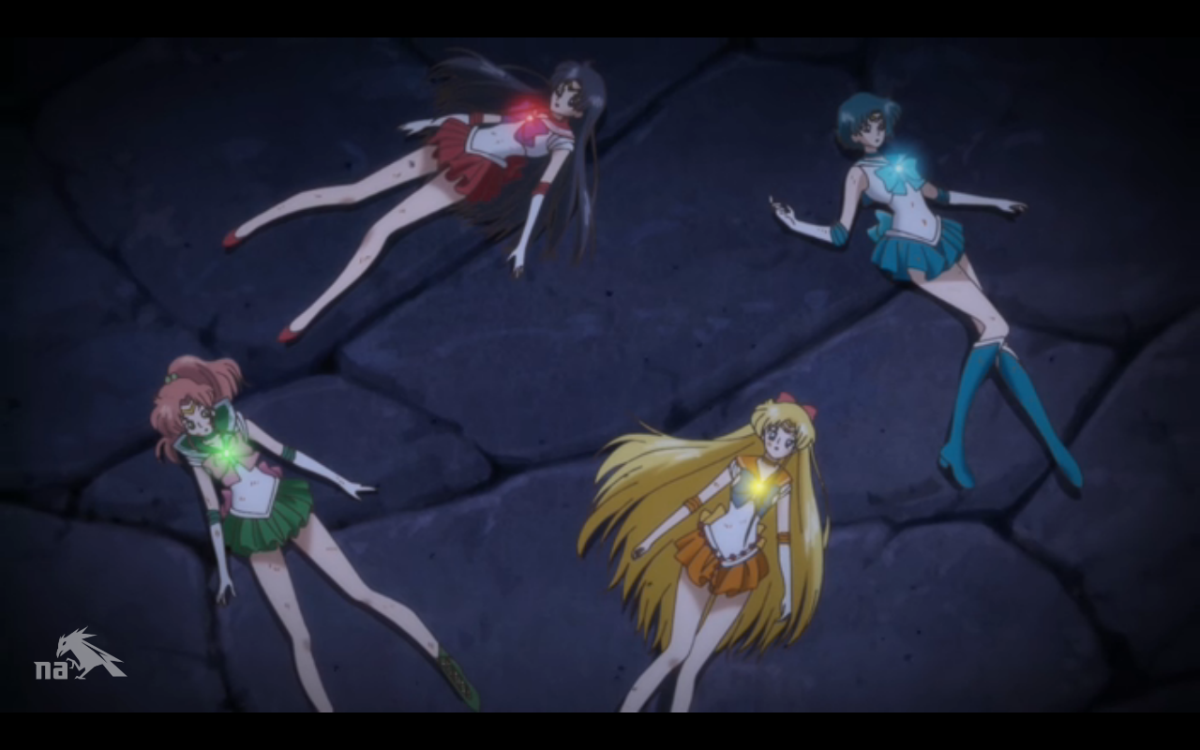 When all hope is lost, four motes drift down from the ashy sky. They land on each of the Senshi, and fill each with the memory of Usagi flirting with them bringing them their first taste of love and friendship. They rise again, and there’s another beautiful moment when Venus reaches for Usagi’s hand, only to find herself holding the Moon Sword. The Senshi hurl their defiance in Metalia’s teeth, and use the last of their power along with the sword to break through to Usagi. 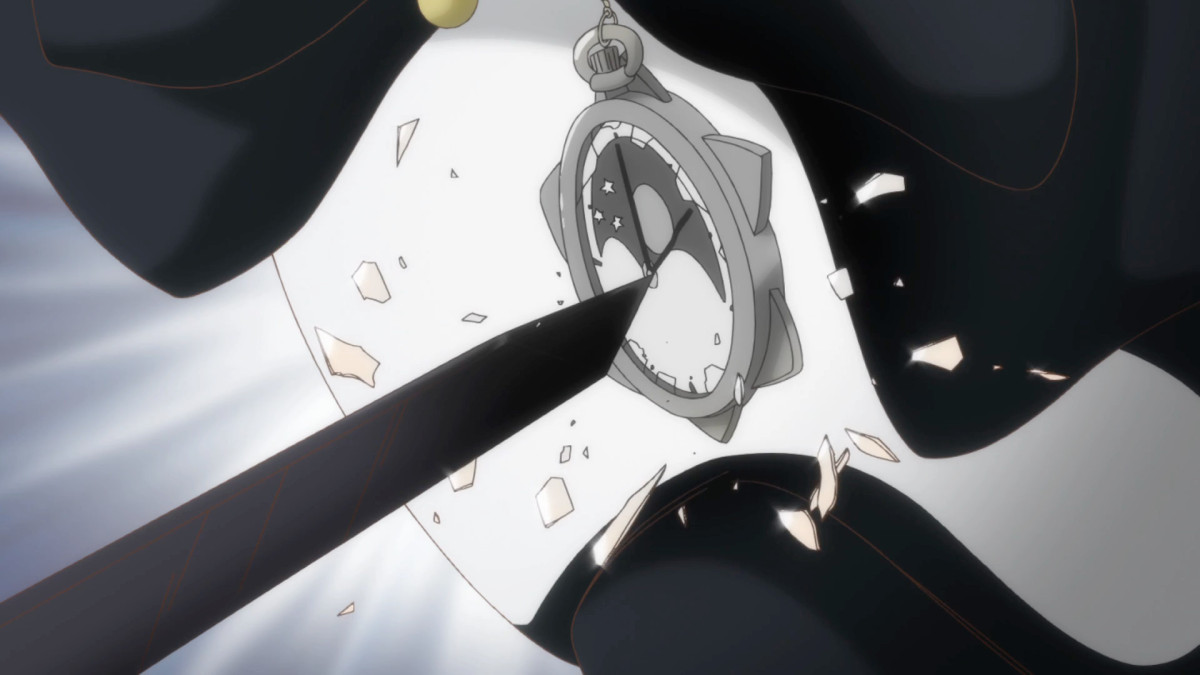 And they succeed! Usagi isn’t dead after all! Because when she stabbed herself, she actually hit Mamo’s watch. Groan. It’s a tired old trope, and it’s downright silly that she thought she was dead when she wasn’t even hurt. Not to mention the fact that four people, two cats, and a giant pokemon of evil couldn’t tell, either. Hint: look for blood next time guys. (Ami, don’t you want to be a doctor?)

Alive, but no closer to defeating Metalia. Queen Metalia surrounds and nearly engulfs Sailor Moon again, but at the last second, she grasps the Silver Crystal and asks it to take her to her friends. 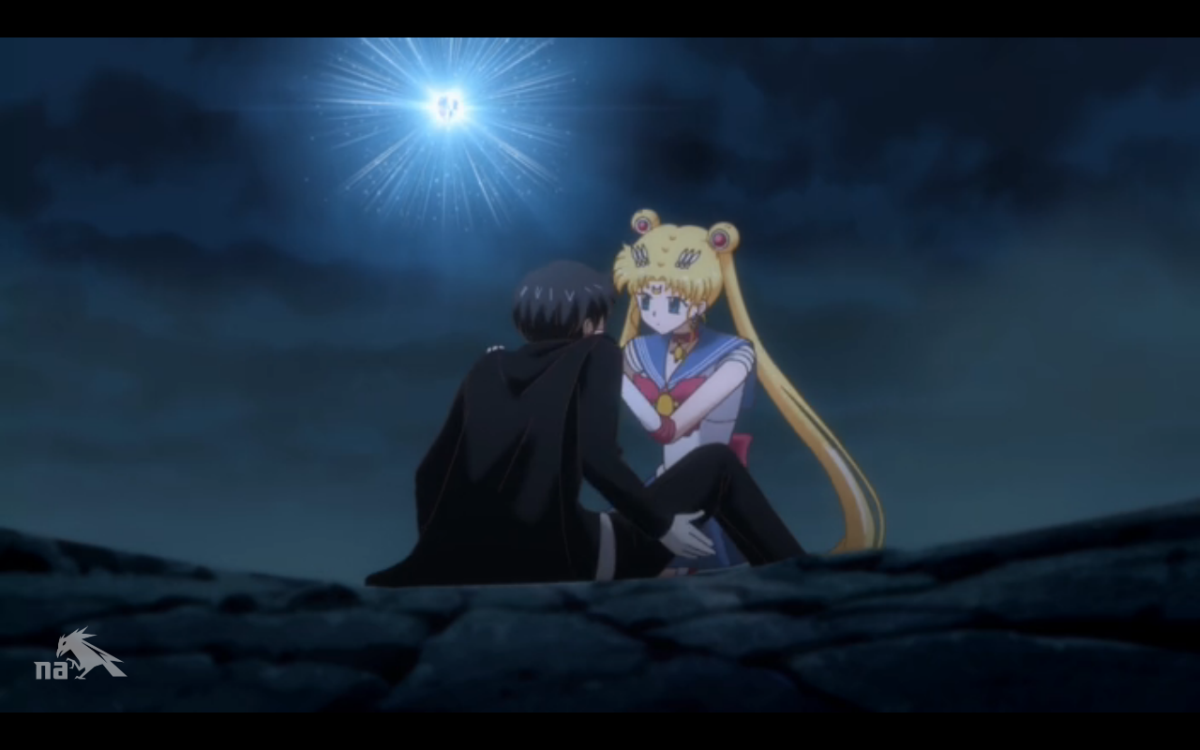 Which is I guess why they end up outside with no friends in evidence. Not that Usagi cares, because Mamoru is breathing. Thank goodness Metalia swoops down to attack, otherwise they’d just go on staring at each other. Usagi is forced to defend him with the Silver Crystal, and while she is successful at keeping her at bay, she can’t fully lock Metalia away for good. 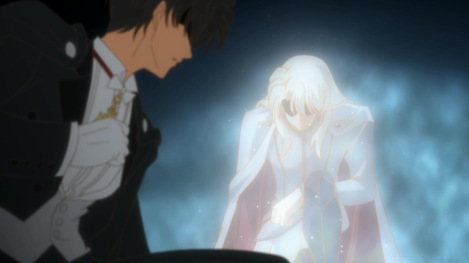 “I’ve come from beyond the grave to tell you you’re an insufferable twat.”

Mamoru, woozy from being dead and all, wakes up to find gemstones just falling out of his suit. So embarrassing. Royalty shouldn’t have to carry things–oh, wait, no, it’s the gems representing his champions. The Four Knights appear to grant a last piece of information about Metalia’s weakness, and oh, also, the gemstones that they represent were in his pocket this whole time and totally blocked the sword. LOL JK he wasn’t dead at all. These two morons truly have the greatest plot armor ever invented. 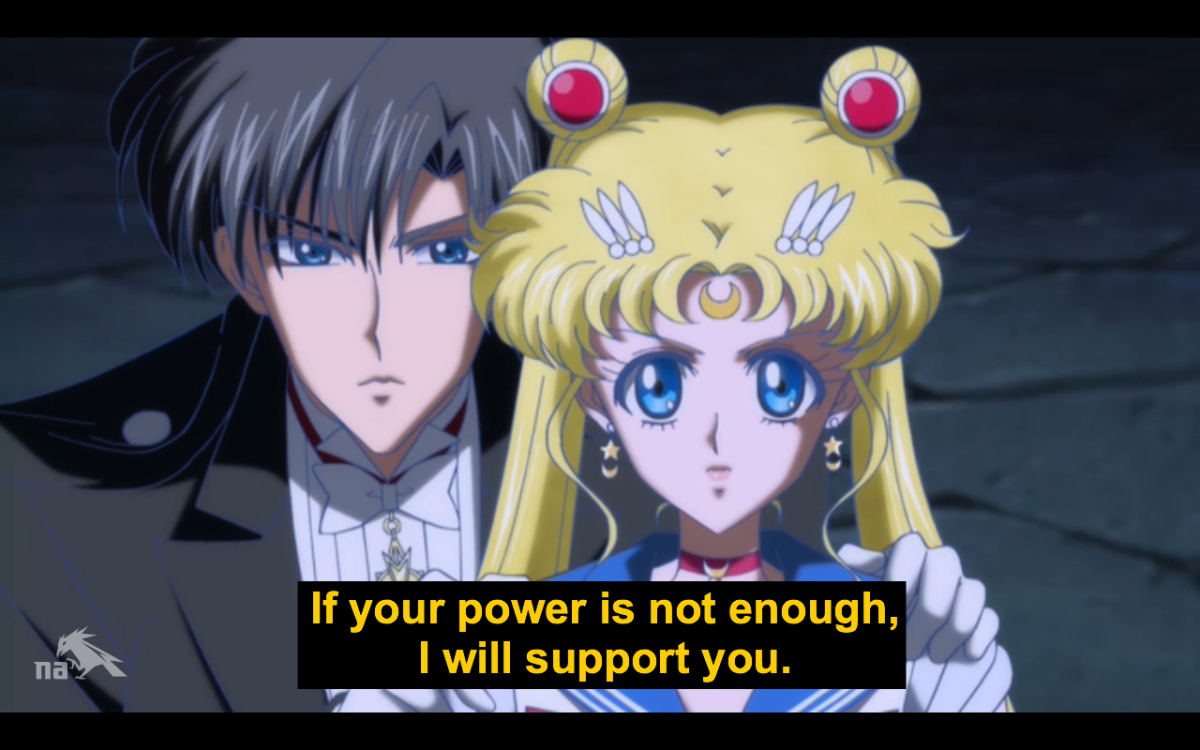 Usagi is wilting fast under the might of Queen Metalia, and fears she can’t do it alone. Mamoru catches her and reminds her that she isn’t and has never been alone. I don’t disagree with this. The ones you love should give you strength and courage, and support you even when you think you can’t do it. I just hope we also see her getting strength from her friends, and not just vice versa. 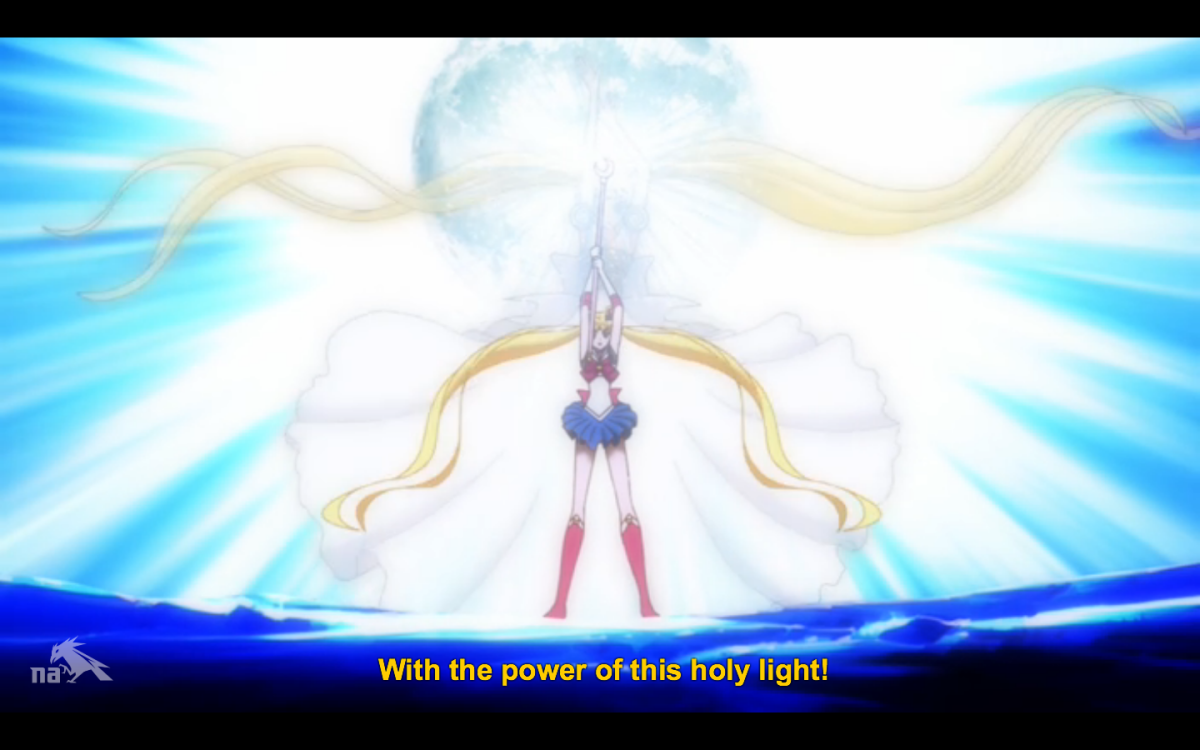 That strength of love is enough to prompt her third transformation. It’s really beautifully done on a purely artistic level to see Usagi claim her staff (as you recall, Queen Beryl had a staff, and she does represent “mature” womanhood), to see the Silver Crystal unfold from a teardrop to a beautiful lotus bloom, and to see Sailor Moon with the full moon at her back, ready to fight again. I’m not sure it redeems last week, but I suppose this episode wasn’t quite as bad.