This week’s episode begins with Mars’s abduction from last week, and Usagi’s quick accusation of Chibi-Usagi being behind it all. 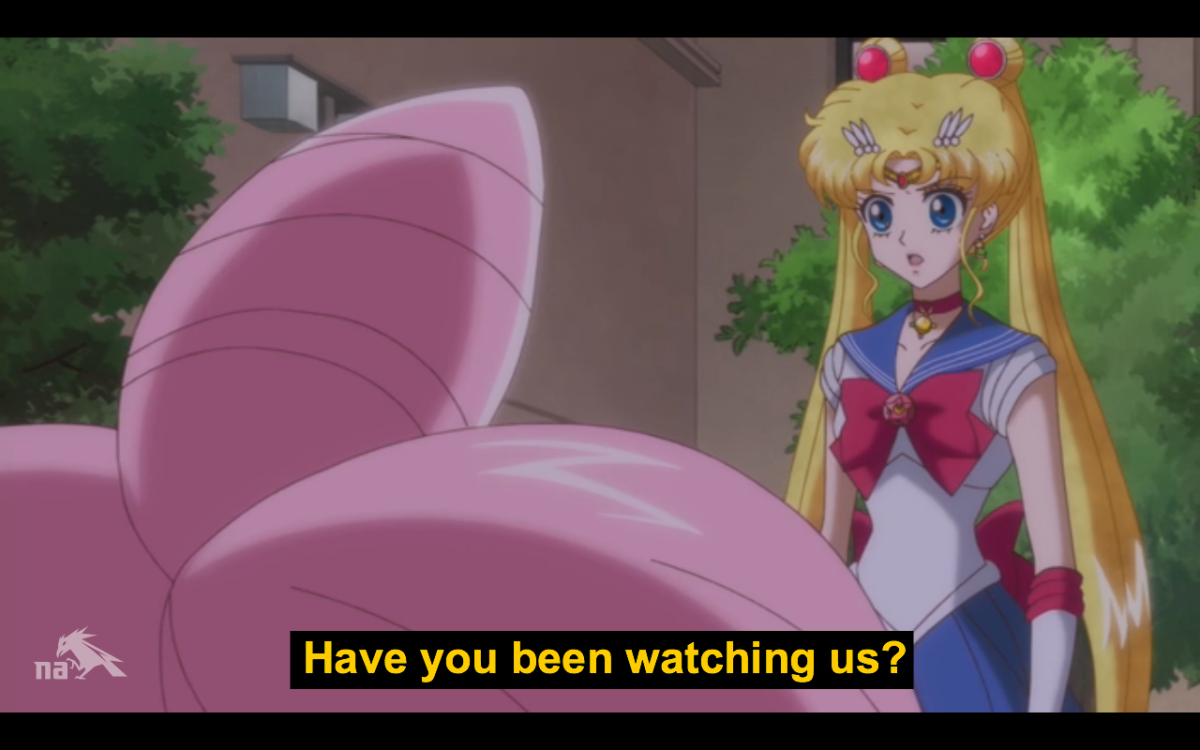 It’s not really that far-fetched.  Chibi-Usa drops from the sky, and not long after, Rei is taken up by yet more mysterious people who descended from above.  I’d be suspicious too, especially after that same little girl pointed a gun at my head, hypnotized my entire family, and had what appeared to be an exact replica of my silver crystal necklace.  But Luna defends Chibi-Usa, and Mamoru takes her home to rest.  (Why does he have child-sized pajamas?)  He even cheers her up with puppets after her bad dream of being abandoned in a wasteland, and doesn’t press her for her identity.  She opens up a little about her cat-ball before he glimpses her necklace, too, and then she quickly shuts down again. 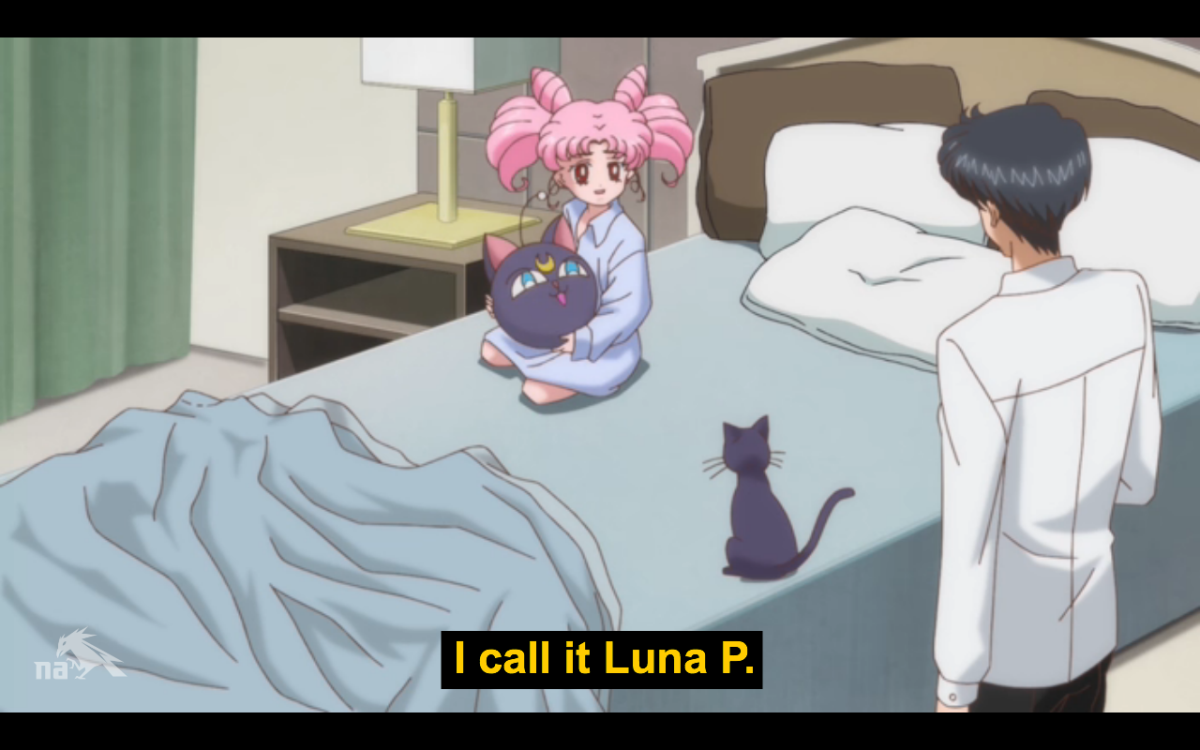 “I have a Luna P Ball.  I call it Luna P.” The first rule of the tautology club…

Before she falls asleep, she asks whether Sailor Moon is strong, and Mamoru replies that she’s invincible.  This was a nice little moment of confidence, but it was perhaps nicer in the original, in which Mamoru was (pretending to be) fed up with Usagi, and yet still gave the same answer.  Praise form an enemy, even a pretend one, tends to be more telling than praise from a friend.

When Mamoru brings her home, Usagi keeps him at a distance.  She’s angry that he’s been conspiring and, worse, sympathizing, with someone who may be related to the disappearance of her friend.  Mamoru tries to placate her by telling her about Chibi-Usa’s longing for her mother, but Usagi remains inconsolable.  The rest of the Senshi are also deeply concerned, and are searching for more information about Chibi-Usa and the Black Moon Clan.  Ami does her best thinking while she’s playing chess, apparently, a fact that has not come up before and I’m betting will never come up again, but which will obviously be important shortly. 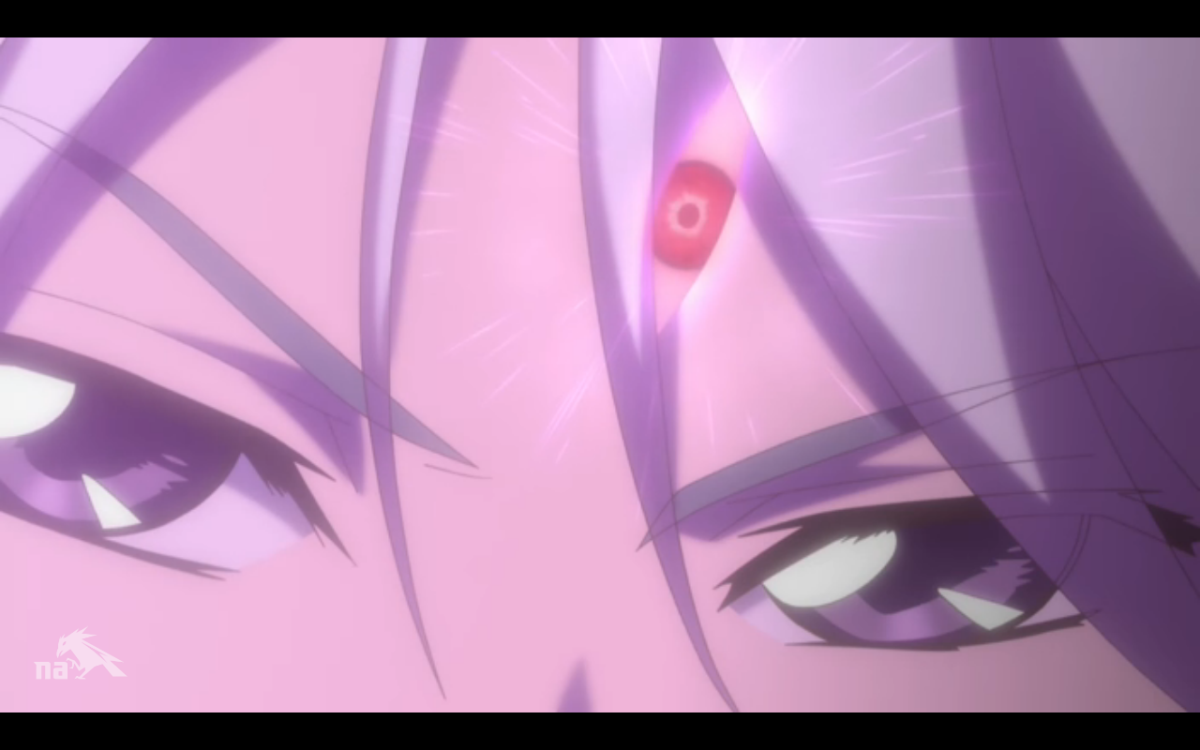 Among the Black Moon Clan, Saphir appears standing before the Malefic Dark Crystal, and rebukes Prince Demande for being too aggressive with the droids and with Sailor Mars.  Prince Demande’s Black Moon mark slits open into a baleful third eye, vertical and red, in a moment of excellent unease.  But then Rubeus appears, as does Wiseman, the seer, and reasserts their loyalty.  Berthier is selected to attack the rest of the Senshi next.  She chooses Mercury as her particular adversary.

Mercury, oblivious to these plans, is walking through school when she overhears a group of athletes complaining about a busted water fountain.  In a very cool sequence, she concentrates on the sound of water and traces the leak outside.  The illustration, with her outline shimmering like the surface of the ocean as she searched through many sources of water, was beautifully done. 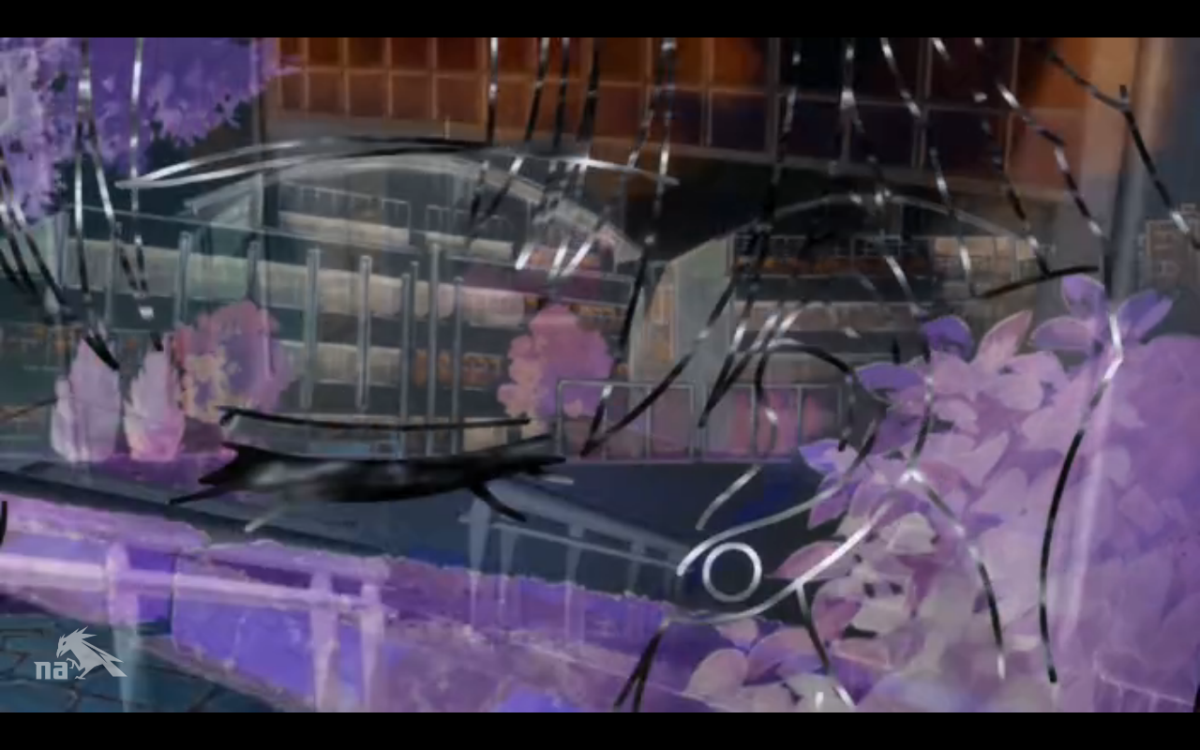 The original gave the Senshi a fairly superficial connection to their elements (except, arguably, Rei, who used a shrine fire for divination in addition to fighting with fire).  Here, I like that they’re more intimately connected with each element in the real world, and use their powers much more broadly than in three attacks.  This is the kind of deepening of the mythology that I like to see.  She also goes swimming to calm herself down.

Unfortunately, the pool just happens to be playing a newscast featuring Berthier, in a unitard, who is the number three chess player in the world and who happens to be a successful dowser who uses dowsing in chess.  I–I can’t–how the–what?  This is how they advance the plot?  By having Berthier challenge Ami to a chess match on TV?  I could list all the things that are batshit insane about this, or I could assume that it’s self-evident how the writers have no idea what they’re doing and save myself the time and irritation.  I choose the latter. 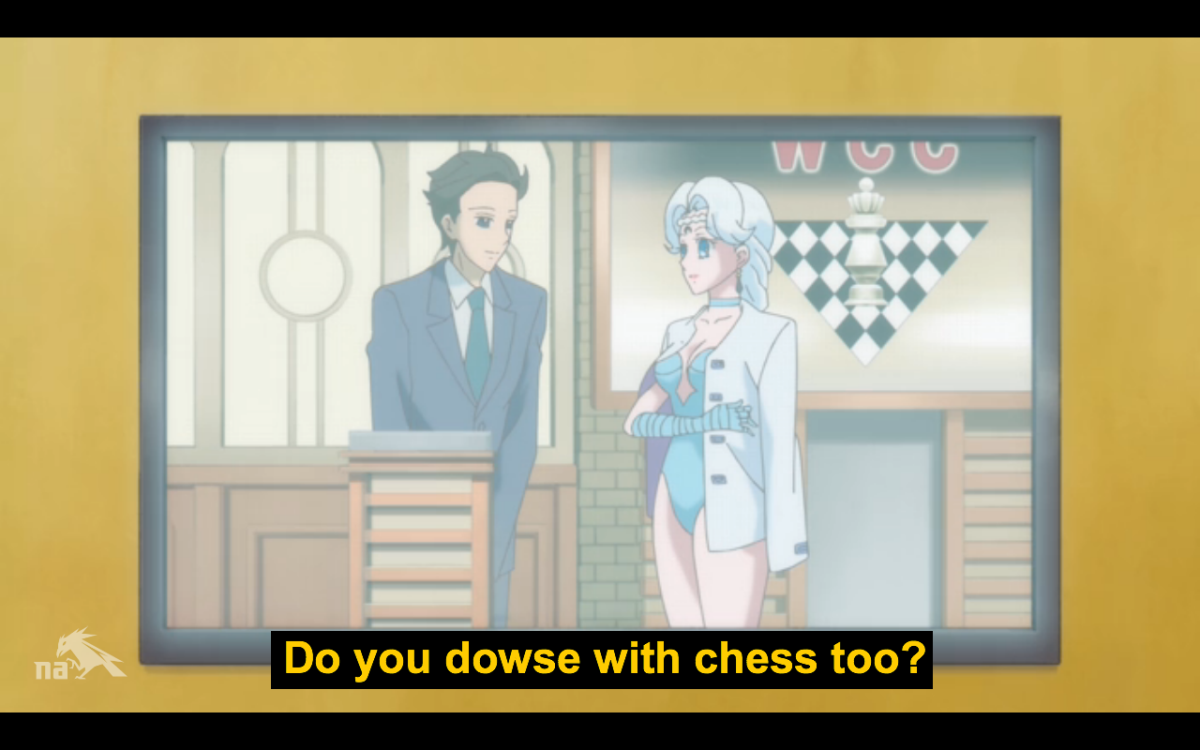 A question I never thought would be asked in any universe.

Great, so Ami and Berthier have a chess match in which the stakes are “the winner gets whatever she wants.”  That’s just lazy and boring.  If the stakes were “if Ami wins, she gets Rei back, but if she loses she’s taken captive too,” that would make sense and we could have some emotional investment.  Instead, we have no idea what the stakes are (Berthier could want all the Senshi!  Or a pony!  Or world peace!) and the only reason we care is because Ami is playing.  They could have just skipped the wager and saved themselves the time animating the exchange. 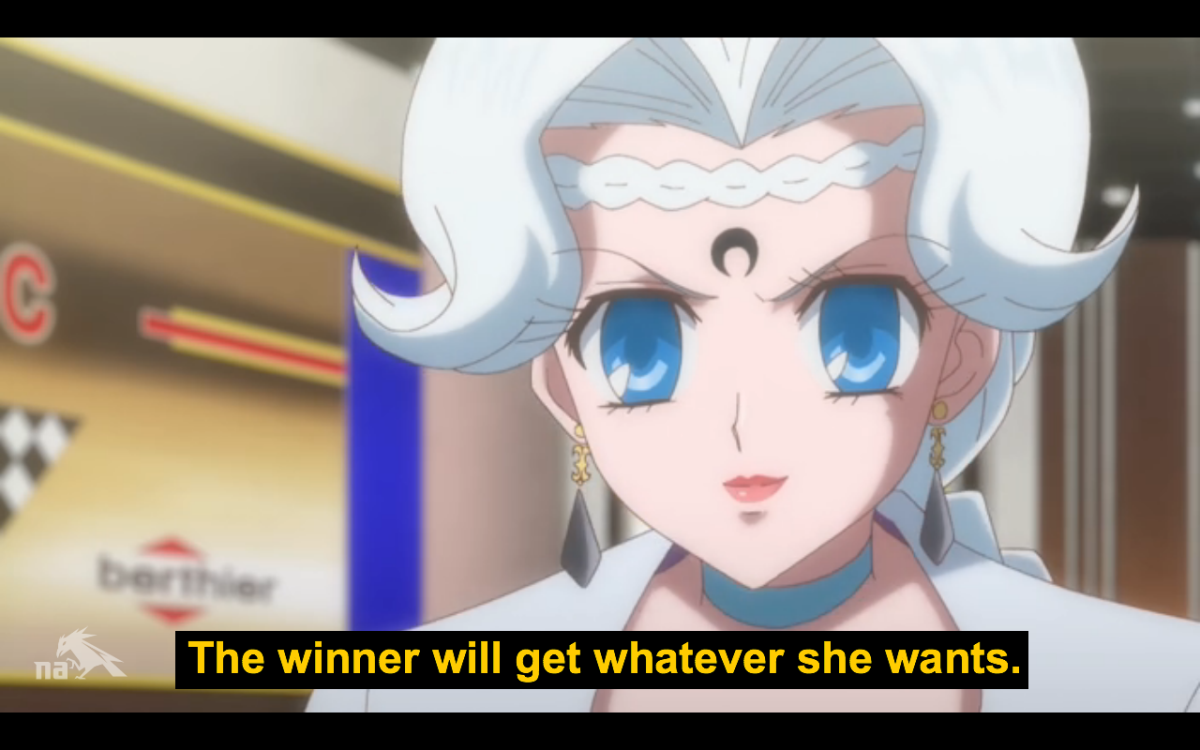 Of course, then they backtrack and do make that wager, putting Rei and Chibi-Usa up for stakes while they’re playing.  Ami is momentarily shocked that the Black Moon is after Chibi-Usa which, okay, I guess we hadn’t heard before.  Then Berthier starts in on the real psychological warfare, taunting Ami with her loneliness and her parents’ divorce, her father leaving her behind, and the loss of the Moon Kingdom.  (Chibi-Ami, though sad, is adorable.) 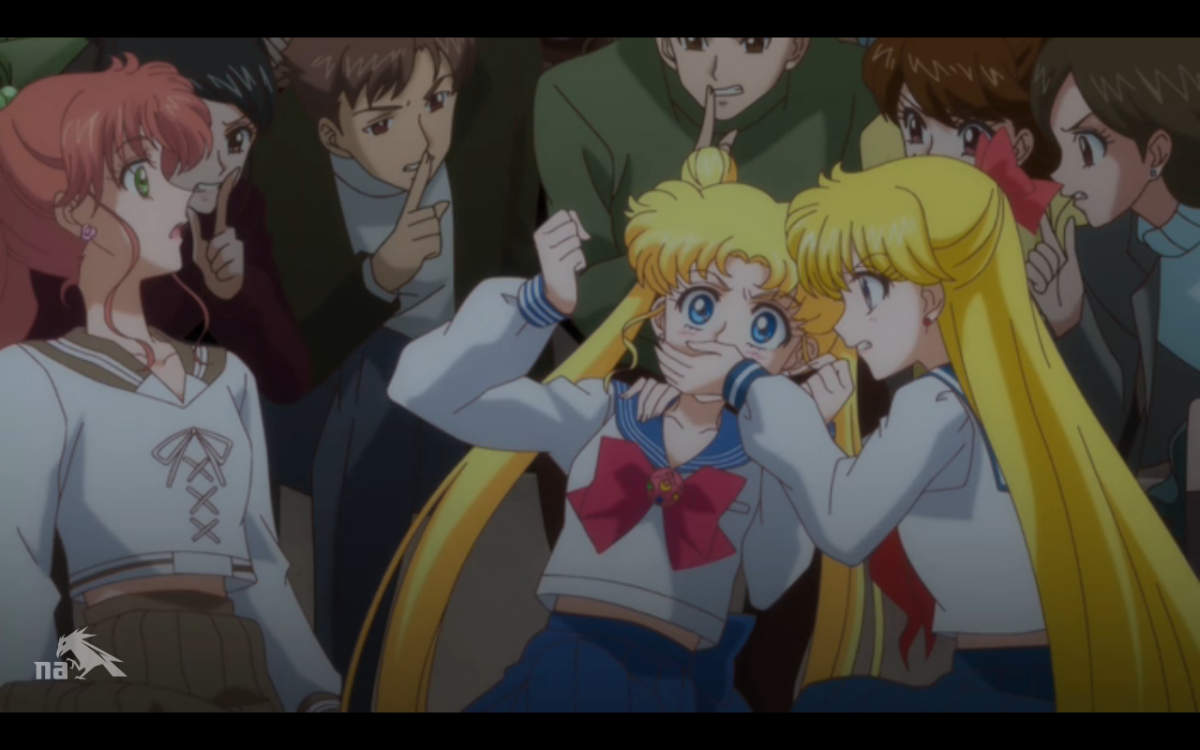 Usagi, perhaps realizing Ami’s plight or perhaps thinking she’s at a sporting event, interrupts Ami’s despair with a cheer, and dispels the darkness.  Ami recovers, and tells Berthier that just because she’s alone doesn’t mean that her happy memories of love and connection are meaningless.  I was expecting something more along the lines of “I’m never alone” or “I’ll never be alone again,” but this was more poignant and, I think, more true.  Yes, there are times we are alone, and inevitably people will leave or pass away.  But the reason it’s sad is because the connection with those people is not broken–usually a sad statement, but here, an affirmation that joy, once shared, is permanent. 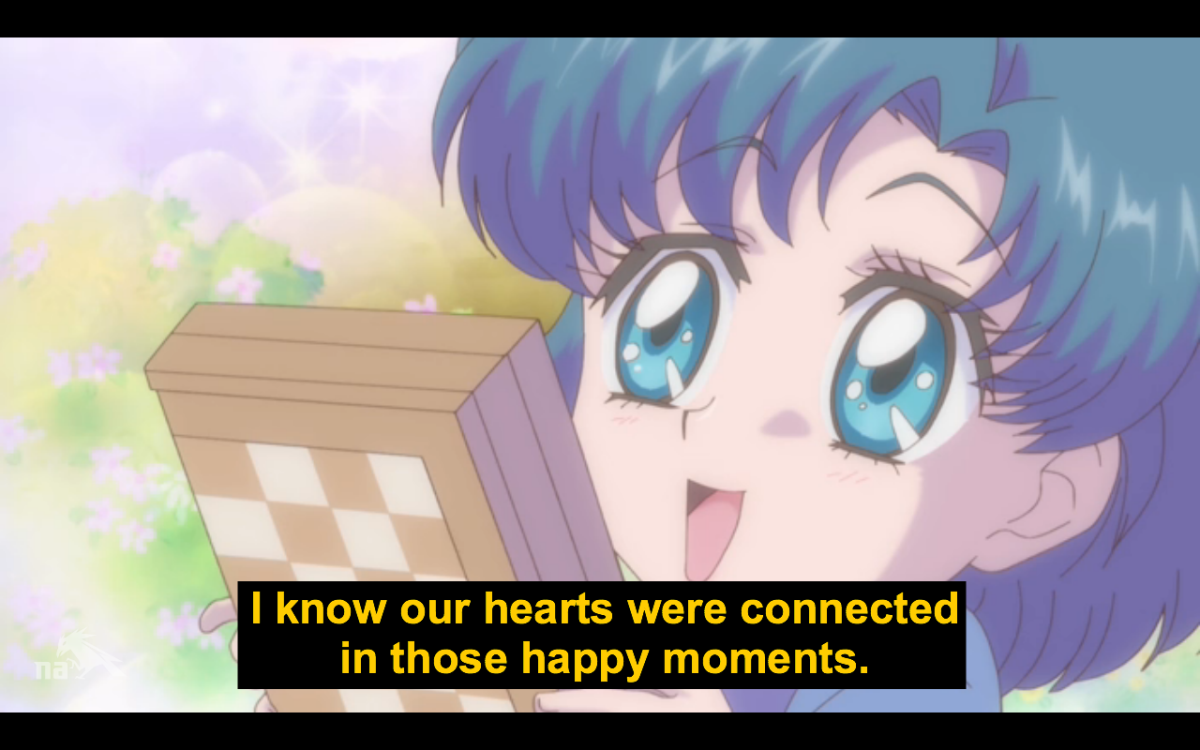 Ami defeats Berthier, and Berthier disappears from the hall.  This causes an uproar.  I have never seen enough people at a chess meet to merit an uproar, but it looks like maybe Berthier has some droids planted in the audience to ambush the other Senshi.  They get the other three pinned down, in fact, so it’s up to Mercury to fight Berthier and a separate arsenal of droids.  The droids are easy enough–a bit of snow and they’re gone (snow attack, yay!).  But Berthier cuts through Mercury’s illusions and tries to drown her.  Mercury holds on long enough for Venus and Sailor Moon to rescue her, which they almost do by destroying Berthier.  But again, Rubeus appears and snatches the still-trapped Mercury away. 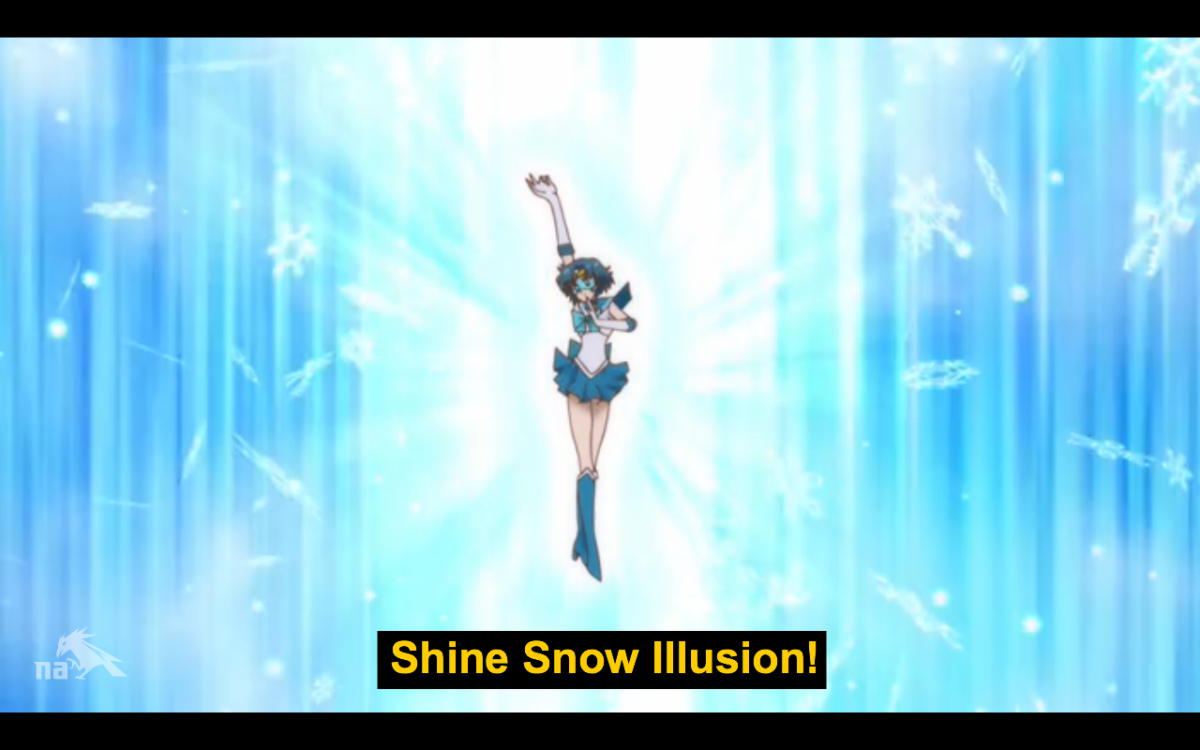 Repetition is a hallmark of the original series, so I’m not really upset by this turn of events.  What I remain upset about is the fact that yet another of the Spectre Sisters is dead.  The thing I’ve always loved about anime, manga, and Japanese animation in general is the capacity and tendency to choose redemption over destruction.  Some of the most grim, violent shows and some of the most childish, seemingly frivolous shows have chosen ambiguity and complexity over moral absolutism.  Villains get sympathetic back stories and compelling motivations, the same as the heroes, and they often have changes of heart that can show even their most terrible qualities in a good light.  Especially when I was younger, growing up on Batman and Superman, in which any redemption of “bad guys” was a ruse to get the heroes off-guard, anime seemed like a moral revelation.

The deaths of the Spectre Sisters are disappointing not only because they fail to recognize the power of that redemptive trope, but also because they likewise fail to recognize what makes black-and-white morality so appealing.  Sometimes, things really are as simple as right and wrong, and it’s really satisfying to see what’s wrong put to rights.  But Berthier hasn’t done anything overwhelmingly wrong–she’s not threatening to blow up Gotham or enslave Metropolis.  So far, she’s just said she wants Chibi-Usa, a kid nobody trusts.  I’m not saying the Senshi should hand Chibi-Usa over, I just think that given the information they have, maybe this warrants a conversation before they get down to the killing.  And it is killing.  Mercury even establishes this episode that the droids aren’t alive–but, by extension, Koan and Berthier are.  Doesn’t anyone care that they’re destroying living, sentient beings?

(Koan is more complicated, since she burned a nun alive, but do the Senshi get to be judge, jury, and executioner?  Shouldn’t we at least have a discussion about that?)

In the original, Sailor Moon’s wand was an instrument of healing.  She could cleanse people of possession by evil, transform monsters, and even redeem the Big Bads.  In Crystal, do they even know what she is, and what she’s supposed to do?