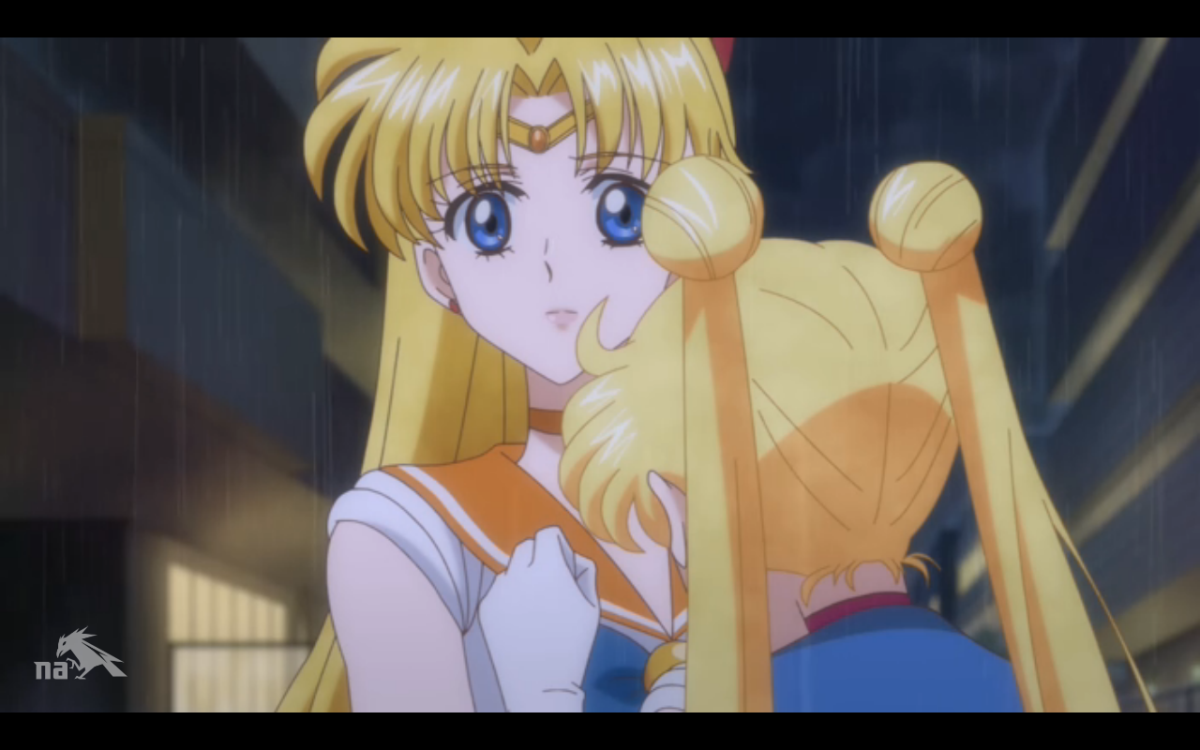 Well folks, Jupiter’s been spirited off to that great enemy base in the sky (not a euphemism, oddly enough), so now it’s just Sailor Moon and her trusty lieutenant Sailor Venus (and Mamoru). They have no leads, no inklings of the Black Moon’s ultimate plan, and no idea what to do next. It’s no surprise that Usagi bursts into tears.

But ah! What’s this? A clue conveniently dropped by an enemy without any effort required by the Senshi? Wow, I sure have faith in their ability to accomplish things now! Luna commands them to bring back Petz’s earring in a magically-fortified…petri dish. So they can do science to it or something. 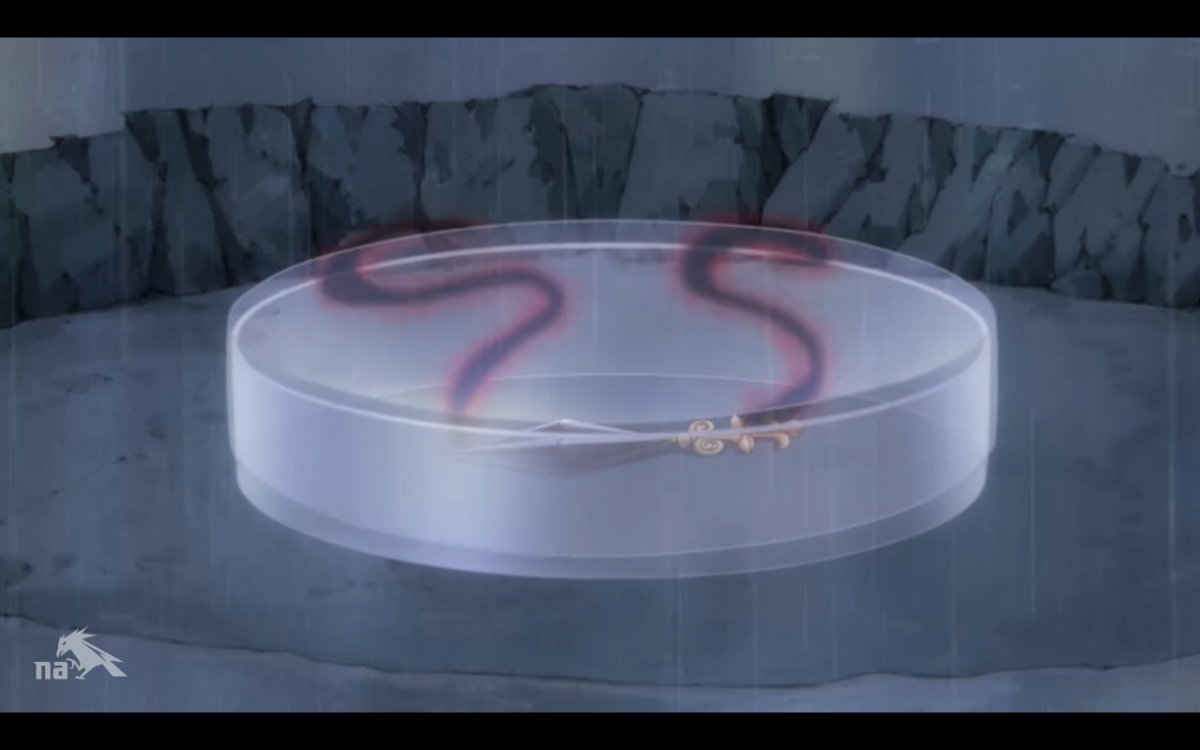 It must be “or something” because petri dish or no, they get nothing from their analysis of it back at the base. What does it suggest about the Black Moon? Are they aliens? Probably, but Luna and Artemis don’t really know. They also don’t know what to do with the crystal, how to track the missing Senshi, what to do about the Black Moon Clan, or who Chibi-Usa is. So glad we broke out the nice equipment for this.

With nothing better to do, the three go to Usagi’s home to find out once and for all whether Chibi-Usa is a friend or foe (you would think they would have followed through on this earlier…). They find her having a play date, and scare the living daylights out of her with the black crystal earring. But still, she refuses to tell them anything. Yes, we’re ten minutes in and the theme of this episode is “complete ignorance.” Did the producers think to themselves, “an uninformed audience is an interested audience”? Or, “people love having their time wasted by narrative that goes absolutely nowhere”? It’s the only explanation. 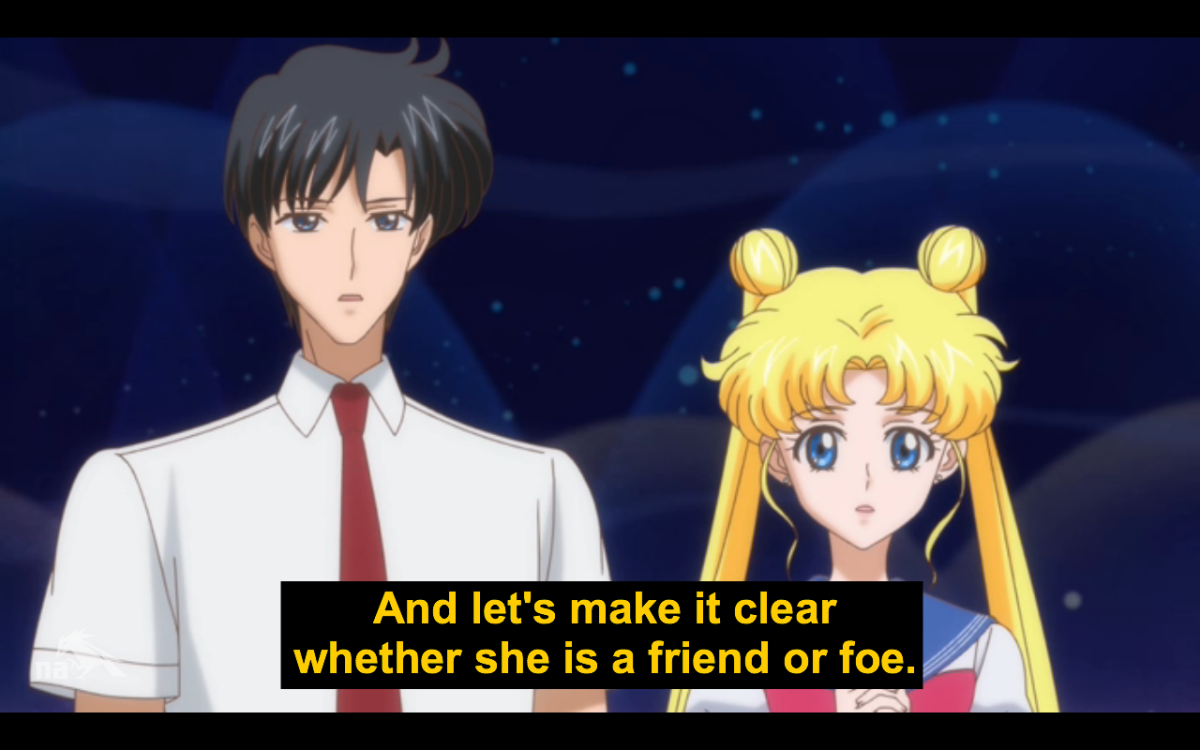 Not much more happens on planet Nemesis. Wiseman appears and tells them to destroy the Silver Crystal, the only threat to their power, which is in Rabbit’s possession. When he and Demande depart, the other siblings do discuss how they distrust Wiseman, who appeared from nowhere and seduced the prince with offers of power, including his third eye, which can entrance and subjugate anyone he turns it on.

Calaveras, meanwhile, is communing with the spirits of her departed sisters. This could have been a poignant moment in which we find sympathy for the bad guys, or at least notice the common thread of loss that binds Sailor Moon and Calaveras, both of whom have lost three of their dearest people. But no. Rubeus interrupts her with a kiss almost immediately, and they initiate the plot to go after Sailor Moon and co. yet again. 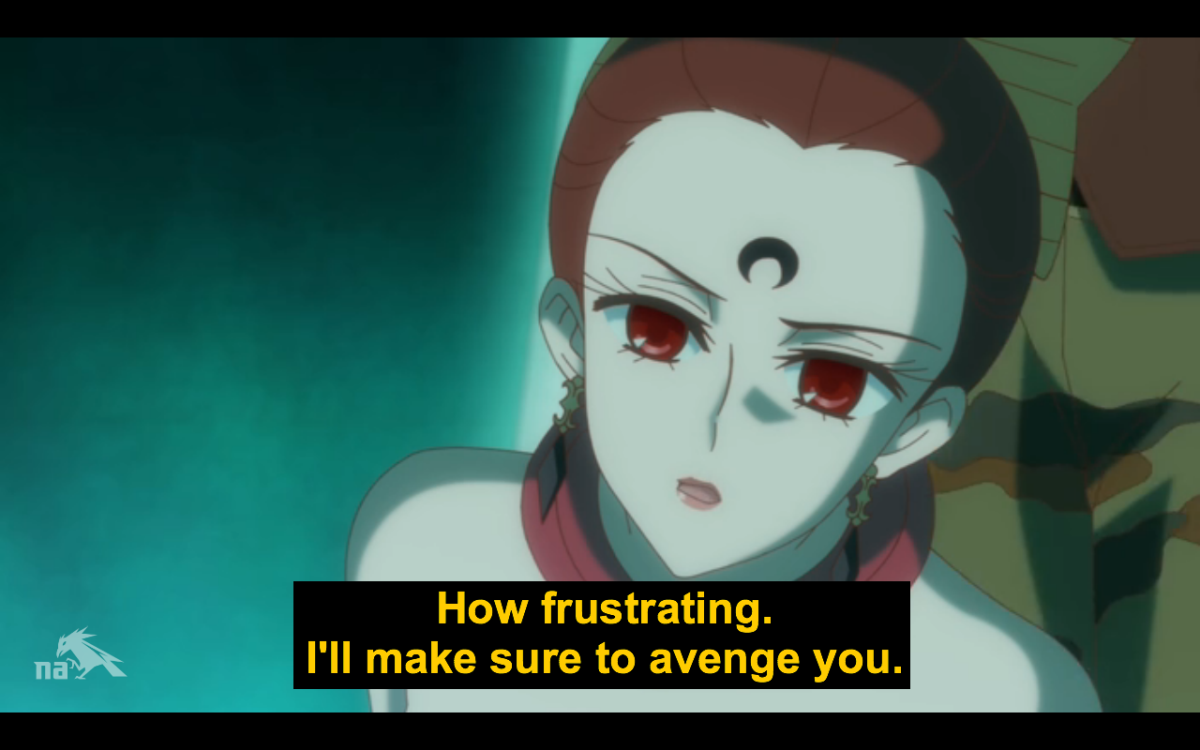 How frustrating? That’s what you say to your dead sisters?

Usagi is busy brooding her way through school until she runs into Naru-chan and Umino, the latter of whom has a DVD about channeling. A DVD?  Again with the outdated technology? Come on! Japan had viral videos before YouTube was a thing–we’ve all seen Ringu. This reliance on outdated objects to spread the Black Moon influence is obnoxious, but I can at least hope that they’re trying to say something about the way we traffic in mass-produced goods. The Senshi all have items that are very precious to them; the Black Moon Clan and other villains are careless with their power, handing out things infused with their power willy-nilly in order to increase their influence. They treat people much the same – discarding them quickly, knowing they will have more Spectre Sisters, more droids, more mental thralls to use, while the Senshi treat people as precious and beautiful, just like the pens and brooch they cherish. 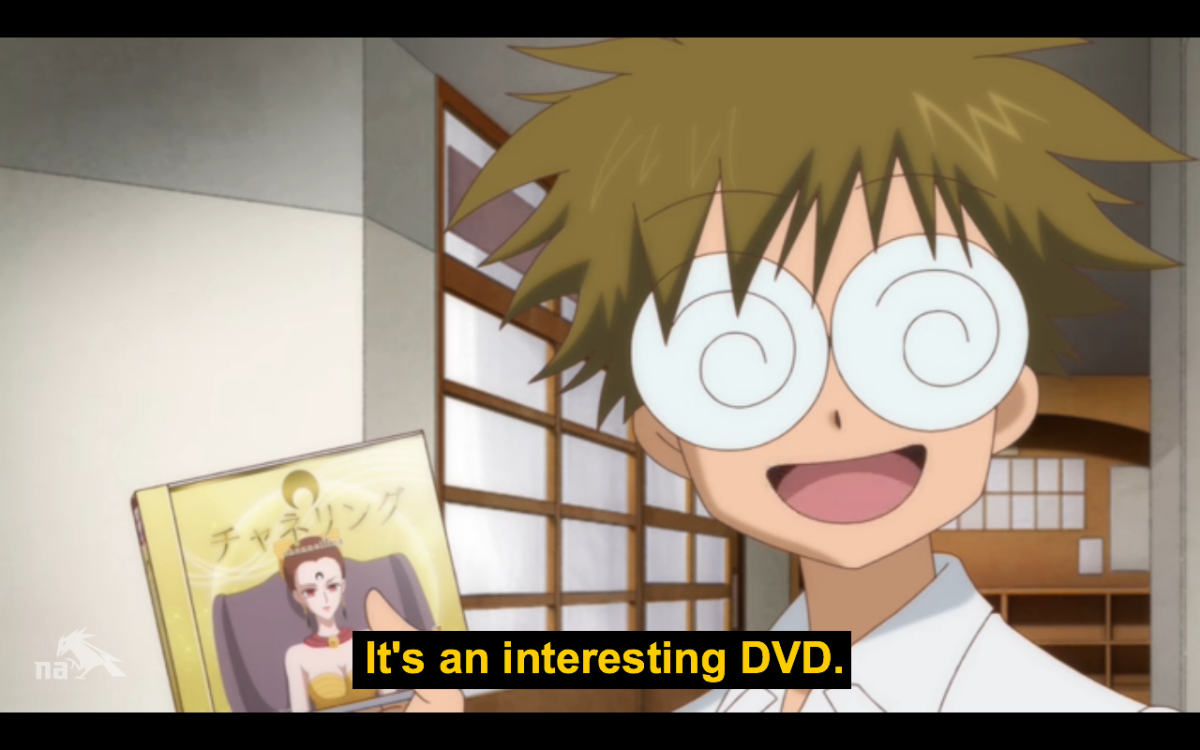 As for the DVD, it features a “spirit possession” with zero theatrics, and an invitation to a “public channeling session.” This is even more far-fetched than Berthier getting on the news and challenging a random high schooler to a chess duel. Let’s consider this from an outside perspective: a random woman appears on a DVD, claims to be receiving messages from “black moon” aliens who will be invading earth soon, and invites people to come see her “channel,” even though all she does is sit in a chair and ramble what sounds like bullshit with her eyes closed. Oh, please. Not only is it absurd, it’s also very uncomfortable in light of the Aum Shinrikyo subway attacks (a sarin gas attack carried out by devotees of a cult). I know they happened almost 20 years ago, but Sailor Moon Crystal is dealing with some very heavily inflected stuff here. I wish they would have acknowledged it.

Elsewhere, Mamoru channels the Four Knights using their gems from the last arc. They tell him that the earring is full of vague bad mojo (no shit) and that he must protect the princess, who is becoming a queen as surely as he is slowly becoming a king. He complains that he doesn’t have any powers, and his dead bros just kind of smile and poof. Great, thanks for the help, guys. 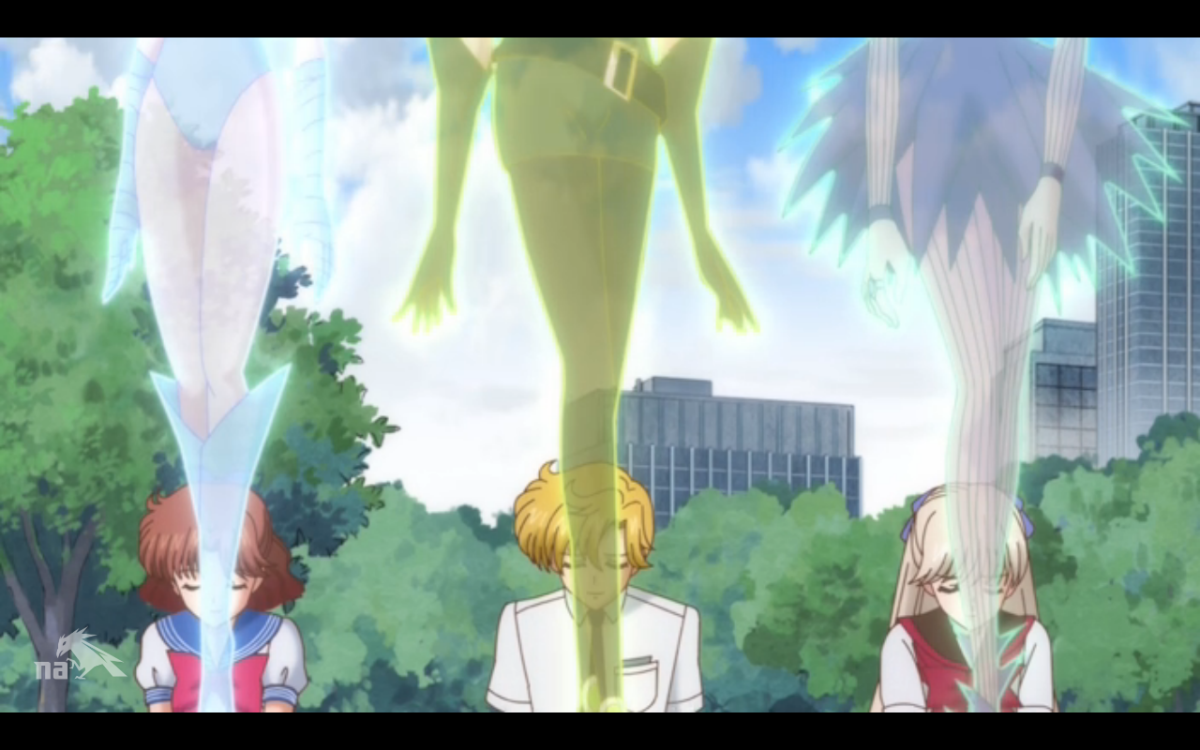 Surprising no one, Calaveras enthralls a decent group of seekers who come to see her channel. Venus and Sailor Moon should be on the scene, but Usagi finds that Chibi-Usa has stolen the Silver Crystal, and must go after her. Venus is left to confront Calaveras alone, only to find that she’s not just fighting Calaveras, but also Naru-chan, Asanuma-kun, and That Girl From Rei’s Paranormal Club. They’ve been overtaken by the spirits of the three deceased Spectre Sisters.

It would be creepy…if they did anything at all. But no, they just stand there, six silent witnesses in three bodies, as Calaveras hurls generic, brightly-colored bolts at Venus, quickly overpowering her. What a waste.

Meanwhile, Rubeus appears as a bolt from the, well, red, and tries to kill Usagi and Chibi-Usa. Tuxedo Mask appears, however, and stands between them. He has the utterly emotionless “we’re going to die” realization and man I wish the animation was better. Does this look like a man about to be incinerated with his girlfriend and a small child? 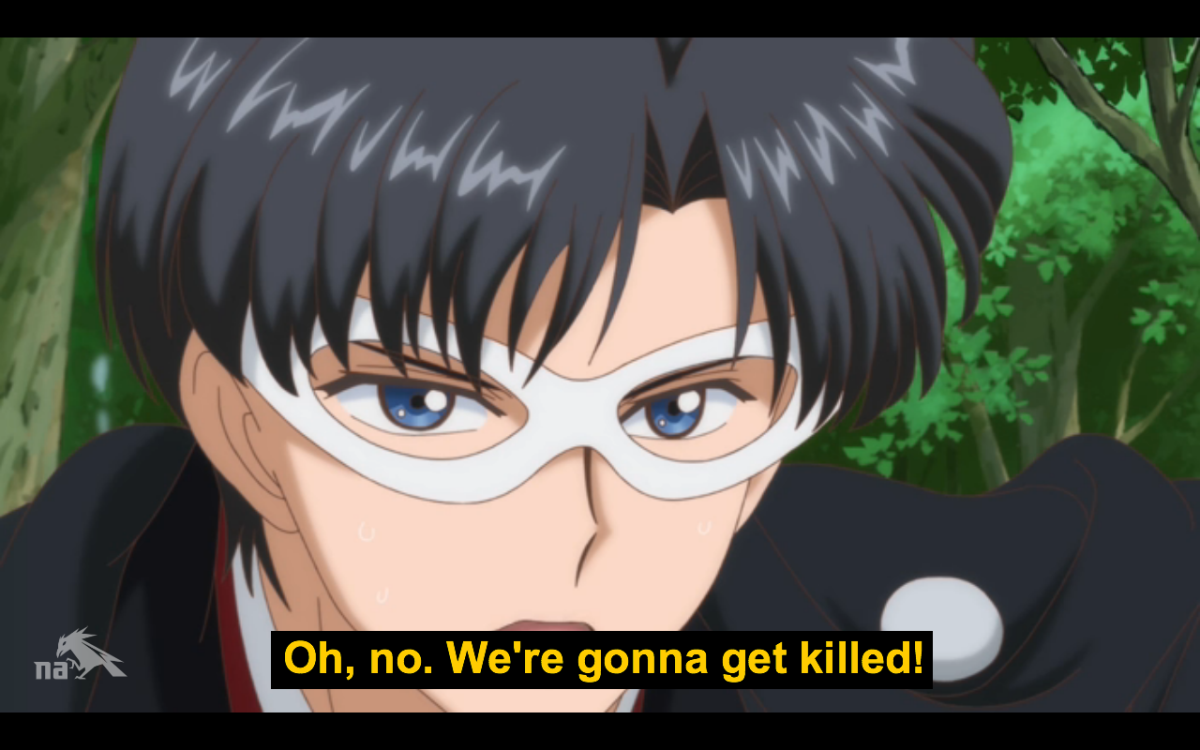 Anyway, this realization catapults him into an altered (read: slow-mo) state, and he hears a voice telling him to shout: 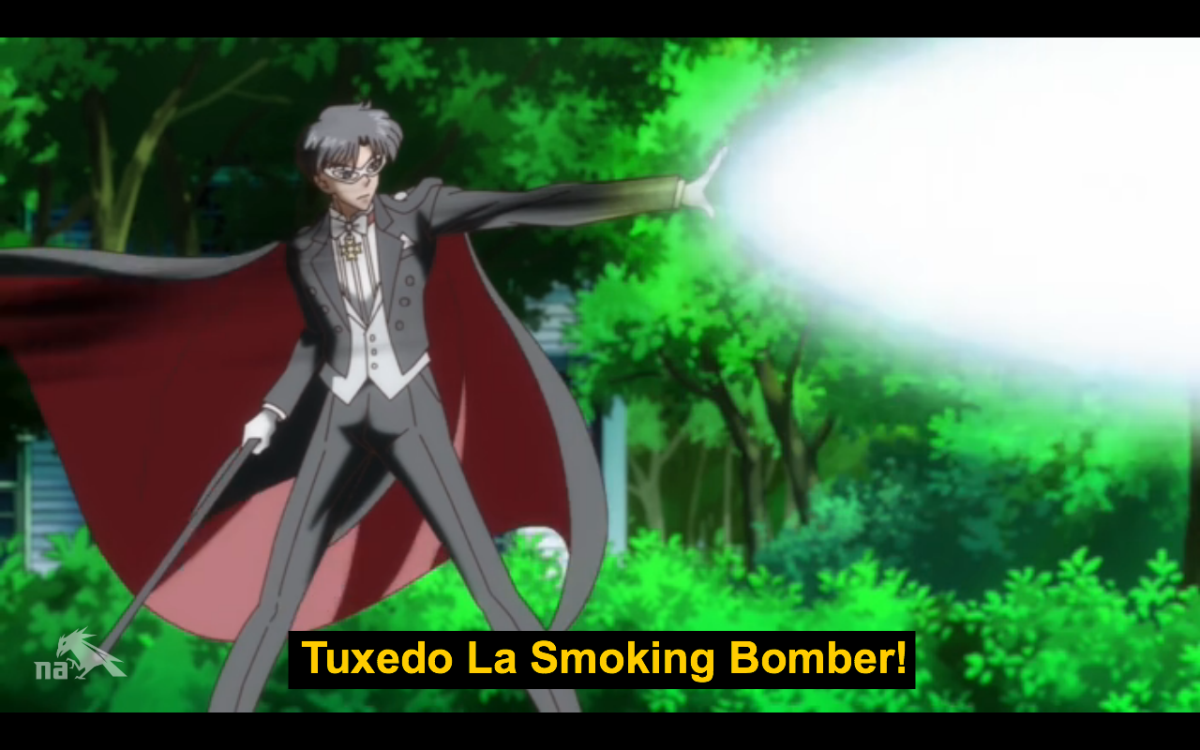 Just…just…fuck it. Whatever. Moving on. Chibi-Usa gives Usagi the brooch, and Usagi saves Venus just in time. So that’s one of four. Chibi-Usa then finally tells them that she’s from the future. End credits. Thank god that’s over.

This episode was just so boring. The majority of time was spent making vague hints about the Black Moon Clan’s plans and Chibi-Usa without coming out and saying anything, and in setting up the ludicrous premise of channeler. There was no character development–yet again, Usagi doesn’t trust Chibi-Usa but protects her at all costs–no humor, and precious little plot progress. I’m most disappointed by the wasted potential. Crystal has toned down the hijinks, but hasn’t ratcheted up the drama. This all feels very much like it’s going through the motions,and not in the cool, self-aware Buffy Summers way. Just in a way that makes me shake my head, wondering how Crystal still hasn’t found its own voice. To quote the late Calaveras, how frustrating.