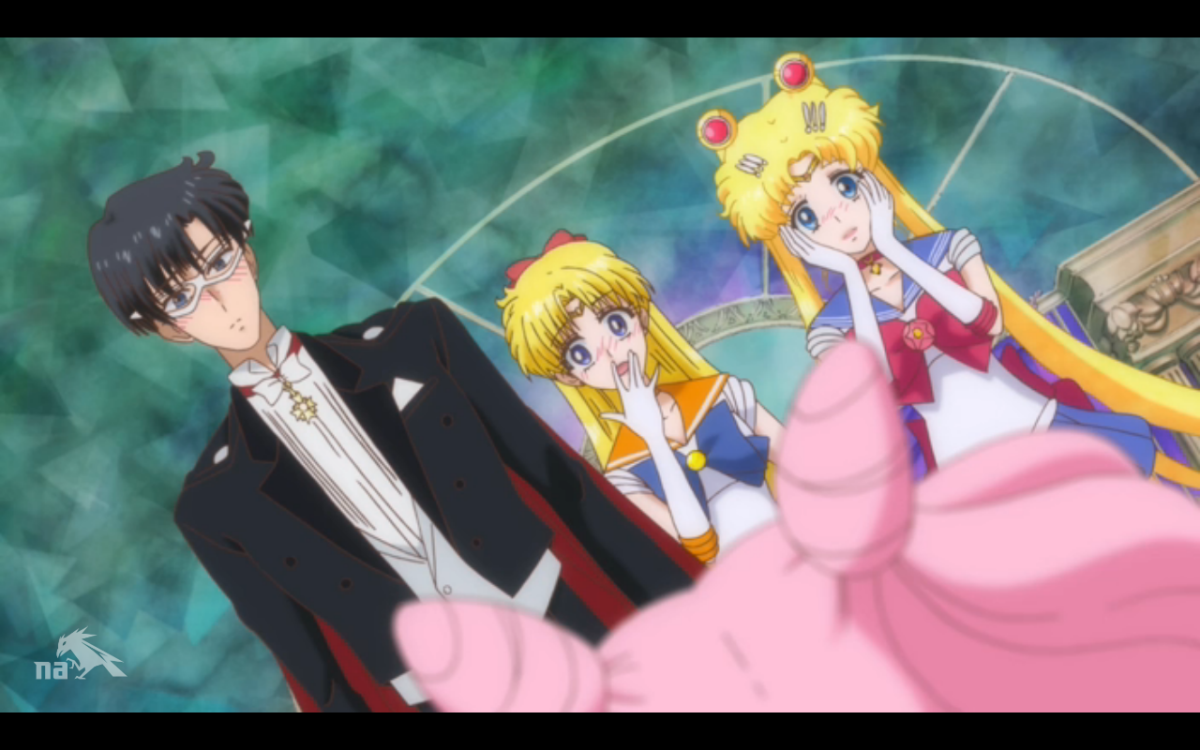 Crystal has a lot of problems (it also has qualities, I will not deny it), but for this arc in particular, I think I’ve finally figured out what the root issue is. It’s boring. And time-traveling magical girls trying to save future-paradise-Tokyo from an evil invading planet should not be boring.

I realized this because I wanted to watch an anime about a bicycle club more than I did a magical girl show. Now, Yowamushi Pedal is awesome and I’m not trying to knock it, but my particular preferences definitely lean toward magical girls, so this should be a no-brainer. Instead, I can barely drag myself to the computer for another episode of Crystal.

Crystal‘s root issue is that it’s a remake of a classic that isn’t trying to re-imagine that classic. It’s literally playing by the book, taking almost everything from the manga, including the visual style (the show’s animation is so flat because it thinks it’s still a manga, static on the page, instead of dynamic on the screen). Most of the viewership has seen the original. Many have read the manga. We know the twists; we’re not watching it to be surprised. We’re watching it for the characters and what they do. Yet the action is truncated and the characters often lack their basic traits (where is Rei’s teasing? Venus’s constant wacky sayings?). Worst of all, the story is robbed of its drama – not because we already know what’s going to happen, but because the characters seem to. Their surprise, wonderment, and struggle are all rushed in service of a plot we already know; instead of drawing them out (like in the original) to allow us to spend time with people we already love. Their triumphs and failures are shallow because of it.

What I’m saying is, Crystal has no heart.

And with that utterly anime-esque comment, she dropped the mic and rode off into the sunset. 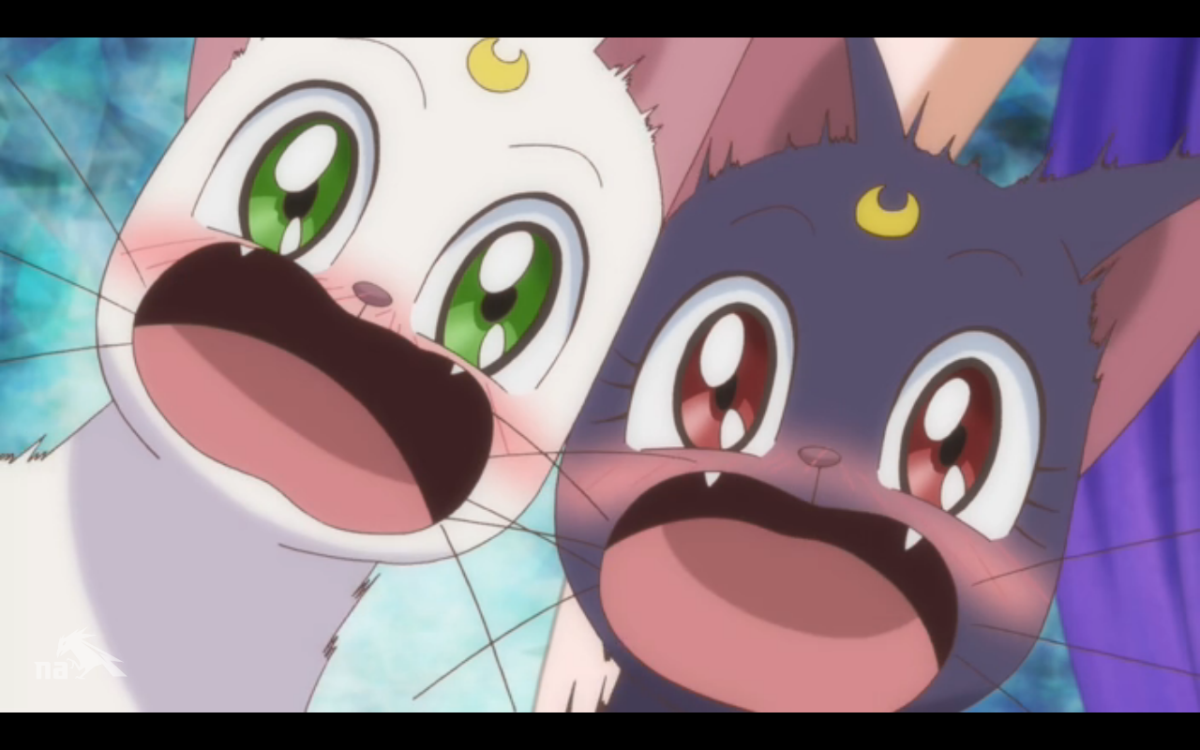 So Tuxedo Mask’s future self is projecting his spirit to guide the Senshi even though his body is trapped somewhere in Crystal Tokyo. He’s Chibi-Usa’s dad, Neo-Queen Serenity is her mom, and they’re all future versions of the current Senshi, obvi. Also obvi, the Senshi and Mamoru have incredibly un-dramatic levels of shock. Their mouths open a little bit. Their eyes get a little bigger. But with already huge eyes and comically small mouths, their shock is underwhelming. Seriously, the cats have more of a reaction than they do when they learn that Diana is their daughter. 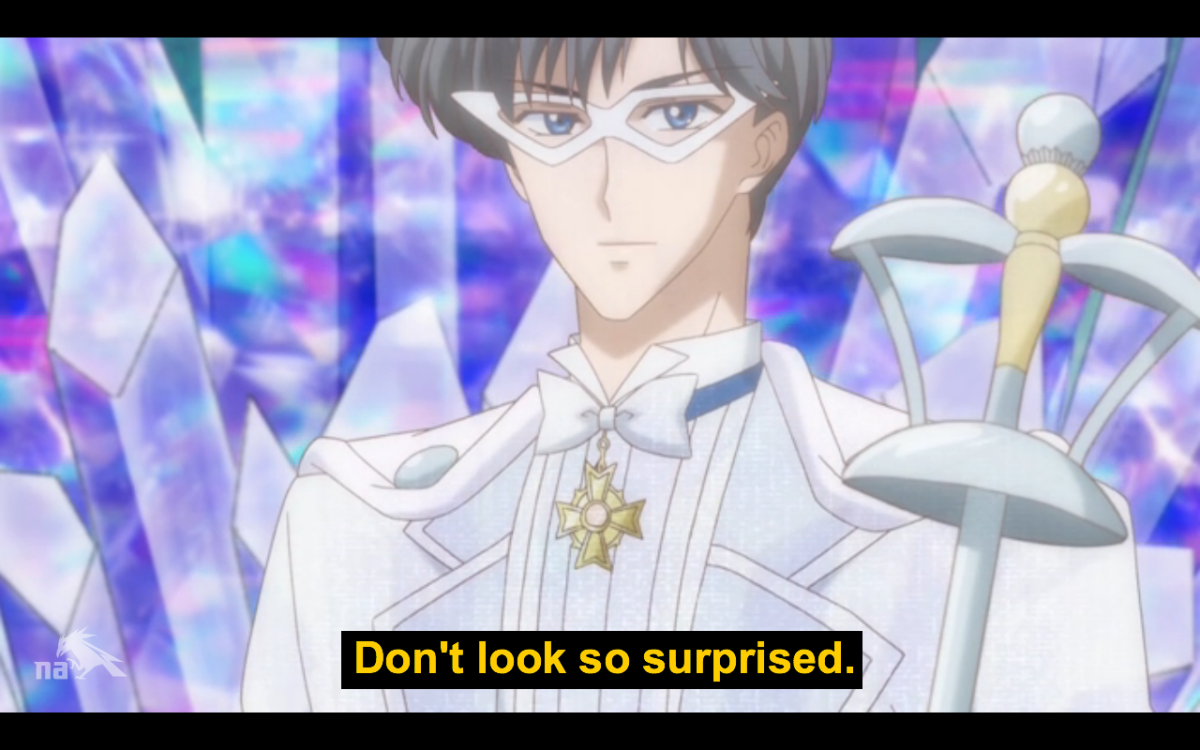 The show takes a massive info-dump, explaining why everybody is so long-lived, the origins of the Crystal Empire, and so on. The thing I’m most curious about is something they never explain: how did Japan, a thriving democracy that already has a royal family unrelated to Usagi, turned into an absolute monarchy in which they crowned a princess from another planet/some girl from Juban their ruler at age 22? (That means Usagi has 7-8 years to shape up.) Also, humanity’s dream was long life? I would think that that would only increase overpopulation issues, especially if everyone stopped aging at the fertile age of 22 and there was no corollary power of the Silver Crystal to enable sensible family planning (Japan’s track record on family planning has some problems that I will not get into here).

I know they’re trying to answer questions that the original left vague, but this really raises more concerns than it lays to rest. 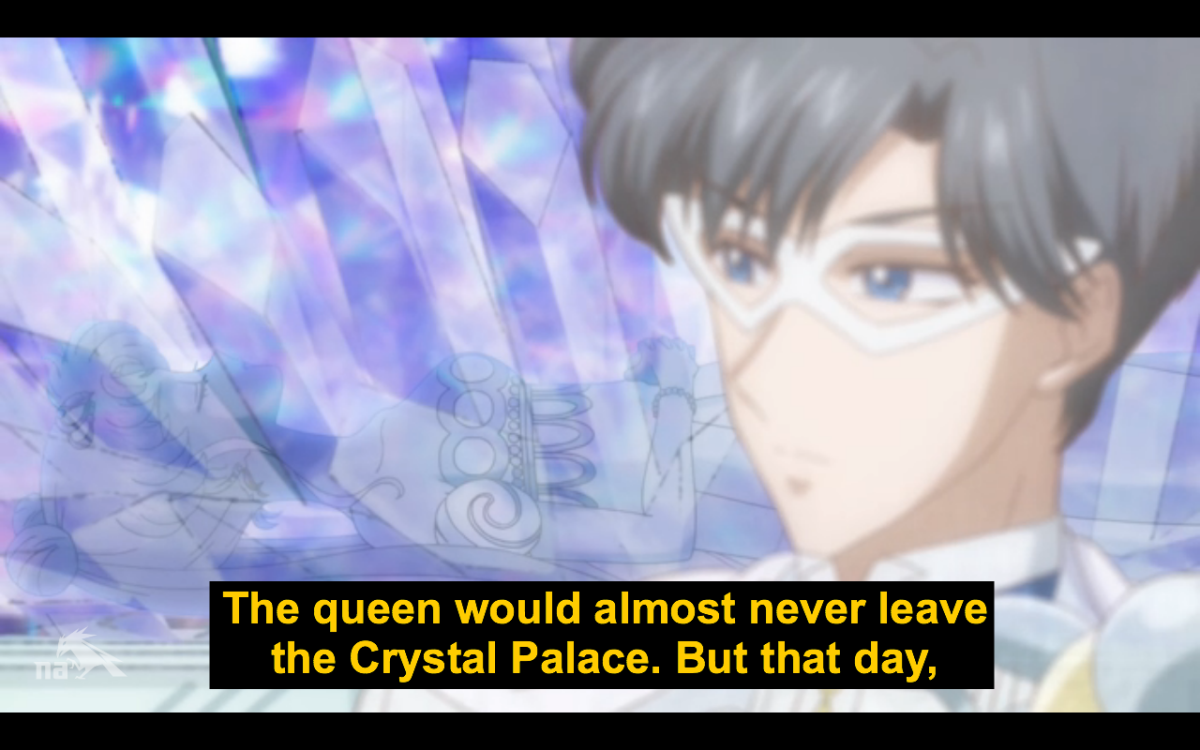 Also, the history of why you should never leave your house. Stay inside with Netflix or the world will end!

Venus, thankfully cutting through the lackluster history lesson to the matter at hand, asks about the Black Moon. King Endymion takes them to a control room, where he is apparently able to affect electricity enough to continue spewing info. Nemesis is a strange planet to which a single criminal was banished (I guess we don’t have prisons on earth anymore, so we send people to permanent solitary isolation on energy-rich but desolate space objects? Why not just kill the guy? That seems kinder). Later, dissidents called the Black Moon joined him on Nemesis. They were mass murderers. Wait, what?
Again, Crystal is removing all ambiguity. First they killed the Spectre Sisters, and now the hints of nobility and anti-hero potential are stripped from the Black Moon, making them one-dimensional (heh) manifestations of evil.

The info overload is cut mercifully…well, not short, but medium, at least…by Usagi beginning to disappear. Apparently the same person from a different time shouldn’t exist so close to herself from the future. Whatever, I’ll buy it. They do a lot of telling-not-showing before they leave to go back to the past, with the two Mamorus remarking straight-facedly on how weird it is to be with their past/future selves. YOU THINK!? God, show some cringing, or hesitation, or nerves, or something other than bland affability. 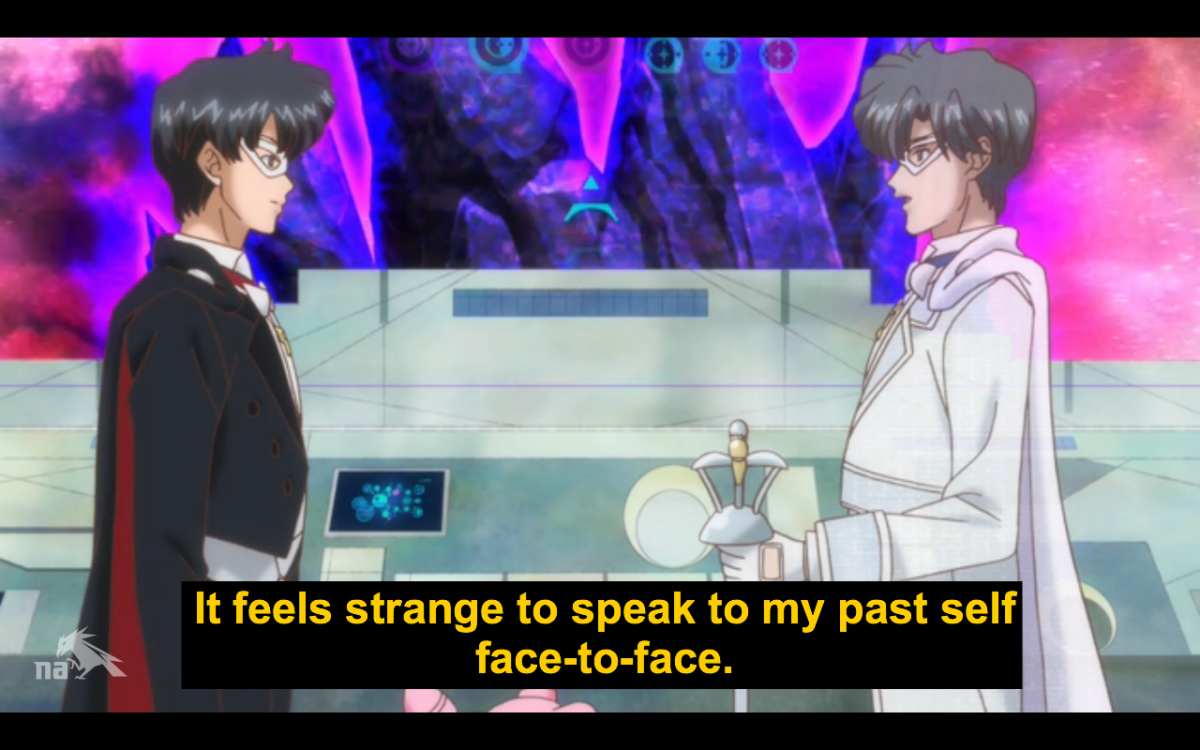 They go back to meet up with Sailor Pluto, daughter of Kronos and apparently immortal guardian. There is some nice symmetry to the thought of the eternally dependable guardian and the eternally treacherous Death Phantom. Again, the theme of loneliness emerges as a necessary consequence for those with power, but also something that Usagi is specially empowered to overcome. With just her friendly “nice to meet you!” you can tell how she overcomes a lot of Sailor Pluto’s resistance. Unlike King Endymion, who treats Pluto as any king might treat a vassal, making a (respectful) order, Usagi treats her as a new friend. See, now that’s what I’ve been looking for. Good job, Crystal!

Naturally, Crystal spoils things two minutes later, when Usagi runs off crying after Mamoru insists on caring for Chibi-Usa. That weird “you prefer her over me” comment rears its ugly head again. Why, now that she knows Chibi-Usa is her daughter, is she still jealous? They’re really contriving some drama here, and they’re doing it for the wrong person. Yeah, Usagi is immature, but the climax of the original depended on Chibi-Usa’s youthful misunderstanding, willfulness, and childishness. By this point, Usagi the Elder should be doing some serious growing up. 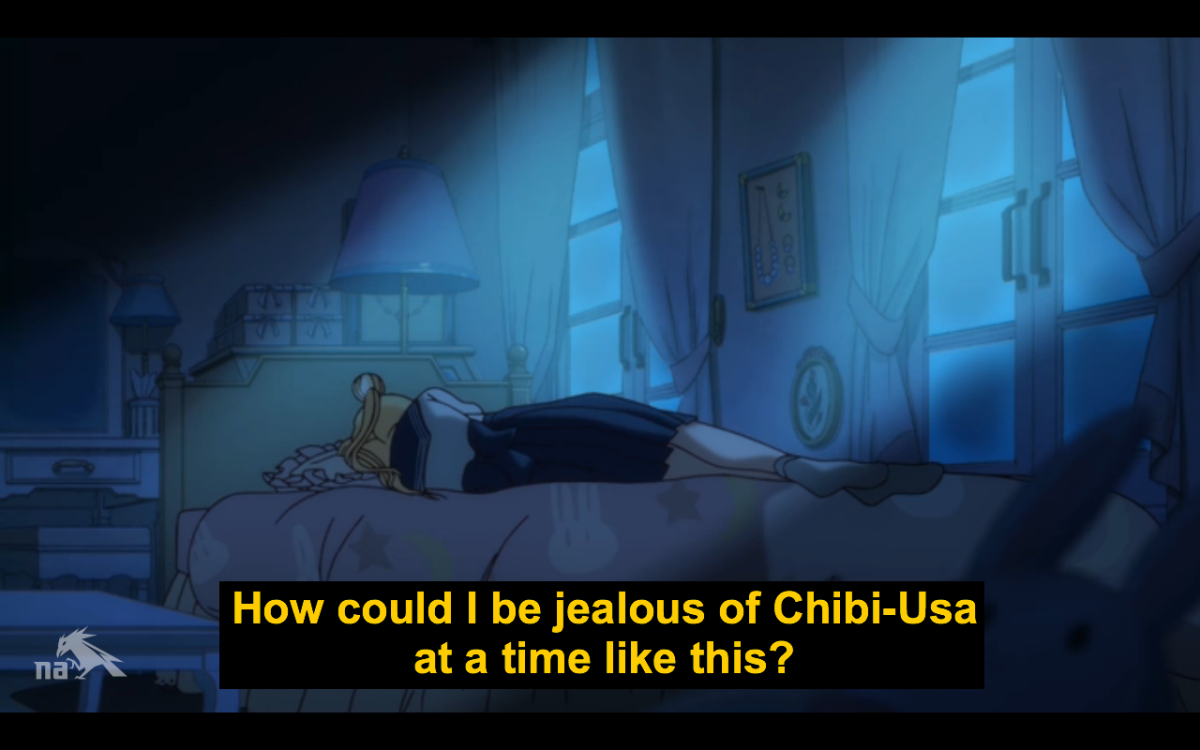 Fortunately, she at least knows it’s wrong to be jealous, and her reason is at least semi-legit. She wants Mamoru to have asked her to protect Chibi-Usa together. That’s fair, parents should be equal. But why she couldn’t have voiced that concern instead of running off in tears…well, I blame the writers.
Chibi-Usa runs off in the middle of the night to travel through time again, and you know, if my mother were jealous of my father’s attention, I’d want to GTFO too. She goes wandering through the biers of her father and friends, the future-Seneshi, and to the crystal entombment of her mother. Again, the loneliness is a powerful emotional tool, one I wish the writers and animators would expound upon.

Just across the way, Esmeraude has a new plan and a new power, courtesy of Wiseman: her arms are now hideous. The animation is honestly pretty unsettling, but ultimately her confrontation with Chibi-Usa doesn’t do a whole lot with them, other than have them distend to an unnatural length to grab people. She does suck energy with them, but, well, eh. In the original she turned into a dragon. This is…not that. 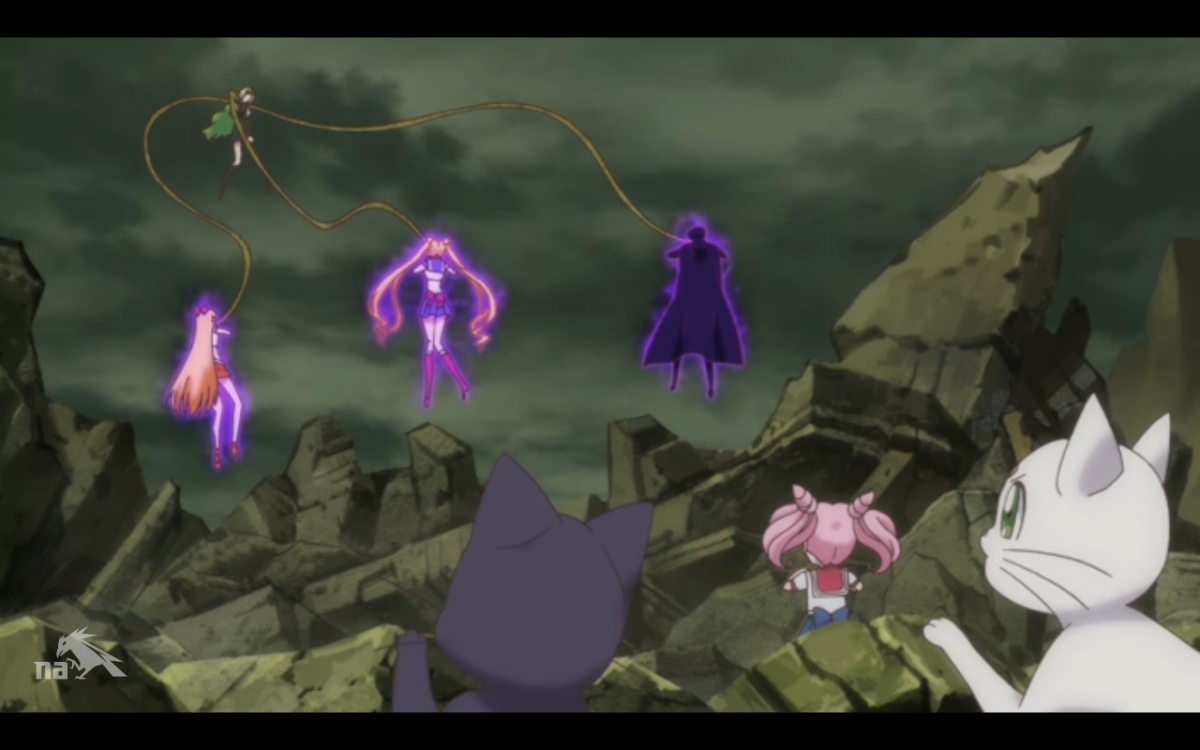 Venus gets a good hit in, which only reminded me that it’s been a remarkably huge number of episodes since we’ve even seen the other Senshi. Not a great way to build viewership, since most of us identify strongly with those missing Senshi, guys! But yeah, Venus smacks Esmeraude, Sailor Moon’s attack fails again, and Esmeraude grabs them all, generating a third arm from…somewhere. Very Elfen Lied, guys, but not all that thrilling. The battle barely lasts a full minute.

Fortunately, they have a man to save them. King Endymion joins his spirit with Tuxedo Mask, and they complete their ridiculous attack to blow Esmeraude into oblivion. Great. Another woman dies, and not as a result of her own blind jealousy, treachery, and the attack of empowered women, but because a couple of guys hit her. Boy oh boy, I sure do love how Crystal is undermining the feminist themes of the original by rendering Sailor Moon powerless! 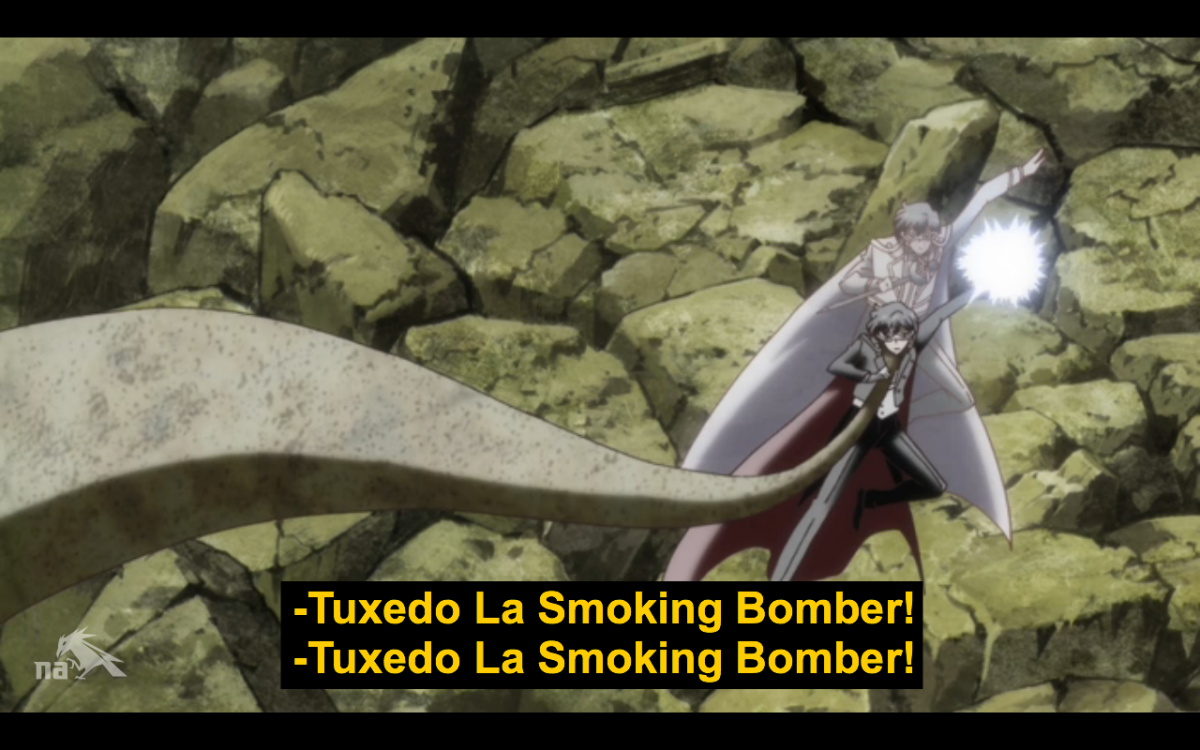 Prince Demande and Wiseman, unfazed by Esmeraude’s death, appear and make vague threats. Then Demande uses his creepy third eye to stun and capture Sailor Moon, and the episode ends.

You know, in the original, the whole exchange between Demande and Sailor Moon was a potent, frightening, and ultimately empowering depiction of male sexual coercion, female resistance, and compassion for one’s enemies. And I just know Crystal’s going to screw it up. So at this point I’m not only reluctant to view the next episode because I fear the boredom, I also now fear the message. I wish I could also go back in time, shake the creators, scream “you’re better than this! I know you can do better!” and make sure they don’t. I guess we’ll see if I succeeded at that next time.