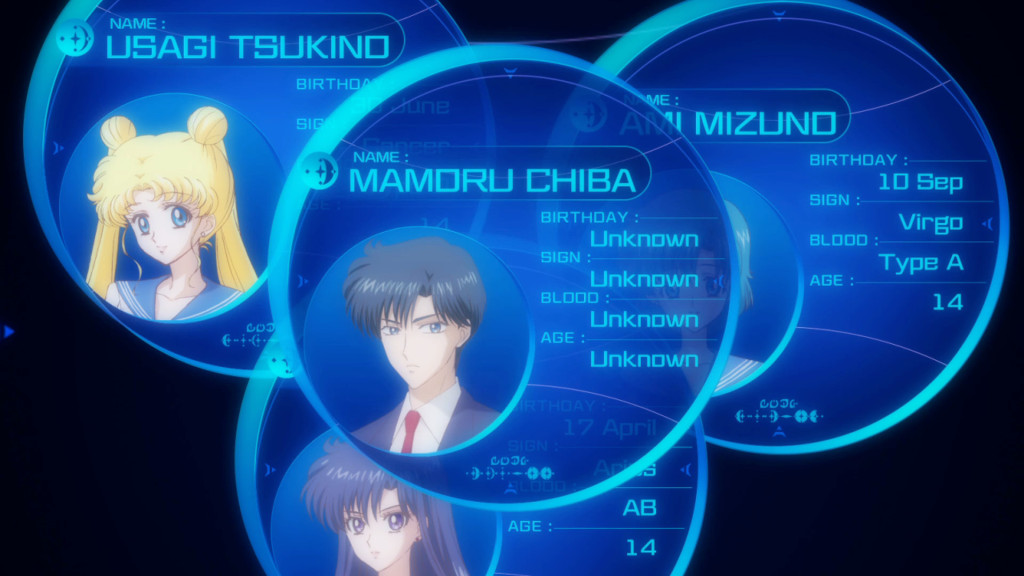 This week, according to Luna, Mamoru is a Suspicious Character!

Yes. Thank you. Somebody finally noticed.

Of course, the characters aren’t as gross as I am, and they begin to discuss their roles. Not sure why we have to get a recap of who everybody is, but it leads into a very welcome info dump about finding the unknown princess, who apparently has the Silver Crystal in her possession. When all the Senshi are awakened, the princess will be able to emerge. This is slightly different from the original, and I think it’s helpful to have it laid out like this. It places even more importance on the Senshi and their bonds. 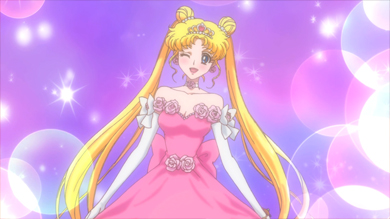 Usagi ain’t give a damn about that, and just wants to play her video games and go to the fancy event for the Princess D (heh). She even gets her way! She tells the pen to transform her into a princess, which is just heaps of irony if you know anything about where this story is headed, so she can meet this Princess D (snicker). The transformation pen is a jerk–why else would it put her in that hideous two-tier ruffle tea-length dress with bow-topped opera gloves?–but it technically does as she asks (see: tiara), and soon she and Rei and Ami are off to the embassy, also wearing tiaras. 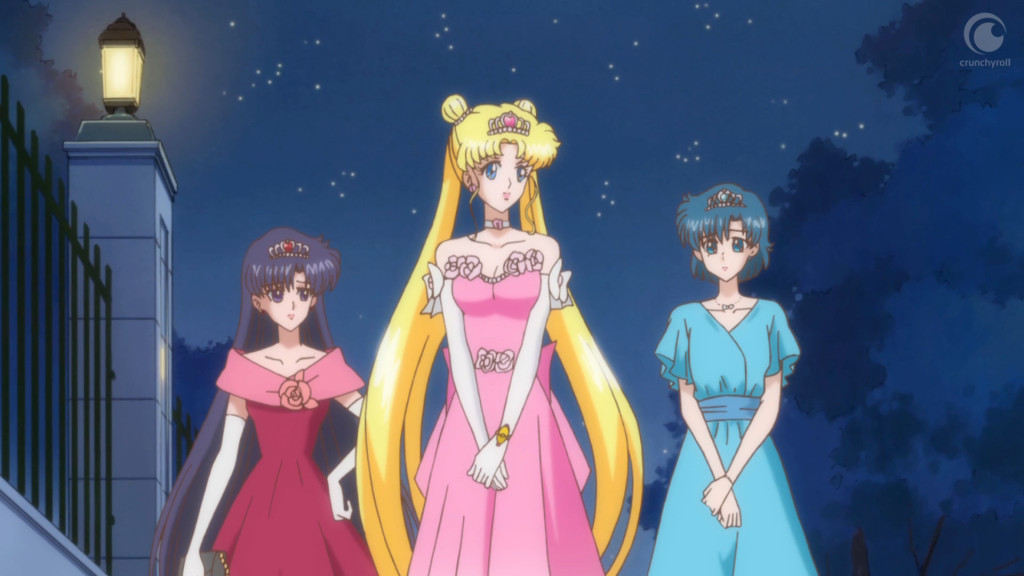 Despite the earlier part of the episode emphasizing heavy police presence and security checks, the embassy security is hella lax, and they get in just because they’re dressed up. I don’t know about you, but I’m definitely looking forward to bringing my tiara to Japan.

Also using fancy clothes to bypass security is Tuxedo Mask, who finds Usagi in a quiet, rather lonely moment and asks her to dance. It’s almost sweet. He ruins it almost immediately when she tries to talk with him, and he shushes her by putting his finger over her lips. Swoon. STFU: the height of romance! Then, he leaves her in the middle of the flood in the middle of a dance for no reason. So debonair! I’d definitely feel all warm, Usagi, but it wouldn’t be from blushing. It’d be from having set him on fire. 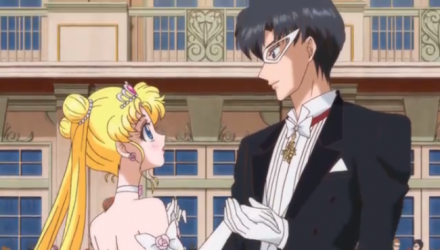 While Usagi is mooning (heh) over the vanished Tuxedo Mask, Rei and Ami are investigating the evil aura Rei sensed around Princess D and then around the princess’s…I don’t know, her attaché? Assistant? D’s like 10, so it’s possible the woman is her nanny. Whatever her title, she is creepy in the ten seconds she gets to intimidate the young princess before Ami and Rei bust the door open. Nanny-Nepherite infects the girl with some kind of evil spirit before they can stop him, however, and the princess takes the “secret treasure” and flees.

Usagi stops her mid-getaway, at least for a moment, but then Princess D knocks her from the balcony. Fortunately, Tuxedo Mask grabs her. They hang for a minute, and then Tuxedo Mask loses his grip, and they both fall. Way to be a hero, dude. Fortunately, Luna tells her to use her pen, and the pen turns into an umbrella. An umbrella. All right, fine. Physics-defying though it may be, it is a magic umbrella, so I’ll give it a pass. 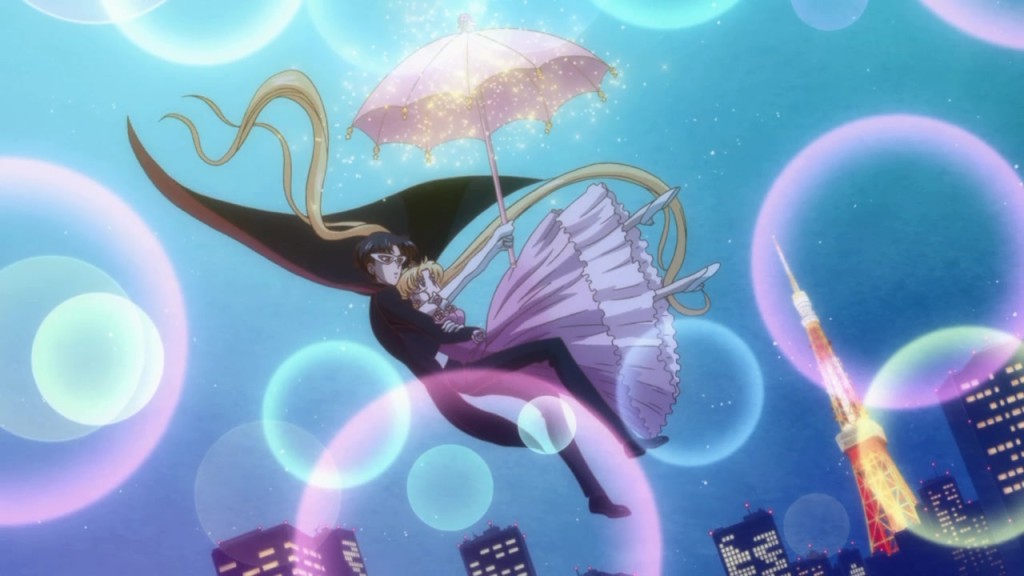 What I won’t let pass is that, after Tuxedo Mask graciously states the obvious that Usagi saved him from the fall, he does not mention the magic pen at all. Did he think she pulled a full-sized umbrella out of her bodice? Because even if he did, that would still require magic. He’s not even a little curious? No? Man, that Past-Life Romance Awakening does a doozy on your basic reasoning skills.

I hate that this whole show has been one big (heh) double-entendre. 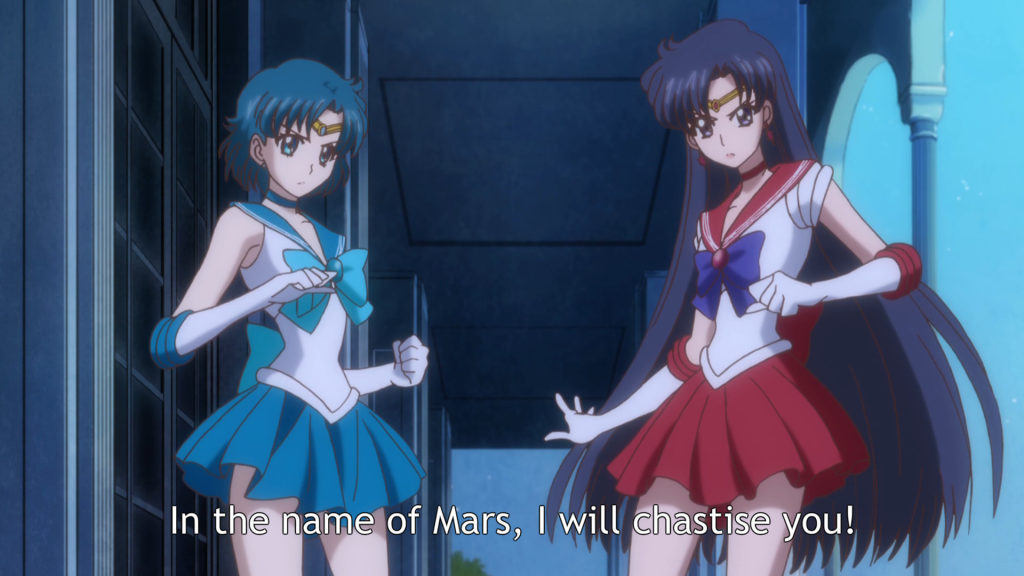 He runs off again, naturally, and Usagi is left to transform in anonymity. Even the memory of their togetherness is enough to power up her transformation, though, and she gets a new tiara with a little crown on it. You ask me, that’s a much better consolation prize than Tuxedo Mask was in the first place. It absorbs and then blasts moonlight! Badass. She banishes Nephrite from Princess D, and after he and the rest of the Four Kings of the Dark Kingdom do a little taunting and a little plot-revealing, they depart and all is restored.

Almost all. The princess is left without her glasses, and the Senshi’s first thought is “great, let’s run?” You’re just going to leave her there, unable to see? I guess that’s one way to escape notice, but it’s not like the police or Japan as a whole seem to have a problem with you helping out. In fact, it doesn’t seem like Japan has a problem with much, given that a possessed little girl turning the entire room dark and sapping everyone’s energy is not a big enough deal to merit evacuation. They even manage to complete the purpose of the night by having Princess D (apparently somebody did find her, and her glasses too) show everyone the “secret treasure.” No, it’s nothing dirty. It’s just a replica of her made with a single, giant diamond. 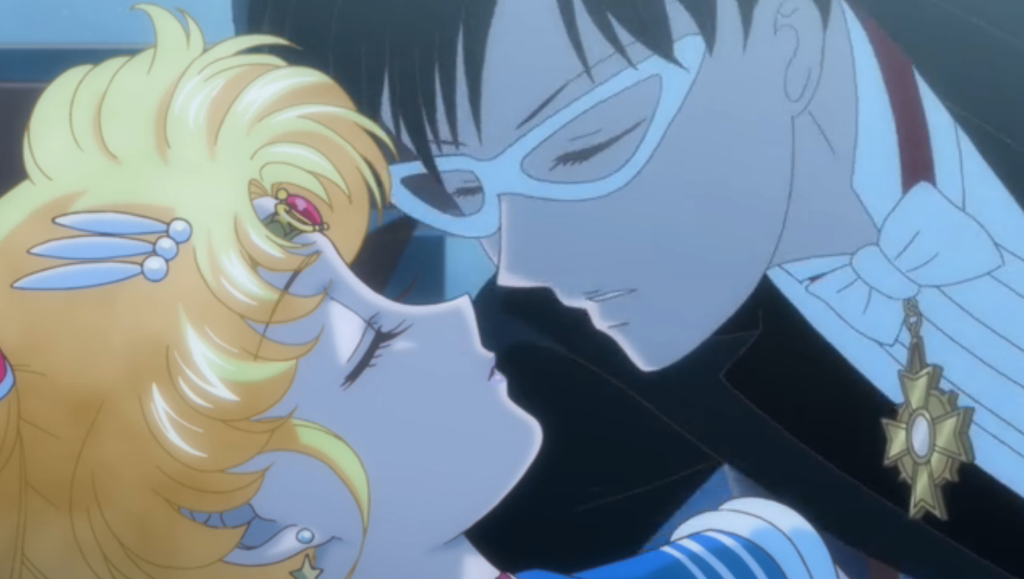 After all this, Usagi manages to fall asleep in her Senshi uniform on a random bench at the embassy (?), and Tuxedo Mask comes over and begins kissing her. WHAT THE FUCK? That is not okay! Don’t kiss sleeping people you don’t know! Luna interrupts him THANK GOD and asks him what the hell he’s doing. He pretends to be all mysterious and implies he might be their enemy, and then whisks himself away. Tuxedo Mask, you are disgusting, and you are hereby re-named Terrible Molester. I officially hate you.

This week’s takeaway was tiara>boyfriend. I agree wholeheartedly.

Next week, the storm arrives. They are definitely giving me high hopes for the introduction of Jupiter.