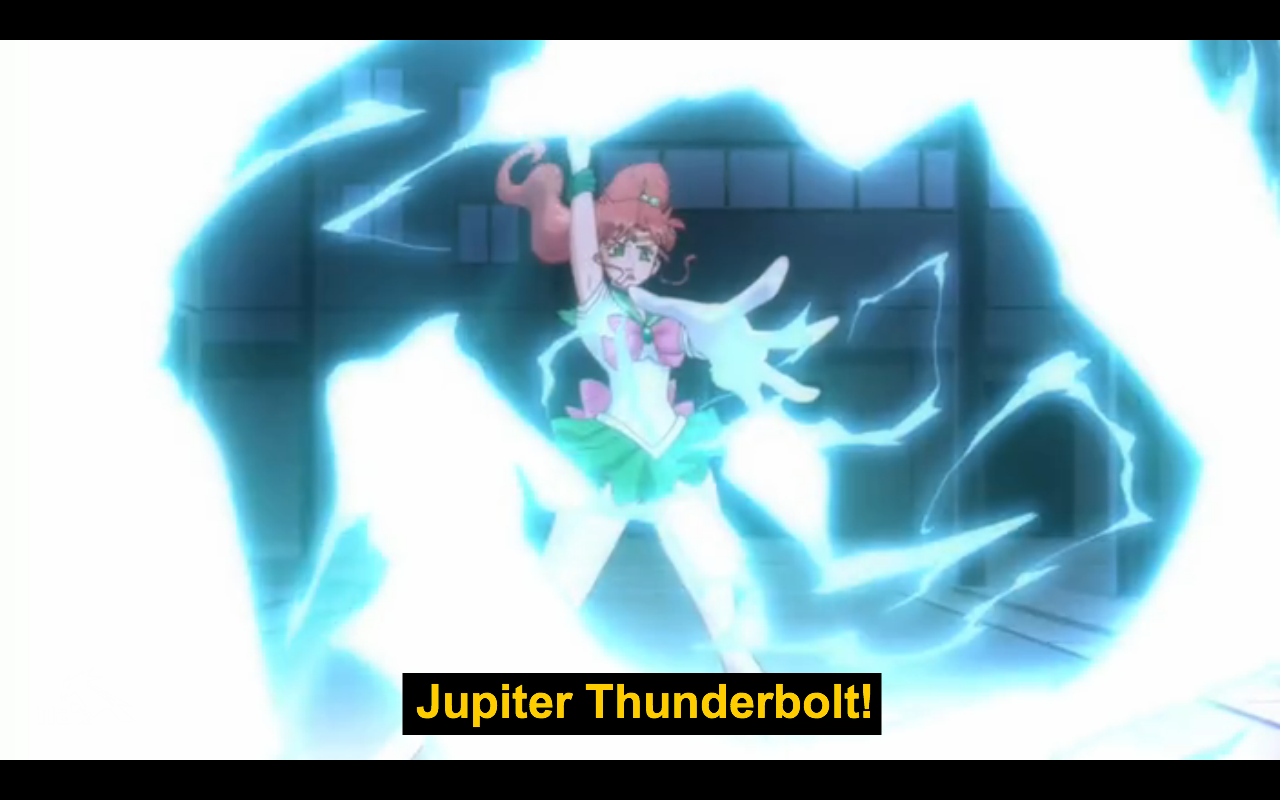 A mysterious girl walks in the rain…

An ordinary day, an ordinary stretch of Tokyo road. Usagi walks blithely to school, distracted by the rain and her exhaustion. She misses a traffic signal. She steps out into the street–and straight into the path of a speeding car!

Just then, the mysterious girl hurls herself in front of the oncoming car and propels them both to safety in the nick of time. Then she gets up, dusts herself off, and casually tells Usagi to watch out for cars. And then she picks up her umbrella and saunters away.

Damn. I mean, damn. Talk about an entrance. Hello, Jupiter! 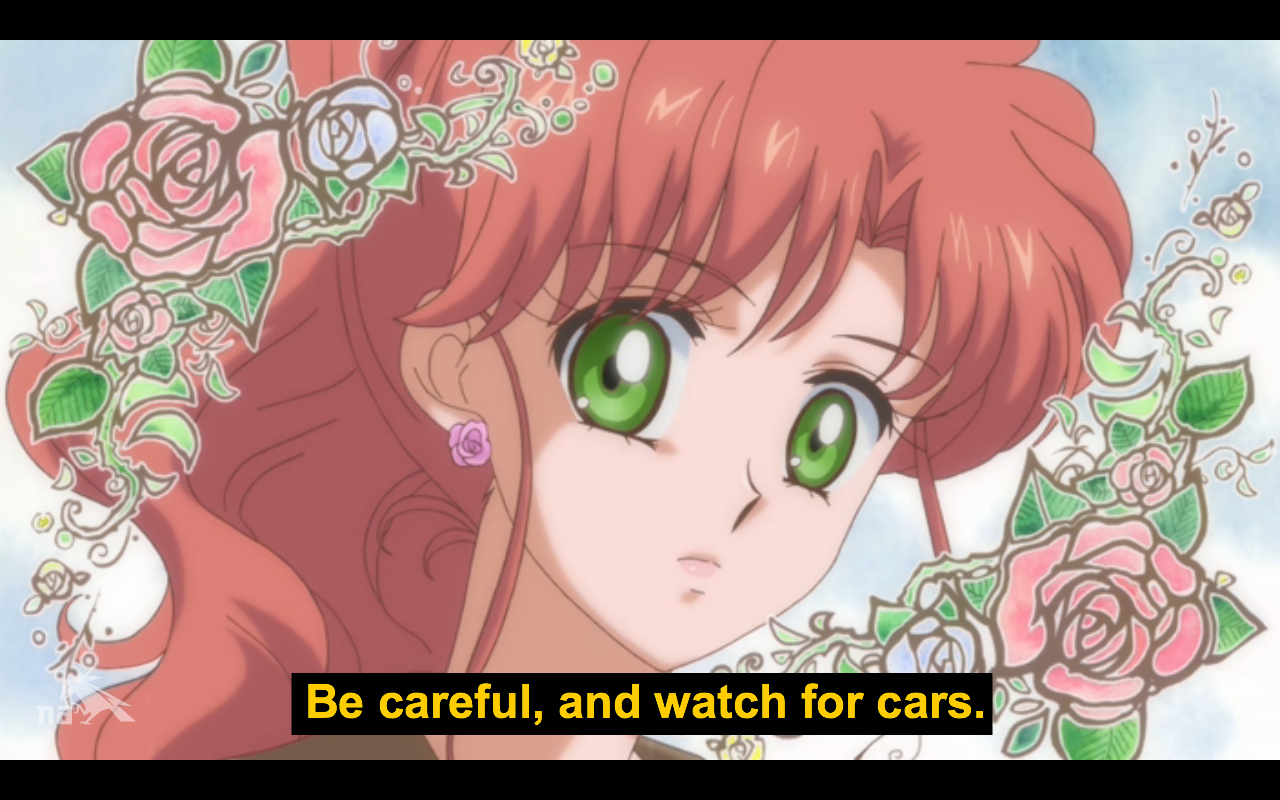 Later, at school, Usagi and Pals are cooing over a picture of Naru in a wedding dress which she got because…wait, so the bride couldn’t make it to the dress fitting–and neither could her husband–so she sent her cousin?  Methinks the translation is lacking here, because unless the bride, her husband, and her cousin are all the same size and shape (hint: they’re not), this makes no sense.  Naru, own up that you’re a “solo bride” already.

In the course of her exuberant fantasizing, she bumps into Makoto (nothing implied there, nope, nothing at all).  Makoto is much more obviously tall in this version, towering over even a male teacher, and even though she’s still pretty willowy, the people around her react as though she’s massively intimidating.  While I would like to criticize the unwillingness to depict atypical female bodies, I’m not sure that’s what’s at work here, given that this is set in Japan with all-Japanese characters.  Makoto is really big for a Japanese girl; it’s not like there are a bunch of 6′ Swedish supermodels setting the standard. 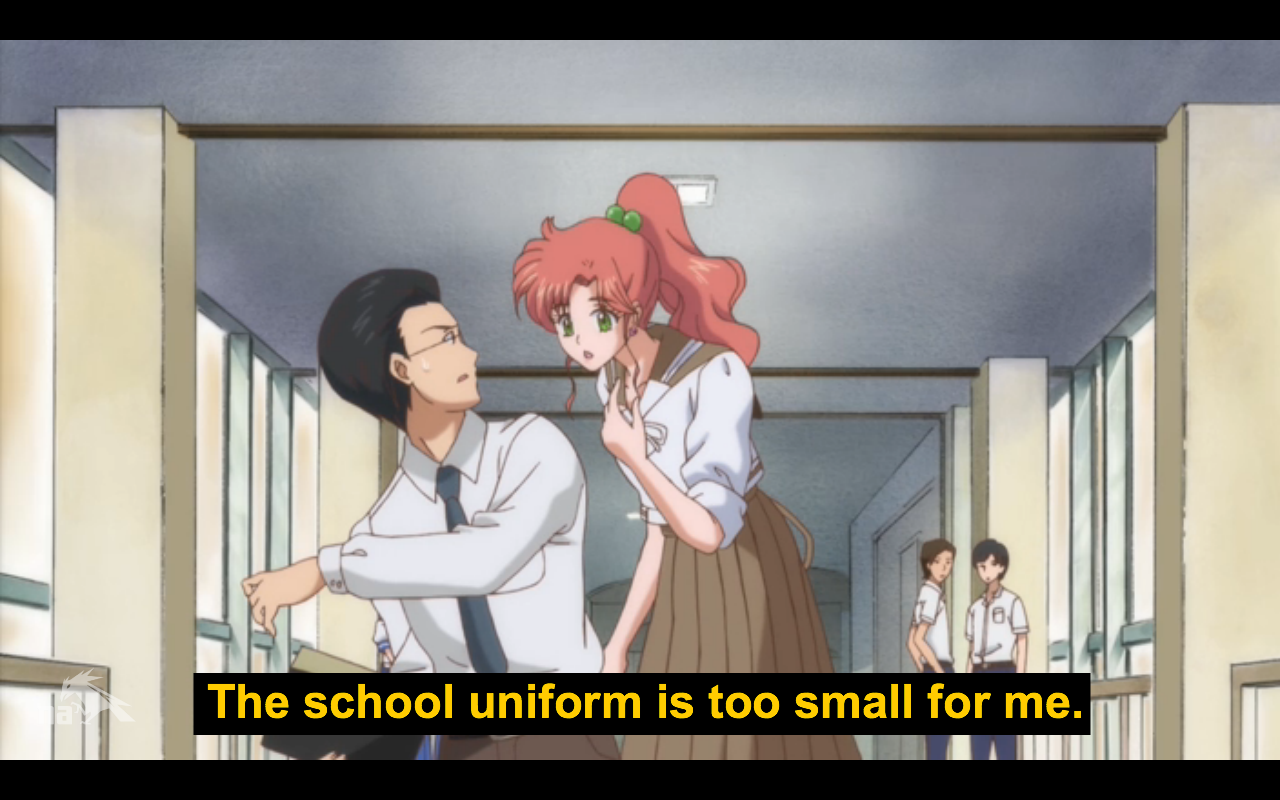 Yet again, a powerfully talented girl is ostracized, and yet again, Usagi comes to the rescue.  This is by far one of the strongest parts of the series so far.  It’s a consistent theme, one that many people can identify with, and has a consistent message of optimism and kindness to bind the characters together.  Usagi, with all her foibles, is so much more clearly the beloved heart of the group.  Even when she is a big brat.

Usagi wheedles a rice ball out of Makoto, and then scarfs it down in a spectacle worthy of an eating contest.  No, only kidding.  She eats it with dainty, polite little bites despite her voice actress valiantly trying to convey gluttony.  Oi!  Animators!  Get it together, would you?  How am I supposed to identify with a character who doesn’t stuff her face?

Still eating like she’s at a goddamn tea with the Queen, Usagi tells Makoto that she’s pretty.  Makoto giggles, and they’re friends.

Actually, this is not so far off.  I’ve made a lot of female friends by complimenting them on their makeup or outfits.  There’s something about that line of conversation that conveys both solidarity in suffering (heels! bright lipstick you’re afraid you’ve smeared all over your face! a hairstyle that will collapse if you sneeze!) and appreciation for that person’s personality.

Usagi takes her new BFF to the arcade (note: great first date idea), and when Ami sees her, there is definitely some jealousy.  Whether that’s a gaming rivalry or a more personal one is up to you.  Whatever it is, it’s eclipsed by another tale of this cursed bridal shop (if you ask me, all bridal shops are cursed.  You stand there looking at 14 different dresses that all just look white, and the sales girl is bubbling that this one is ivory cream and that one is peach vanilla and all it does is make you want ice cream until you are so hungry and tired that you pretend like you can see the difference, and then you can see the difference, and then you realize that it’s all an Orwellian trap, but it’s too late, and you give them your money, and they let you walk out, but you know you’ll never ever be free) (I am wedding planning, in case you couldn’t tell). 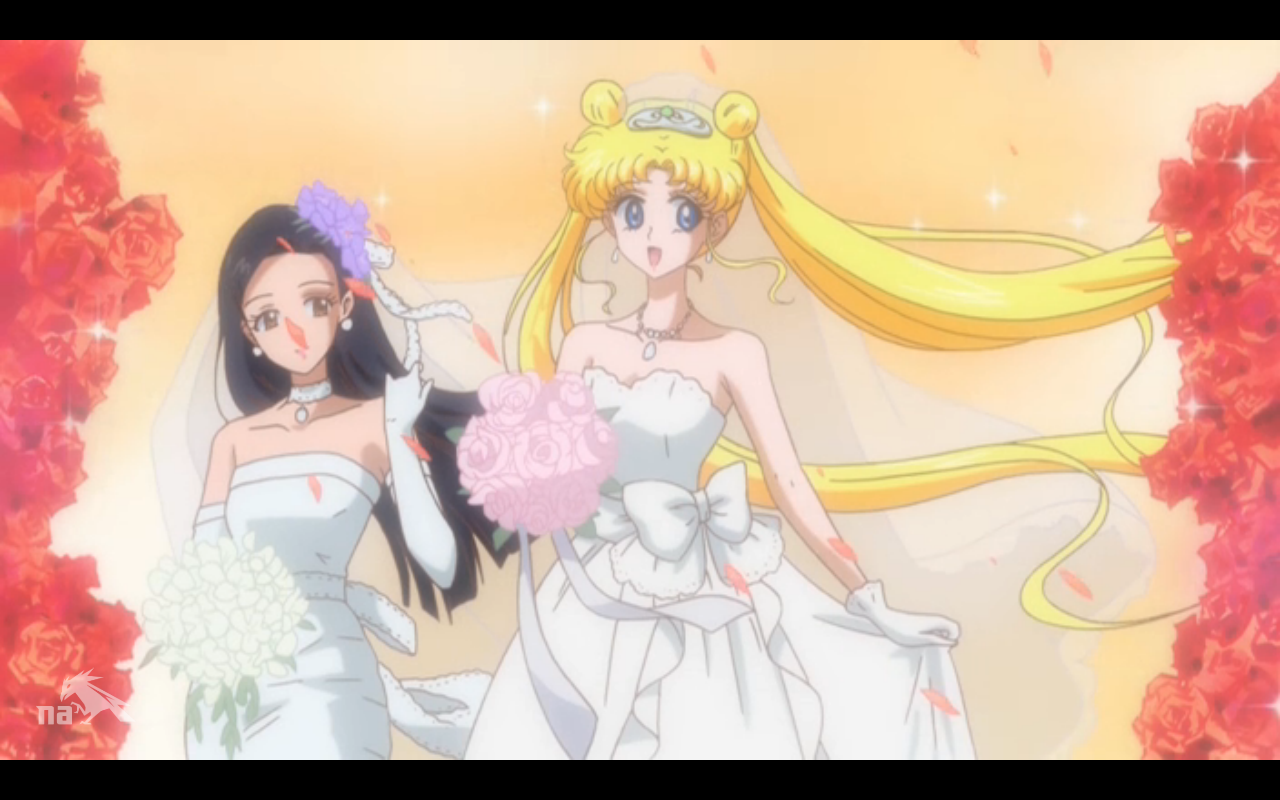 Not pictured: boot stamping on a human face forever. Or ice cream.

ANYway, the girls go to investigate this extra-cursed shop, and hear about a bride-ghost-mannequin that seduces men.  Since I have never seen a man in a bridal shop, this is difficult to imagine, but maybe in Japan it’s different. Fortunately, it’s not so different that this does not seriously weird-out most of the girls.  Rei even asks “what kind of man would be seduced by a bride-ghost?”

Especially this bride-mannequin-ghost (I’m surprised Japanese doesn’t have a single word for this, as it must pop up fairly often).  The way its shoulders shudder? UGHHHH, SO CREEPY.  I had mercifully forgotten how good anime and manga are with mannequins and puppets.  No Western creator has ever matched the terror that Japanese artists can inspire with such alarming frequency and ease. 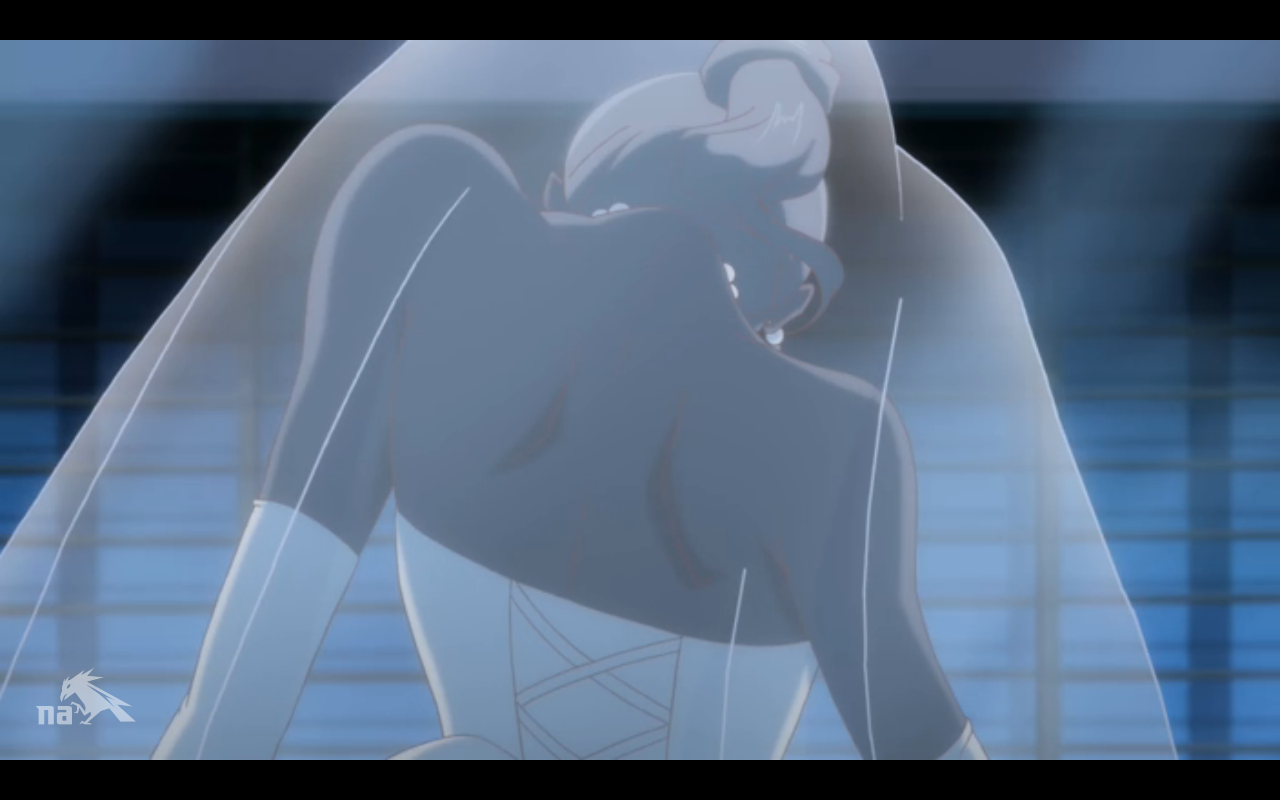 The bride-mannequin-ghost proceeds to entrance Motoki.  This isn’t really seduction, fortunately, just good old-fashioned mental domination.  It’s also contagious.  Motoki tries to hypnotize Makoto in turn, but fortunately Mamoru is there, dressed like a normal human being no less.  He’s going to stop this!

Oh, wait, no he’s not.  First he’s going to go change, and let me tell you, that better be an enchanted tuxedo because putting on white tie is not like throwing on your three-wolf moon shirt.  It takes time.  And then he has to go fetch Usagi–and I do mean Usagi.  He knows Sailor Moon’s identity (eh, it’s not hard to deduce), and more, he knows where she lives.  So he just opens her window, wakes her up, and drags her out into the night without telling anyone.  This is Twilight levels of creepy and I want it to stop.

Luna, upon seeing Usagi run off with some masked guy, promptly and reasonably alerts the others.  They come running to help, and the three Senshi run across Makoto being drained of her energy by Motoki and the bride-mannequin-ghost. 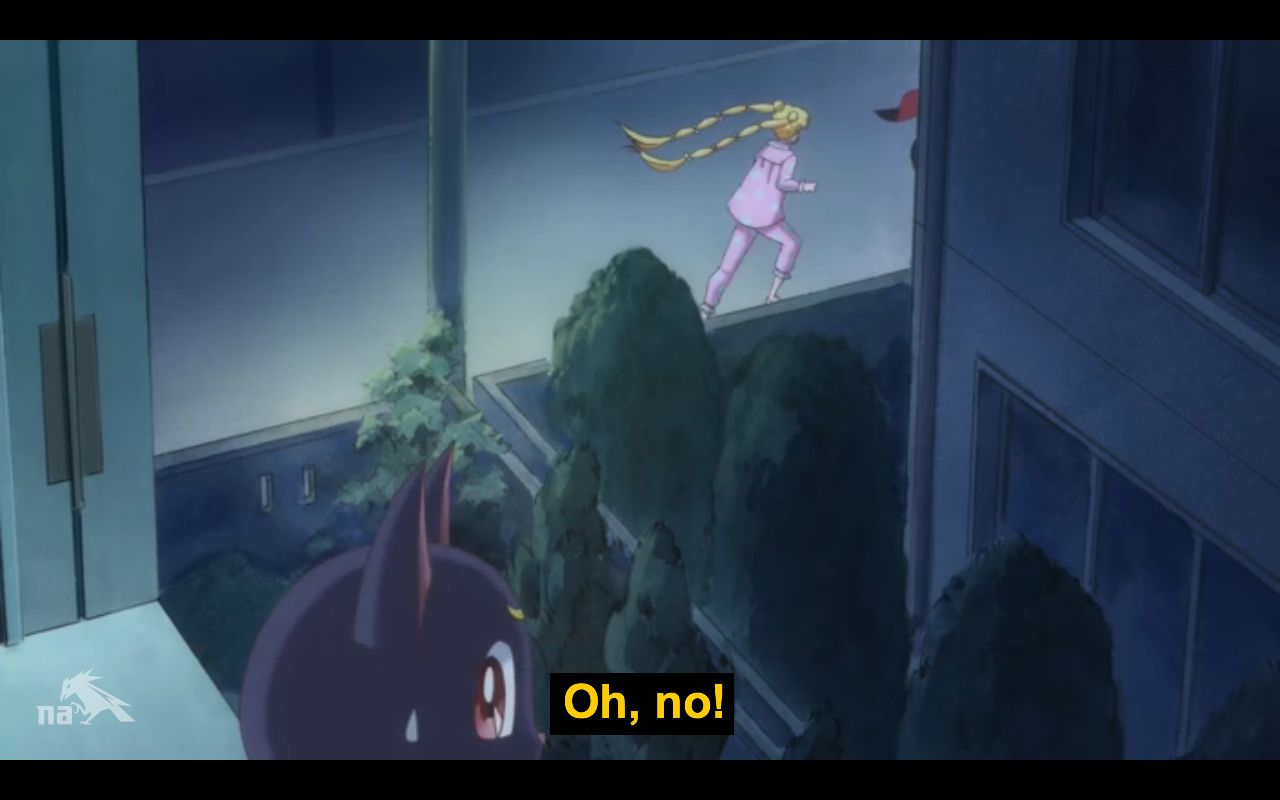 You said it, Luna.

Meanwhile, Tuxedo Mask just…keeps running.  Yeah.  I’d be upset, except I don’t think he should be around middle school girls, or any girls, or even mannequins shaped like girls.

Nephrite reveals himself almost immediately, and taunts the already weak Mako by insisting that love is worthless.  But Usagi appears and tells her to resist, and resist she does.  Mako trades her forlorn, unrequited love for the love of good friends (or “good friends”) like Usagi, and gains the power to transform.  Her transformation sequence is as meh as the rest (why CGI? Why?), but her power has changed. It’s now “flower hurricane,” and it is spectacular.  Sure, the lightning was cool, but they never did enough with the rose theme in the original despite those iconic rose earrings.  Seeing a whirlwind of razor-sharp rose petals?  Hell yes.  And then she brings the lightning on top of that!*  She bursts the bride into nothing, scares off Nephrite, and still has time to inspire everyone with her speech about their new bond, which is “greater than romance.”

Watch out, Ami-chan.  Mako-chan is about to steal my heart. 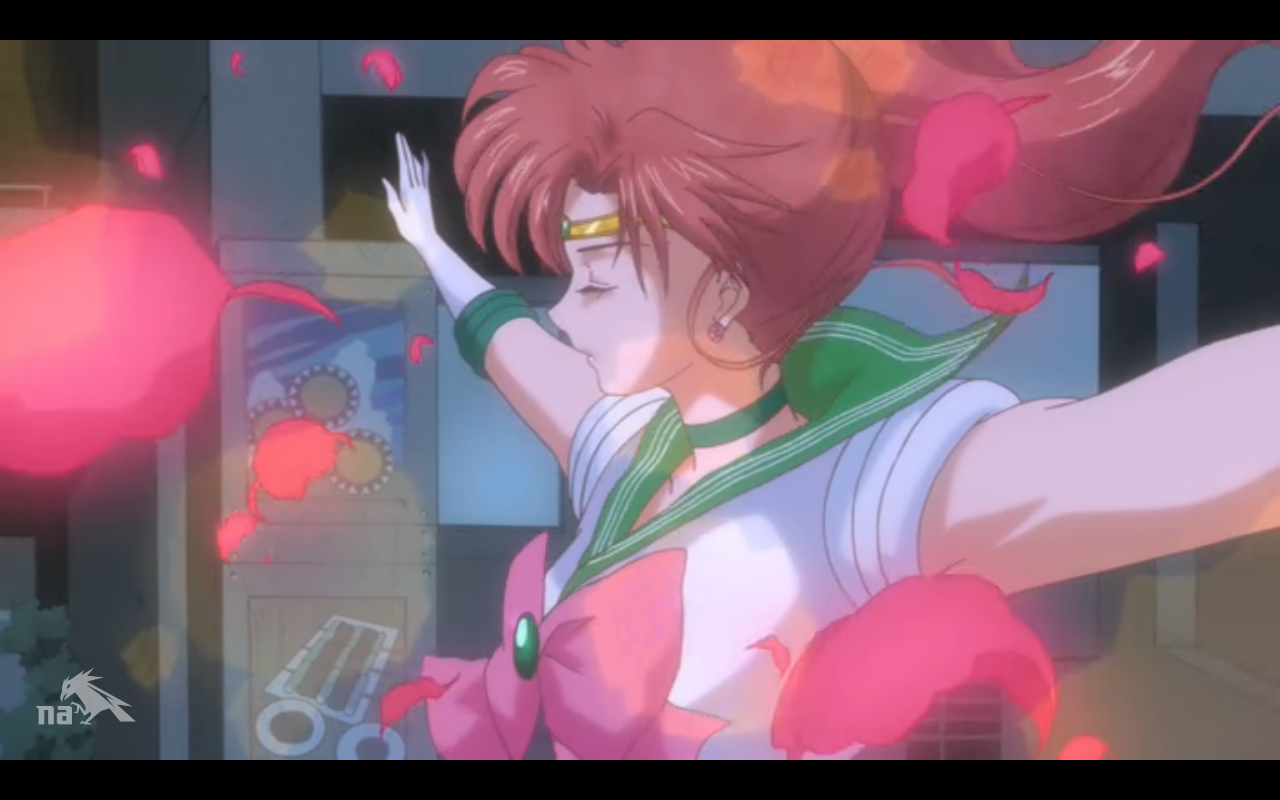 Stand back guys, I got this.

Despite the awesome, I continue to have an issue with the choice of villains.  Once again, although the topics of weddings and marriage are chock full of cultural anxieties and larger questions about gender obligations, cultural imperialism (Ami wants a kimono, Usagi a Western-style dress), etc., the show basically ignores all of that.  And why?  I can’t figure it out.  There’s no reason for this mannequin to be a bride in particular.  It could be some random mannequin.  It could be a stuffed Pikachu.  Sure, they talk about it “seducing” and using love to ensnare people, but that’s not really what how brides function, symbolically speaking.  You aren’t seduced by a bride, and you don’t fall in love with them; you should already be in love with them when they put on that dress.

Mako’s back story only serves to confuse the issue further.  She was hurt before and has a hard time believing in love…so she fears she’ll never be a bride?  A bride who, uh, steals men’s energy?  Wait, is it okay to want to be a bride here, or is that bad.

It was much more effective in the original when the bride plot revolved around Usagi and others wanting to be brides, which taps into the strangeness of people caring more about a wedding than a marriage, and more about a dress than the person they’re marrying.  Bridal culture, and tradition in general, can be deeply weird, and it’s worth exploring.

Though it’s focused on the girls’ friendships even more strongly than in the original, Crystal still lacks a great deal of focus and understanding.  I want to like it, and I’m really rooting for it, but I’m beginning to fear that these flaws run deep.

*We do, however, lose my favorite joke ever. The attack used to be called “Supreme Thunder” which Usagi mishears as “Shu-cream sundae.” Clearly I have ice cream on the brain.