In the very few snippets of Sailor Moon I saw as a kid, I was immediately smitten with Tuxedo Mask, who back then was called Darien, since nobody thought you could put subbed anime on TV for kids.  Those were dark days.  But I digress.  “Darien” was mysterious, handsome, and overwhelming romantic.  Not only did you swoon over someone like that, you wanted to–he wasn’t a bad boy or a tsundere or someone you love/hated.  Tuxedo Mask was pure, true love, and when I started watching the original, I still found something very charming about that kind of innocent idealism, even if I also find some aspects of his character problematic.

Crystal has been a different story so far.  Tuxedo Mask has the veneer of an idealized male lead, but his actions have been suspect at best.  I want to like him, and this is their chance to prove he’s likeable.  So Crystal, let’s see what “Episode Seven: Tuxedo Mask” can do. 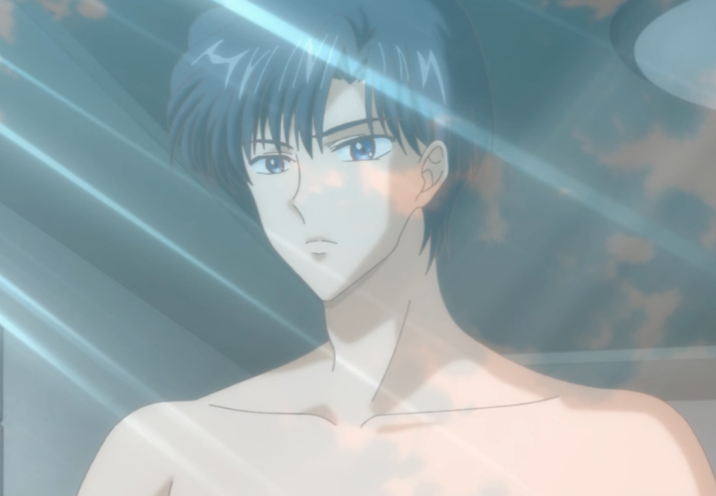 Oh, um.  It can do half-naked Mamoru.  Well that’s different.

Meanwhile, in actual-plot-land, Luna gives Usagi the Moon Stick (could they really not have changed that to “wand”?) and actually tells her it’s a new item.  In the original, Luna also dispensed items, but it felt a little more organic, and less like the Senshi were in a video game.  One, two, and…poof!  Usagi forgot TRANSFORMATION PEN and…Usagi learned MOON STICK! 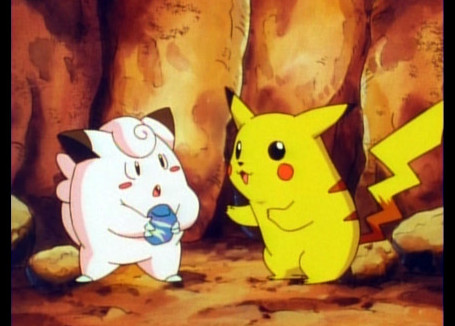 Lacking such important implements, Tuxedo Mask is obsessed with obtaining the Silver Crystal.  So he does what anyone would do and gets in costume to make a statement to the media about his criminal activity and quest for this legendary gem. (Sigh) Sure, why not?  Let’s drop the pretense of media and government working normally in this iteration and have a masked criminal let everyone know he’s trying to find something rare and valuable. I’m sure the populace will be super jazzed to help.  I can only conclude that this isn’t happening on our earth at all, but in a parallel universe in which magical girls, talking cats, monsters, and so forth are actually the norm.  After all, in the original, some seriously strange stuff would happen, all in Juban district, and after the first few times the show basically gave up trying to provide rational explanations.

Luna explains to the Senshi and us that the Silver Crystal has the power to blow up planets “easily.”  It’s like a pocket Death Star!  Awww, first Tamagotchi, then Pokemon, now pocket world-destroyers.  What will they think of next?

In the Dark Kingdom, new plots unfold.  Jadeite is…not there (I hope they’re not done with him, his demise was so important in the original), and Nephrite is still wounded from his encounter with Jupiter, so now it’s Zoisite’s turn.

Zoisite, with easily the best plan thus far, uses TV to convince everyone to look for the Silver Crystal (well, everyone over the age of 40.  Do millennials watch the news? I guess that’s why we see Usagi’s mom affected, but not her younger brother).  When that fails, he uses it to drain everyone’s energy.  The Senshi suit up and rush to stop him. 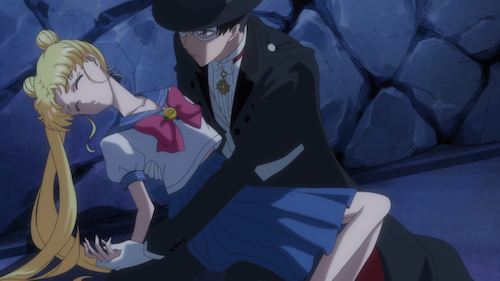 All the Senshi except Sailor Moon, that is.  Angry that the rest of them distrust Tuxedo Mask, she runs away and is caught in the energy drain.  She swoons, and Tuxedo Mask saves her from a faceplant by grabbing her arm.  That probably should have wrenched her shoulder out of its socket, but moving on.  They have the Requisite Anime Moment of Pointless Misunderstanding, with Tuxedo Mask seeming to admit that this was his doing, but only really admitting that he “started it” by declaring his quest to the media. 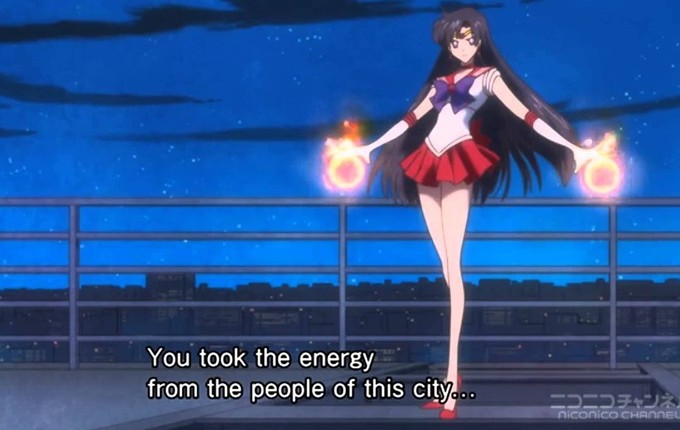 While Reincarnation Romance is taking its sweet time, the others are at the TV station, ready to do battle.  And they are awesome.  Summoning their elements and hurling them in a spectacular display over the Tokyo skyline is magnificent, and they even land a good hit on Zoisite before he retaliates and knocks them back.  While they’re stunned, an even more menacing figure appears. 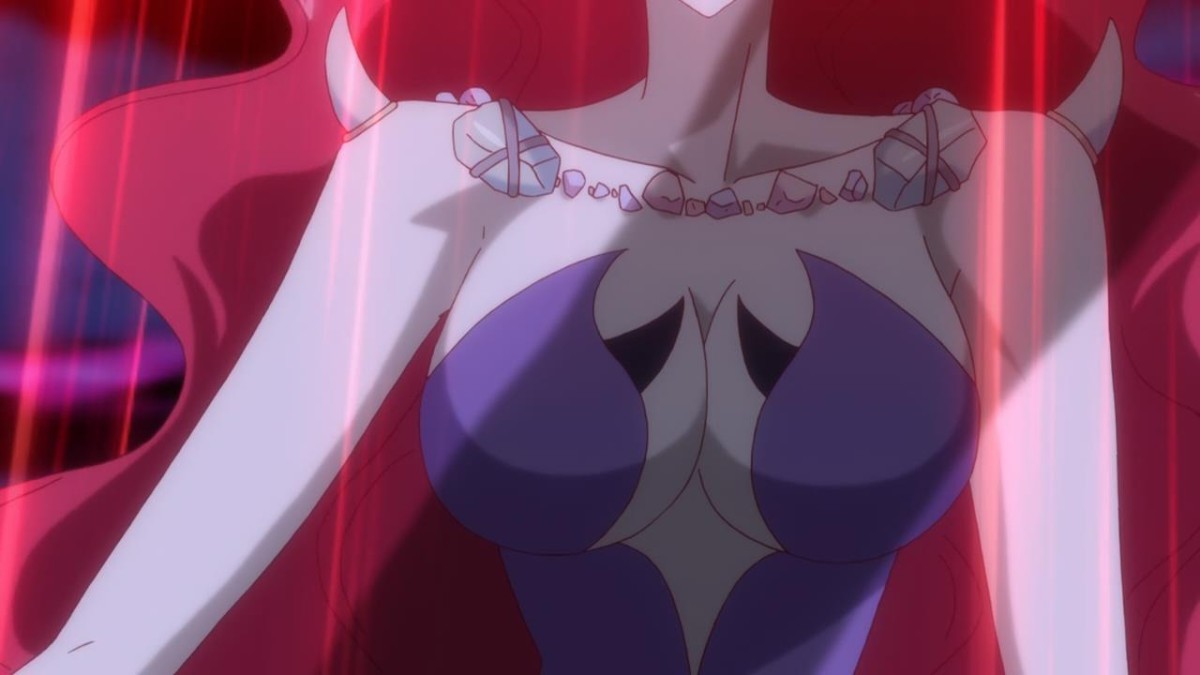 My face is…oh, who cares.

Queen Beryl descends from the sky like a perverse angel, the clouds bloodied in her wake.  Alas, she then proceeds delivers a speech I might have paid more attention to if the first 30 seconds hadn’t been a slow pan of her boobs.  The animators don’t even have the excuse that they were showing off her costume, because her costume is not very elaborate (unless you count the extreme feat of tailoring that kept her from falling out of her dress when she took a breath).  It’s just full on, pointlessly sexualized pandering.  Who is it supposed to be pandering to, exactly?  I don’t think I want to know the answer.  All I know is, they took a character who was, yes, sexualized, but also devious and brooding, and made her sexuality only think about her.  She goes on to oppress the Senshi into paralysis with her vast evil, thereby equating sexuality and wickedness more obviously than was ever done in the original, flattening out much of the complexity.

Still, she is the leader of the Four Kings, and that power counts for something.  It contrasts well with Usagi’s fears of powerlessness, literally and figuratively.  She doesn’t have the brains, the brawn, or the ESP like the others, and she fears that her lack of powers makes her useless.  Tuxedo Mask urges her to transform anyway.

In the original, the moment when Mamoru and Usagi realize that the other is Tuxedo Mask/Sailor Moon is pivotal to their relationship and impressively moving.  Here it’s quieter, more restrained, but I think it still retains a good deal of dramatic power.  Usagi is surprised that he recognizes her (no idea why, after last week, but okay), but she agrees to transform once he reminds her that she has the power of love and laughter that was strong enough to awaken all the others.  She rushes off with this newfound courage, clutching her Moon Stick tight. 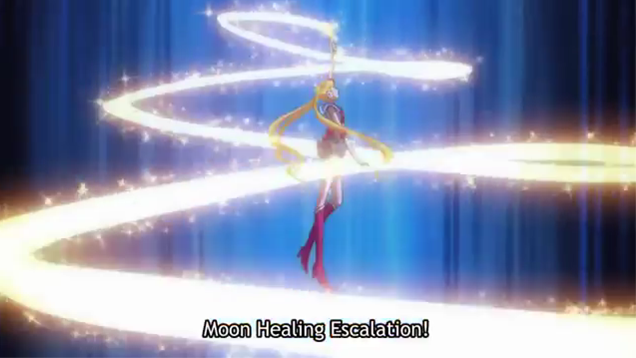 Upon arrival, Sailor Moon uses Moon Healing Escalation, and it’s super effective.  Unfortunately, Zoisite takes the blast meant for Queen Beryl, but it still gets her to retreat.  (Zoisite never seemed the self-sacrificial type to me, except when it came to one person.  Does this mean we won’t be getting the Zoisite/Kunzite romance?)

Sailor Moon flies (flies!?) off, returning energy to the bewildered populace, to collapse once more in Tuxedo Mask’s arms. Then he kisses her when she’s asleep.  On the mouth.  Why does he only kiss her when she’s unconscious?  Then he carries her off.  To his place. 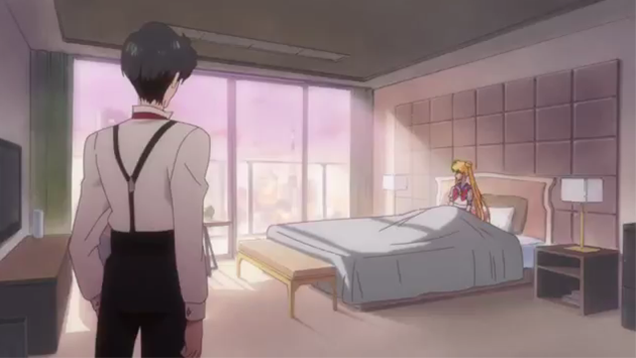 The scene in which Usagi wakes up in a stranger’s bed, not knowing how she got there is just so remarkably inappropriate I can barely express it.  You’d have to be an idiot not to realize what that implies, so are the creators idiots who don’t understand how frightening that could be for a young girl, or are they assholes who realize and don’t care?  We know from last episode that he knows where she lives.  He could have brought her home.  Instead he brings her to his house, to his bed, and when she wakes up he comes over and just stands there.

Maybe I’m being alarmist.  Maybe the mystic bond they share makes it so that Usagi isn’t afraid.  She certainly doesn’t act afraid (then again, she’s 14 and a bit naive).  Maybe it’s okay, since viewers are meant to understand that they have a special bond and would never hurt each other.  I don’t buy these arguments, though.  The narrative doesn’t mitigate this; this instead casts a pall over the whole rest of the episode, so that I can see Tuxedo Mask’s encouragement not as supportive, but as manipulating a vulnerable, uncertain girl.  Obviously that’s not what was intended, but it’s still hard to ignore.

Original Sailor Moon was a real source feminist power and discussion, even the romance, and here they’ve unthinkingly reduced it to the visual narrative of date rape. Crystal, I’m so disappointed.  You have a lot of work to do.