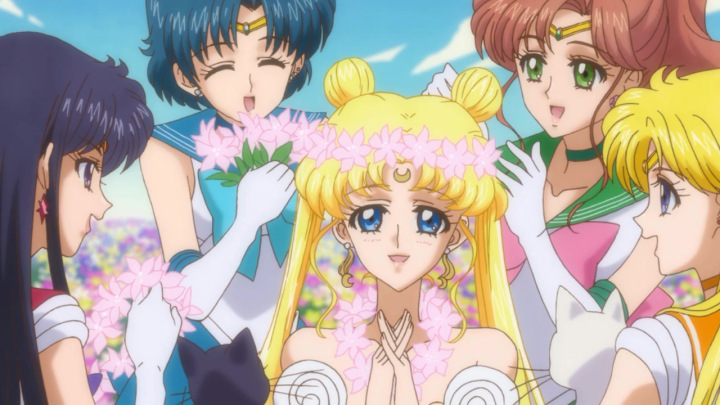 One of the best things to happen to television in this golden age we’re living in is the rise of the serial, and the decline of the episode. Obviously we retain the episodic form, but with Netflix and co., it’s possible to tell a complete story without any need for filler or recapping.

The original Sailor Moon was a product of that byegone era, but Crystal has had the opportunity to change things. It was constrained, especially early on, by the need to introduce the Senshi, but it’s done its best to move away from the repetitive plots and into a much more unified and linear narrative. The short number of episodes has actually helped in this regard, since it forced them to pare down the story to its essentials, and then build up the elements it really wanted to keep, like the focus on sisterhood and reincarnation. It also makes it possible for these past few weeks to be more or less a continuous series of events rather than discrete adventures.

We resume at the cliffhanger from last week, with Tuxedo Mask dying in Usagi’s lap. They both finally recall each other fully, and then he…I think he dies, but maybe he just passes out? Either way, it’s enough to bring Sailor Moon to tears, and her tears summon forth the Silver Crystal. The crystal brings on yet another transformation, from Sailor Moon to Princess Serentiy.

As Luna shouts, “Her body…it’s transforming!” And yes, yes it is. 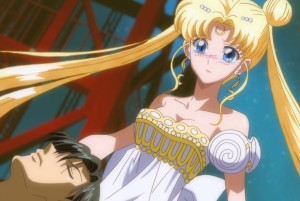 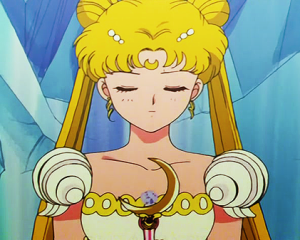 Okay, fine. This is a metaphor for puberty and becoming a woman. It was okay in the original when the girls transformed into leggier, sexier versions of themselves when they became Senshi, and it’s okay here. It’s important to demonstrate that sexuality itself is not the enemy, and thus Queen Beryl and the Senshi must both in some ways have their sexuality be apparent. But must we have so much boobage? Sailor Moon/Serenity/Usagi is a deep breath away from falling out of that gown. It smacks of exploitation the same way that the unnecessary focus on Beryl’s tits did in episode seven.

Minako is also transformed, in that her crescent mark falls away to reveal the Venus symbol, and she gets a tiara like the rest of the guardians. This time around, she is the leader of the sailor guardians (I’m glad they’re giving her a role and more personality, she was always the least defined of the Senshi). I’m glad they also play on the fact that she and Usagi both have very long blonde hair to imply that Venus was always meant to be Usagi’s body double for her protection.

The power of the Silver Crystal is absorbed into Tuxedo Mask, and before anyone can see exactly what it accomplished, the villains create another onslaught. The Senshi defend the overwrought Serenity, but they fail to prevent Zoisite and Queen Beryl from snatching Tuxedo Mask away. 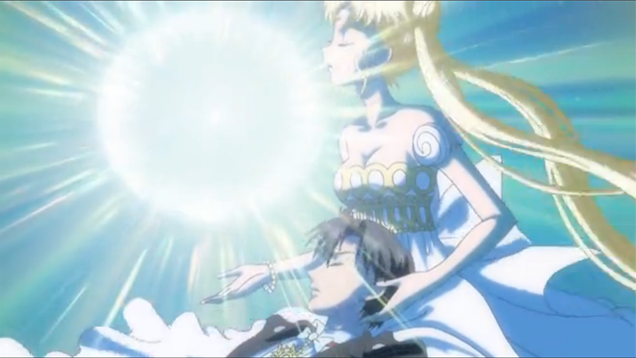 That the villains think Mamoru now contains the silver crystal is a fundamental misunderstanding that goes much deeper than a simple plot hook. This is an excellent and subtle way to demonstrate that the villains are unwilling or unable to look beyond the most obvious manifestations of power to understand its nature. The Silver Crystal is life-giving more than power-giving, and exists to serve beauty and harmony more than any particular whim of its owner.

The aesthetic facet (pun obviously intended) of the crystal’s power is one I particularly want to emphasize. This show is an artistic medium, not just a vehicle for plot, which is why I’ve been so disappointed by some of the imagery (transformation sequences especially). But here, under the gentle light of the Silver Crystal, the music swells, the flowers bloom, and hope is restored to two lovers parted by time and memory. It really is a gorgeous moment. 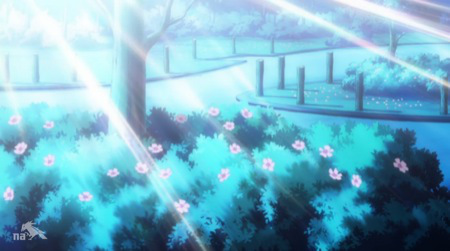 (We’re going to ignore the fact that flowers blooming out of season is probably not good for the plant. It’s a metaphor!)

Gender is also at issue here. The villains assume that a woman gave all her power to a man to save him, and that the man must therefore now have all that power at his disposal. Nope! A woman giving her love and power to someone isn’t a zero-sum game in this show. Usagi still has the crystal and the power, which responds to her love. It’s not a trinket that can simply be given or taken.

Despite the safety of the Silver Crystal, the loss of Mamoru is still a heavy blow to Sailor Moon. Though I’ve disliked him for pretty much this entire series, I confess I was very moved by this sequence (although I’d like to point out it was more because of Usagi’s tragic plight than Mamoru being gone).

A few days later, Usagi is still in mourning and locked away in her room. The Senshi come to offer their help, and find her with her hair suddenly extremely long. After everything else, she’s at a loss for what to do (I don’t think there’s a clearer metaphor for puberty anywhere in this show). 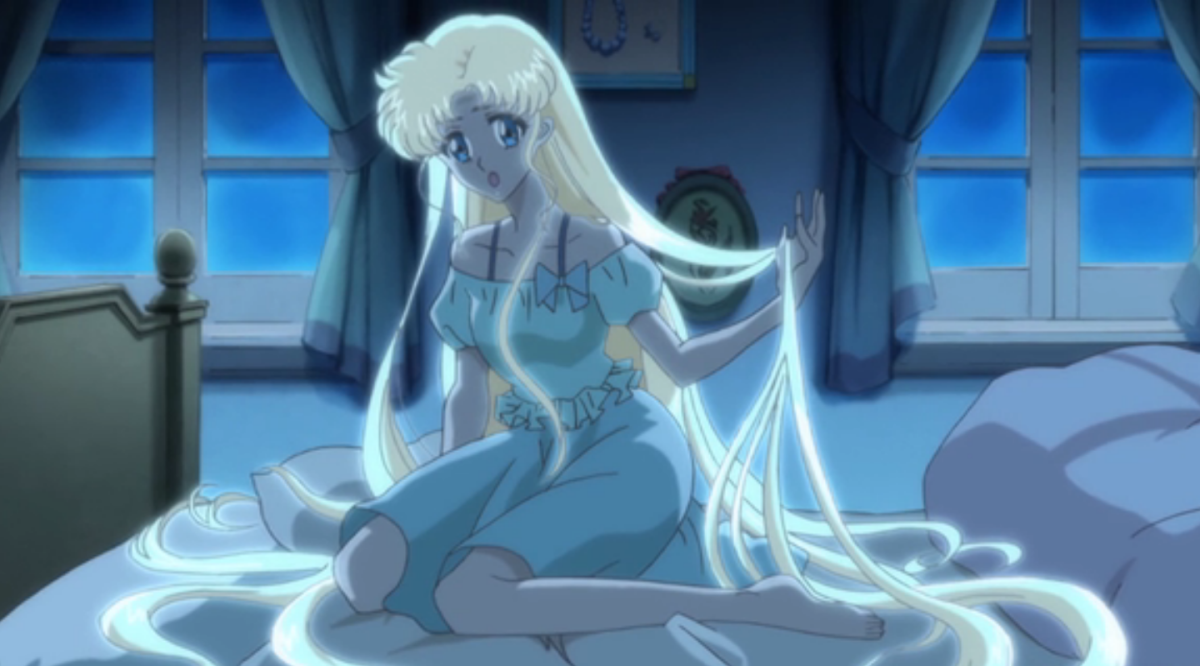 They cut her hair (hopefully that’s not a metaphor, though I guess friends do help you more generally get through puberty) and style it, a nice moment demonstrating the importance of sisterhood. Also the importance of haircuts in dealing with romantic losses. Female readers will know that I am not kidding.

Usagi wonders if, by turning into a princess (physically, but also in the way her friends now treat her and the expectations placed upon her of course), she’s losing her identity. But Rei, channeling her previous incarnation–no, not in the Moon Kingdom, but in the original series–says something kind of nasty. She tells Usagi she’s not a princess, not really. But then she clarifies that she doesn’t have to be the princess from before, or repeat the same mistakes. Much as I miss old, cranky Rei, this one does have a good point, and the others take up the argument in support of Usagi and against her fatalism.

Usagi is encouraged, but it takes Luna to really snap her out of her despair. Luna promises yet more of their history and offers to take them to the moon. The final scene is one in which the five young women all rise and resolve to take on their destinies, and it’s another powerful and empowering moment for everyone. 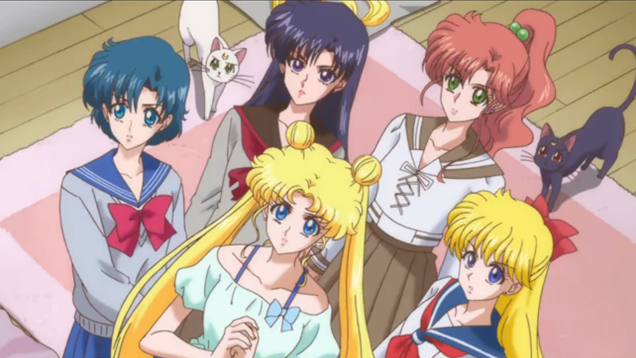 Next week: to the moon! (There are seriously so many good moon-related song lyrics and references that I couldn’t pick one, so insert your favorite here.) 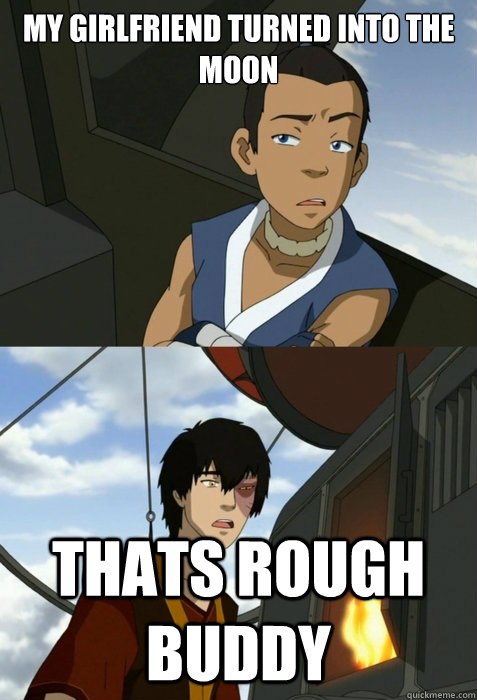 That one’s my favorite.