Apologies for the lateness of this recap. The current episode will also be recapped shortly!

Crystal started off last week so well, so it’s only natural that they’d begin this week with my least favorite holdover from the first series/second season, Usagi’s weird misplaced jealousy of Chibi-Usa’s time with Mamoru. Can’t let my hopes get too high, right? Usagi’s jealous this week of her future daughter spending time with that daughter’s father, since Mamoru is chaperoning a trip to an amusement park—whoa whoa whoa wait wait wait what the hell? Usagi’s mom can’t chaperone her eight year old, so she’s letting her 15 year-old daughter’s high-school aged boyfriend go in her place? Ugh, Crystal! 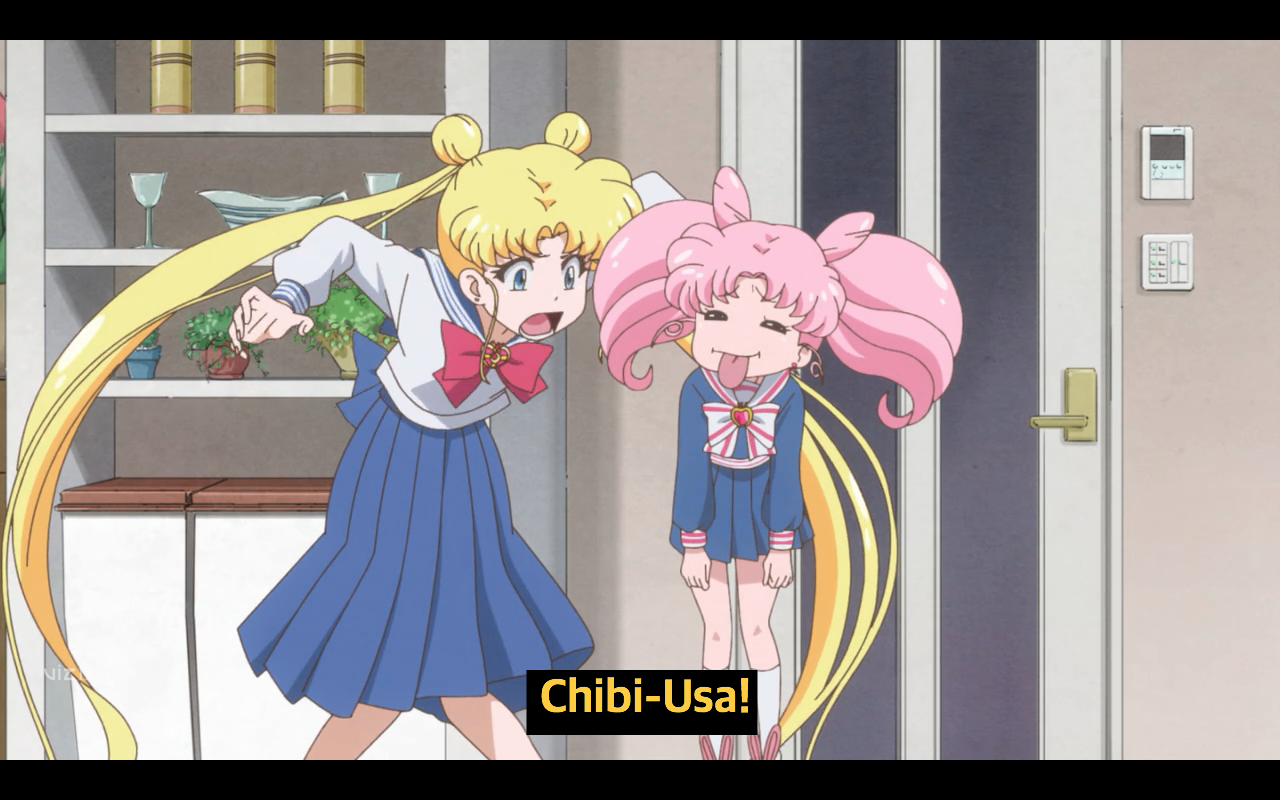 Fortunately, after the break it’s revealed that Mamoru is going so as to be close to Usagi & co. when they infiltrate Mugen Academy. Unfortunately, Mamoru loses track of Chibi-Usa, who goes running off to get her hat. Which blows clean across the amusement park and toward Mugen. All right fine, I’m suspending my disbelief, but don’t make me regret it, Crystal. 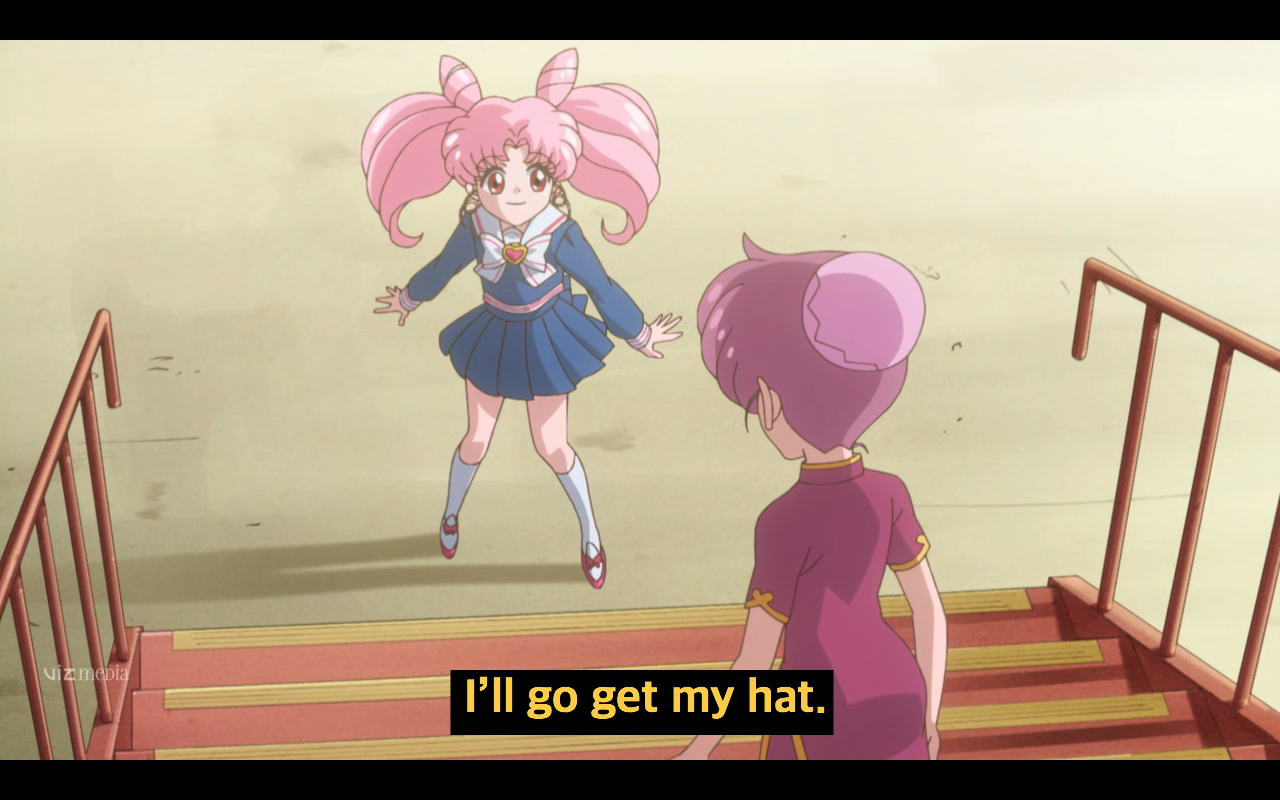 As Chibi-Usa blithely chases after her hat, Usagi blithely transforms herself into a Mugen Academy student to infiltrate the building, leaving behind her friends in what is inevitably going to be a bad plan. Usagi wanders the entirely empty halls, unchallenged and uncertain, until she hears the strains of a melody. Someone’s playing the violin! She goes to investigate and finds Michiru playing by her weird lonesome… 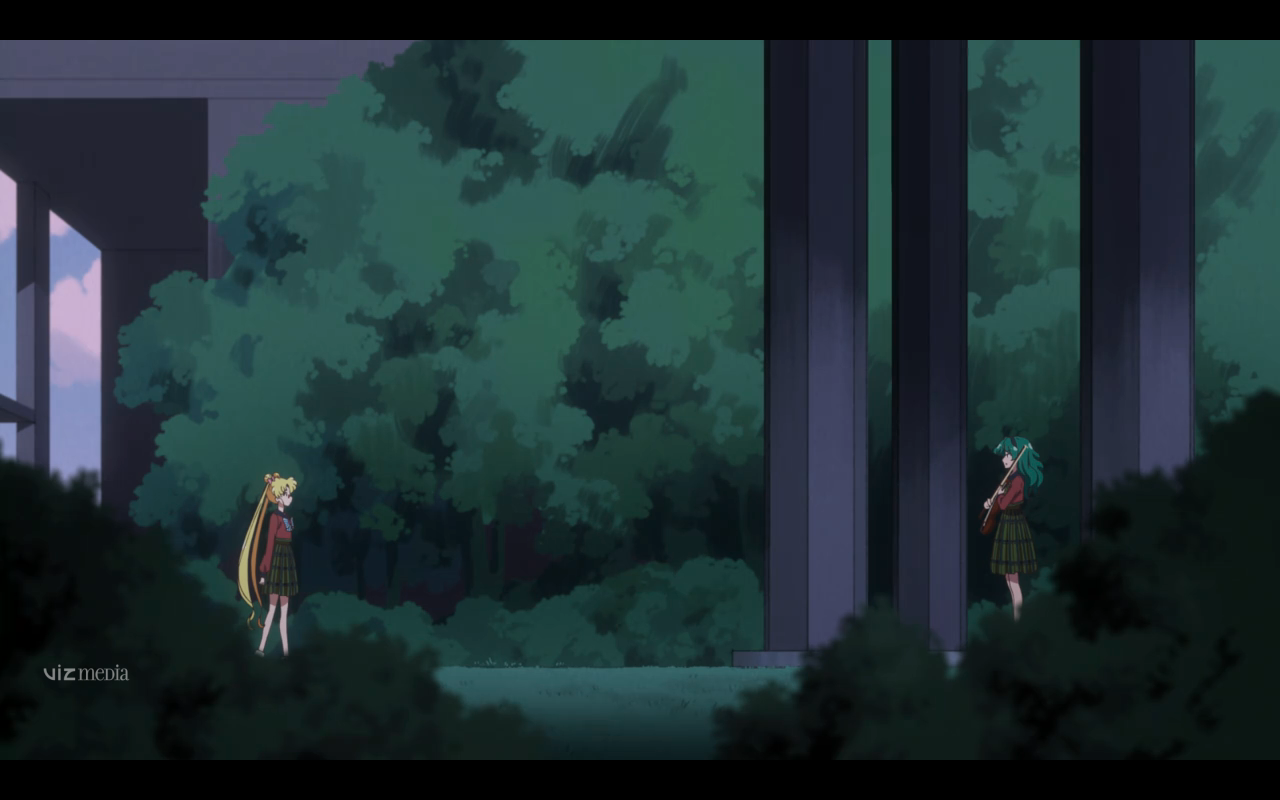 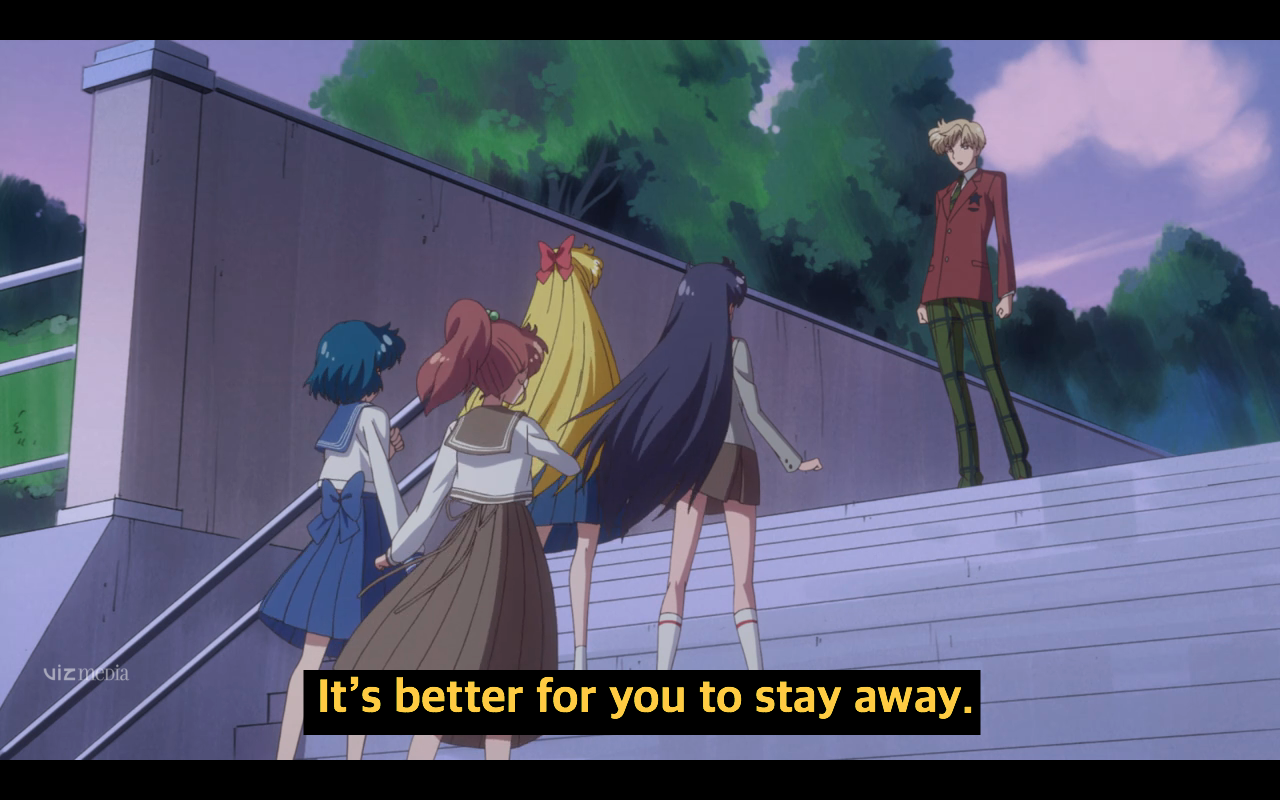 …while Haruka leaps down in front of the Inner Senshi like some kind of private school ninja. (Note: I would pay a lot to send my future kids to a school with ninja training.) Haruka and Michiru both warn our Inners away in the most vague, unhelpful way possible, and Usagi takes off running. She apparently runs around Mugen for so long that it gets dark outside, and, having wasted at least a few hours, finally wends her way out to find Chibi-Usa and a strange girl having some kind of issue.

Chibi-Usa has also wasted hours looking for her hat, telling no one of her whereabouts even as it got dark. Does no one in this universe have a cell phone? Or any common sense? Well, okay, Usagi never had much common sense. They try to help the young girl—Hotaru, obvi—who has literally fallen to her knees with pain, but she rebuffs them. But before they can press the issue, their brooches begin to glow. It’s a Reversion!

Oh god I’m going to have to write “Reversion” for months. 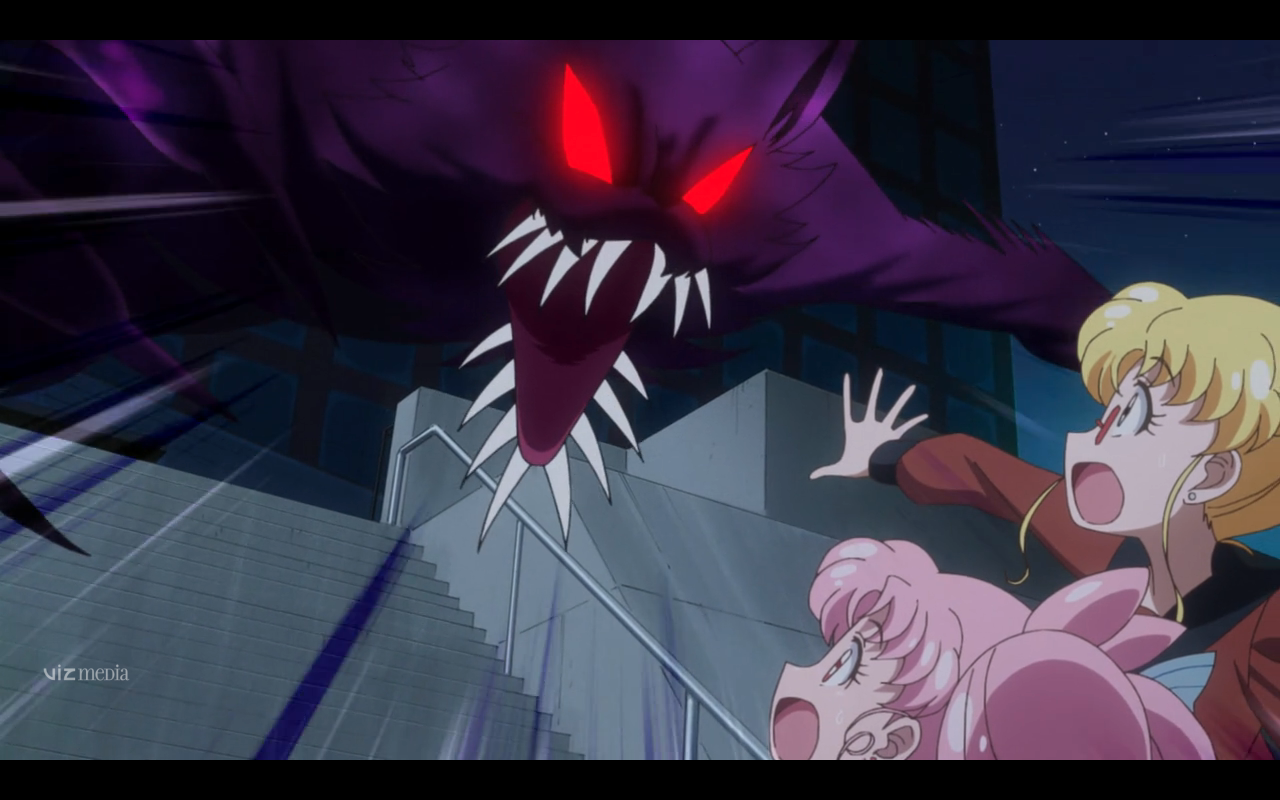 Usagi and the rest transform, and Chibi-Usa’s transformation is super cute, I must admit. But did they have to show everyone’s transformation? I suppose so. Anyway, Mercury uses her 300 IQ and super analysis glasses to come to the radical conclusion that they should watch out for its claws. Thanks, Mercury! Still, the battle is well-animated and the attacks work well in concert. They succeed in defeatinging—oh, thank god, the Witches 5 show up and call it a Daimon, not a Reversion, so now I can sidestep that crap. Anyway, yes, they defeat the Daimon, protect Hotaru, and save the day. 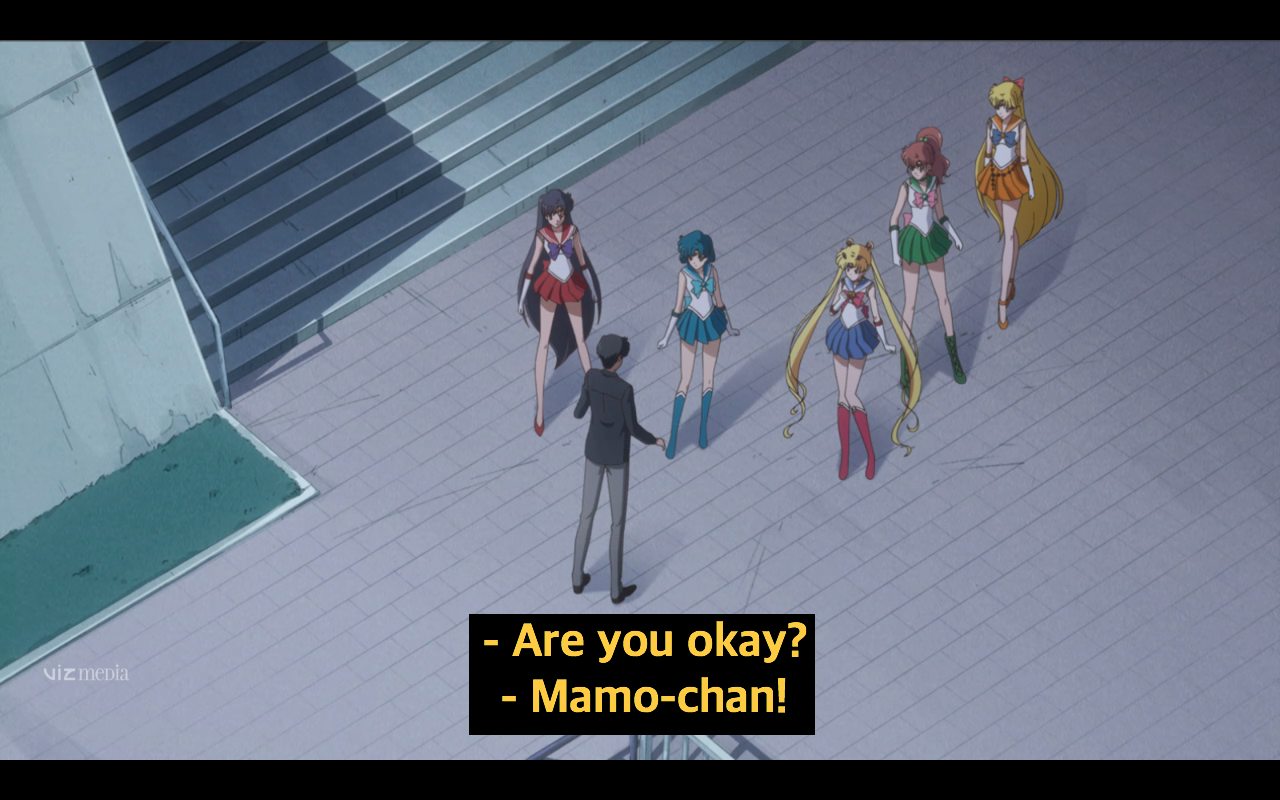 Just in time for Mamoru to show up. Oh, Mamo-chan. You useless ol’ cutie. His contribution—a frantic “are you okay?!”—falls short of even that of the supposed bystander and sickly young girl Hotaru, who manages to rise to her feet and demand a few answers. They dispense with any pretense of ignorance that the blonde girl and pink-haired child are somehow different from the blonde and pink-haired Senshi (that always irked me in the original, so it’s refreshing to see it done away with here), and Chibi-Usa gives a ten-second explanation of their heroic background and mission. Cool! Hotaru is not terribly intimidated by this, and instead focuses on the fact that Chibi-Usa is a bit scratched up from the fight. She extends a hand and before anyone can react, heals Chibi-Usa’s wound. 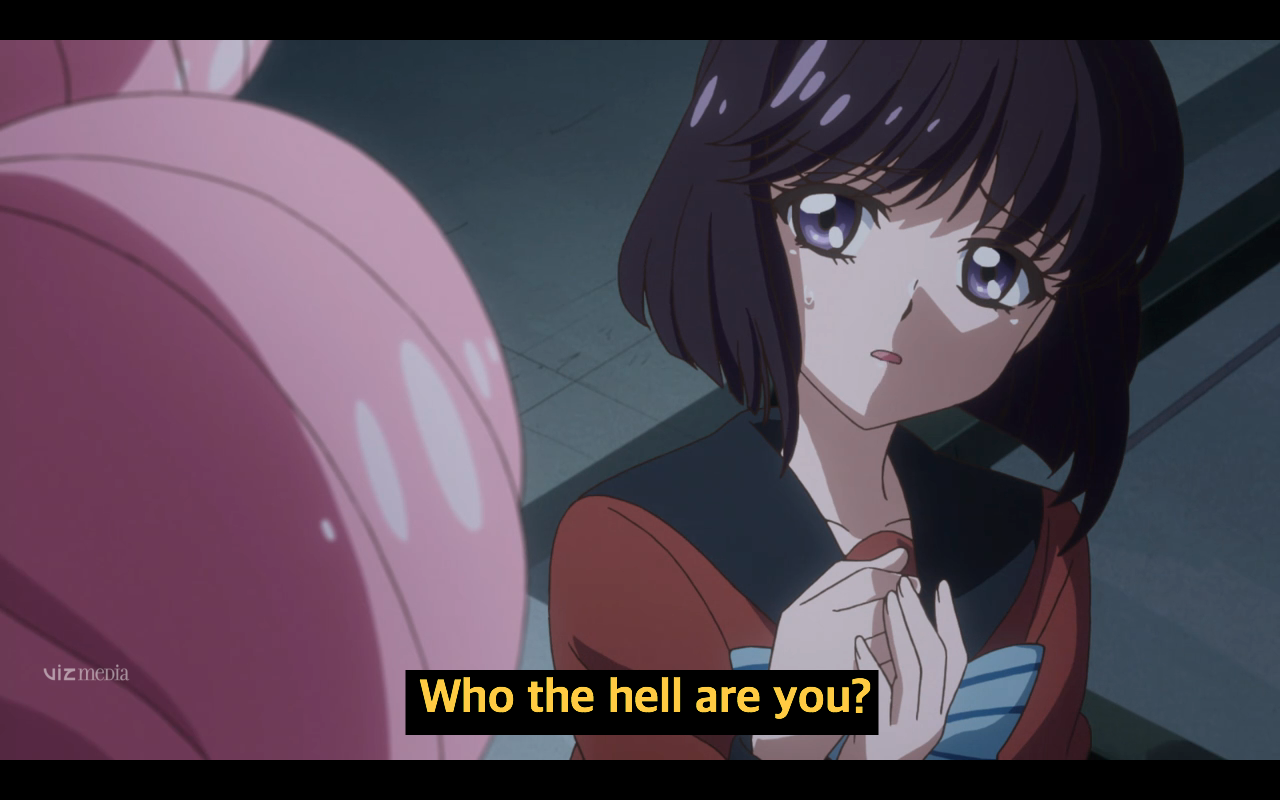 There’s no time to react to this miracle, however, since Neptune and Uranus stand up and make their spying presence known. Not much more than that, though. They immediately flit off into the night, leaving the Inner Senshi to wonder about these new young ladies in sailor outfits. 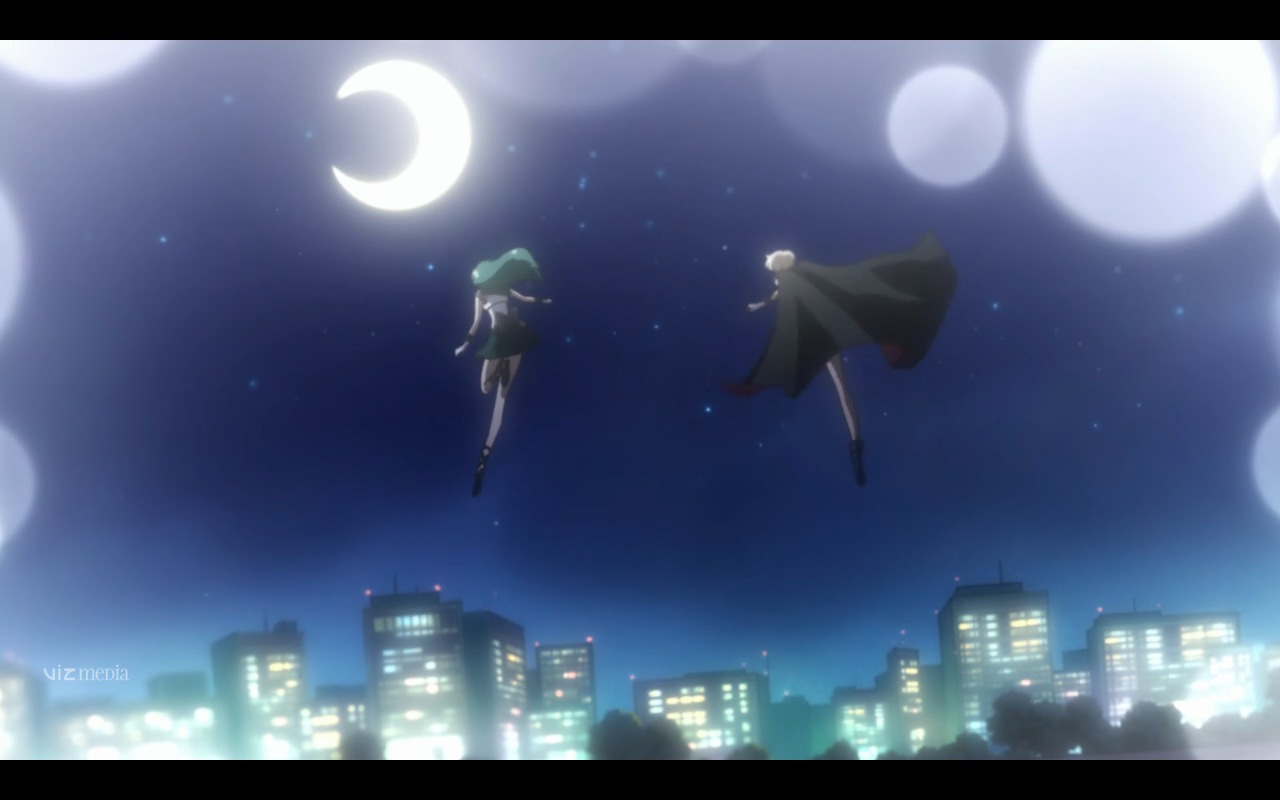 I love that Haruka wears the white mask and cape with her Senshi uniform, just like Tuxedo Mask. It introduces a bit more gender bending here that I appreciate, and also subtly elevates Haruka and Michiru’s romance to the level of Usagi and Mamoru’s. 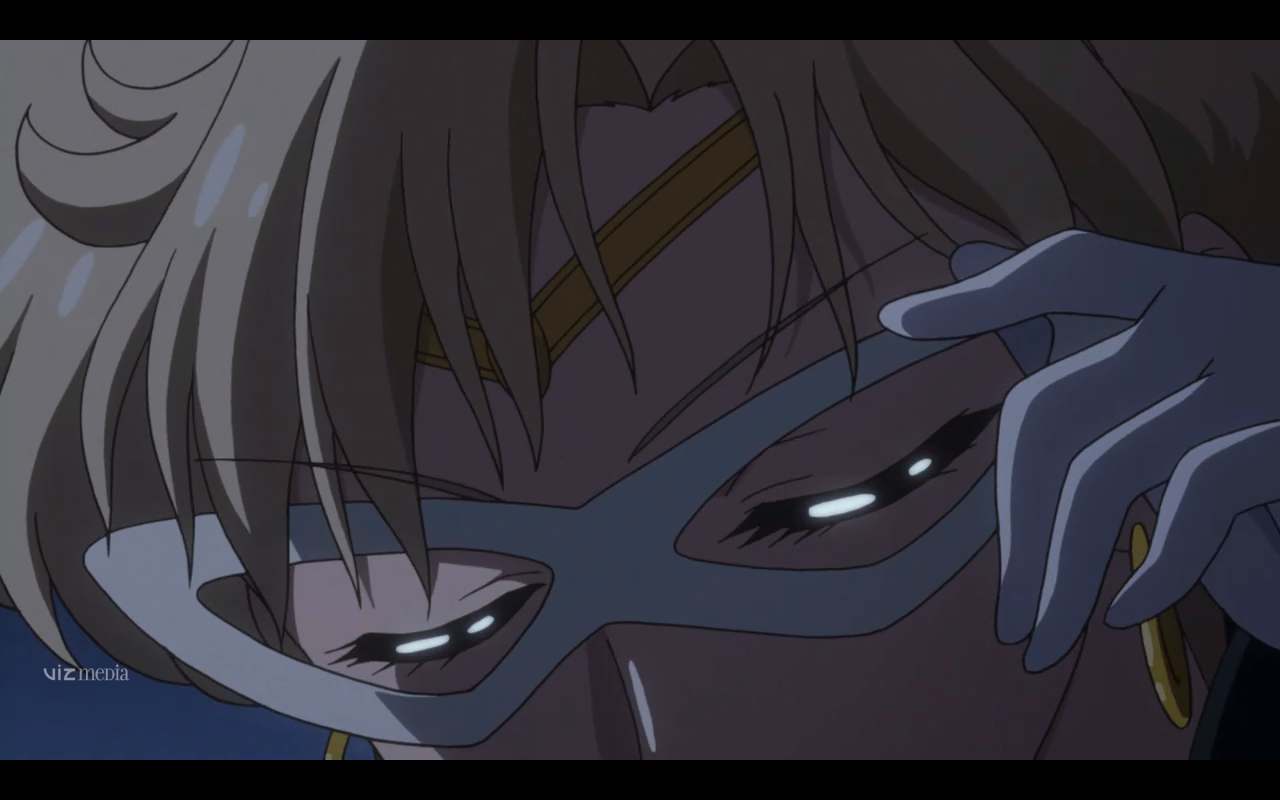 All in all, another good episode, though not without blips of stupidity. I remain hopeful, but still not entirely convinced. So until next week, 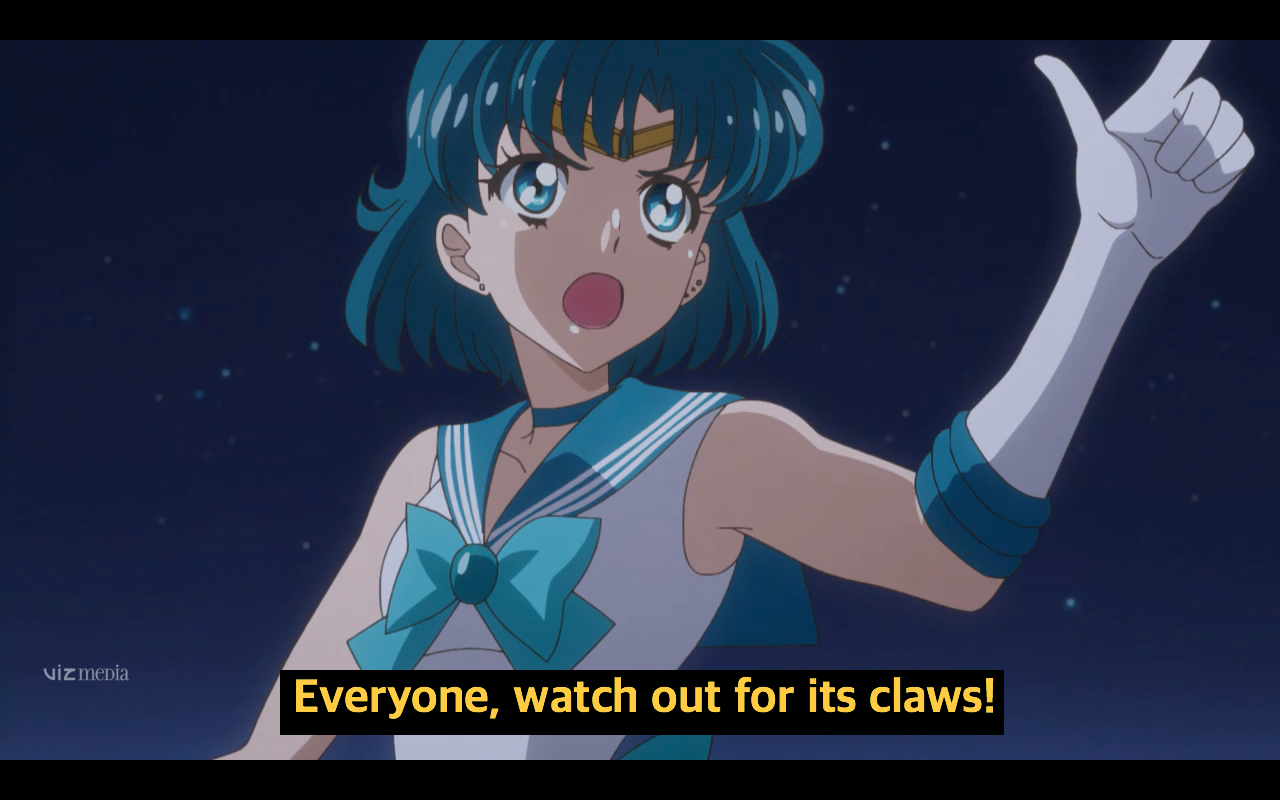